Ashley Benson has been spending a lot of time with rapper boyfriend G-Eazy this week, but looked keen to catch up on some girl time while keeping him close.

The Pretty Little Liars star, 31, was seen strolling in West Hollywood with a pal and her dog on Friday, as Benson sported what appeared to be his leather jacket.

A few sizes too big for her, the jacket hung on her tiny frame, as she added a feminine touch with a fitted white cropped tank. 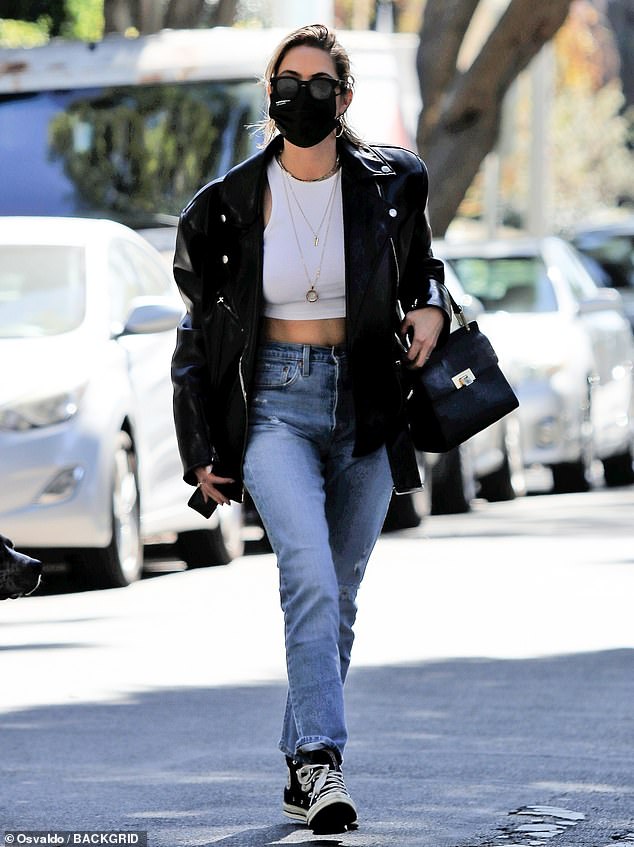 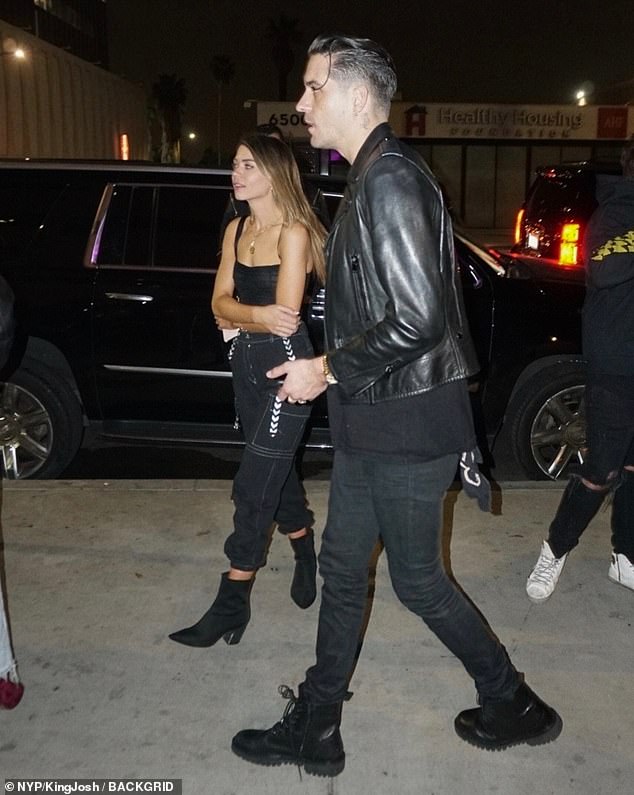 He wears it well: Here G-Eazy is seen in a similar leather jacket with a friend in early 2020

A lover of a classic jeans and T-shirt moment, Benson rocked light wash Levis with the skin tight tank as she flashed her toned abs.

She slipped on her usual pair of black Chuck Taylor’s and carried a black leather purse to stick with the simplistic color scheme.

The Spring Breakers star kept herself protected with a black face mask and threw on a pair of sunglasses, lightly accessorizing with gold pendants and a pair of hoop earrings.

She walked slightly in front of her friend who strolled with a pitbull mix as the pair kicked off the weekend with some fresh air. 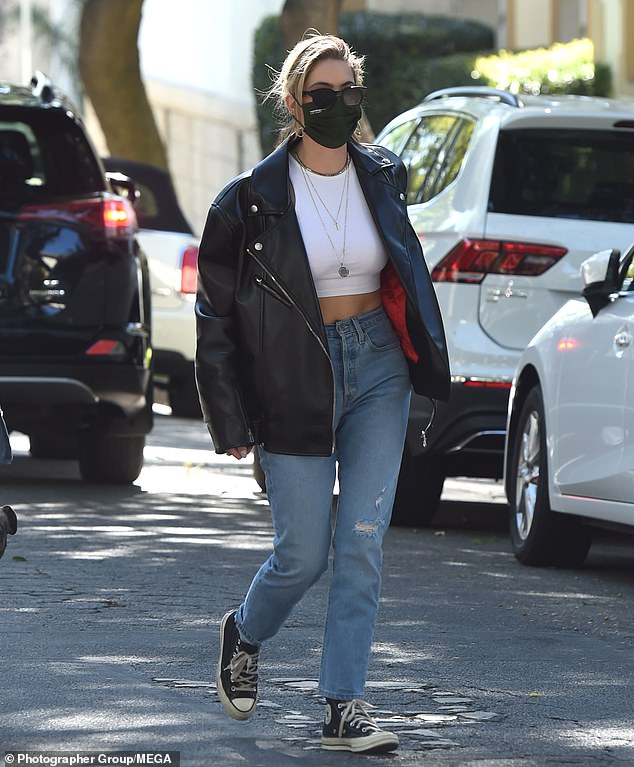 Back to basics: A lover of a classic jeans and T-shirt moment, Benson rocked light wash Levis with the skin tight tank as she flashed her toned abs 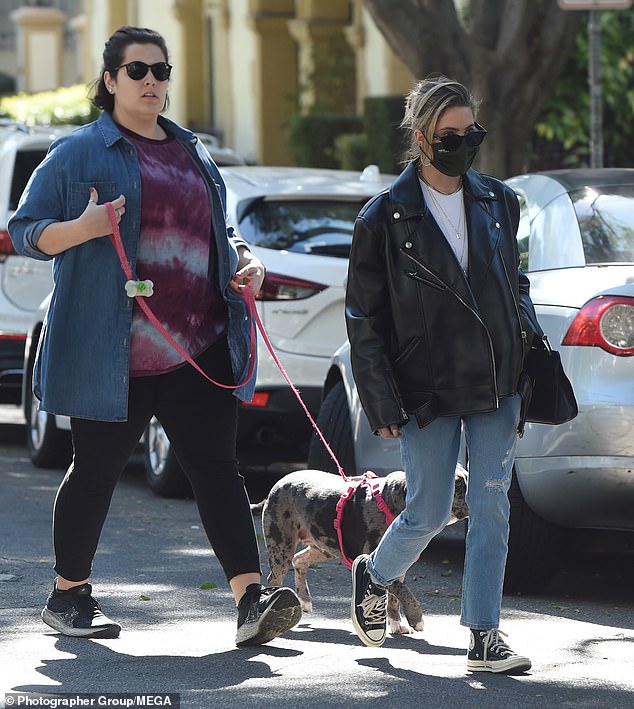 Weekend kickoff: The ladies were seen getting some fresh air in the company of a pitbull mix

Last weekend she and G-Eazy took advantage of Los Angeles County’s newly reopened outdoor dining as they got dolled up for date night at Nobu in Malibu.

The first of many food outings after a two month stay-at-home order, they were seen packing on the PDA outside of a Kreation this week as they fueled up before doing a little shopping.

The pair were first linked last May, after things turned romantic when they collaborated on the track All The Things You’re Searching for on his album.

Though the romance seemed to be confirmed with plenty of hike dates and hand holding, many were suspicious it was a fling for both parties. 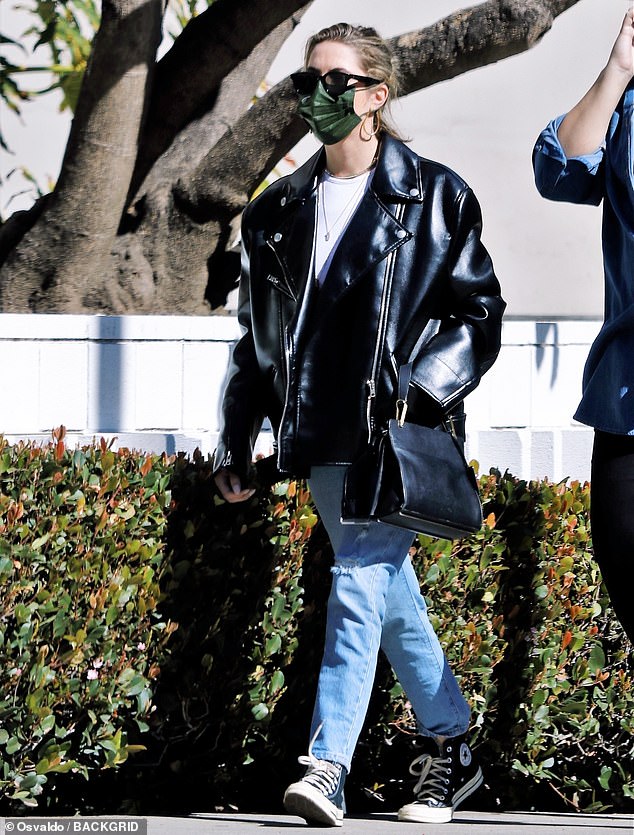 Oversized: The leather jacket was a few sizes too big for her as it enveloped her petite frame 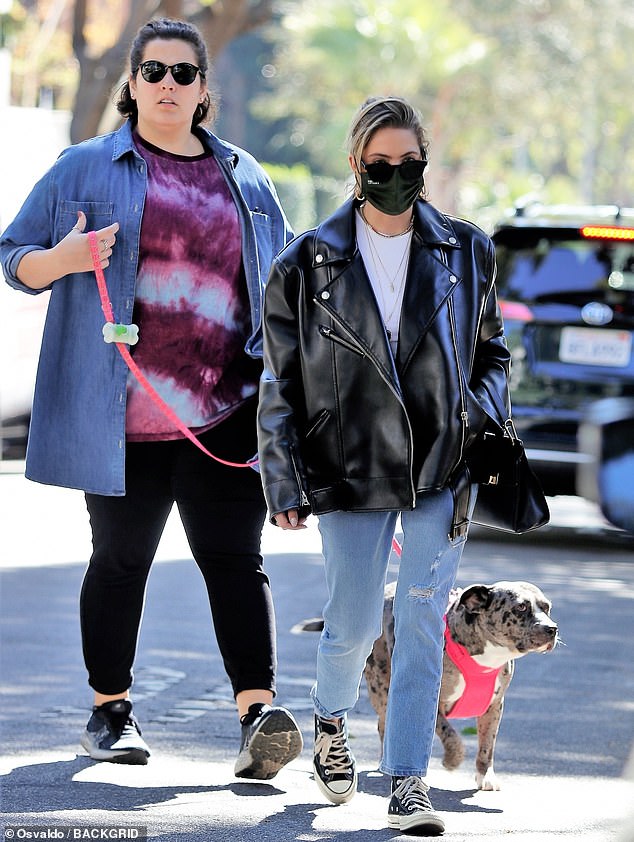 Going strong: Practically inseparable from hear beau of nine months, the pair have been spotted out all over Los Angeles this week

The No Limits rapper had been linked to a handful of pretty flavors of the week – including former Bachelor contestant Sarah Trott – since ending things with Victoria’s Secret beauty Yasmin Wijnaldum last September.

Benson on the other hand had just gotten out of a long term relationship with model Cara Delevingne, making many believe she was just playing the field.

By June he had attended her sisters wedding as her date, and by October they had gone Instagram official and he had begun to talk about Ashley and their relationship publicly, calling her ‘a special one.’ 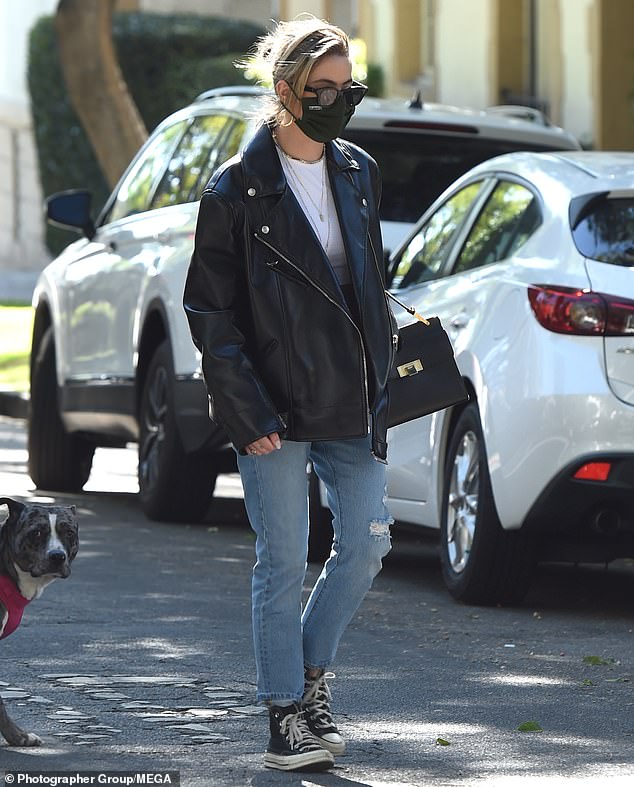 Long haul: Benson and the No Limits rapper seem to be in it ‘for the long haul,’ according to Us Weekly insiders,

A source told Us Weekly in mid January, ‘Friends of hers thought he might just be a rebellious rebound, but there is real chemistry between them, and it looks like they are in it for the long haul.’

It was added that the pair ‘are very affectionate’ and have ‘a ton of sexual chemistry between them.’

Amid the pandemic they have hunkered down together at their respective Los Angeles pads and have traveled together to New York and Miami.

In December he wished her a happy birthday with a social media post as he wrote ‘I love you to the moon and back.’

15 Unbelievable Secrets And Stories From Dentists And Oral Hygienists #Englishheadline

Bachelor star and federal agent Sam Royce is one of Australia's...
Read more