Brittany Cartwright and husband Jax Taylor took their newborn son Cruz for his first trip to the beach over the weekend.

The couple were spotted in Santa Monica along with their former Vanderpump Rules castmate Kristen Doute as they celebrated their friend Megan Johnson’s birthday.

Brittany, 32, and Jax, 41, couldn’t stop smiling as they took turns cradling their eight-week-old and took him down to the water’s edge so he could feel the wet sand under his toes. 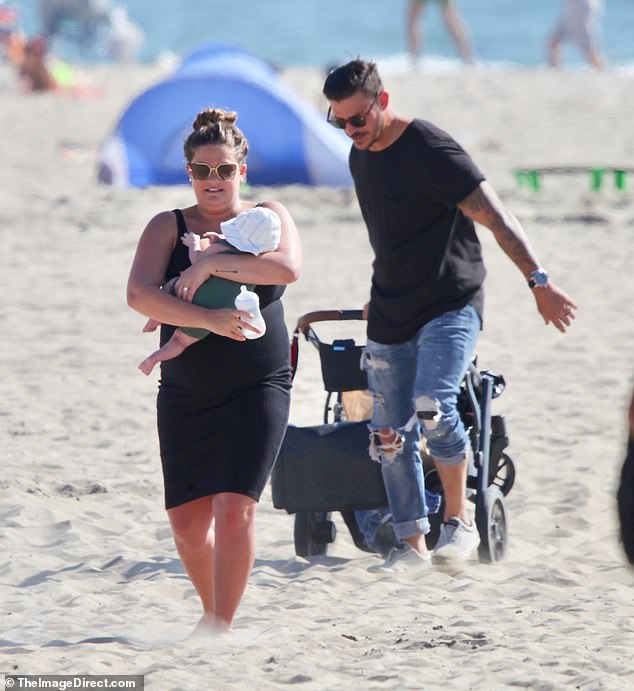 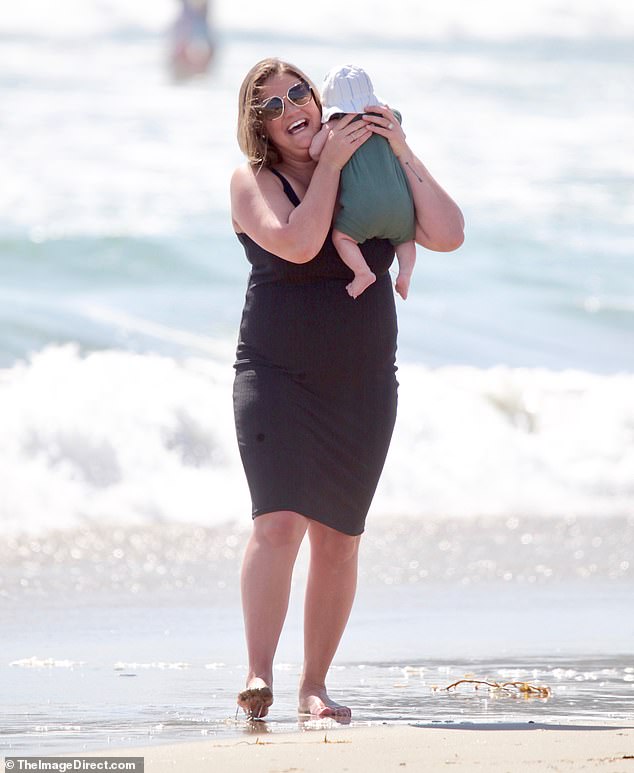 The former Bravo star was seen with boyfriend Alex Menache, who went shirtless in some turquoise swim shorts.

On Saturday, Brittany shared some photos from the beach day and revealed the new parents overprepared for the outing.

‘First beach day! We brought wayyyy too much stuff and carried our stroller through the sand but we still had the best day celebrating @sculptedbymegan bday!! lol’ the Kentucky native wrote alongside a collection of photos on Instagram. 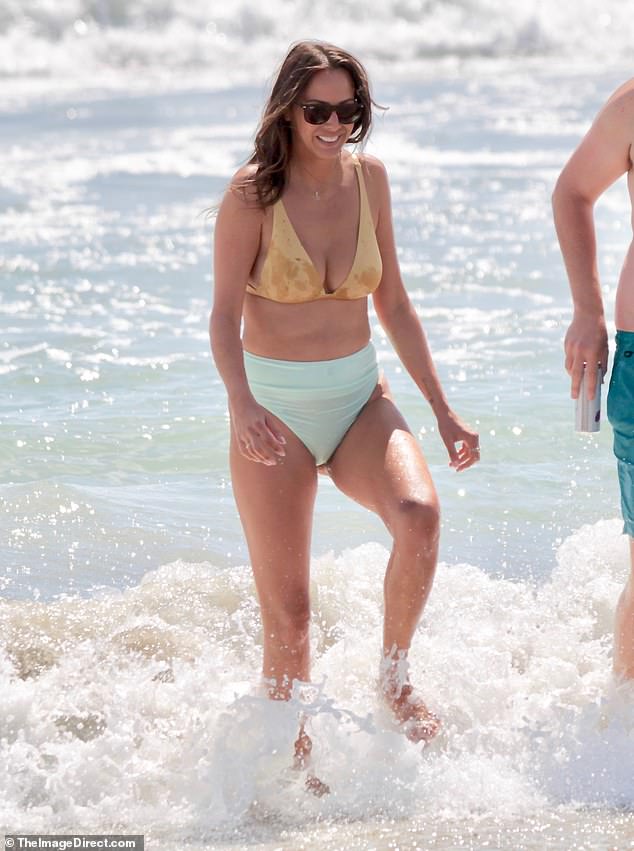 Making a splash: Former Vanderpump Rules star Kristen Doute was also at the beach party for one of their friend’s birthdays 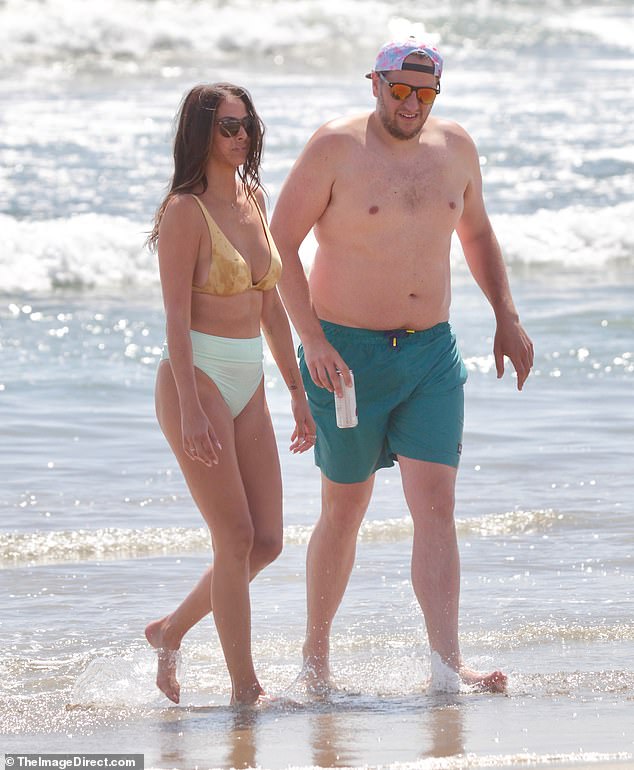 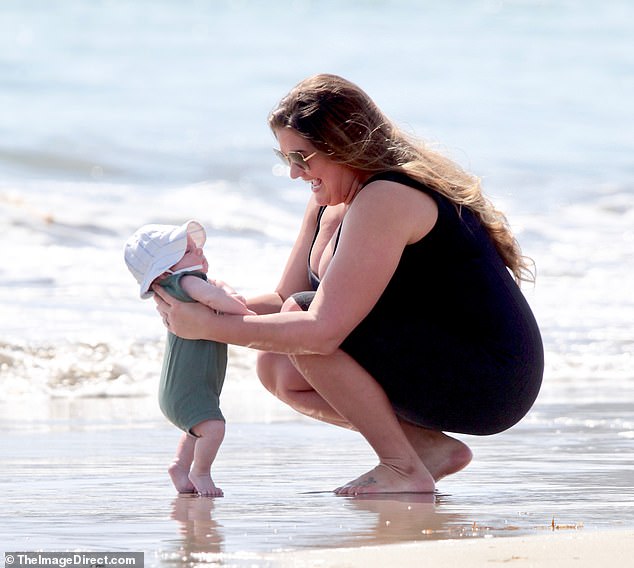 First time in the ocean: The Kentucky native took eight-week-old Cruz down to the water so his toes could touch the wet sand 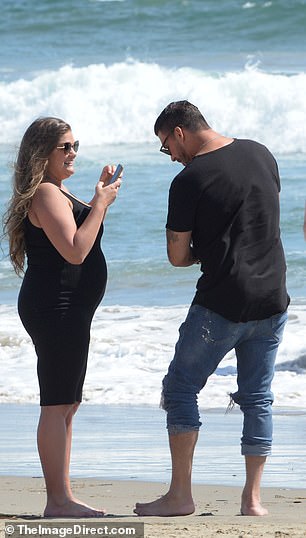 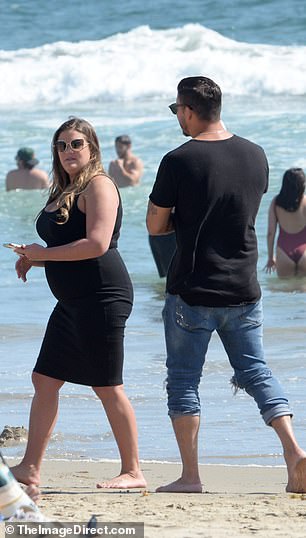 Last month Brittany opened up about how the long process of healing from giving birth.

In a candid clip of her standing in front of her mirror, the former Sur waitress told fans she’s ‘got a long way to go’ but is finally feeling more like herself.

She turned to the side and ran her hand over her tummy to flaunt her progress in the mirror. 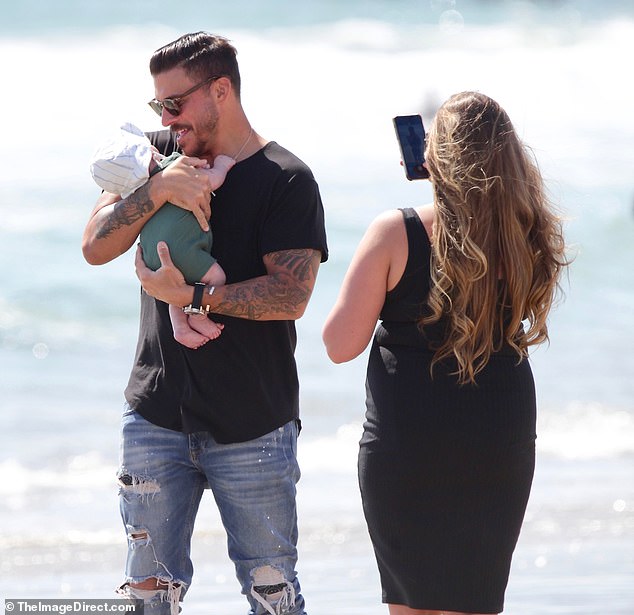 Doting dad: The couple snapped photos of each other as they cuddled their little boy 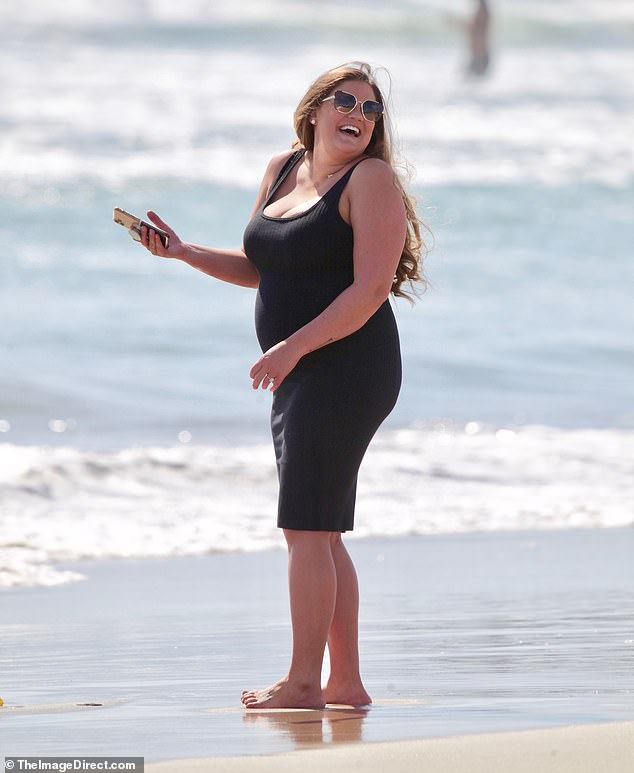 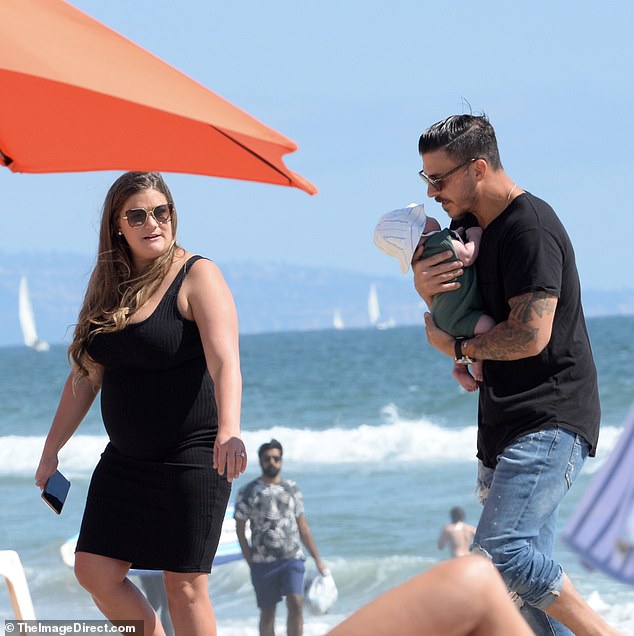 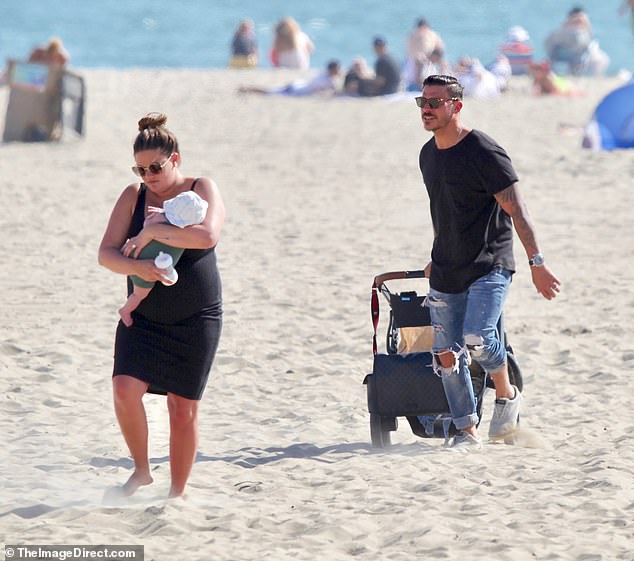 Well prepared: The couple came to the beach with a stroller and diaper bag 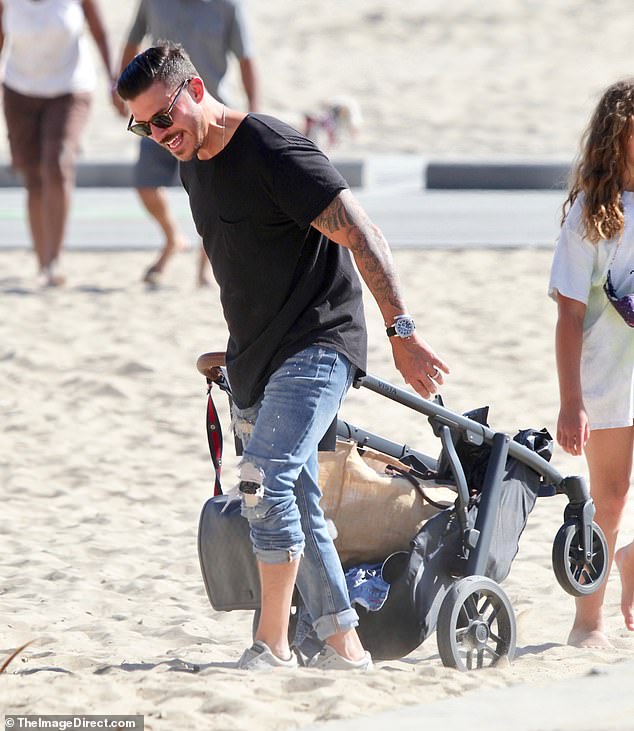 He’s got this: Jax took on the tricky task of getting the stroller across the sand

‘Got a long ways to go, can’t wait until I can workout at six weeks,’ the Bravo alum went on, adding: ‘Starting to feel like myself again, not so sore and just loving my baby.’

‘I think some of the craziest things about post partum for me has been… just how long you bleed and how long you’re sore for.’

She wasn’t shy about body talk, telling viewers: ‘Sorry if this is TMI for some of you but, I know there are a lot of new moms out there or there’s a lot of pregnant moms who follow me and it’s just been a learning experience.’

‘It’s the happiest time of your life but nobody talks about what your body goes through,’ Brittany went on, hoping to help fans by being open about her physical changes.

‘It is very hard on your body and I didn’t realize how sore I was gonna be or how long I was gonna be in those ugly diapers and pads,’ Cartwright said with a laugh.

Mixing it up: Kristen, 38, was seen in a mismatched bikini, featuring a plunging gold top and high waist aqua blue briefs

Then she offered a word of encouragement, telling followers: ‘Even though its all worth it, you really have to just push through those moments.

‘I’m finally a little over five weeks post partum and I’m starting to feel good. My soreness has gone down a lot.

‘So hang in there new mommas! You got this, you know nobody talks about these things but you’re definitely gonna go through them. But it’s all worth it because these cuddles are the best thing ever.’

The new parents welcomed their baby boy on April 12 and announced the happy news to social media.

‘Yesterday, April 12th at 1:51pm, our lives changed forever in the absolute best way possible. Our beautiful son Cruz Michael Cauchi was born and we have never been more in love.’ Brittany wrote in her post. 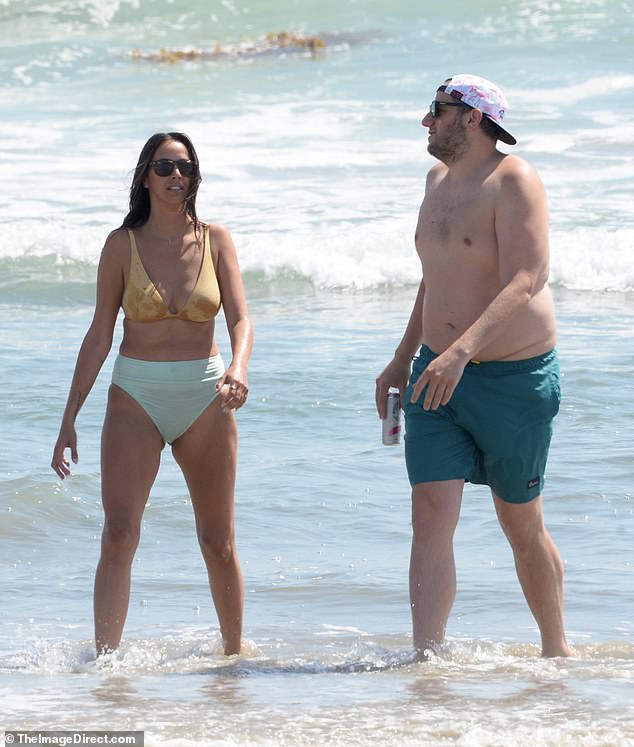 Going strong: The couple have been dating for over a year, with Alex supporting Kristen through her racism controversy in June last year which resulted in her getting fired from reality show Vanderpump Rules along with Stassi Schroeder 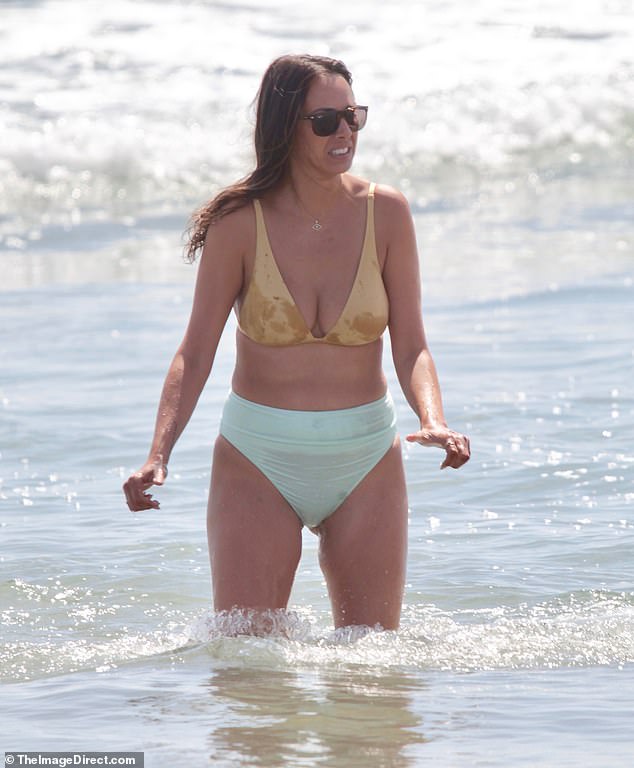 Laying low: Kristen has been keeping a low profile and enjoying her relationship since being fired from the Bravo show

‘He is the most precious gift and I am so blessed to be his Mommy. [heart emoji] We are soooooo so happy, he is a dream come true!! [laughing and heart emojis] – Both Mommy & Baby are doing great! [heart emoji] (sic)’.

Jax also revealed he ‘fell in love with [Brittany] all over again’ during her pregnancy.

He said: ‘I have the most beautiful son a man could ask for, he’s an absolute blessing from god. I just want to say how absolutely amazing my wife has been through this whole process, it has not been an easy pregnancy for her but she did an absolute amazing job all the way till the end.

‘I have always been in awwh of Brittany but I fell in love with her all over again. She is our families rock. We are so in love (sic)’. 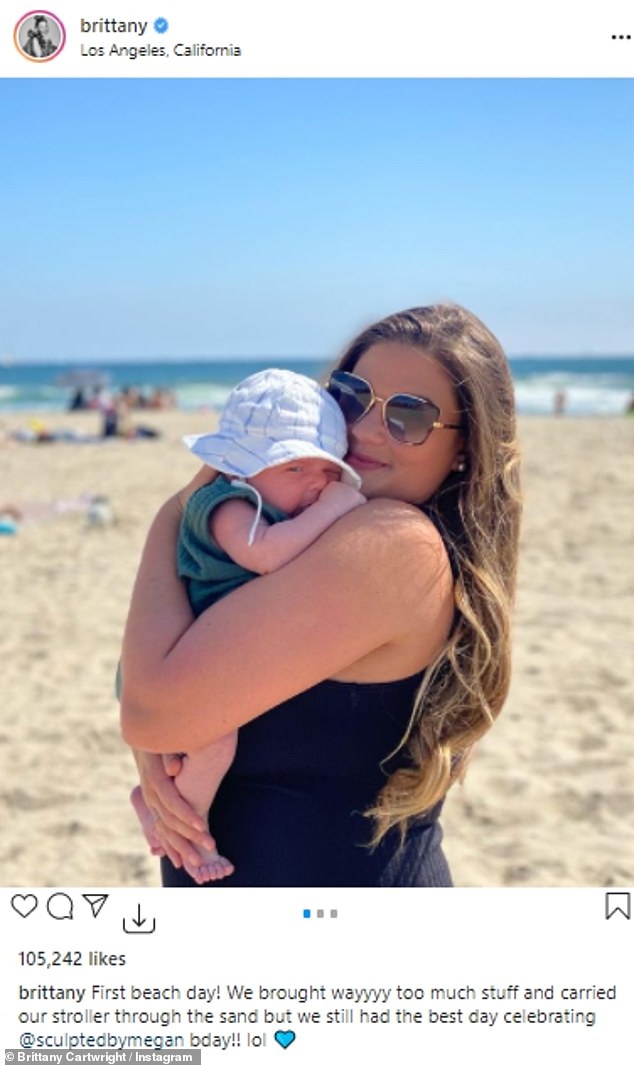 Overprepared: Brittany shared some photos from the day and revealed the couple brought too many things too the beach 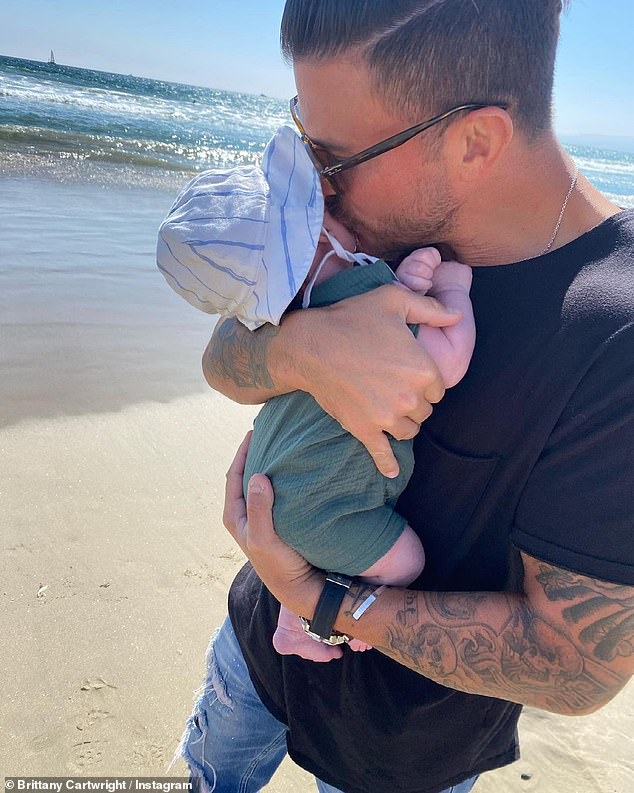 Her beau Alex supported her through the racism controversy in June which resulted in her getting fired from reality show Vanderpump Rules along with Stassi Schroeder.

‘This woman has been put thru the ringer [sic] these last few weeks and has taken it like a champ,’  Alex wrote on Instagram on June 30. ‘Anyone that knows you knows your heart is pure and kind.

‘She has dealt with it with grace and strength, and is putting in the work behind the scenes,’ he gushed. ‘I honor you @kristendoute and will always be your #1 big idiot fan!’ 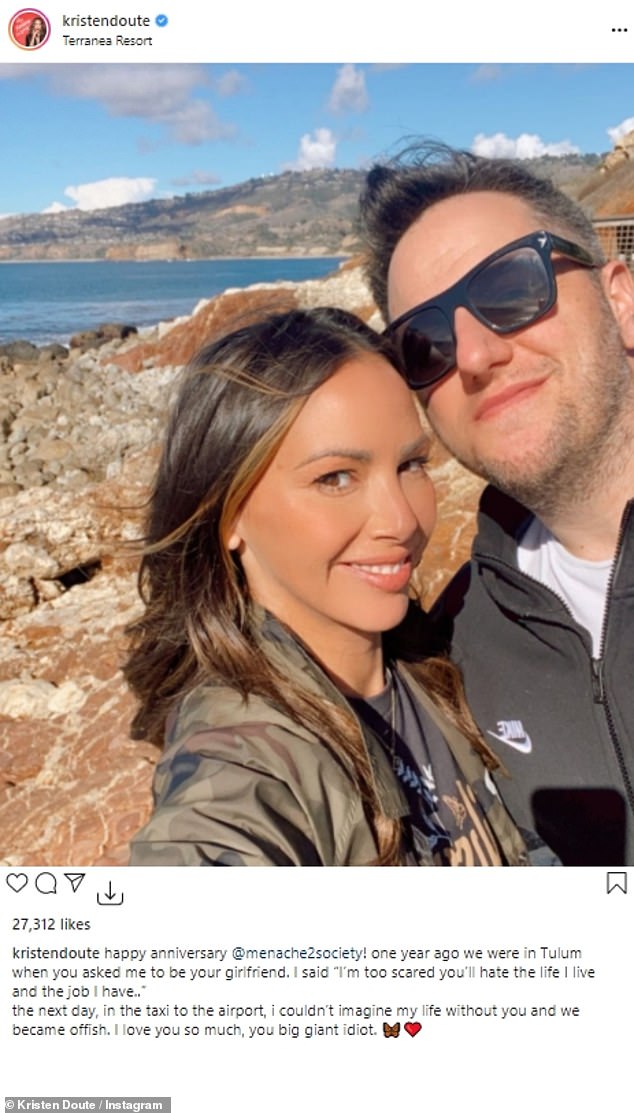 Love: Kristen celebrated her one-year anniversary with Alex in March

What to Know About Amazon’s New Network #englishheadline

Ciara On Russell Wilson, Her Kids, And All Good Diapers #englishheadline