The Ford SUV that was carrying '25 illegal immigrants' as it pulled out in front of a semi-truck...
Read more 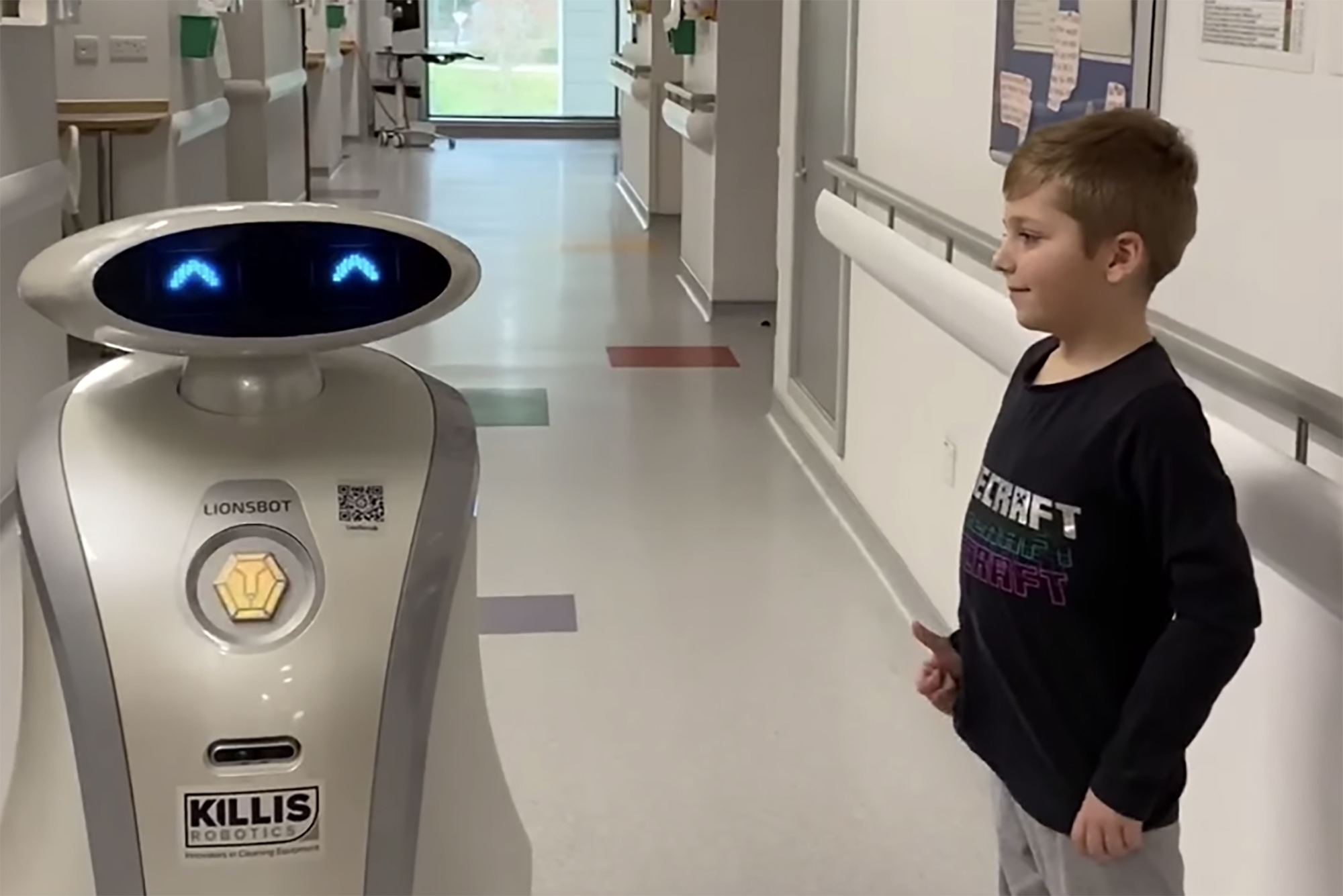 They say laughter is the best medicine — but this is off the Wall-E.

“More than just cleaning, LionsBot robots are crowd minglers that bring joy and delight,” wrote the Singapore-based automaton firm on their website. “They are able to inform, entertain, and even exchange a simple conversation with you upon activated via QR code.”

A video demonstration of the janitorial joke droid in action was recently posted to Facebook by the UK’s Maidstone and Tunbridge Wells NHS Trust, which plans on leasing two of the LionsBot creations for their pediatric ward in Kent, the Daily Mail reported. In the uproarious clip, a cleaning bot named Ella can be seen telling jokes to infirm children during a trial run at the facility.

“The Earth’s rotation really makes my day” quips the laugh machine, which reportedly interacts with anyone it comes into contact with, per the site.

In another clip of a different visit, Ella tells a kid: “How do trees access the internet? They log on.” For added effect, the cybernetic comic squints her blue LED eyes and wobbles her head to insinuate mirth as a playful giggle emanates from her speaker.

Sarah Gray, the Trust’s assistant general manager for facilities, said Ella “put a smile on the faces of some of our youngest patients” with her routine.

Ella’s delivery might sound robotic, but this riotous roomba had social media in stitches as well.

“My 7 year old laughed his head off at that joke! Great work, Ella!” wrote one newfound fan on Facebook.

Others compared the joke-bot to Eve, the girlfriend of the titular character from “Wall-E.”

The hospital hopes to deploy two Lionsbots to entertain sick kids in the pediatric ward during the summer. The rest of the time these part-time Patch Adams bots will be tasked with mopping the reception areas in the two hospitals — their primary directive.

Gray explains that having Ella clean the floor will “help free up” their human cleaners to sanitize “vital” touch points that are most likely to facilitate the spread of COVID.

And they’re well-equipped to clean. LionsBot boasts 16 models of cleaning bot spanning four specialized castes — scrubbers, vacuumers, moppers and a small but powerful tower with a pulling capacity of almost 1,000 pounds, the Daily Mail reported. These cutting-edge custodians come outfitted with sensors to help them nimbly navigate obstacles while traveling at a high velocity.

Best of all, LionsBots are controlled via a special smartphone app and can self-dock and recharge automatically between shifts.

Their cold efficiency doesn’t prevent them from displaying impeccable bedside manner. LionsBot writes: “Our humanised robots also embody Singaporean traits; for instance, friendliness, diligence and efficiency which are reflected via the interactive features and high productivity.”

While these automated comedians may not render their human counterparts obsolete, droids have demonstrated remarkably anthropomorphic qualities in the past. In the most dystopian example, a group of Boston Dynamics bots were filmed dancing so fluidly you’d think they were CGI.

The Ford SUV that was carrying '25 illegal immigrants' as it pulled out in front of a semi-truck...
Read more
Sports

25 Famous Actors In The Beginning Of Their Careers Vs. What They Look Like Now #Englishheadline

25 Famous Actors In The Beginning Of Their Careers Vs. What They Look Like Now #Englishheadline