John Mendenhall, a defensive tackle with the Giants from 1972-79, died Friday after a lengthy illness, according to...
Read more

Just eight weeks ago I lost my dear dad to Covid. I sat at his hospital bedside for...
Read more

"You see, stories have a way to...they can change our hearts and our minds. They can...
Read more


Ursula von der Leyen accidentally made the case for Brexit while apologising to Europe for the slow pace of her vaccine roll-out today – admitting that solo countries will be quicker at getting things done.

Attempting to justify why the EU signed deals for Covid vaccines weeks or months after the UK, she said on Friday that countries acting alone are ‘like a speedboat’ while the EU ‘is more of a tanker.’

After a week which saw von der Leyen threaten drug-maker AstraZeneca over deliveries of its jab, she was also forced to admit ‘underestimating’ problems in how the vaccines would be produced and rolled out.

Von der Leyen also said she ‘regretted’ threatening to block vaccine exports to Britain by imposing a hard border in Ireland, saying: ‘We shouldn’t even have thought about [it]’. 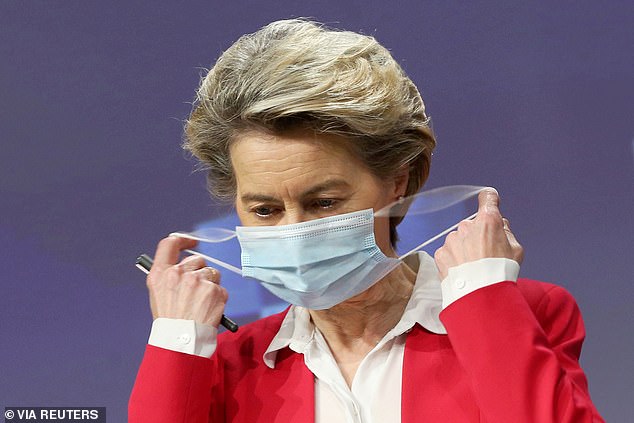 Ursula von der Leyen accidentally made the argument for Brexit as she apologised for the EU’s slow vaccine roll-out today, admitting solo countries will be faster at getting things done 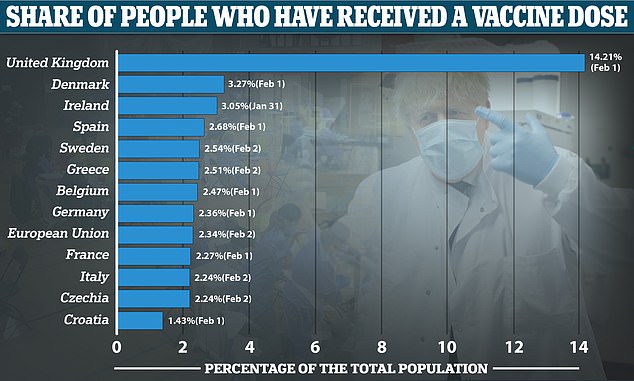 The UK has far outpaced EU countries with its vaccine roll-out, which has seen 14 per cent of the total population jabbed compared to just over 2 per cent on average in Europe

The 64-year-old also conceded that she had made a mistake when promising that 70 per cent of Europeans would be vaccinated by the end of summer, a target that now looks all-but impossible to achieve.

Speaking to Suddeutsche Zeitung and other European outlets in a group interview published Friday, she addded: ‘We should have explained that things are moving forward, but slowly, and that there will be problems and delays with these completely new procedures.’

But she continued to insist that having the EU negotiate on behalf of the 27-member bloc was still the right thing to do.

‘I can’t even imagine what it would have meant for Europe, in terms of unity, if one or more Member States had access to vaccines and not the others,’ she said.

Europe’s vaccine roll-out has been plagued by delays and delivery problems that has seen the continent vaccinate just over 2 per cent of its population so far, compared to more than 14 per cent in the UK and 8 per cent in the US. 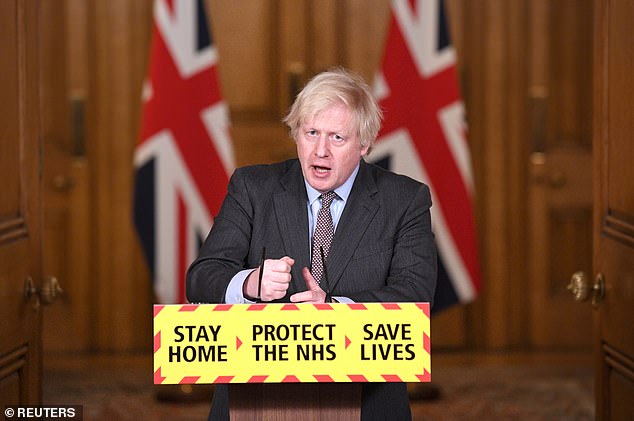 Von der Leyen was also forced to admit ‘regret’ over an extraordinary spat with the UK and drug-maker AstraZeneca last week, saying she bares responsibility

Late vaccine orders and slow approval for jabs by the continent’s medicine agency as well as red tape in member states has all contributed to slow down the process.

But it was thrown into complete disarray last week when AstraZeneca, one of the bloc’s main suppliers, cut initial deliveries of its jab by 60 per cent.

That followed an announcement from Pfizer that supplies of its jabs would also be temporarily cut.

That has forced leaders to look elsewhere for jabs, with China and Russia’s vaccines both being considered for approval in the bloc in what would be a major PR coup for both regimes.

Scientists voiced alarm after Moscow registered the Sputnik vaccine last summer before Phase III trials had even been completed.

But those doubts were eased on Tuesday after The Lancet published results of trials involving 20,000 volunteers showing an overall 91.6 per cent efficacy rate.

‘There are no arguments left for critics of this vaccine, the article in The Lancet is a checkmate,’ said Kirill Dmitriev, head of the Russian Direct Investment Fund. 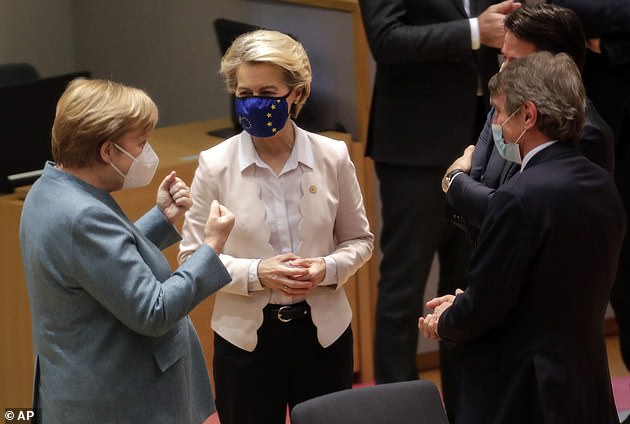 Von der Leyen (centre) admitted the EU should have told people there would likely be delays and problems with the vaccine roll-out, instead of pushing ahead with amibitious targets

Merkel said this week that ‘all vaccines are welcome’ in the EU, adding that she had spoken to Vladimir Putin about the Russian-made jab – whose developers have already approached a German firm about joint production.

The chancellor has previously offered Putin the help of Germany’s official Paul Ehrlich Institute in assisting Russia with the application process for EU regulators.

In addition, EU leaders themselves have been accused of sowing unjustified doubts about the safety and effectiveness of the vaccines.

But earlier this week, von der Leyen herself said that the EU had started later because it ‘agreed not to compromise’ on safety – implying that the UK had done so.

Emmanuel Macron was also criticised for questioning the effectiveness of the AstraZeneca vaccine, which has been approved by EU regulators.

Separately, Germany and France have both restricted the AstraZeneca jab to under-65s – further limiting their ability to protect the most vulnerable groups.

German regulators pointed to the small sample size of elderly patients in the Oxford/AstraZeneca trial, meaning any effectiveness figure would be meaningless.

But Britain is using the jab for all age groups, with AstraZeneca pointing to trial results showing that 100 per cent of seniors generated antibodies.

John Mendenhall, a defensive tackle with the Giants from 1972-79, died Friday after a lengthy illness, according to...
Read more
Health

Thieves steal 1,000 pints of beer from a sunken ship in Argentina #Englishheadline

Thieves steal 1,000 pints of beer from a sunken ship in Argentina #Englishheadline

The two former staffers of Gov. Andrew Cuomo who have publicly accused him of sexual harassment on the job expressed their support for...
Read more

Barney Melekian was sworn in as the City of Santa Barbara’s 28th police chief — at least since 1900.  Melekian will serve as interim...
Read more

Third woman accuses Cuomo of sexual misconduct saying he asked ‘can I kiss you?’ at 2019 wedding #Englishheadline