These are the fortunate Afghan evacuees who landed in the United States on Thursday hours before two explosions rocked Kabul airport, killing at least 60 people, including children, and 12 US troops.

The heartfelt and tear-filled moments where parents, children and couples are reunited were captured as the relieved refugees arrived at Dulles International Airport in Washington DC. Some individuals were seen smiling and embracing their loved ones, while others walked through the airport with solemn expressions on their faces.

‘I feel safe here. I think it’s a better place,’ 23-year-old Kamran, who evacuated Kabul, told the New York Times upon his arrival at Dulles.

Kamran, along with many other evacuees, remains fearful for relatives back in Afghanistan where the now Taliban-controlled nation faces chaos and violence. 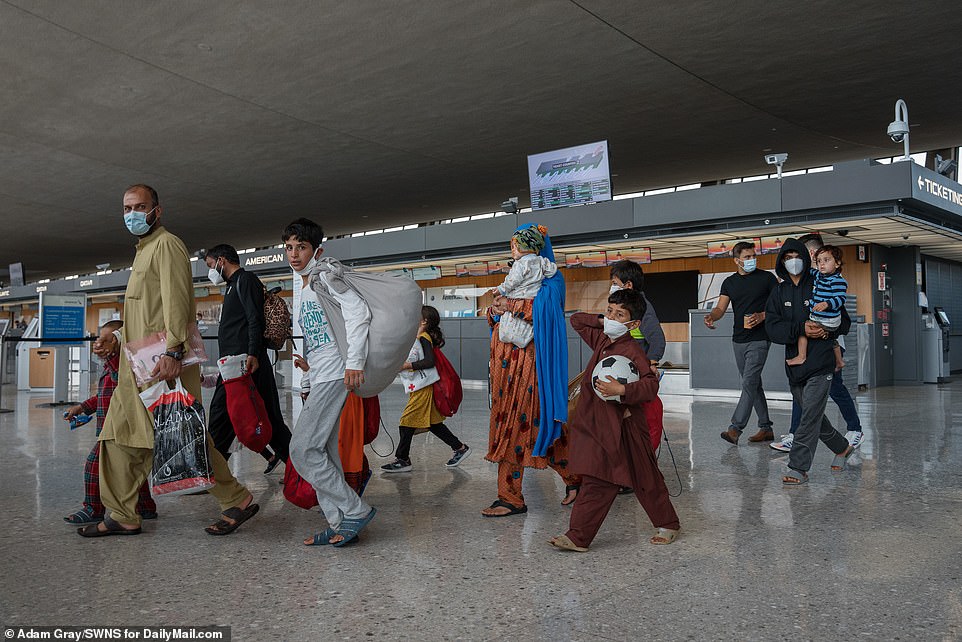 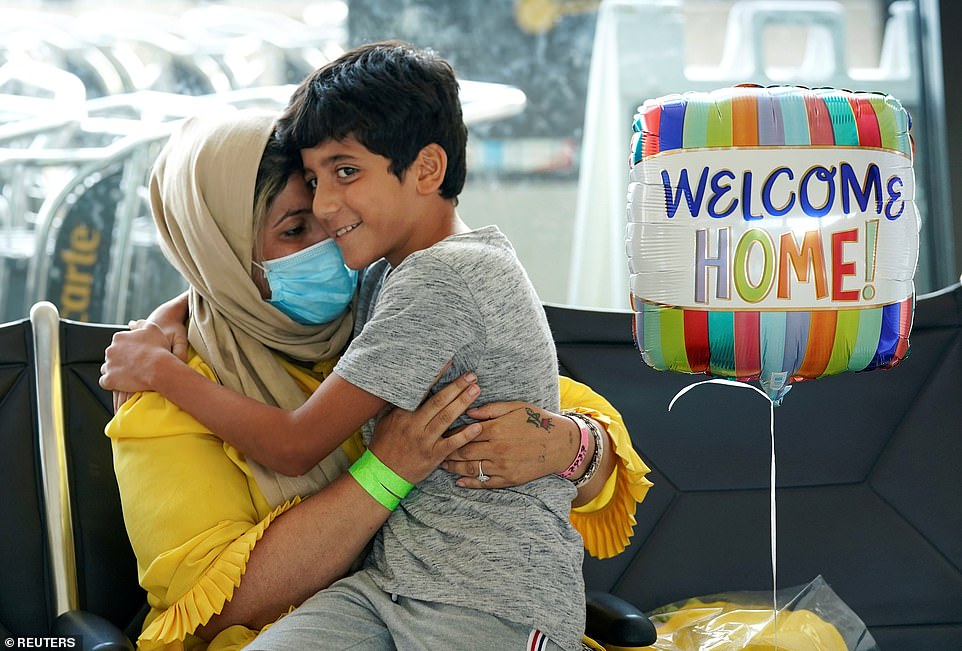 A ‘welcome home’ balloon floats beside a boy hugging his mother upon her arrival from Afghanistan as they are reunite at Dulles airport on Aug. 26, 2021. 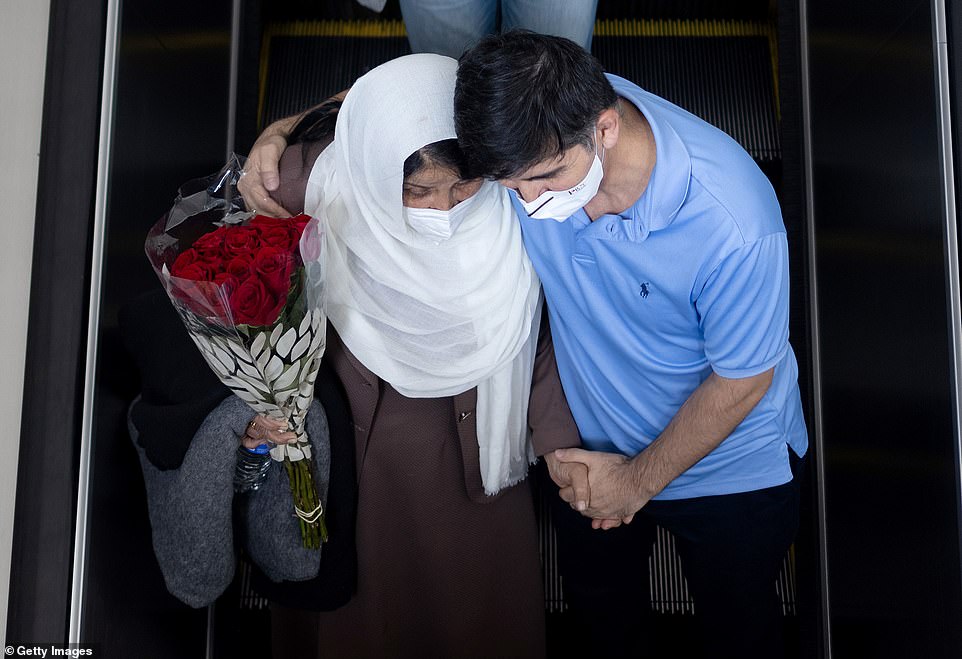 A man and woman are seen holding hands on an escalator at Dulles airport on Aug. 26, 2021

Hamid Wahidi, who was a translator for Americans before moving to the US, greeted his brother, sister-in-law and their five children after waiting in the parking lot outside Dullles Expo Center for hours.

‘I’m very happy for them to make it safely out of there,’ Wahidi told the Wall Street Journal.

‘Of course, it’s going to be another struggle for them getting settled here, but at least they are in a safe place.’

Scenes mimicking that of the Wahidi family were on display throughout the airport.

A young boy held a ‘welcome home’ balloon and hugged his mother inside the airport upon her arrival.

An Afghan man who reunited with his fiancée was seen holding her hand and presented her with flowers.

‘We are safe,’ one evacuee said when a reporter with the New York Post asked him how it felt to be in America.

Many women were seen clutching young children, some only carrying purses or small bags with limited clothing and supplies. Other individuals fled Afghanistan completely empty-handed. 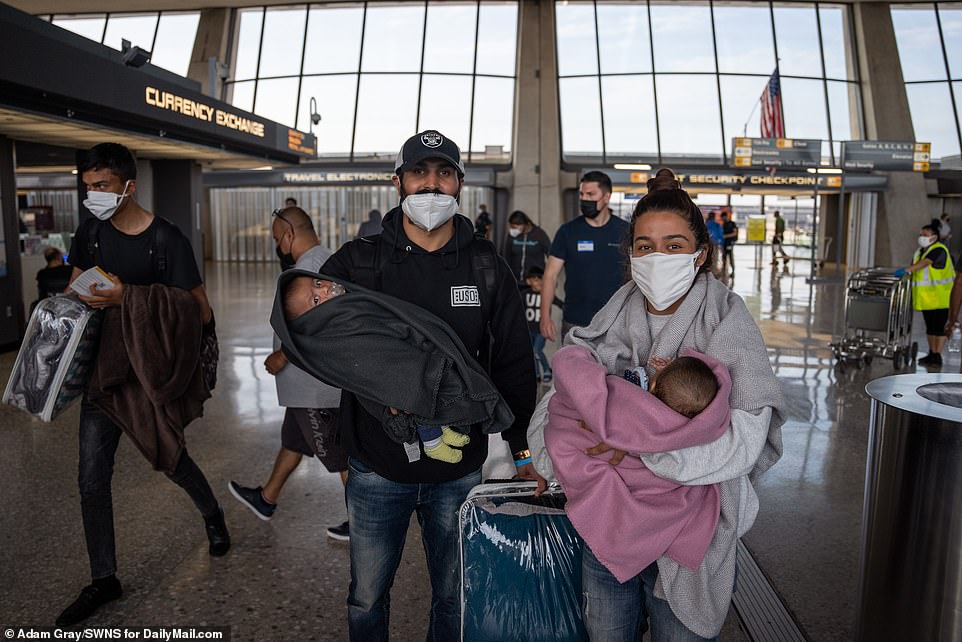 A couple holds their twin babies on Thursday, Aug. 26, after arriving to Dulles from Afghanistan on evacuation flights 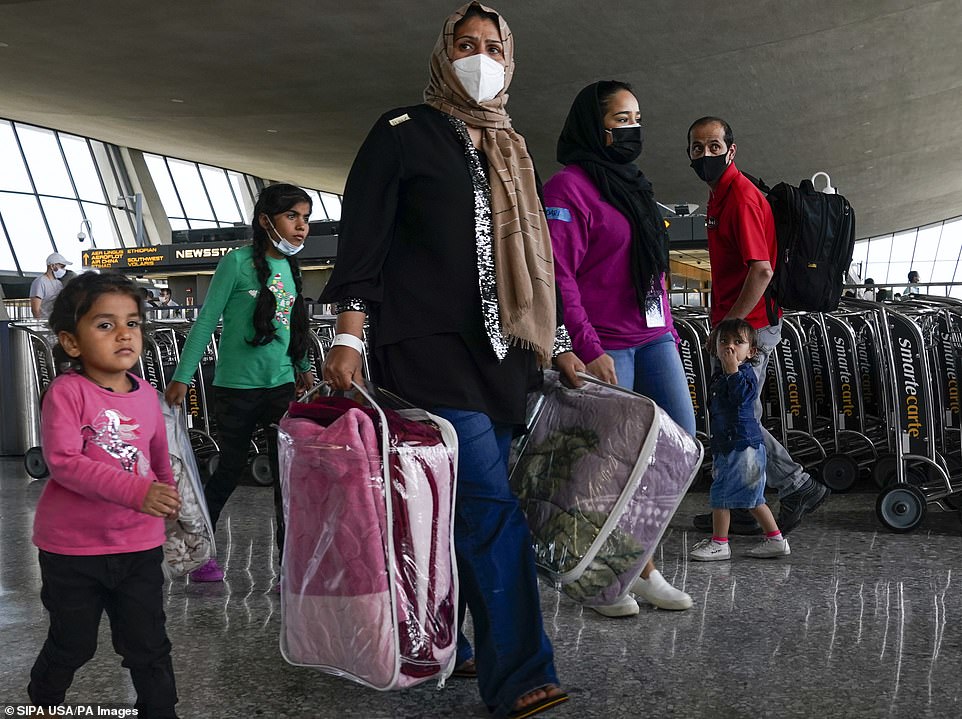 A family of evacuees carries bedding-filled luggage through Dulles airport on Thursday, Aug. 26 as they prepare to head to military bases 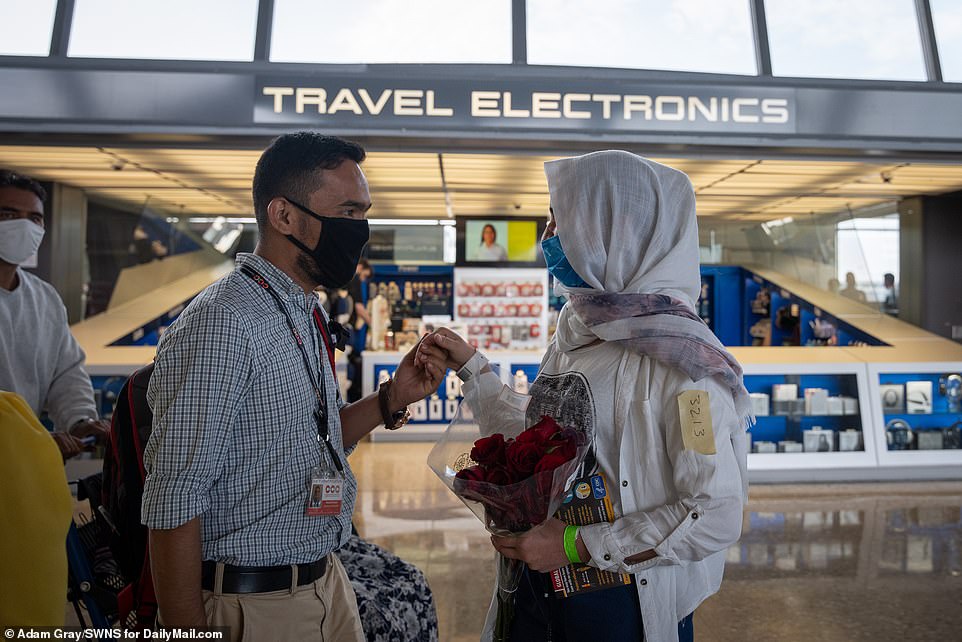 An Afghan man is reunited with his fiancée as she arrives at Dulles International Airport after arriving from Afghanistan via evacuation flights on Aug. 25, 2021 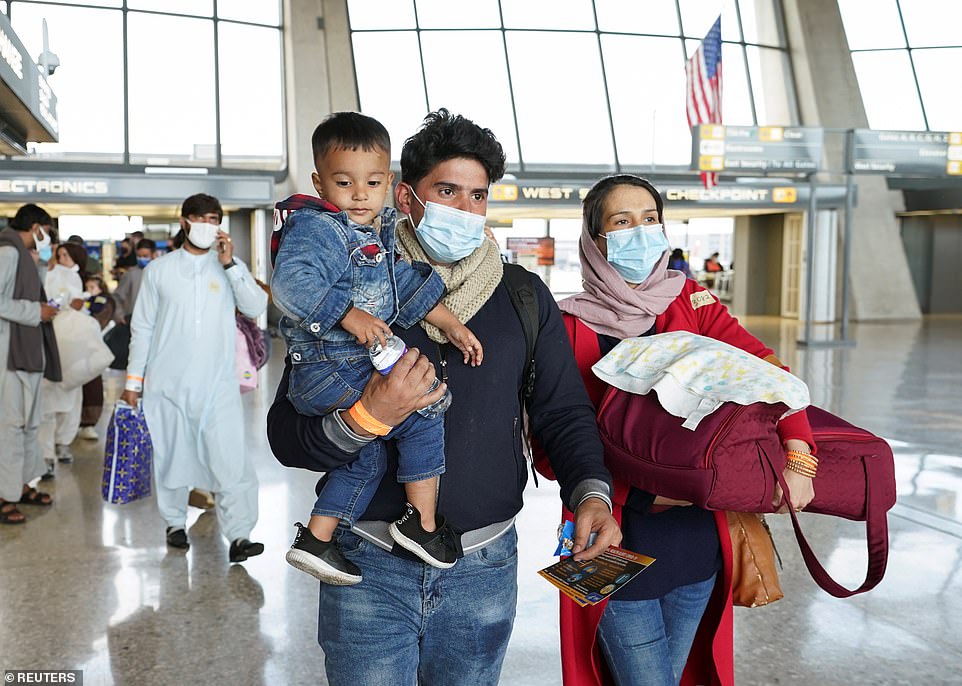 An apparent couple and their young child carry their luggage through the airport after exiting their evacuation flight to Dulles airport on Aug. 26 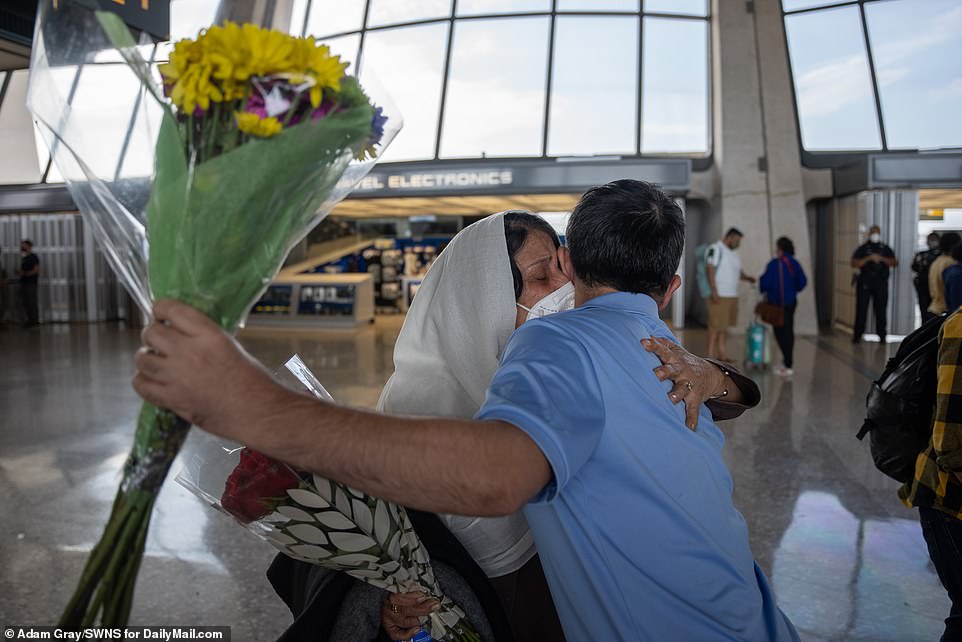 A man, bearing flowers, hugs a woman as they are reunited at Dulles airport 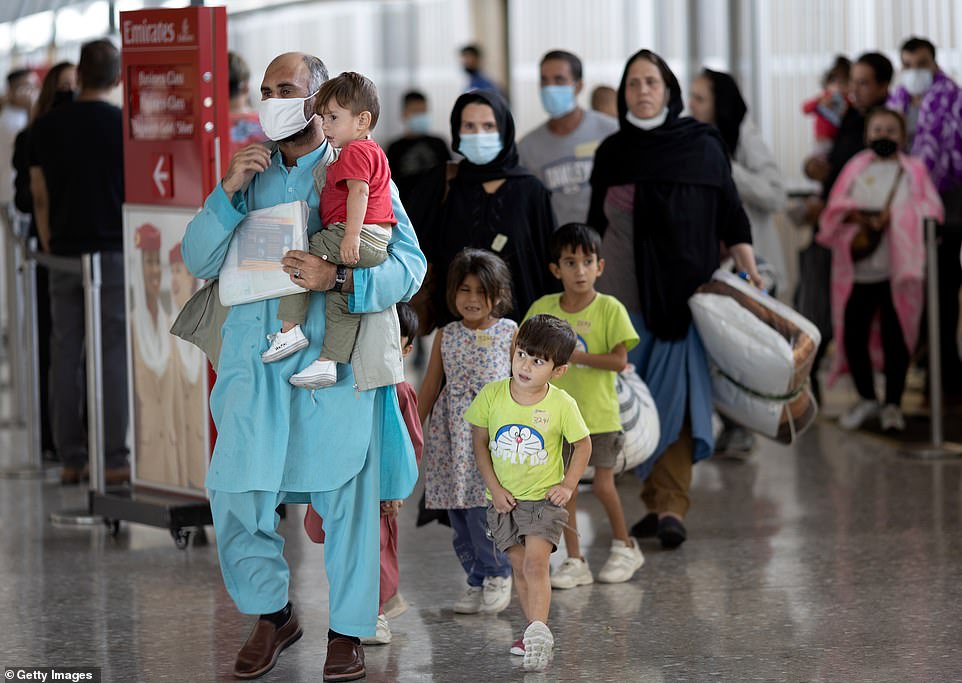 A refugee who evacuated from Kabul is seen clutching a young boy and a portfolio filled with apparent documents as he walks through Dulles airport on Aug. 26, 2021 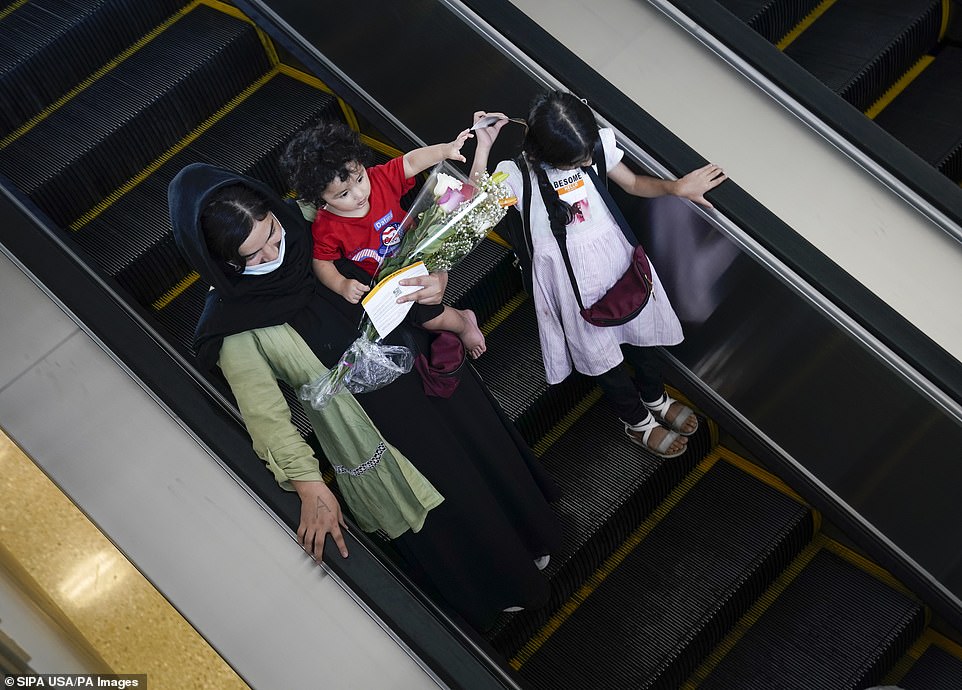 Outside the airport, lines of refugees boarded buses that would transport them to a nearby military base.

An official directed people to the busses, offering words of encouragement and answering questions from evacuees.

‘Go here?’ a man, who was travelling with a child, is heard asking in video captured by DailyMail.com photographers.

‘Yes,’ the official replied, pointing to the bus.

The man then thanked the official before boarding the vehicle with his family.

Many evacuees say they don’t know what to expect next.

‘We are just waiting and seeing what will happen,’ Kamran told the New York Times, noting that he believes it will be better than the situation in Afghanistan.

Kamran said he left for the Kabul airport five days before his Wednesday arrival at Dulles.

He shared that he had been beaten with batons by Taliban members and had to push his way to the American side of the airport. Once there, he stayed at the airport for two days enduring crowded, hot and chaotic conditions.

The U.S. evacuated 13,400 people from Kabul in the last 24 hours, taking the evacuees to bases in Qatar, Bahrain or Germany before they return to the states.

Those who are cleared to travel are then flown to Dulles airport, located in the greater Washington DC area, processed and transported to military bases in New Jersey, Texas, Virginia and Wisconsin, AXIOS reported. Additional bases are expected to be added.

The tarmac at Dulles is filling up with flights transporting refugees. As of Thursday morning, people on seven different aircrafts waited at the airport as more flights were expected to come in, the Wall Street Journal reported.

Evacuees who boarded flights with minimal belongings are waiting for up to ten hours to be processed by government officials before they can be transferred from the airport to temporary housing.

A Department of Homeland Security told the newspaper that processing delays are stemming from a backup in the vetting of Afghans.

‘Over the last several days, we have worked with urgency and with care to enhance screening and vetting operations such that we make these operations more efficient without compromising national security,’ the official said.

Once they are cleared from the planes, evacuees are either reunited with their loved ones or boarding busses that while take them to military bases. 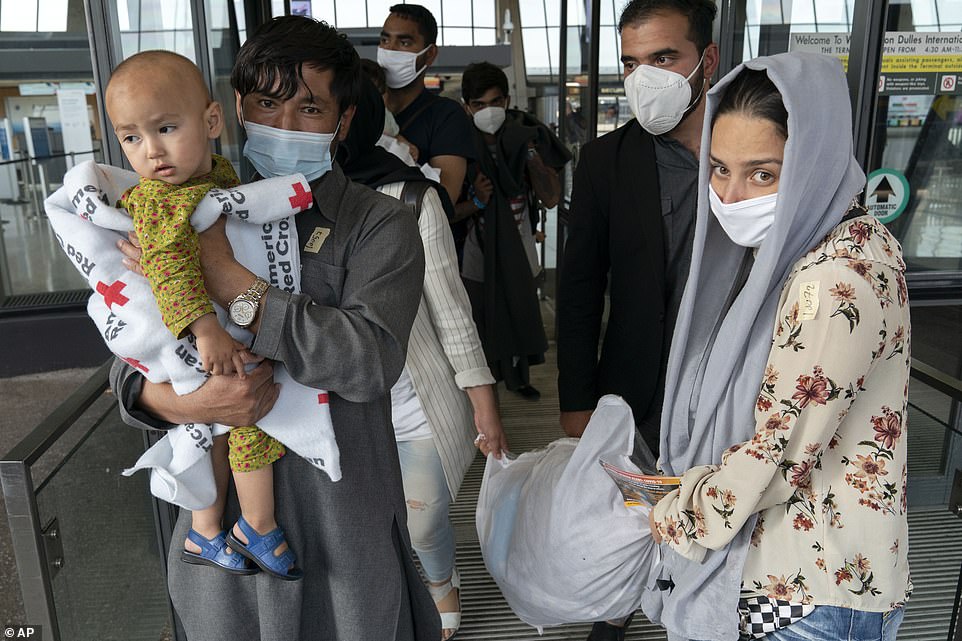 Families evacuated from Kabul walk through the terminal at Washington Dulles International Airport on Aug. 26, 2021 before boarding a bus taking them to a nearby military base 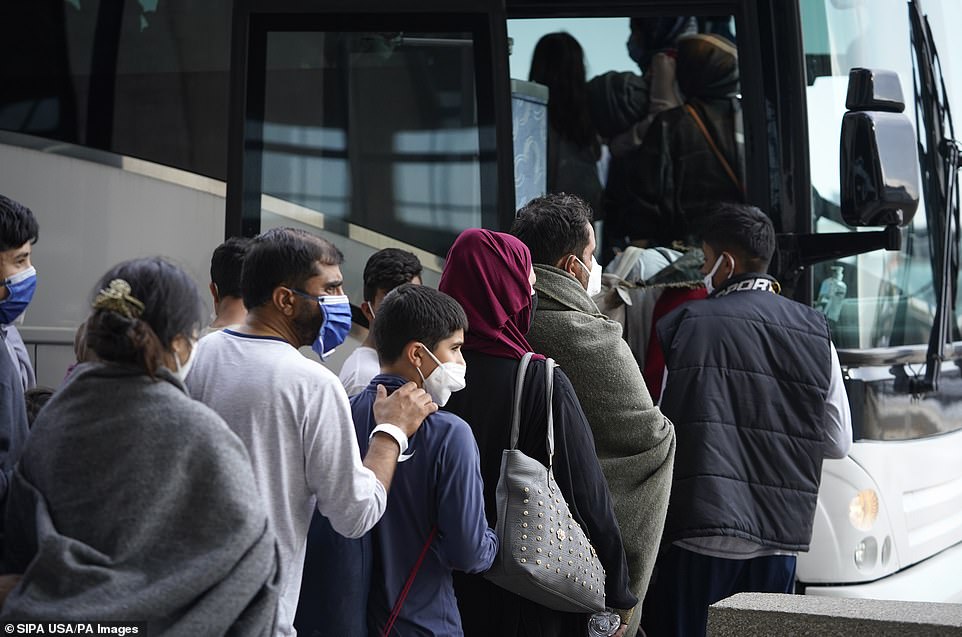 Afghan refugees, who arrived at Dulles airport in Northern Virginia on Aug. 26, board a bus transporting them to military facilities for processing and temporary housing 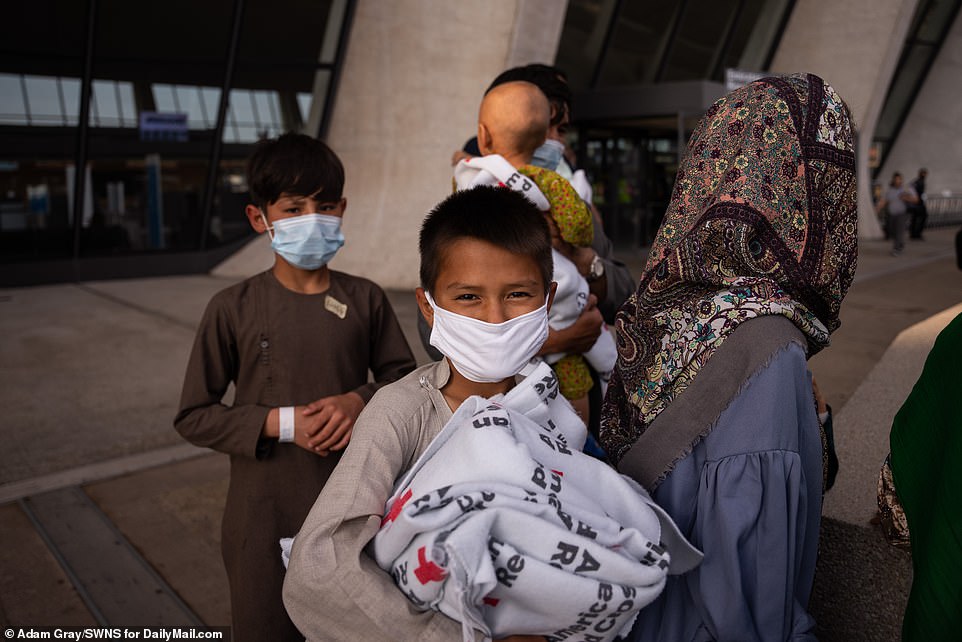 A family of refugees exits Dulles airport on Aug. 26 after arriving to the U.S. on evacuation flights. A young boy, who appears to be smiling under his face mask, holds a blanket bearing the Red Cross logo 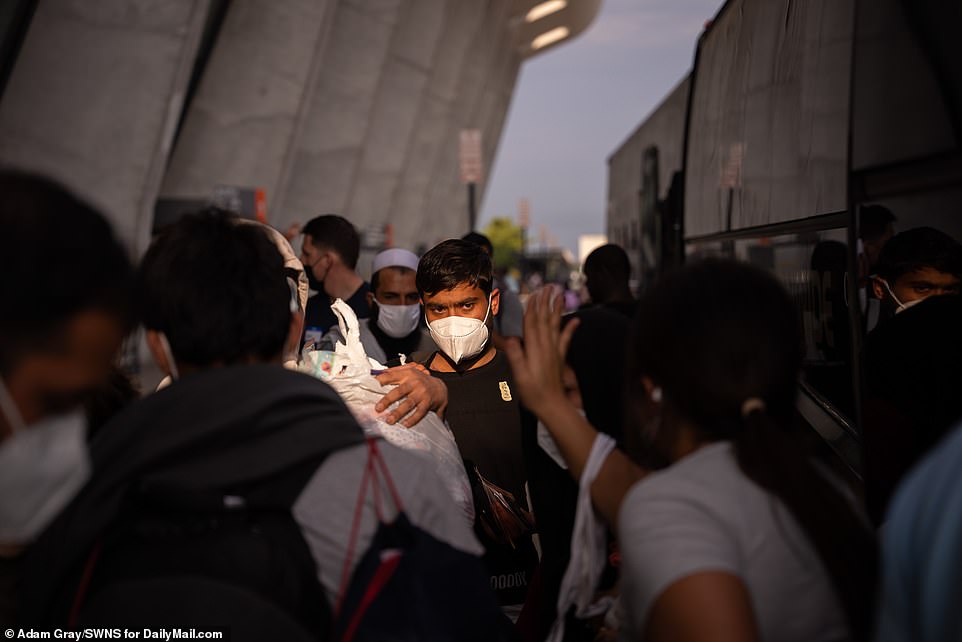 A group of evacuees exit Dulles airport on Aug. 26 after arriving from Afghanistan 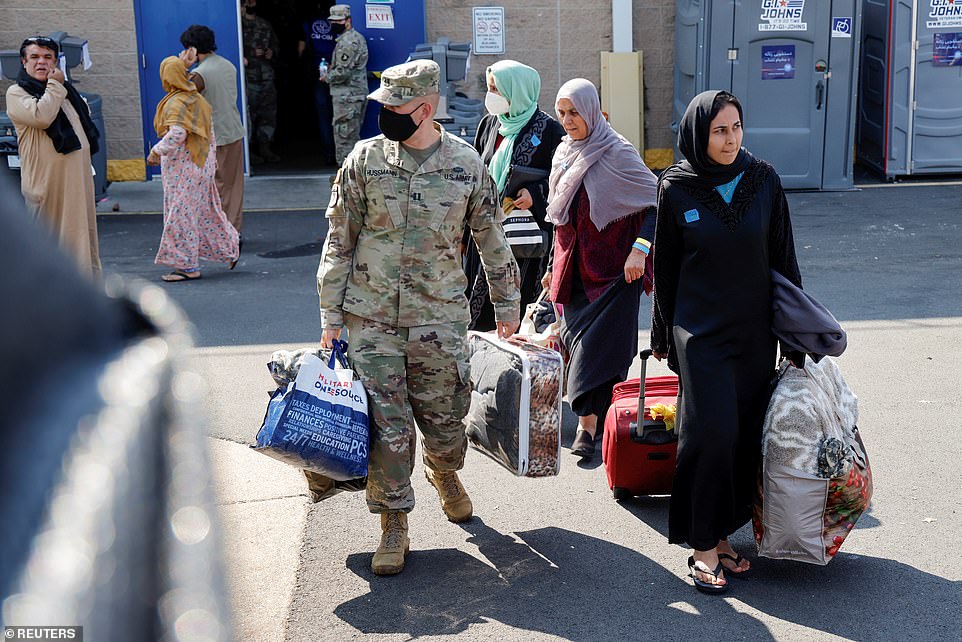 U.S. Army soldiers are assisting families as they depart a processing center for evacuees from Afghanistan at the Dulles Expo Center 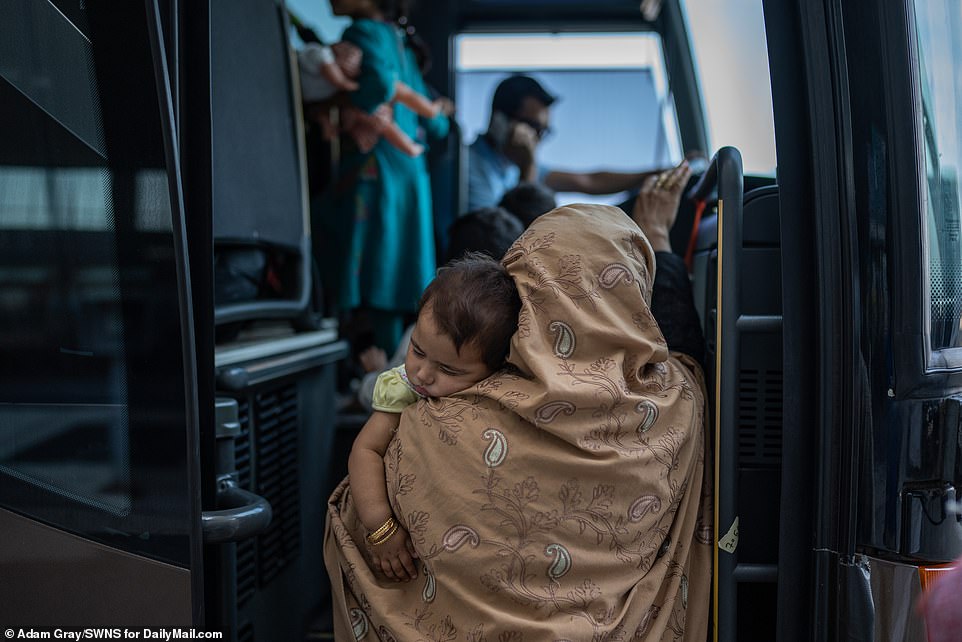 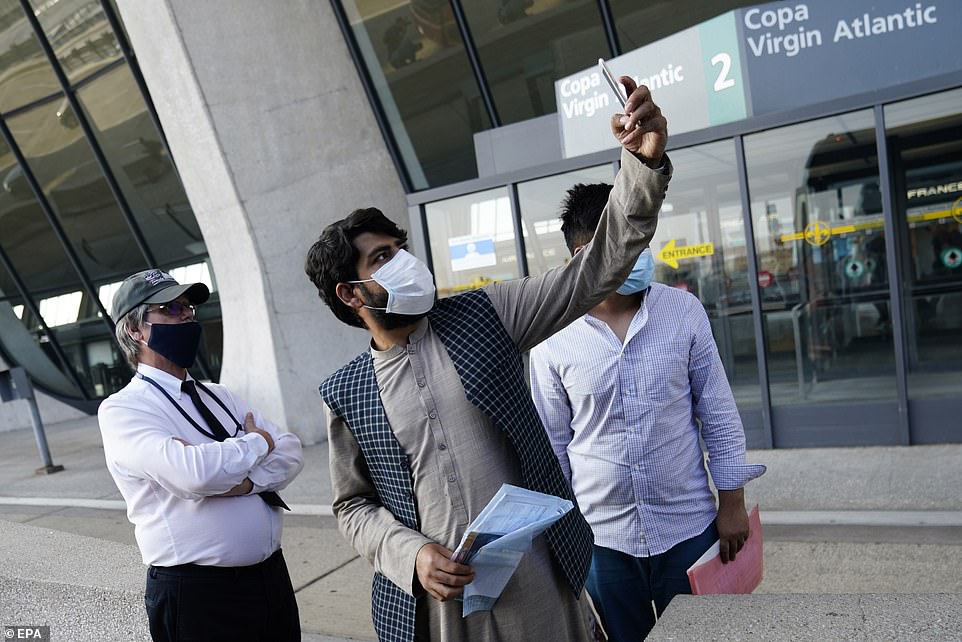 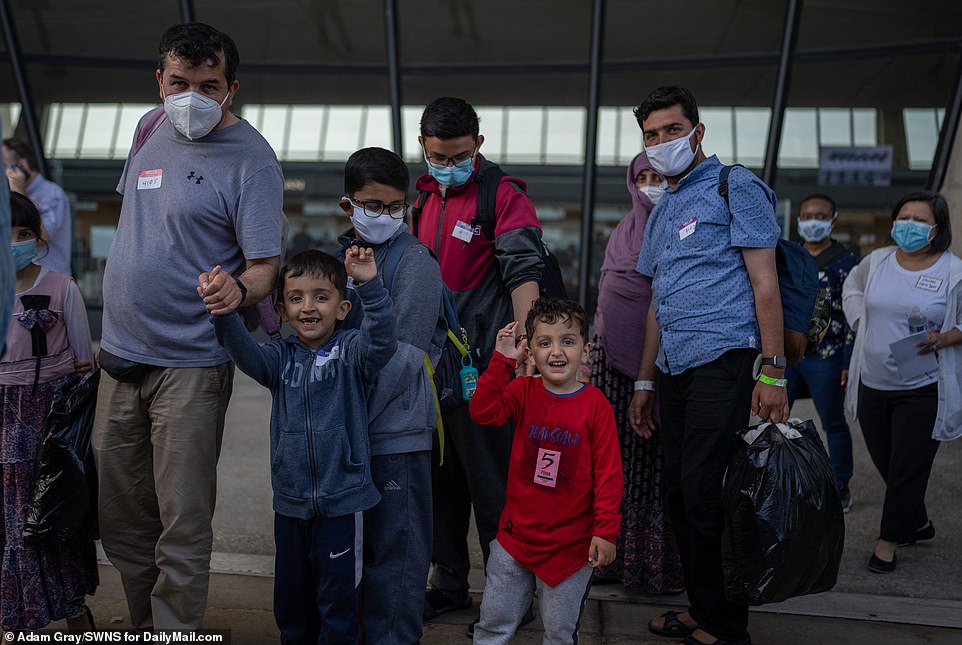 A family with young, smiling children are outside Dulles airport after arriving from Afghanistan via evacuation flights

An estimated 1,500 Americans still are trapped in Afghanistan following a rapid Taliban takeover of the country on the heels of the US pulling out after a 20-year occupation.

Desperate Afghan men, women and children have swarmed the airport in a bid to escape and 10,000 evacuees are inside the gates waiting to get out, fearing further attacks from the Islamic State offshoot ISIS-K.

The terrorist group is allegedly responsible for the two explosions at Kabul airport Thursday that killed at least 60 people, including children, and 12 U.S. troops.

The first blast was caused by an ISIS suicide bomber in a vest, detonating outside The Baron Hotel, at the Abbey Gate of Kabul airport, according to Fox News and Politico. Westerners were staying in the hotel before their evacuation flights.

A second explosion was reported at the airport’s Abbey Gate, where crowds have been gathering for more than a week in the hope of being put on one of the evacuation flights out. That explosion was caused by a car bomb, according to unconfirmed reports.

Pentagon Press Secretary John Kirby tweeted there were a ‘number of US & civilian’ casualties but it’s unclear if he was referring to deaths or injuries. 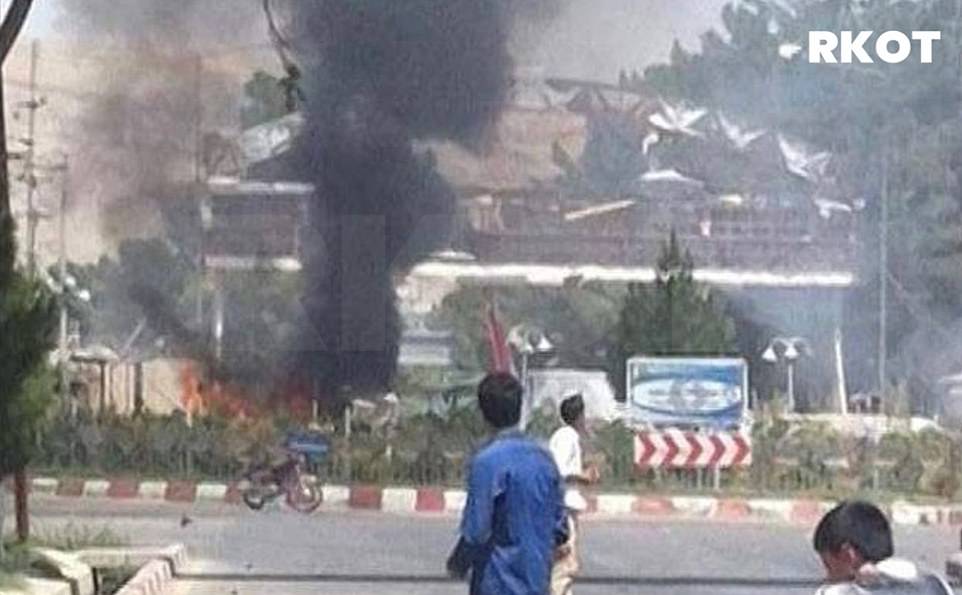 The blast was outside The Baron Hotel, at the Abbey Gate of Kabul airport. Westerners were staying in the hotel before their evacuation flights 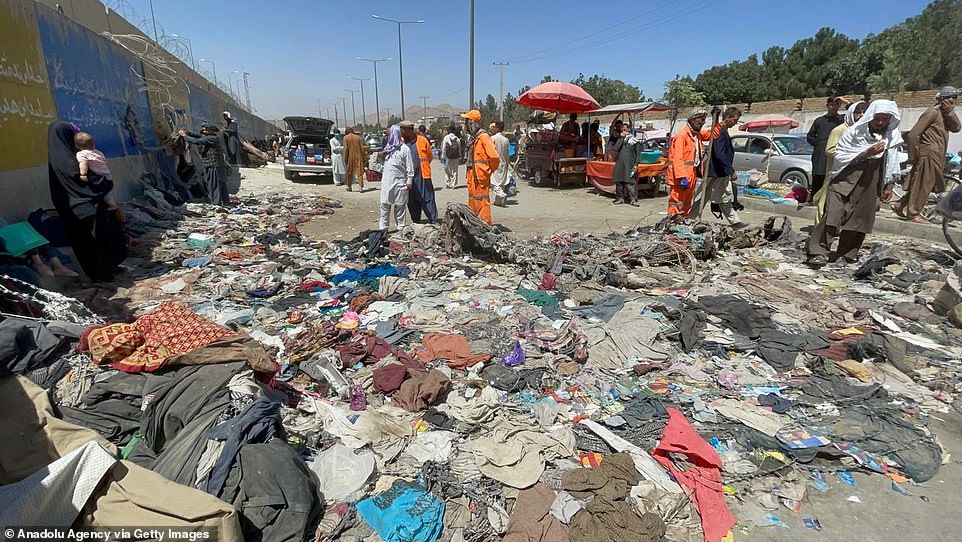 Afghan people who want to leave the country continue to wait around Hamid Karzai International Airport in Kabul, Afghanistan on August 26, 2021