The little-known story of how genius Jewish physicist Albert Einstein sheltered from the Nazis in a remote log cabin in Norfolk has been told in a new book.

The legendary scientist was kept safe by armed guards at the cabin on Roughton Heath, near Cromer, for three weeks in 1933 after he fled Germany following the rise to power of Adolf Hitler.

Einstein had been invited to stay in the home by its owner, the Conservative MP Oliver Locker-Lampson.

He remained a guest of Commander Locker-Lampson for three weeks before emigrating to the United States, where he sought asylum and lived for the rest of his life.

The story of their relationship is told by author Stuart McLaren in his book, Saving Einstein: How Norfolk Hid a Genius – The Double Life of Oliver Locker-Lampson.

The little-known story of how genius Jewish physicist Albert Einstein sheltered from the Nazis in a remote log cabin in Norfolk, which was owned by Conservative MP Oliver Locker-Lampson (left), has been told in a new book. Above: Einstein outside the cabin with Locker-Lampson and an armed guard 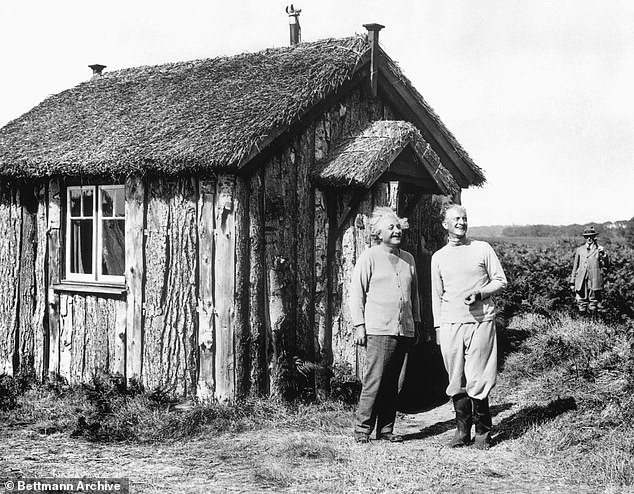 The legendary scientist was kept safe by armed guards at the cabin on Roughton Heath, near Cromer, for three weeks in 1933 after he fled Germany following the rise to power of Adolf Hitler

At the time of the Nazis’ rise to power, Einstein was famous across the world after winning the Nobel Prize for Physics in 1921.

He had published his famous theory of relativity in November 1915.

It transformed theoretical physics and astronomy and continues to underpin scientists’ understanding of the universe.

However, Einstein was forced to leave Germany after Hitler’s new government passed laws which barred Jews from holding positions including teaching posts at universities.

His published works were targeted in book burning ceremonies, whilst one German magazine put a $5,000 bounty on his head as it put him on a list of Jews who were ‘not yet hanged’.

Einstein’s home in Berlin was also repeatedly raided by the Gestapo.

To get away from the persecution, he initially moved to the US but then came back to Europe and briefly rented a house in Belgium before staying with Commander Locker-Lampson. 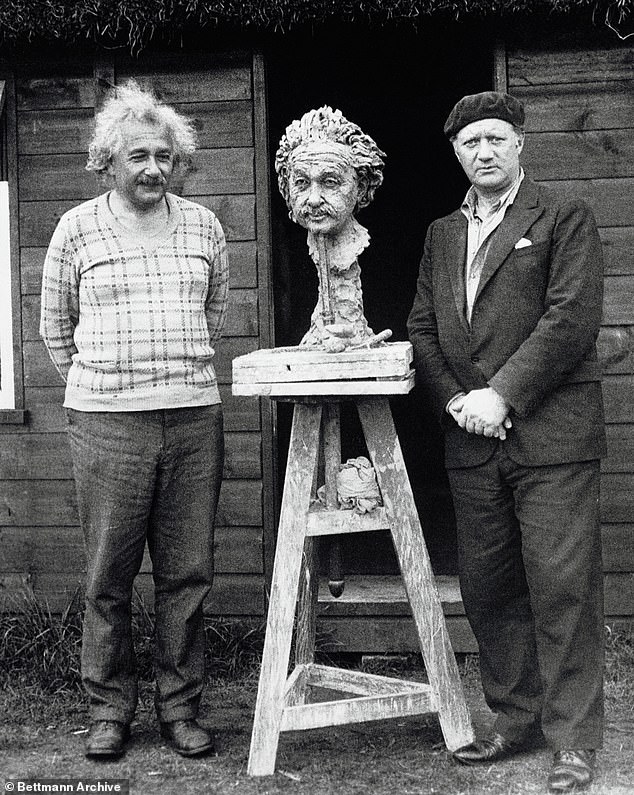 Jacob Epstein sculpted his famous bust of Einstein when the scientist was staying in the Cromer cabin. Above: The pair pose with his creation

Mr McLaren writes in his book: ‘Being a Jew would have been sufficient in itself to incur their hatred but being also a renowned and revered intellectual who wasn’t afraid to criticise them put him at the top of their list of enemies.’ 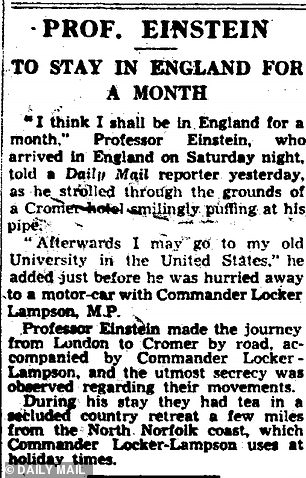 The Daily Mail reported Einstein’s stay in Cromer in 1933

Locker-Lampson offered Einstein sanctuary but, because it was believed that allowing him to stay at his family’s large summer home in Cromer would be too dangerous, it was decided that he would be hidden in a hut at a holiday camp on the nearby heath.

There, he continued to work and was visited by artist Jacob Epstein, who sculpted his famous bust of the scientist.

Recounting Epstein’s stay in his book, Mr McLaren describes how the physicist was given a personal butler and enjoyed drinking milk from the nearby herd of goats.

‘Throughout the day two young women dressed in riding boots, jodhpurs and polo shirts might have been observed walking about, rifles slung over their shoulders on leather straps,’ he writes.

‘Another man, immaculately turned out in a gamekeeper’s full rig and sometimes accompanied by a dog might have been spotted, particularly at dawn and dusk, his double-barrelled shotgun at shoulder arms like a guard on sentry duty.

‘From one of the huts the smell of cooking periodically wafted across the camp, followed by the bizarre spectacle of a waiter in a black tail coat and white gloves treading circumspectly across the grass bearing a laden silver tray. 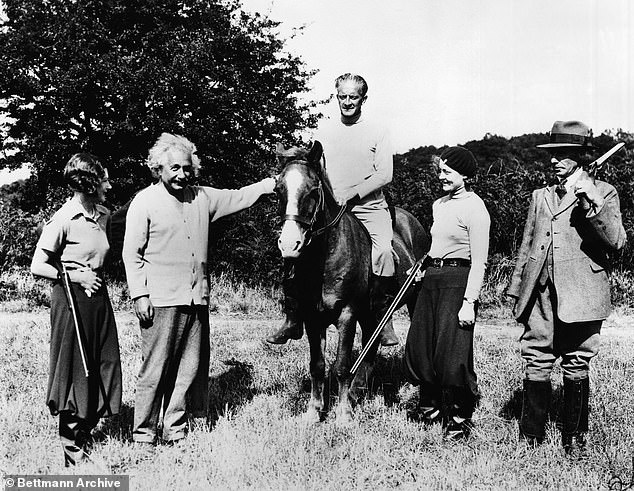 Whilst staying in Cromer, Einstein sunbathed and enjoyed milk from a nearby herd of goats, whilst being guarded all the time by women and men with guns. Above: The scientist poses with Locker-Lampson, who is sitting on a horse

‘From another hut came the incongruous sound of live music being played on a piano.

‘At other times the horn of a wind-up gramophone projected the scratchy sound of classical music, most probably by Einstein’s favourite composers Bach and Mozart.’

He then vividly describes how Einstein occupied his time by sunbathing and enjoying his surroundings.

‘Amid it all, a slightly stout, middle-aged man with an unkempt mane of greying hair seemed to be the centre of everyone’s attention as he lounged outside in an armchair, often bare-chested, as he soaked up the late summer sun or strolled about the camp, sometimes stopping to talk to a small flock of nanny goats or to pat a sleepy looking horse switching flies with its tail. 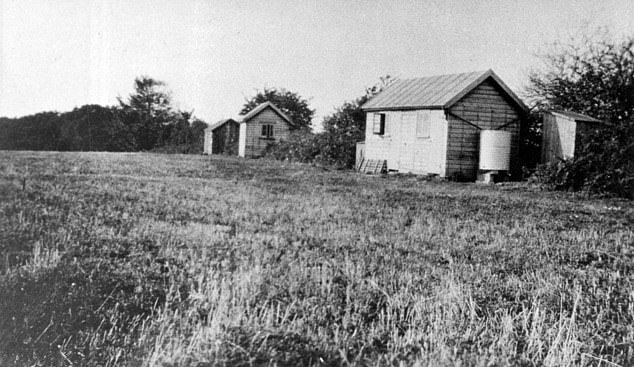 ‘At other times he might have been glimpsed inside one of the huts, scribbling away as he puffed on his pipe, a disordered pile of papers and notebooks strewn over a card table and spilling onto the floor.’

After his stay at the secret camp, Einstein went back to the US and became an American citizen in 1940.

He worked at the Institute for Advanced Study in Princeton, New Jersey until his retirement from the post in 1945.

In later life, he spoke out against the use of atomic weapons after two were dropped by the US on Japan at the end of the Second World War.

Albert Einstein (pictured) published his General Theory of Relativity in 1915

In 1905, Albert Einstein determined that the laws of physics are the same for all non-accelerating observers, and that the speed of light in a vacuum was independent of the motion of all observers – known as the theory of special relativity.

This groundbreaking work introduced a new framework for all of physics, and proposed new concepts of space and time.

He then spent 10 years trying to include acceleration in the theory, finally publishing his theory of general relativity in 1915.

This determined that massive objects cause a distortion in space-time, which is felt as gravity.

At its simplest, it can be thought of as a giant rubber sheet with a bowling ball in the centre.

Pictured is the original historical documents related to Einstein’s prediction of the existence of gravitational waves, shown at the Hebrew university in Jerusalem

As the ball warps the sheet, a planet bends the fabric of space-time, creating the force that we feel as gravity.

Any object that comes near to the body falls towards it because of the effect.

Einstein predicted that if two massive bodies came together it would create such a huge ripple in space time that it should be detectable on Earth.

It was most recently demonstrated in the hit film film Interstellar.

In a segment that saw the crew visit a planet which fell within the gravitational grasp of a huge black hole, the event caused time to slow down massively.

Crew members on the planet barely aged while those on the ship were decades older on their return.