Alessandra Ambrosio is soaking up the wonders of Mother Nature while on her tropical getaway to the island of Kauai in Hawaii.

And on Saturday, the longtime supermodel took a hike along a rocky and hilly stretch through brush until she reached her destination: a gorgeous waterfall.

With the sun glaring down on the falling natural water, she proceeded to walk along a large rock formation and then sit down under the rapidly flowing water and relish in the moment. 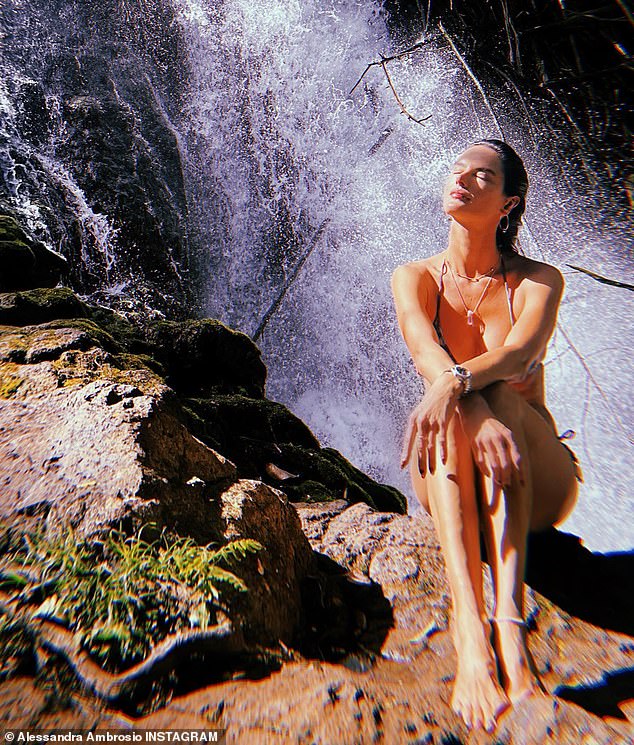 Splish splash: Alessandra Ambrosio, 40, enjoyed the splash of a gorgeous waterfall while out on a nature walk on the island of Kauai in Hawaii on Saturday

Prepared to get wet while out on her hike, the Brazilian beauty was swim-ready dressed in a silver bikini top and white Daisy Dukes.

It served her well when she arrived at the site, which included pockets of water along the rocks, just in front of the flowing water.

‘DO go chasing waterfalls!’ she wrote in the caption, along with rainbow and sun emojis, in a reference to the chorus lyrics of the hit TLC song, Waterfalls, off their second studio album, CrazySexyCool (1994).

Don’t go chasing waterfalls / Please stick to the rivers and the lakes that you’re used to / I know that you’re gonna have it your way or nothing at all / But I think you’re moving too fast,’ the three TLC members sang in the catchy chorus.

The song tackles the issues of the illegal drug trade, promiscuity, and HIV/AIDS. 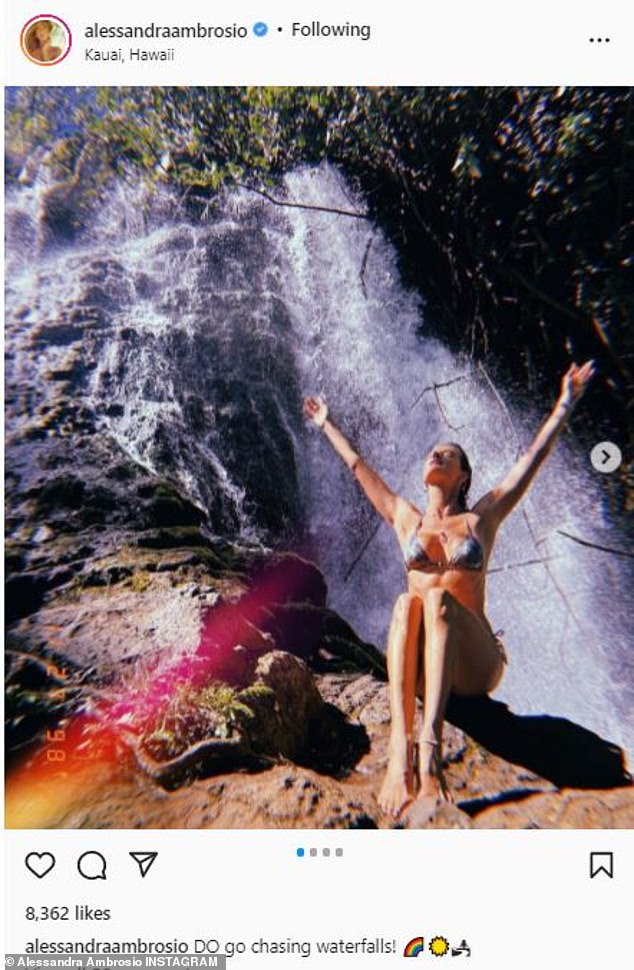 ‘Do go chasing waterfalls’: The Brazilian beauty lifted her arms into the air under the waterfall dressed in a bikini top and Daisy Dukes

Waterfalls, the song, ended up spending seven weeks at No. 1 on the Billboard Hot 100 after it was released as the third single in May 1995.

In all, Ambrosio shared four photos of her waterfall experience on her Instagram page.

In one snap she could be seen exploring the rocky formation, and in another she leans down to washed her hands in the nature spring water.

There’s also two shots of her sitting down under the waterfall: one with her arms outstretched into the air in joy and another as she shut her eyes as the water showered her face and statuesque body. 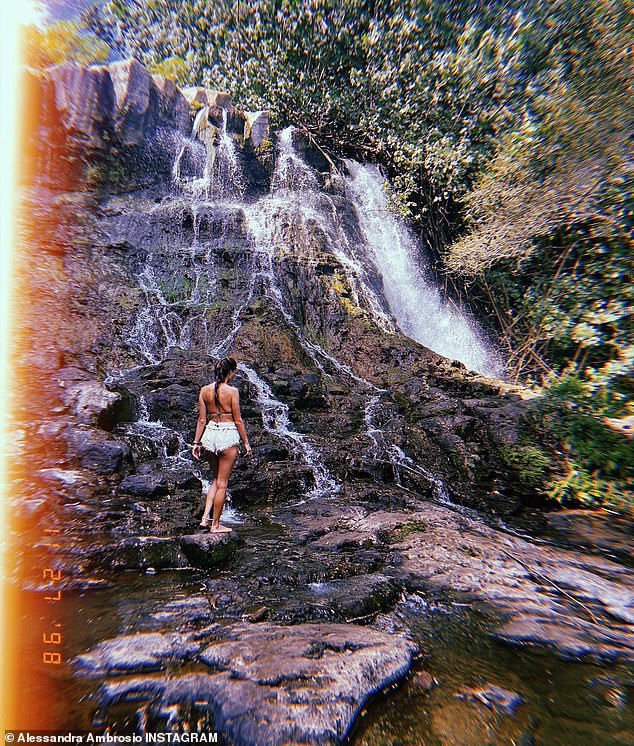 Mother Nature: The supermodel explored the large rock formation where the waterfall flowed 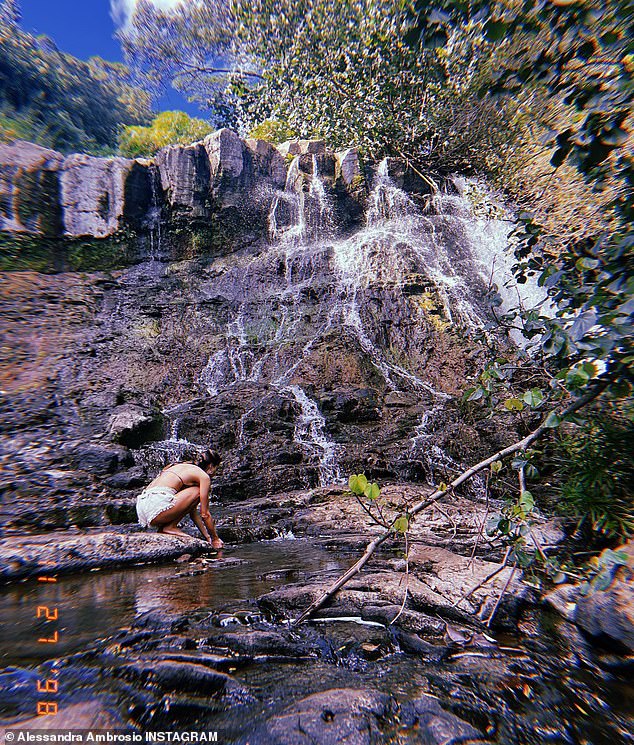 One with nature: The mother of two soaked herself in the lovely nature spring water

The longtime Victoria’s Secret Angel is relishing the scenery of the island of Kauai, Hawaii with some family members and boyfriend Richard Lee

Also known as ‘the Garden Isle’ thanks to the tropical rainforest covering much of its surface, Kauai often serves as the backdrop to major Hollywood films, due in part to its dramatic cliffs and pinnacles of its Na Pali Coast.

Ambrosio and company arrived ahead of the holiday so she and her two children – Anja, 13, and son Noah, nine – got to celebrate Thanksgiving with a dinner that included some local cuisine. 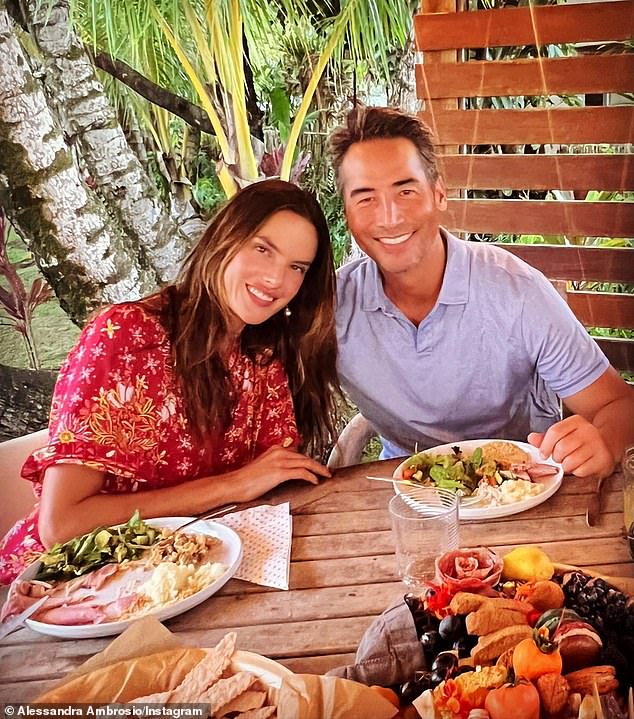 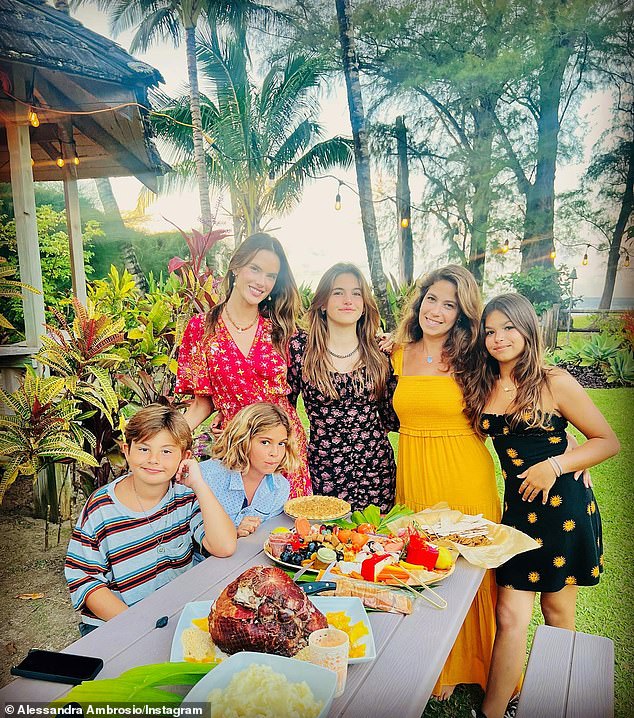 Aloha! Ambrosio and company arrived ahead of the holiday so she and her two children – Anja (center), 13, and son Noah (far left), nine – got to celebrate Thanksgiving with a dinner that included some local cuisine