High schools and universities have reached a deal to ensure all HSC exams will go ahead this year with the results released shortly before Australia Day 2022.

Students will get to see the new exam timetable from Friday but a version was accidentally uploaded on Thursday afternoon which detailed the 19 day schedule.

First up is English on November 9 and then closing out the exam period is food technology on December 3. 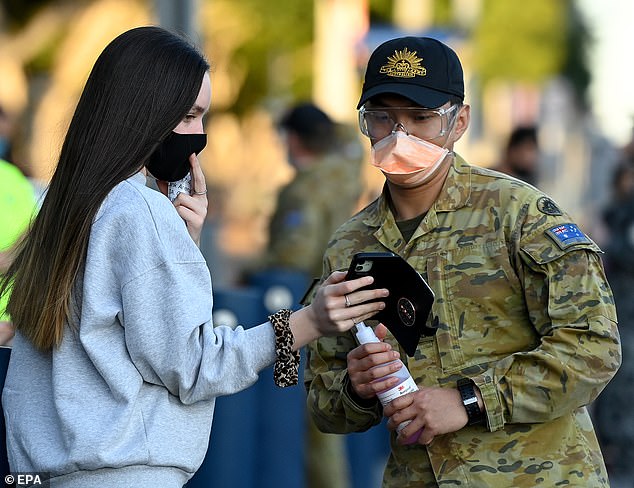 High school students have dealt with more than 18 months of intermittent lockdowns (pictured: Year 12 students at Qudos Bank Arena in Sydney line up for the Pfizer vaccine as defence force troops assist)

Lockdowns and remote learning have been a challenge for NSW high school students for the last 18 months – and there have been doubts over whether some subjects would be left out or whether the exams would be run at all.

In July the authority responsible for managing exams – the NSW Education Standards Authority – announced they would delay exams by one to two weeks in response to the disruptions.

Year 12 students were given more time to prepare for exams or complete their projects – with results, ATAR and university offers to be released as usual.

The October exams were then postponed again on August 27 with the new timetable not released until now.

Results and universities offers will then be sent out to students just before January 26 next year.

NESA released a statement on Thursday afternoon apologising for the ‘inconvenience’ caused by releasing the timetable early and confirmed the schedule would be up from tomorrow.

NSW BACK TO SCHOOL PLAN

October 25: Kindergarten and Year 1 students can return to classrooms.

October 25: Year 12 students doing the HSC can study on campus.

November 8: Other students can return to school.

NESA said the decision to delay exams was ‘based on health advice’.

There was also a question over whether some exams would need to be cut in order for exam administrators to mark and process the work of thousands of students with enough time for universities to offer places before the start of semester.

After discussions were held in the last week, a compromise had been reached that includes no exams being cut, reports the SMH.

‘The universities have been incredibly helpful and open during this process, and clearly want the best result for the students,’ Education Minister Sarah Mitchell said.

‘While I wish we could have provided clarity for students earlier, the sheer scale of the HSC – alongside the unpredictably of the pandemic – made that impossible.

‘We are now in a good position. Students will have their timetables on Friday, all exams will go ahead and their access to university and tertiary education will not be impacted.’ 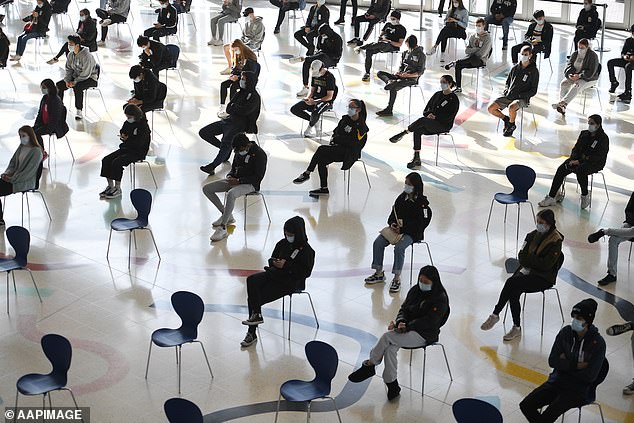 Students will begin a staggered return to classrooms from October 25 (pictured: Year 12’s in Sydney wait to get Pfizer vaccines at the Qudos vaccination hub)

School students will begin Term Four online on October 1 and a staggered return to the classroom will begin from October 25.

NSW Premier Gladys Berejiklian said on Thursday establishing a date for a return to in-person learning in schools was a major focus for the plan out of lockdown.

‘Unlike other venues and adult activity, it is really important for school communities, for students and teachers, to have a fixed date they open to provide certainty,’ Ms Berejiklian said.

‘That is why we nominated October 25. We assumed… by that stage, 70% of adults would be vaccinated and there would be some start of the vaccination for 12 to 15-year-olds.’