Annastacia Palaszczuk has delivered her strongest hint yet that she will drop Queensland‘s hard border in time for Christmas, but issued a stern warning to those refusing to get a Covid vaccine.

The premier posted a cryptic message to Twitter on Wednesday noting we are getting ‘very close’ to Christmas and urging residents to ‘protect’ themselves from the virus.

‘It takes five weeks from the first dose to be completely vaccinated,’ she wrote.

‘Five weeks from today is the 17th of November, that’s getting very close to Christmas.’

Her hint comes as thousands of life-saving Pfizer vaccines risk going to waste in Brisbane due to waning demand, with expiry dates fast approaching.

So far, 71 per cent of Queenslanders have had one jab and 55 per cent are fully-vaccinated – compared to 90.8 per cent and 75.2 per cent respectively in New South Wales. 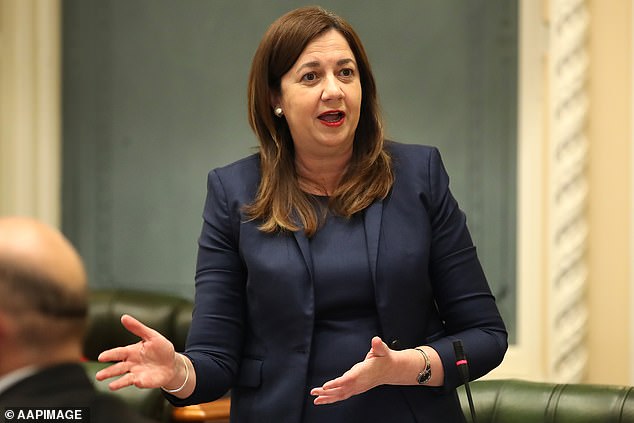 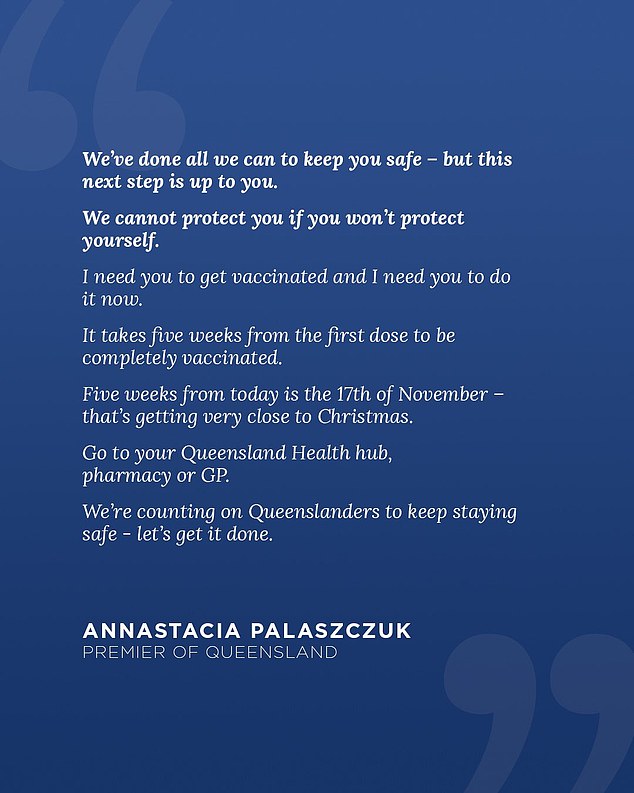 Bookings at a vaccine clinic in Brisbane’s north have also slashed in half, with around 200 appointments this week compared to nearly 500 last week.

Queensland currently has its borders shut to all of NSW and Victoria, resulting in chaos for businesses desperate for tourism and heartbreak for separated families.

The Northern Beaches outbreak last Christmas meant Sydneysiders were unable to travel to Queensland, with the same expected this year as Premier Palaszczuk continued to defy the national plan.

Despite Australia’s states and territories agreeing to a national plan that would see an end to border restrictions, Ms Palaszczuk instead said she would not allow people in from NSW or Victoria if cases were high.

She also rejected the idea Queenslanders would want to travel overseas and said they would be happier checking out their own state.

Her message on Wednesday night suggests that defiance may be waning. 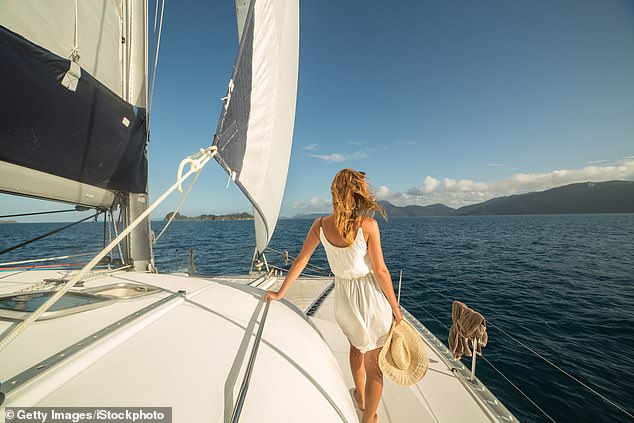 Australians dreaming of a hot summer holiday in Queensland (pictured, a boat in the Whitsundays) may be in luck 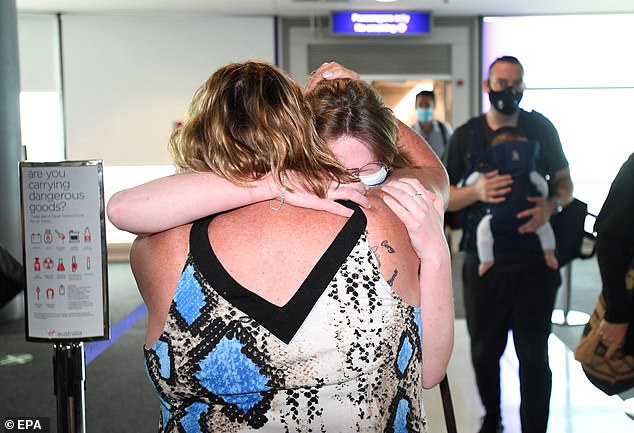 Queensland currently has shut its borders to all of New South Wales and Victoria, resulting in chaos for businesses and heartbreak for separated families (pictured, families reunited last December after flying into Brisbane from Melbourne)

‘We’ve done all we can to keep you safe – but this next step is up to you,’ she wrote.

Queensland currently has the second-lowest vaccination rate of any state at 54.1 per cent, marginally behind Western Australia’s 53.2.

They do however have the latest projected date for 80 per cent, currently on track to hit the magic number on December 11, two days after WA.

Ms Palaszczuk issued a rallying call to Queenslanders, hinting the state may be ready to drop its hard borders.

‘We’re counting on Queenslanders to keep staying safe – let’s get it done,’ she said.

Ms Palaszczuk has repeatedly refused to set a date for reopening Queensland’s borders.

The state’s Health Minister Yvette D’Ath said the state’s ‘target’ was to avoid the 60,000 cases recorded in NSW during its latest Delta outbreak.

‘If someone wants a target, the target is getting yourself protected in the next five to six weeks,’ Ms D’Ath said. 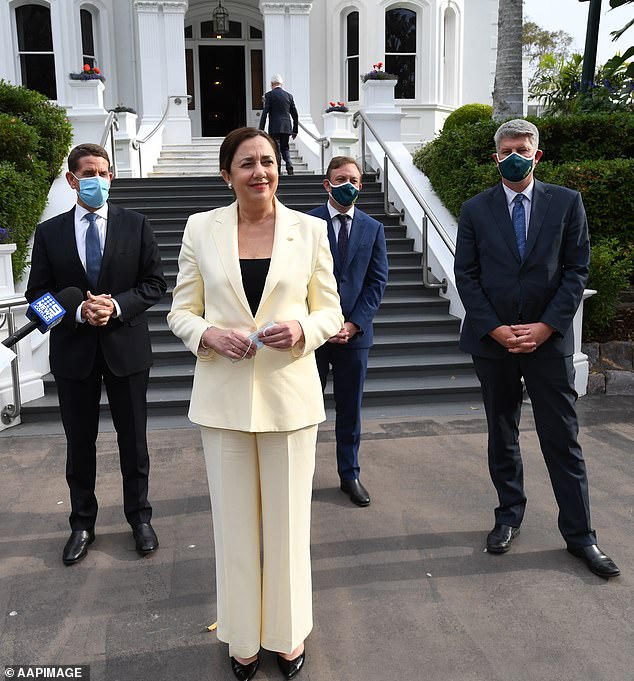 THE PARTS OF QUEENSLAND WITH LAGGING COVID VACCINATION RATES

Double-dose vaccination rate among those over 15 as of October 10:

Last week Ms Palaszczuk named herself as the new Minister for the Olympics, to be supported by Deputy Premier Steven Miles as Minister Assisting the Premier on Olympics Infrastructure.

‘Hosting the 2032 Games will generate $8billion in economic and social benefits, in addition to 91,600 jobs,’ Ms Palaszczuk tweeted on Thursday.

‘It is the catalyst for the biggest infrastructure program our state has ever seen with all levels of government co-operating to deliver projects on time.’

She previously angered Australians after flying to Japan to ‘seal’ the Olympics for Brisbane, with outcry over her taking a valuable hotel quarantine place despite repeatedly calling for fewer international travellers. 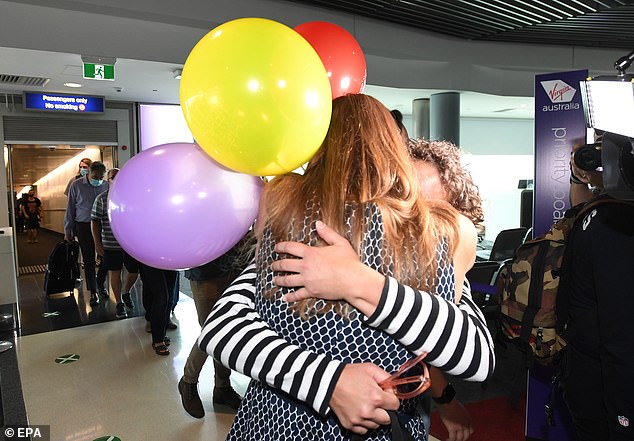 A family is reunited in December, 2020 on the first flight from Melbourne to Brisbane after Queensland dropped its hard borders to the state