A civil rights activist has warned the government it must class right-wing extremism as terrorism or risk a ‘Christchurch’-style attack on Australian minority groups.

Fifty-one people died in Christchurch in 2012 when Australian white supremacist Brenton Tarrant went on a shooting rampage through a busy mosque.

His comments come after pictures surfaced of a group of far-right activists enjoying a weekend away over the Australia Day weekend in western Victoria.

The group of about 30 young men appeared to perform the Nazi salute and sing chants promoting white power in the Grampians National Park.

Dr Abramovich told The Age the event should have sparked greater state and federal responses, and he hopes governments will move to proscribe such groups as terrorist organisations.

‘We do not need to wait for a Christchurch [terror attack] in Melbourne to act,’ Mr Abravomich said.

‘Who would have thought in 2021 Australia, in a week in which we commemorate International Holocaust Remembrance Day, the modern face of Hitler would reveal itself in our state without consequence?’

Dr Abramovich warned that this particular group and others that are similar spew vitriol online and recruit vulnerable members of the community.

‘This group are… taking full advantage of their virtual audience to feed and amplify their vitriolic fantasies about an Aryan Australia, without Jews, Muslims, Aboriginals, the disabled, immigrants, members of the LGBTQI community and anyone else they deem ‘inferior’.

The modern face of Hitler

‘I call on our state and federal governments to lead the fight against the growing problem of racially based extremism by candidly characterising it and advocating that these groups be added to the terror list,’ he said.

Photos taken at the ‘boys trip’ show the group burning a cross – a ritual most commonly associated with the Ku Klux Klan.

Police are reportedly investigating the group and their activities.

Nate Hart was hiking through the Grampians with a friend on Saturday when he passed the group gathered in a cave singing ‘Waltzing Matilda’. 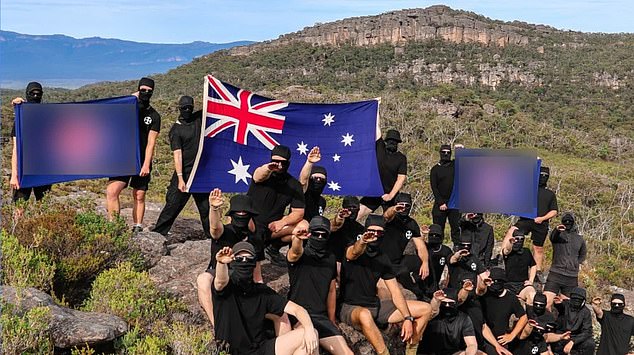 Pictured: A group of white supremacists at the Grampians National Park, performing the Seig Heil

The avid hiker thought the behaviour was strange, but didn’t see it as too out of place because it was the weekend before Australia Day.

It wasn’t until he saw a younger member ‘proudly throw up the Sieg Heil’ that he realised the group was more than singing patriots.

Upon closer inspection, Mr Hart realised most of the men were wearing black shirts with the Celtic Cross – a symbol commonly used by white supremacists.

As he walked away, the men ‘aggressively yelled ‘power of the white man!’,’ Mr Hart wrote on Facebook.

‘It was clear we were in the presence of a group of actual fascists, indeed Nazis, out for a training camp and bonding exercise,’ he said.

‘Young blokes coming together over their shared hatred of others.’

‘They looked like Nazis from a Hitler movie,’ a cafe owner said. ‘And they were.’

One resident told the publication a group member said, ‘we are the Ku Klux Klan’.

Someone else heard the group drunkenly chanting racist slogans while camping illegally at Lake Bellfield – an idyllic spot with panoramic views of the national park.

A local known only as James said he was greeted with the Nazi salute as he rode through Halls Gap on his mountain bike.

‘There were 40 white males, many with skinheads, some chanting ‘white power’. That is intimidating for anyone, let alone the young Asian families sharing the barbecue space,’ he said.

Victoria Police would not comment specifically on the activity in Halls Gap, but told Daily Mail Australia it monitors the behaviour of far-right groups closely.

‘Victoria Police works closely with its state and Federal partners and our Joint Counter Terrorist Team has undertaken a number of investigations covering extremism,’ a spokeswoman said. 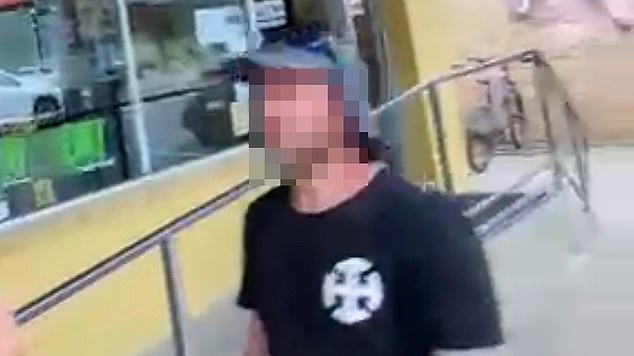 Pictured: A man wearing a black t-shirt with a Celtic logo, which has been used symbolise white supremacy

‘We encourage anyone who has been a victim of a prejudice-related crime to reach out to police for assistance. Every Victorian has the right to feel safe and secure in the community and in pursuing their values, beliefs and interests.’

On Wednesday, federal treasurer Josh Frydenberg – who is Jewish – said far-right groups that attended Invasion Day rallies was ‘frightening for us all’.

Extremists were also condemned by Victorian Premier Daniel Andrews, though he refused to be drawn on individual matters.

‘I would make the point as well, that many would argue, and the international evidence is very clear, and indeed the local evidence, that anti-Semitism is on the rise,’ he admitted on Thursday.

‘It’s an evil thing, it’s a wicked thing, and I just take this opportunity to send a message to the Jewish community across Melbourne and Victoria, you have and continue to make a profound contribution to our state.’