Swathes of Australia are enjoying a cool reprieve from a recent heatwave, with temperatures plummeting by as much as 15C over the Australia Day long weekend.

Most of the nation’s capital cities had sweltered through a heatwave in the past week as temperatures soared into the high 30s and into the 40s.

A five day blistering heatwave peaked in Sydney on Tuesday as thousands flocked to the beach to celebrate Australia Day.

The mercury in the harbour hit 41.6C at the airport on Australia Day – the highest temperature in the state.

Sydneysiders then sweltered through another hot and humid night before a southerly change saw the mercury drop by as much as 15C in some areas to a maxium of just 24C on Wednesday, along with some much needed rain. 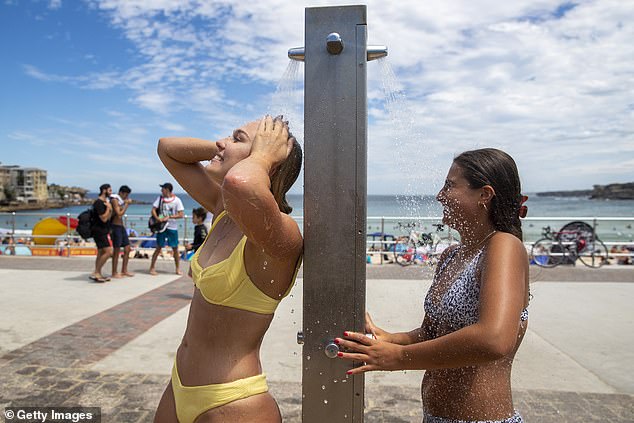 Sydney sweltered through a five day heatwave which peaked on Tuesday. Pictured are beachgoers cooling off at Bondi  on Ausyralia Day as the mercury soared to  37C on the coast

The mercury in Melbourne had also plummeted in recent days to 25C after the city reached a scorching top of 41C on Monday, while Hobart has gone from 34C on Monday to just 17C on Wednesday.

In the nation’s capital, temperatures in Canberra has also dropped from 38C on Monday to 23C on Wednesday.

Temperatures in Sydney will remain in the mid 20s before warming up again for the weekend.

A high chance of showers is forecast for Thursday and Friday with up to 20mm of rain expected to fall both days.

‘Cooler conditions across Sydney and much of southern NSW today and the rest of the week as the school term starts again,’ the Bureau of Meteorology tweeted.

‘A few showers expected, increasing tonight and continuing on and off through till the end of the week.’ 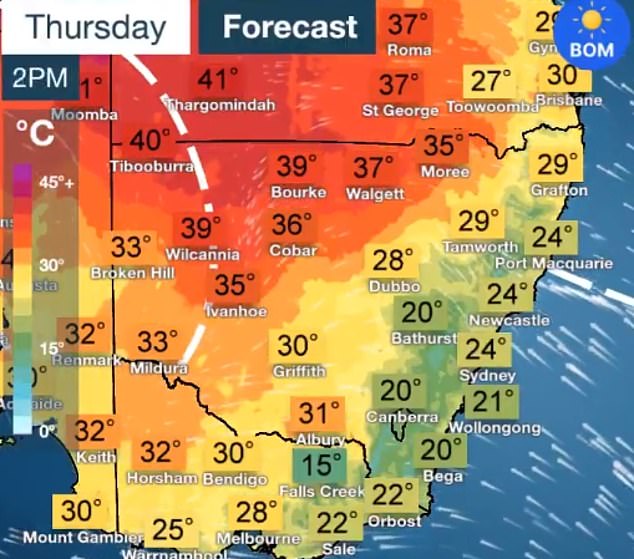 The temperature plummeted by almost 15C overnight in Sydney. Pictured is a view of the drizzling conditions in Sydney’s CBD on Wednesday

Bureau of Meteorology forecaster David Wilkie said the cloudy and drizzly conditions will linger around in Sydney.

‘It’s going to be reasonably wet where we’ll see a continuation of showers, which will get more intense on Thursday, which will continue for the next few days and possibly into next week,’ he told Daily Mail Australia.

‘It’s the result of a southerly change that came through 11pm Tuesday night, which is making its way up the coast.’

Possible showers are forecast for Sydney over the weekend and continue into early next week with up to 8mm forecast for Tuesday.

Temperatures in the state’s north will remain in the 30s and soar into the 40s in the west before the southerly change sweeps through, moving the heat to Queensland.

Elsewhere across Australia, Brisbane will be wet and humid for the rest of the week with showers and temperatures in the lows 30s forecast.

The system in the Gulf of Carpentaria, west of the Cape York Peninsula, moved over land on Monday.

The cloudy and rainy conditions will linger around in Sydney until at least early next week. Pictured is the view of Barangaroo and Sydney Harbour on Wednesday 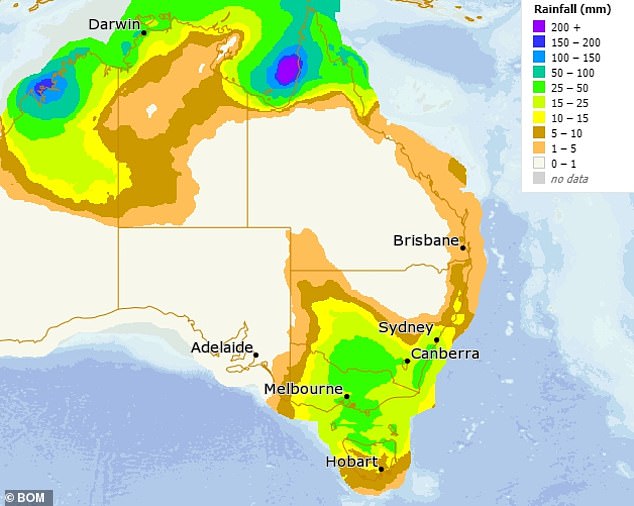 Meteorologist Rosa Hoff says the system’s passage over land has prevented the storm from strengthening into a cyclone.

It will no longer bring gale-force winds to the region but will still lead to higher than normal tides and heavy rainfall.

Downpours of 100mm to 180mm in just six hours are expected with flooding a risk.

‘Heavy rainfall which may lead to flash flooding remains a threat for central parts of the Cape York Peninsula all the way through until tomorrow,’ Ms Hoff said in an alert.

The storm is expected to track east of the peninsula and out over the Coral Sea.

In Victoria, strong easterly winds will develop across the state’s south on Wednesday night, sparking a severe weather warning.

Showers will linger around in Melbourne for the rest of the week until Sunday.

The wettest day will be Friday with 15-30mm forecast. 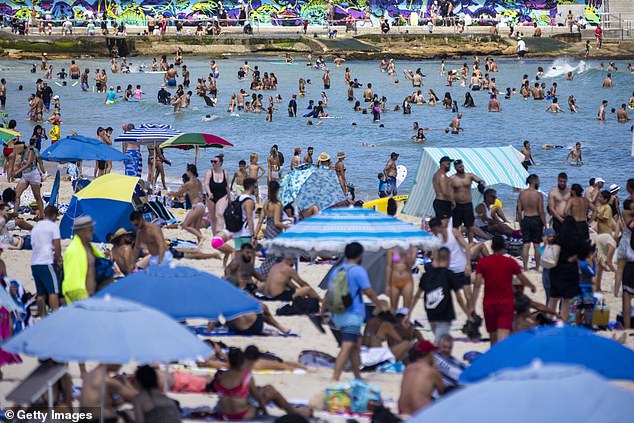 Sydneysiders swapped bathers for umbrellas on Wednesday as temperatures plummeted. Pictured is a packed Bondi Beach in the 37C heat less than 24 hours earlier on Tuesday

Adelaide will be partly cloudy for the rest of the week with temperatures remaining in the high 20s and low 30s in the wake of last weekend’s 40C-plus heatwave.

In the west, Perth will warm up in the coming days to 37C on Saturday, continuing into the early part of next week.

Hobart will be cool and cloudy before rain arrived on Friday.

‘Make the most of a moderate day as later in the week things could get soggy,’ the Bureau of Meteorology tweeted.

Conditions will be wet and humid in Darwin for the next week with rain and possible storms forecast every day. 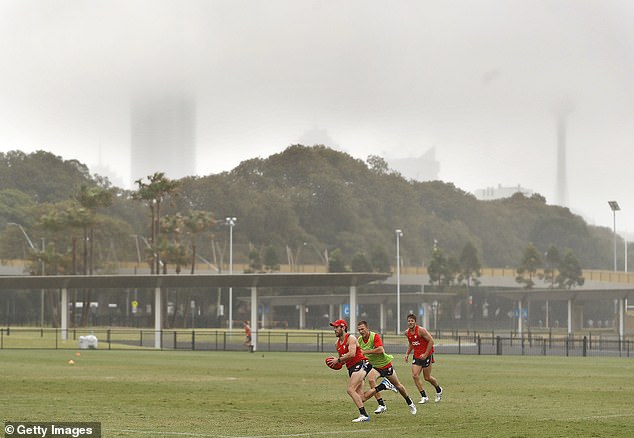