A huge band of thunderstorms are forecast to roll in across Melbourne today after parts of Victoria were inundated by heavy rain on Thursday night – with some towns recording a whopping 24mm of rain in just an hour.

In New South and Queensland, chilly weather follows a severe heatwave earlier this week and the hottest Australia Day since 1960.

Grey and dreary conditions are also set to continue across most other capital cities with summer temperatures dropping into the low 20s.

The drizzly weather is set to linger into the weekend. 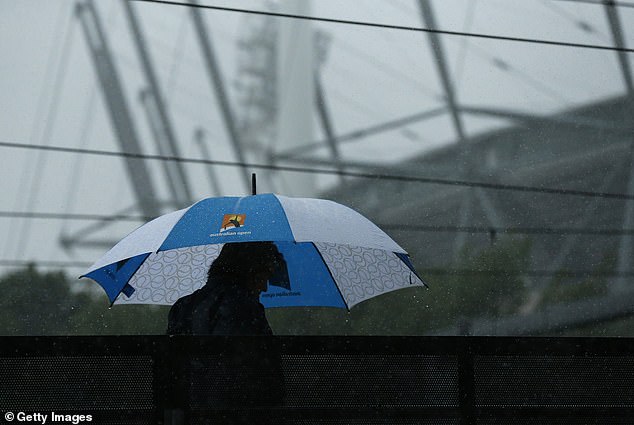 Steady rain and dark clouds are seen at Melbourne Park on January 29, 2021 in Melbourne, Australia 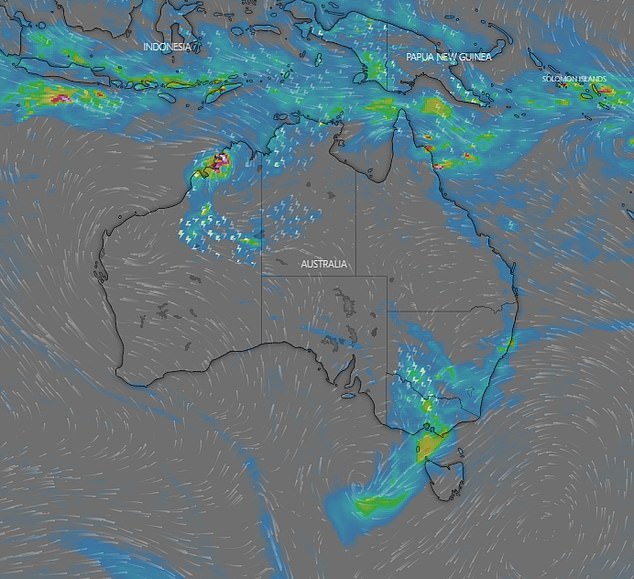 A map of Australia on shows the rain forecast to lash NSW, Victoria, QLD and WA on Friday

The State Emergency Service in Victoria has urged people to stay off the roads and  avoid travel if possible – with floodwater, debris, reduced visibility and fallen trees all potential hazards for motorists.

Victorians have also been warned to secure loose items like outdoor furniture and trampolines.

‘This rain is due a trough ahead of a cold front that is dragging in tropical moisture from the northwest of Australia,’ Weatherzone meteorologist Craig McIntosh told Daily Mail Australia.

‘It’s going to hang around all day today but it should start to clear overnight and be gone by early Saturday morning.’

Stawell was hit with 24.6mm of rain in under an hour between 3am and 4am, while Mount William recorded a 67.6mm deluge over 24 hours. 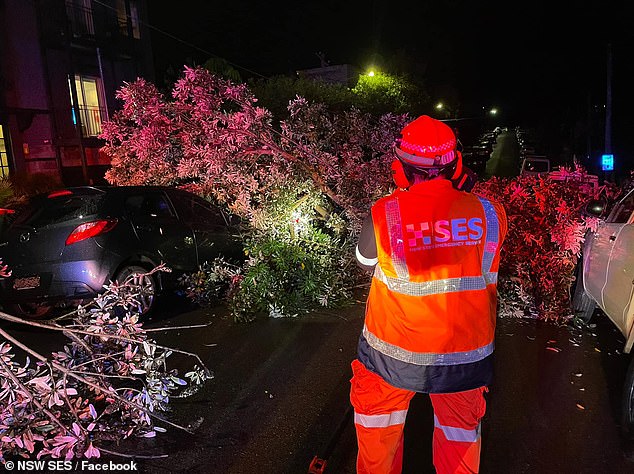 Three vehicles were damaged last night due to storms, when a large banksia branch dropped in Sydney. Pictured: A member from NSW SES Randwick Unit 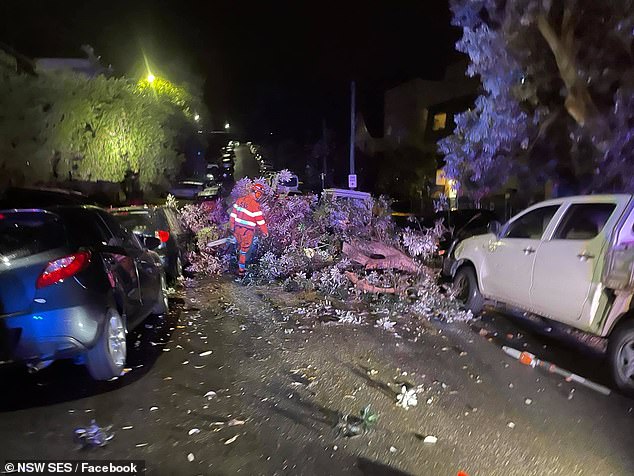 Other towns which copped heavy falls included Navarre with 53.6mm, Stawell with 52.8mm, Ballarat with 34mm, Westmere with 32.4mm, Warracknabeal with 31mm and Charlton with 21.2mm.

The State Emergency Service received about 60 call for assistance overnight.

A spokesperson told The Herald Sun 25 of those calls were for flooding and water coming through roofs.

Forecasters say it’s possible that up to 90mm of rain could hit some parts as the day goes on.

The Bureau of Meteorology has warned Bendigo, Shepparton, Seymour, Maryborough, Ballarat, Wodonga, Stawell and Wangaratta are at risk of flash flooding. 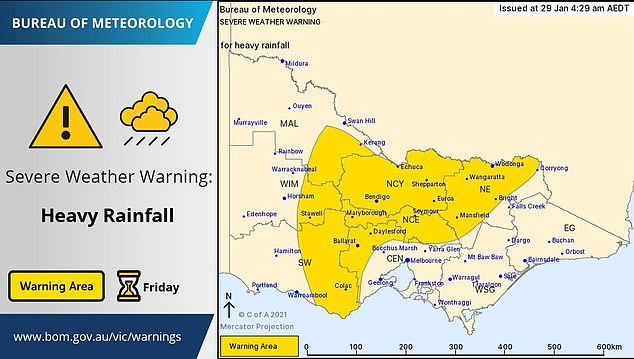 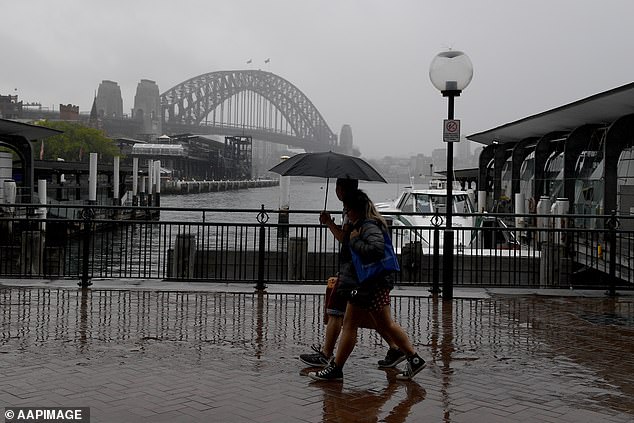 Onshore winds are driving showers across Sydney throughout today and over the weekend. Pictured: A couple caught in heavy rain on New Year’s even

Meanwhile, Sydney suffered its wettest day of the year so far yesterday with 19mm of rain falling in some parts.

More rain is also expected on Friday with a severe weather warning for heavy rain is in place for the Central West Slopes and Plains, South West Slopes, Riverina, Lower Western and Upper Western areas of NSW.

‘Onshore winds are driving showers across Sydney throughout today and over the weekend,’ Mr McIntosh said.

‘Then a cold front is expected to move in on Tuesday bringing heavier showers and possible storms to the Harbour City.’

Heavy falls are also possible in the ACT and Canberra where it will remain cloudy with a top of 19C.

The Bureau of Meteorology has also warned of severe weather in Far North Queensland as a tropical low moves east across Cape York Peninsula.

The weather event is ‘bringing heavy rainfall to the region’. 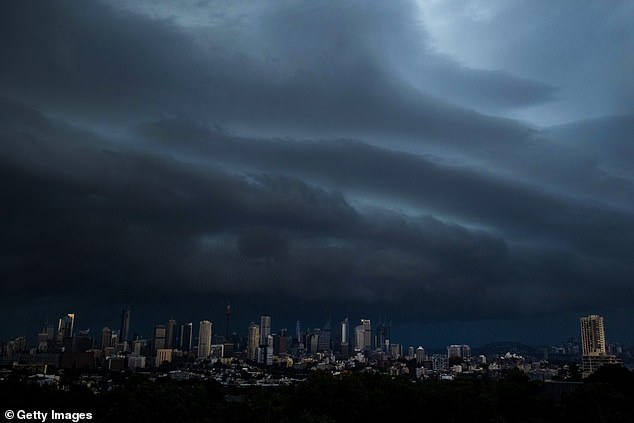 Storm clouds are seen over the Sydney skyline on January 4. Rain is forecast for the Harbour City after a heatwave

‘A Flood Watch and Severe Weather Warning are current,’ the bureau said.

‘Monsoon activity is expected to remain high for the coming days.’

A severe weather warning has also been issued for Western Australia’s Kimberley district as a tropical low lies about 100km west of Wyndham.

‘The low is expected to cause frequent showers and thunderstorms over the Kimberley for the next couple of days,’ the bureau said.

The state’s capital city, Perth, is enjoying sunny conditions for the remainder of the week with a high of 31C on Thursday and 34C forecast on Friday. 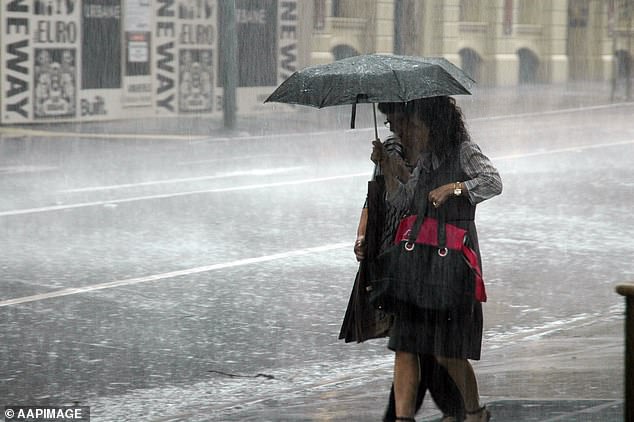 Pictured: A couple shelter together from the rain with a black umbrella 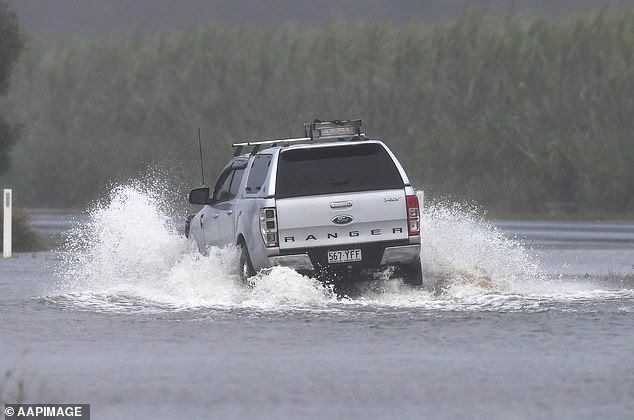 The Bureau of Meteorology has released flash flooding warnings for parts of Victoria, Queensland and Western Australia

A shower or two is forecast in Brisbane on Friday and Saturday, with temperatures reaching the high 20s.

The rain in the Queensland capital is likely to continue into next week with a possible shower forecast on Sunday and Monday.

South Australia has also copped the brunt of the rain, with Adelaide recording its wettest January day since 1977 with 29.8mm in the 24 hrs to 9am on Australia Day.

Early morning showers are also expected in the city on Friday morning, with a high of 27C, before the rain clears for the weekend.

A maximum of 21C is forecast in Hobart on Friday with rain developing, while Canberra will hit 20C with showers expected.

Darwin will be hot in the 30s with rain and a possible storm. 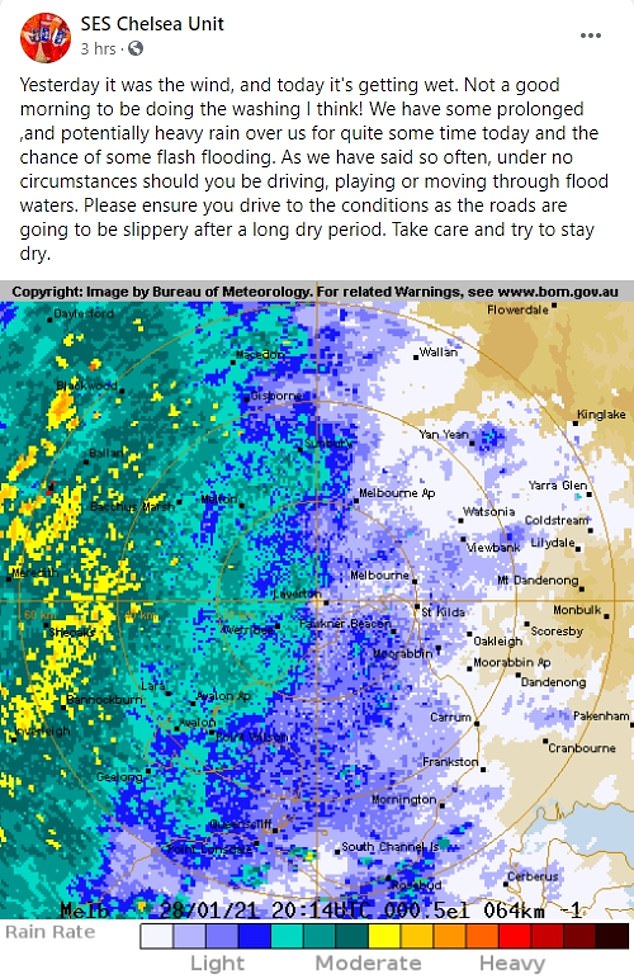 How teen, 17, was let out on bail for 50 offences before ‘mowing down couple’ #englishheadline #teen #bail #offences #mowing #couple