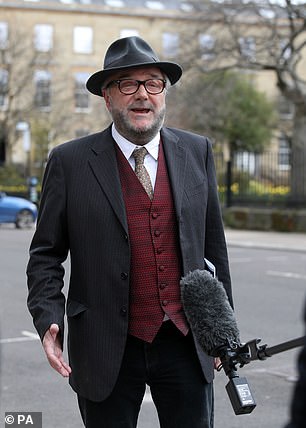 Tories have raised the prospect of Labour coming a catastrophic third in the Batley & Spen by-election, saying George Galloway seems to be ‘destroying’ the party’s campaign.

Senior politicians who have been on the ground in the Red Wall constituency say that the hard-Left former MP has been ‘hoovering up’ votes from Muslim communities.

Reports at the weekend suggested his tough stance on anti-Semitism after replacing Jeremy Corbyn – and his neutral stance over recent violence in Israel and Palestine – has cost him the trust of some Muslim voters.

Even his wife Victoria’s Jewish heritage apparently being cited as one reason not to vote Labour, something branded ‘repellent and repugnant’ by party sources.

One experienced Conservative source who has spent a lot of time there told MailOnline that turnout would be crucial, but estimated they could end up with 14,000 votes on July 1 and Mr Galloway might rack up as many as 12,000 votes, with Labour trailing far behind.

Both Labour and Tory HQ played down the suggestion that Mr Galloway could take second place. A Conservative source tried to dampen expectations saying: ‘We think it is neck and neck. It is Labour’s to lose.’

A Survation poll carried out earlier this month put the Conservatives on 47 per cent, with Labour on 41 per cent and Mr Galloway on 6 per cent.

However, constituency surveys are notoriously difficult to conduct and the varied demographics in Batley & Spen complicate the task. 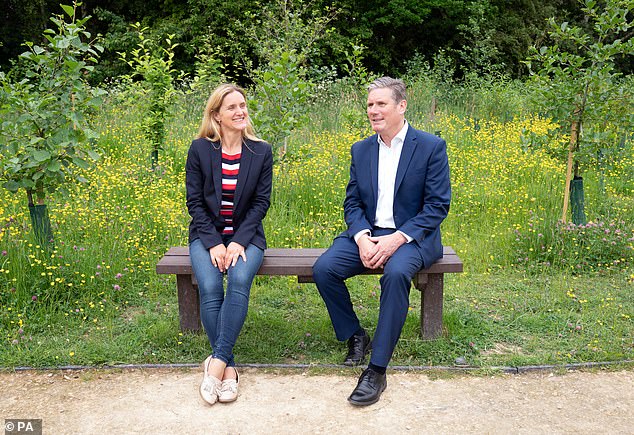 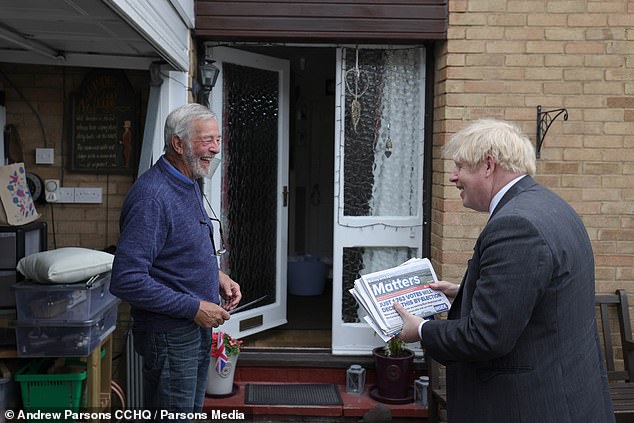 But veteran campaigners are relentlessly downbeat about their prospects. Mr Galloway has been accusing Sir Keir of failing to stand up for Palestine and saying local voters have a chance to topple the leader.

Speaking to The Mail on Sunday, Muslim voters vented their anger at what they claimed was the Labour leader’s failure to speak up for Palestinians in Gaza being bombed by the Israelis.

A spokesman for Mr Galloway said ‘a few people’ had mentioned Mrs Starmer’s religion but stressed the party always reacted by reminding voters ‘we must be tolerant of everybody’s beliefs’.

‘People have just had enough of us,’ one former Labour MP who has been out knocking doors told MailOnline. ‘They have given up on Labour.’

The ex-MP said they were not sure how bad the result would be, but feared the by-election would be the next installment in the ‘culture war’ and ‘identity politics’.

‘We are a coalition of woke,’ they lamented, pointing out that the Tories would not have sent Boris Johnson to the seat on Friday unless they expected to win. ‘We have got to work out what we stand for.’

A shadow cabinet minister told MailOnline that Batley & Spen was far harder to read than somewhere like Hartlepool – which Labour disastrously lost to the Tories last month – because the demographics were so variable.

‘It is a really difficult constituency to gauge,’ they said. ‘It is a series of different settlements. Batley is ethnically mixed, there are white small town areas… Hartlepool was much more homogenous.’

Referring to the response on the doorstep they said: ‘I wouldn’t say warm, but it is not unfriendly.’

Another former Labour MP who knows the area well said they would not be surprised if the party came third but added: ‘That would be a disaster.’

The senior Tory source involved in the Batley & Spen campaign said: ‘We are worried about Galloway. The question mark is all about turnout.

‘We have got to get our vote out, and we should win it. I think Galloway will hoover up the Muslim vote – almost all of it.

They added: ‘No doubt about it, I think Galloway has destroyed the Labour Party in this seat.’ 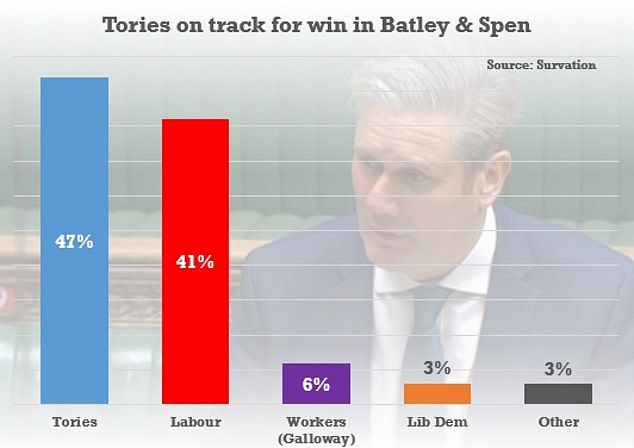 A Survation poll carried out between June 9 and 17 put the Conservatives on 47 per cent, with Labour on 41 per cent and Mr Galloway on 6 per cent

The Tory campaigner said the PM had an ‘unbelievable’ response when he visited on Friday and was ‘cheered to the rafters’. ‘His popularity is very strong,’ they said.

Defeat in the by-election – let alone coming third – would be almost certain to trigger a left-wing bid to oust Sir Keir.

Last week Labour turned in its worst ever by-election performance receiving only 1.6 percent of the vote in Chesham & Amersham – as the Lib Dems stormed the previously safe Tory seat.

Amid dire personal ratings rivalling those of Jeremy Corbyn at the same stage of his leadership, Sir Keir has shaken-up his team by axing chief adviser Jenny Chapman ahead of the crunch Batley and Spen by-election.

Baroness Chapman will leave her role as political director but will take a seat in the shadow cabinet instead as the party’s Brexit spokeswoman, shadowing Lord Frost.