Germany Strongly bonded male baboons hold each other back when it comes... 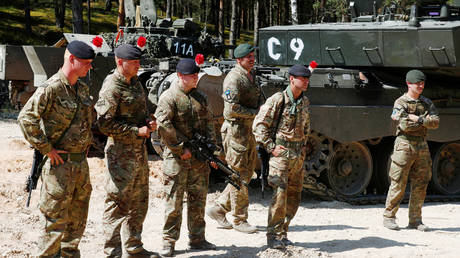 New army recruits will receive sexual consent training under plans to end inappropriate behaviour towards women, according to an army briefing paper, after a report found two-thirds of women in the military experienced harassment.

On Monday, UK Defence Secretary Ben Wallace presided over a meeting of army stakeholders in which commitments were made to tackle gender discrimination within the force, The Times reported.

General Sir Mark Carleton-Smith made it clear that the army was “not standing still” when it came to tackling culture and conduct problems. The general claimed there were “core and cultural issues” in the army that needed addressing after a “full and frank” discussion with Wallace.

Citing an army briefing paper, The Times reported that the Royal Military Police will provide sexual consent training for all recruits to ensure that they start their careers “under no illusion of what is unacceptable.” According to the internal document, the aim is to “educate on the complexities of consent.”

Also on rt.com
US Marines deny British commandos ‘dominated’ them during war games


Before the meeting, Wallace contended that the Army was far behind the public sector on matters relating to enabling women. The gathering is the first of its kind called by the defence secretary.

The meeting comes amid increased scrutiny about justice for a Kenyan woman who was allegedly killed by a British soldier in 2012.

A parliamentary inquiry concluded in July that two-thirds of women in the armed forces have experienced bullying, sexual harassment, and discrimination during their career. The paper accused the UK military of “failing to protect” female recruits.