The cost of UK gas for November delivery shot up 40 per cent yesterday morning following a steep increase over the past month prompted by a shortage of gas flowing into Europe and the UK.

Even after falling back later in the day when Russian President Vladimir Putin promised to boost supplies to Europe, gas contracts are still trading at almost five times the level they were at the beginning of the year. 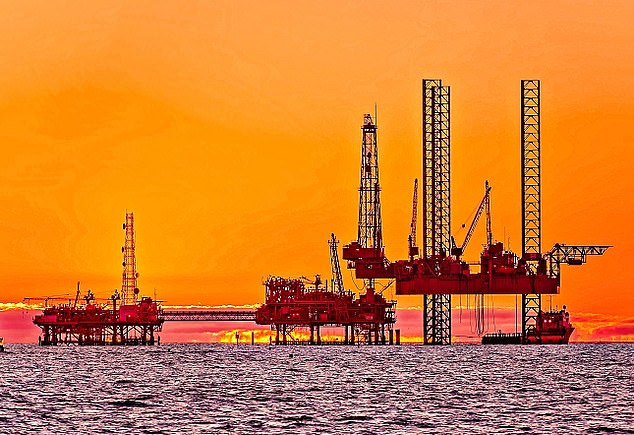 Energy crisis: The cost of UK gas for November delivery shot up 40 per cent yesterday following a steep increase over the past month

While the UK is particularly vulnerable due to its lack of storage, countries across the globe are struggling with the same problems.

Rising inflation is a headache for the Chancellor as he prepares to deliver his Budget on October 27.

The Retail Price Index (RPI), a measure of inflation, sets the interest bill for £486billion of the UK’s towering £2 trillion debt pile. If RPI climbs, pushed up by energy costs, the Government’s interest bill will also spiral higher.

Economists at investment bank BNP Paribas think that if RPI were to average 4.8 per cent for the year, this would add another £13billion to the interest paid on the national debt.

Inflation also dictates other government expenditure, such as the rise in the state pension.

September’s jump in the cost of living will set the increase for the state pension from next April –and is likely to add billions to the spending bill.

If the Retail Price Index – a measure of inflation – climbs, pushed up by energy costs, the Government’s interest bill will also spiral higher

Interest rates demanded by investors who buy government bonds are also rising, amid expectations that the Bank of England will have to hike its base rate from 0.1 per cent.

But investors are now pricing in a rise to 0.25 per cent next February – and some think a rate hike could come next month.

This has pushed up the cost of government borrowing. Yields on ten-year gilts, or how much investors demand to be paid for lending the state, hit a two-and-a-half-year high of 1.14 per cent yesterday, before settling around 1.08 per cent.

Laith Khalaf, at AJ Bell, said: ‘Rising interest rates would be extremely negative for government finances, where debt costs have been suppressed by loose monetary policy.’

He noted that quantitative easing, which was re-started last year to inject money into the economy during the pandemic, had effectively pegged £875billion of the national debt to the Bank’s base rate.

Khalaf added: ‘In its Budget forecasts in March, the OBR estimated that if interest rates were 1 per cent higher, that would add £20.8billion to the Government’s debt interest bill in 2025-26.

‘To put that in some context, that would wipe out all the £8.2billion gain the Treasury expects from freezing income tax allowances, as well as a sizeable chunk of the £17.2billion projected to roll in from the rise in corporation tax.’

Sunak had been hoping to unveil his Budget with a bit of breathing room. The initial economic recovery from the pandemic earlier this year, turbocharged by the vaccine rollout, was stronger than expected.

As a result, borrowing has undershot the gloomy forecasts which the OBR made in March.

But rising inflation means the pressure is now back on.

But Kay Neufeld, director at the Centre for Economics and Business Research, said: ‘Inflation has got to the point where it should be a headache for the Chancellor… it is one additional problem that you don’t need.’