CHRIS FOY: South Africa’s staff are just as bad as Rassie Erasmus, with team physio Rene Naylor walking on the field with Springboks on the try-line… and the Six Nations is impossible to call

By Chris Foy for the Daily Mail

A breathtaking weekend of rugby saw big wins for England, Wales and France.

Chris Foy gives his thoughts on all the action…

Boks staff as bad as Rassie

The absence of their water-carrying director of rugby, Rassie Erasmus, didn’t stop the Springboks from maintaining an antagonistic touchline presence at Twickenham.

Team physio Rene Naylor — a vocal nuisance during the Lions series — was almost knocked over by Frans Steyn at one stage, after walking on the field as the visitors were attacking England’s line. Such incursions are a scourge and must stop. 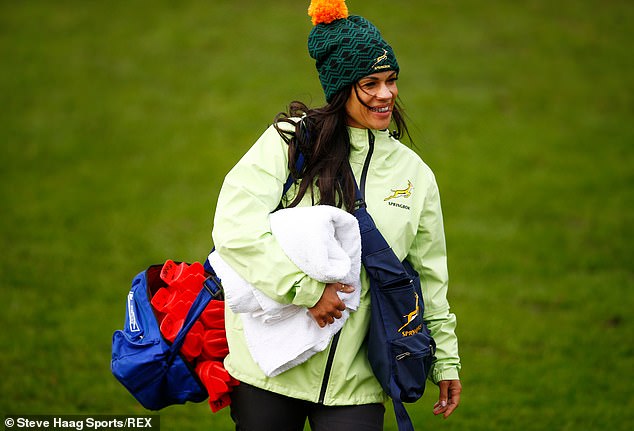 All Blacks head coach Ian Foster is likely to face an uncomfortable reception back in New Zealand, where public polls are calling for him to be replaced by the architect of the Crusaders’ recent successes, Scott Robertson.

Defeats by Ireland and France have created a sense of Kiwi unrest — and highlighted the folly of subjecting a weary squad to additional ‘money matches’.

England fans getting closer look at players than ever

A new tradition is taking shape at Twickenham. England players have enjoyed prolonged laps of honour after each autumn match — and many of them have hopped over the advertising boards to join family and friends in the stands.

Nearby spectators have relished the close-up view and it is good to see stadium officials have not intervened to spoil the interaction.

Six nations will be 5-star

Good luck predicting the Six Nations. France are now favourites but there will be five competitive teams.

England can challenge the French for the title, but Scotland will believe they can ambush the ‘auld enemy’. Wales are the holders, but Ireland have just beaten the All Blacks. The only good bet is on no Slam.

The fortunes of certain teams have a disproportionate bearing on the overall health of the sport. That much is certainly true in the case of France.

The game is poorer when they are sub-standard; too Anglo-Saxon, narrow and colonial. But they are a force again and that is wonderful news, for variety and mass-market appeal. Test rugby has become more interesting again.

His dismissal was absolutely deserved, for a cheap shot on Cian Healy at a ruck which left Peter O’Mahony raging: ‘Hard man, aren’t you?’ Such gratuitous, unnecessary clean-outs are a scourge of the sport which endanger vulnerable players. They must be eradicated.