Claudia Schiffer is sharing some of her favorite photos and memories from her 90s heyday, from discussing licorice on the set of a Vogue shoot with Helena Christensen to the ‘euphoric’ feeling she had while posing with Christy Turlington, Naomi Campbell, Linda Evangelista for Versace.

The 51-year-old supermodel has picked the pictures from her past to appear in a new coffee table book, ‘Captivate! Fashion Photography from the 90’s,’ out November 30, as well as a photo exhibition at the Kunstpalast Art Museum in Düsseldorf, Germany, which is on display until September 2022.

In curating the book and exhibition, Claudia took a walk down memory lane and reflected on working with her fellow supermodels, as well as such iconic photographers as Herb Ritts, Karl Lagerfeld, Peter Lindbergh, and Mario Sorrenti.

In addition to including their instantly-recognizable photos, she’s also included never-before-seen images from her personal archive, including 90s Polaroids from her first test shoots and a self-portrait she took with Helmut Newton. 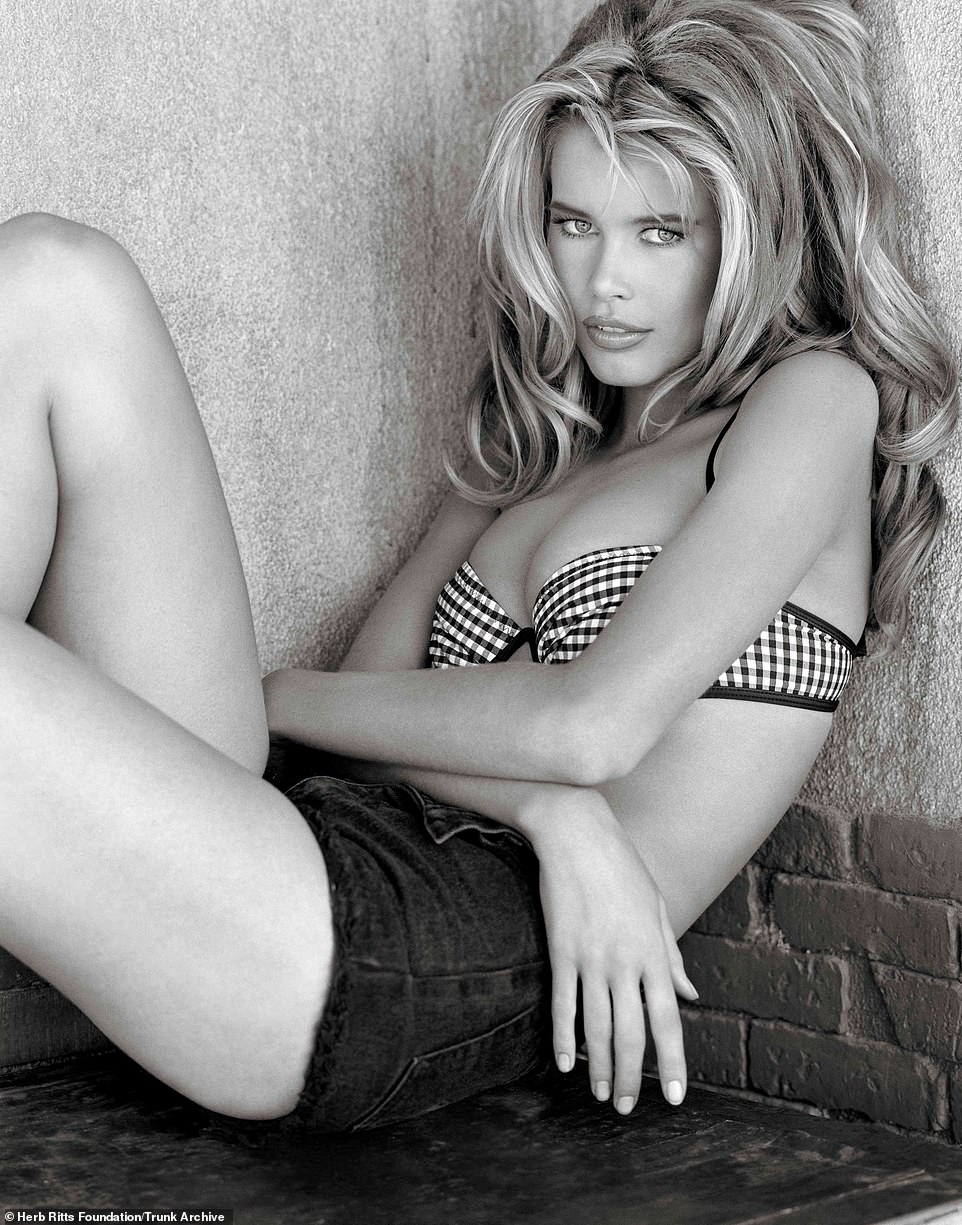 Claudia Schiffer is sharing some of her favorite photos and memories from her 90s heyday in a new coffee table book and exhibition. One highlight is this photo Herb Ritts shot of her for her Guess fragrance campaign in 1992. She told Dazed that Ritts ‘made his subjects feel absolutely at ease and he embraced the personality of the model.’ She said he ‘never got it wrong’ and ‘his pictures didn’t need retouching’ 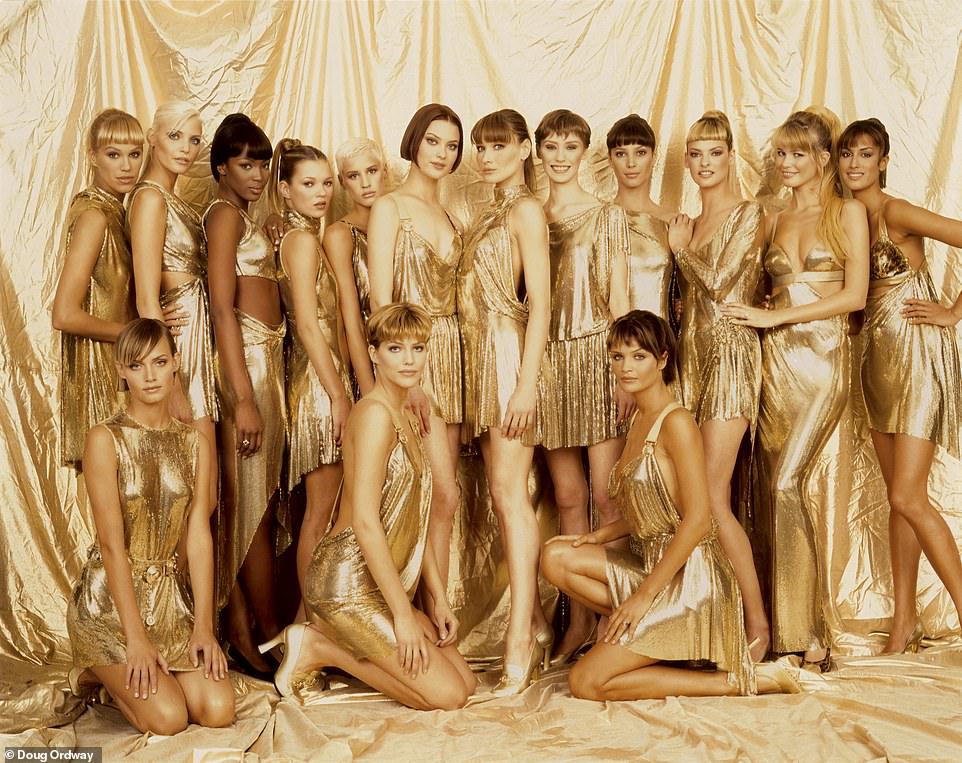 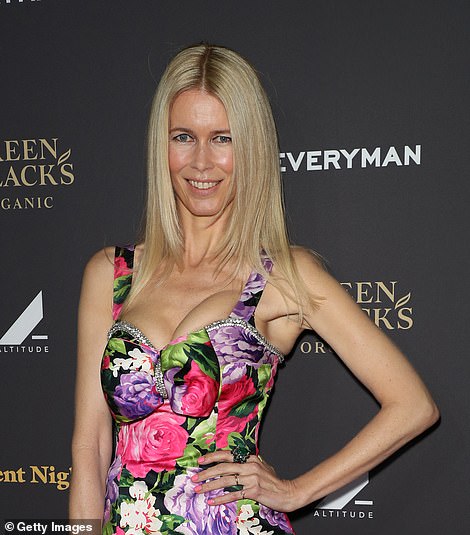 Claudia (pictured on November 15) worked on the project during lockdown

Claudia worked on the project during lockdown, and told British Vogue it gave her ‘time to reflect on the phenomenon of supermodels.’

‘As the economy picked up, the supermodel’s role was to project the image of a brand across the world at a time when fashion was expanding globally,’ she said.

The decade was also transformative for the entire fashion industry.

‘The 1990s was a watershed period that upturned ideals of beauty and fashion,’ she told Harper’s Bazaar. ‘Campaigns became a valued part of visual culture, and fashion photography became a new, democratic art form.’

Fashion in media boomed, from Vogue to MTV to new magazines like i-D and V Magazine

‘The ’90s gave way to the birth of the supermodel but also the superstar designer, stylist, and photographer,’ she said. ‘And the fashion! Wearing a Chanel jacket with vintage jeans, body-con Alaïa dresses and sneakers, Marc Jacobs’s grunge or a Helmut Lang suit — it was high-low mix that was individual, fun, and cool.’

One of her favorite memories from her career was an ‘amazing shoot’ she did with photographer Arthur Elgort in Rome for Valentino’s Spring/Summer 1995 Ready-to-Wear campaign. 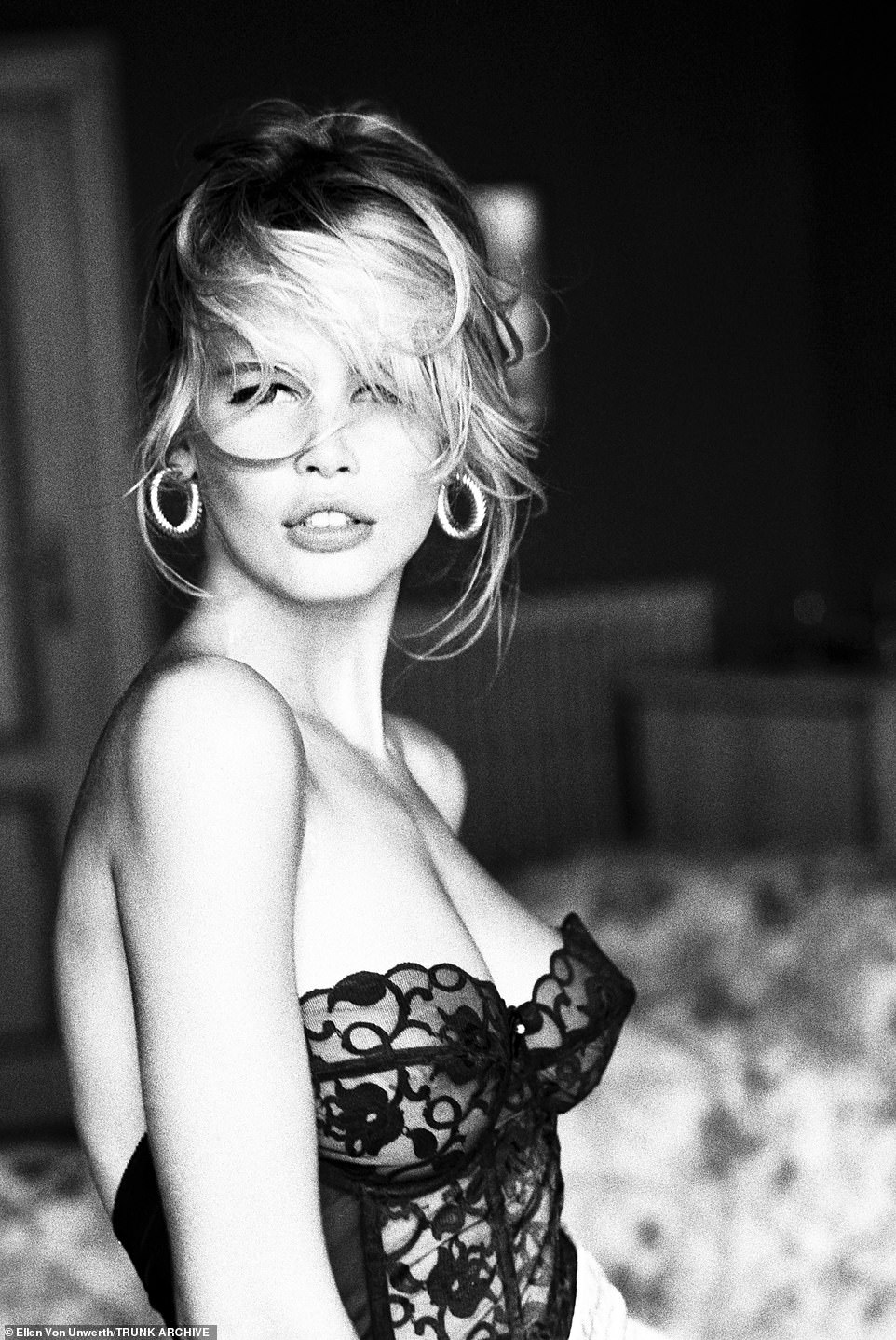 Claudia shot to stardom with this Guess campaign, which was shot by Ellen von Unwerth in 1989. ‘The chemistry between photographer and model is vital, as is a sense of trust. Ellen von Unwerth’s speciality is to ask the model to move and express herself freely, rather than focus on a still pose. This shoot was one of many for Guess Jeans in Marrakesh and was one of their most successful campaigns,’ Claudia said 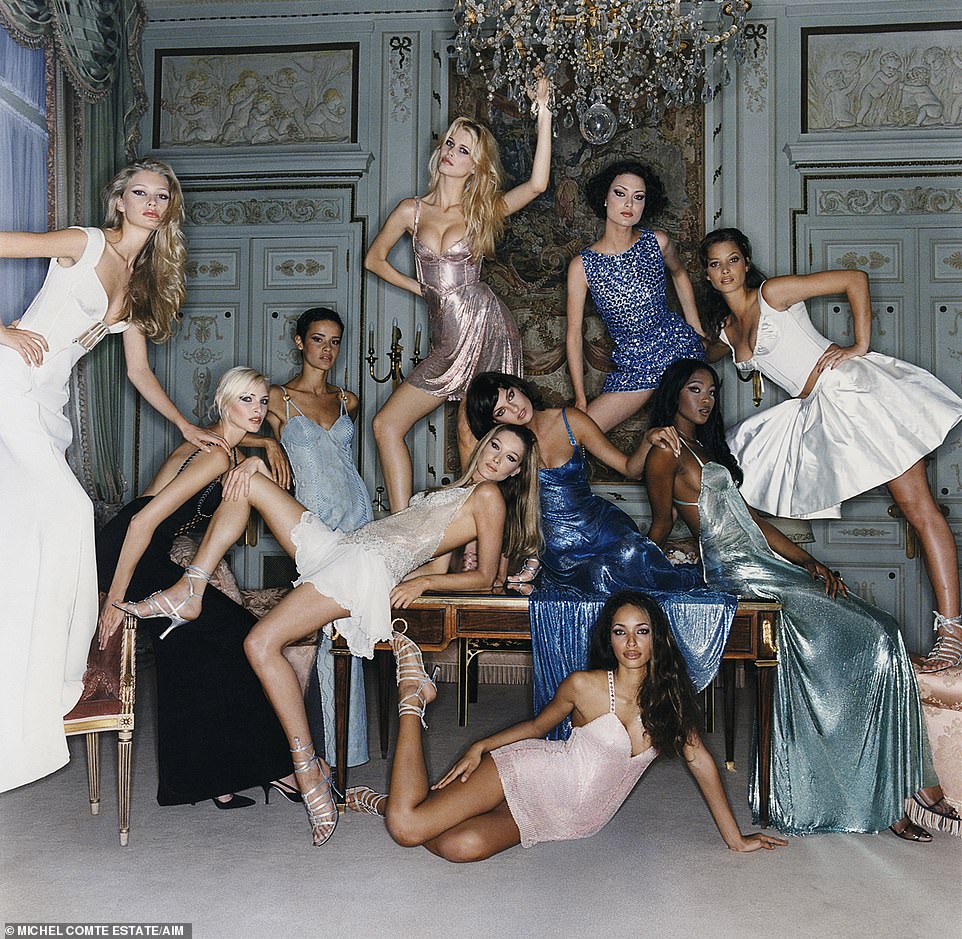 Claudia described this shot as capturing ‘a high-energy, classic 1990s Versace moment.’ She told the Post, ‘We went straight from the catwalk to shoot for Italian Vogue in Versace’s palazzo and on to a party together in the same aqua-toned dresses.’ Pictured are (clockwise from left) Kirsty Hume  Nadja ­Auermann, Nadège du Bospertus, Claudia Schiffer, Carla Bruni, Christy Turlington, Shalom Harlow, Naomi Campbell, Linda Evangelista and Brandi Quinones

The shot was based on Federico Fellini’s film La Dolce Vita, and Claudia played Sylvia.

‘Throughout the day, we attracted more and more attention until life finally imitated art: We were chased through the streets by paparazzi and crowds, just like Sylvia’s character in the movie. In one balcony scene, a crowd of people formed below, and when I was directed to wave out at them, they responded by chanting my name. It was surreal,’ she said.

Another career highlight was when she posed for German photographer Ellen von Unwerth in Paris when she was just 17.

‘We were both starting out and got on like a house on fire, just mucking around next to the Centre Pompidou with me in my own clothes,’ she recalled.

The photos clearly turned out well, because when the people at Guess saw them, they hired her for a Guess Jeans campaign — and the rest is history. 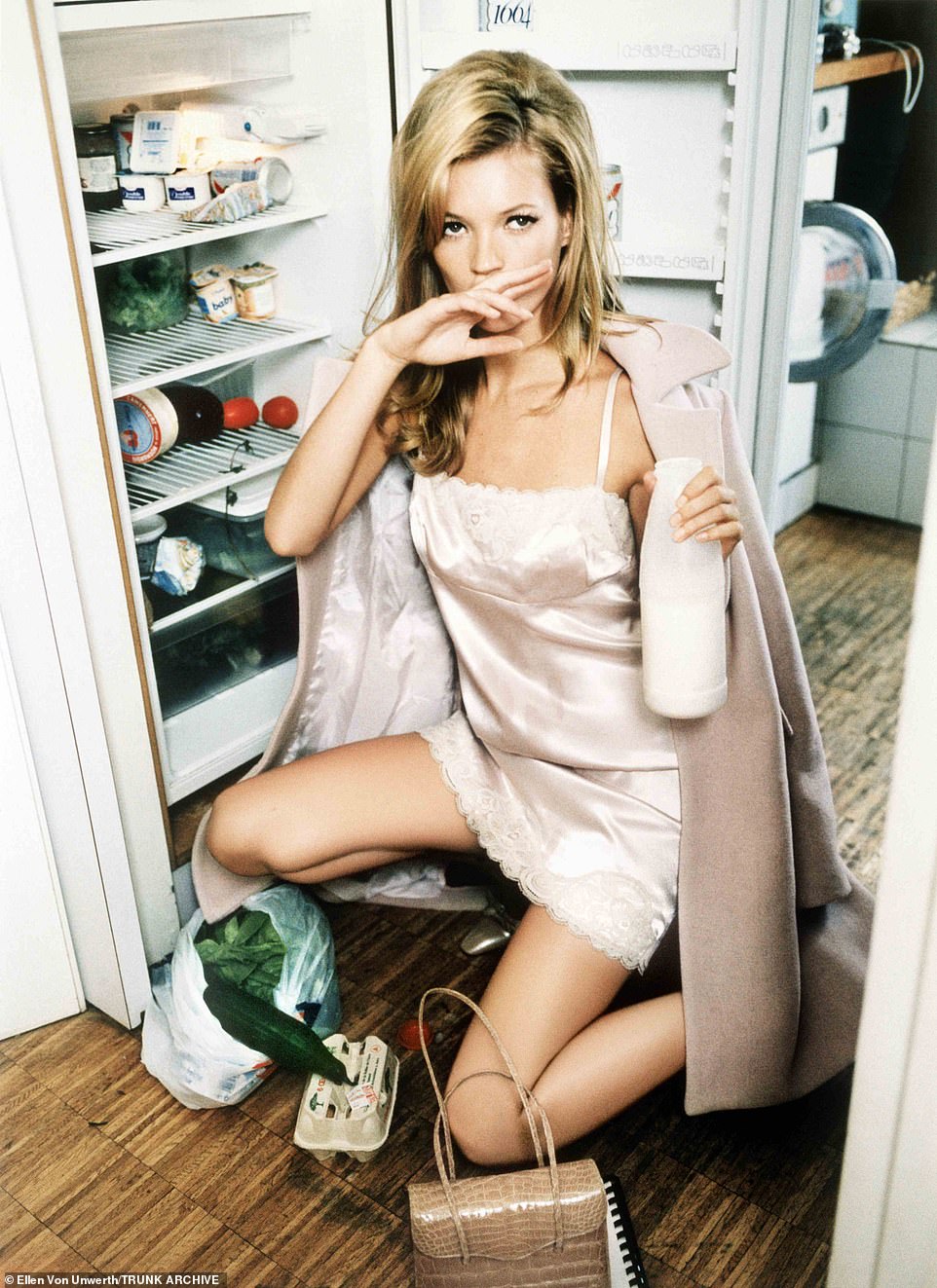 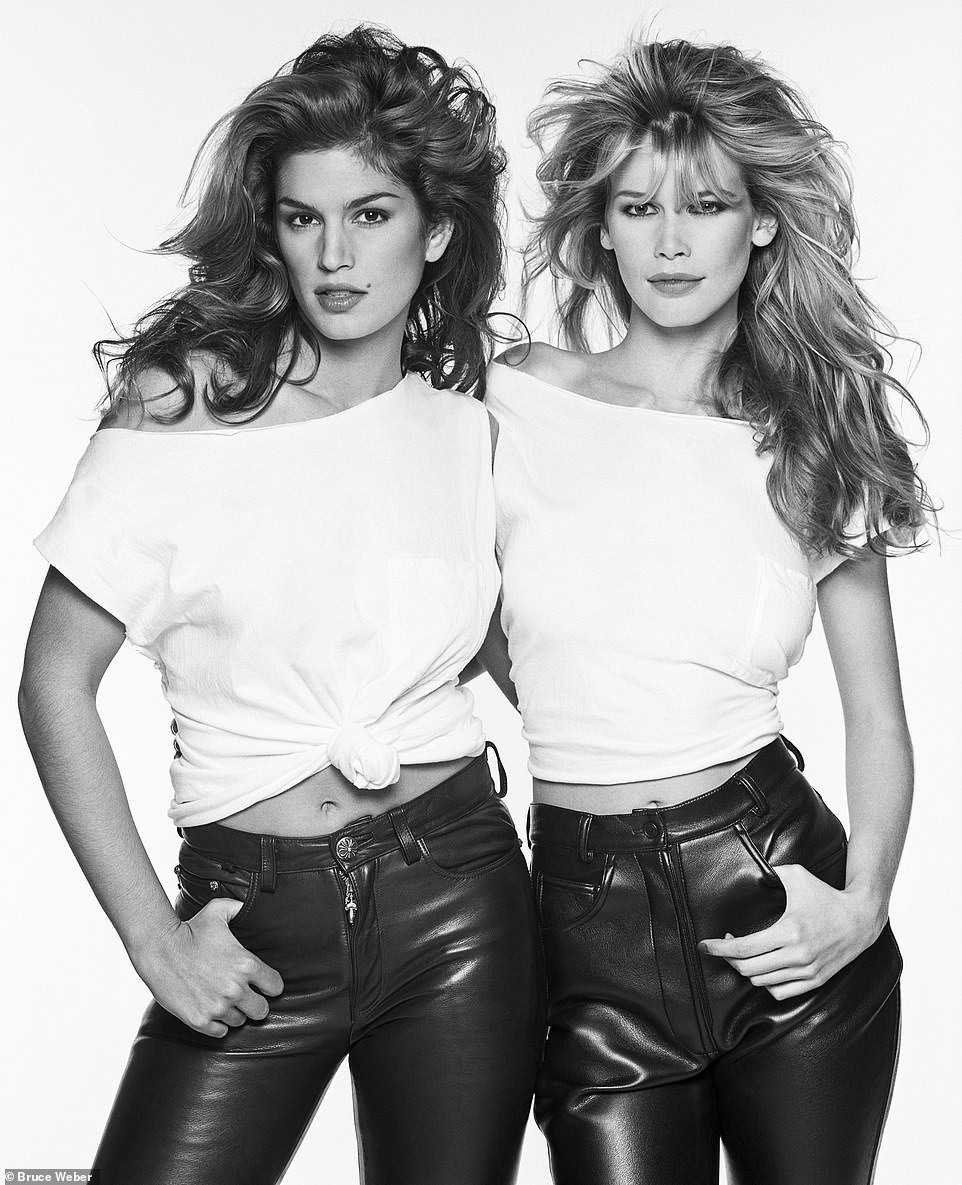 Claudia posed with Cindy Crawford for this Revlon campaign image in 1992, with Bruce Weber shooting. ‘Bruce Weber seized on the idea of supermodel sisterhood, framing Cindy Crawford and myself with tousled hair wearing leather jeans and white T-shirts in this campaign image for Revlon, one of the most successful cosmetic brands in the world at the time,’ Claudia told Elle 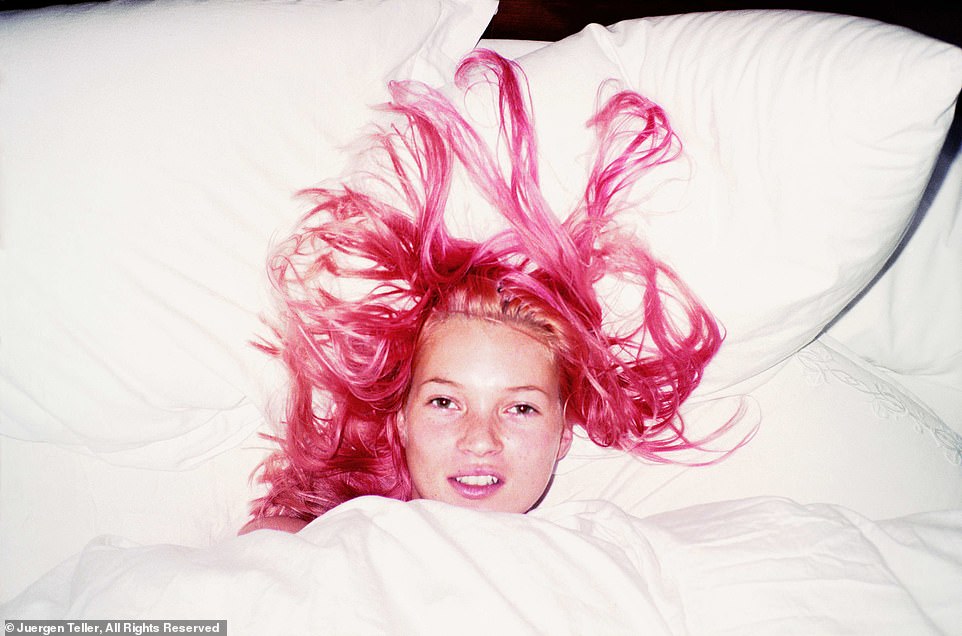 This image of Kate Moss, snapped by Juergen Teller in London in 1998, was part of a personal project shot at her house. Claudia explained to Dazed: ‘Kate had dyed her hair for a Versace show and, going back to blonde, it faded gradually through different shades, from red to orange, with Teller photographing each transformation on successive days’

After von Unwerth shot her for Guess in 1989, Claudia became the face of a Guess perfume and toured the US to promote it in 1990 at her star grew.

‘I remember flying around the US to every major city for signings in department stores,’ she told the New York Post.

‘I returned to my apartment in New York near Central Park, and one morning, sleepy-eyed with bed-head hair, I was in the elevator when a person entered and asked, “Are you the Guess girl?” I knew then my life had changed forever.’

She was quickly booking extremely high-profile gigs, including a cover of Vogue UK when she was just 18. Soon after that, she met Chanel designer Karl Lagerfeld, who asked to meet her in Paris.

‘Within hours I was being fitted for his new collection. We spoke in German and no one around us could understand, which he loved. There was an immediate sense of complicity, and I loved his sharp humor,’ she recalled. 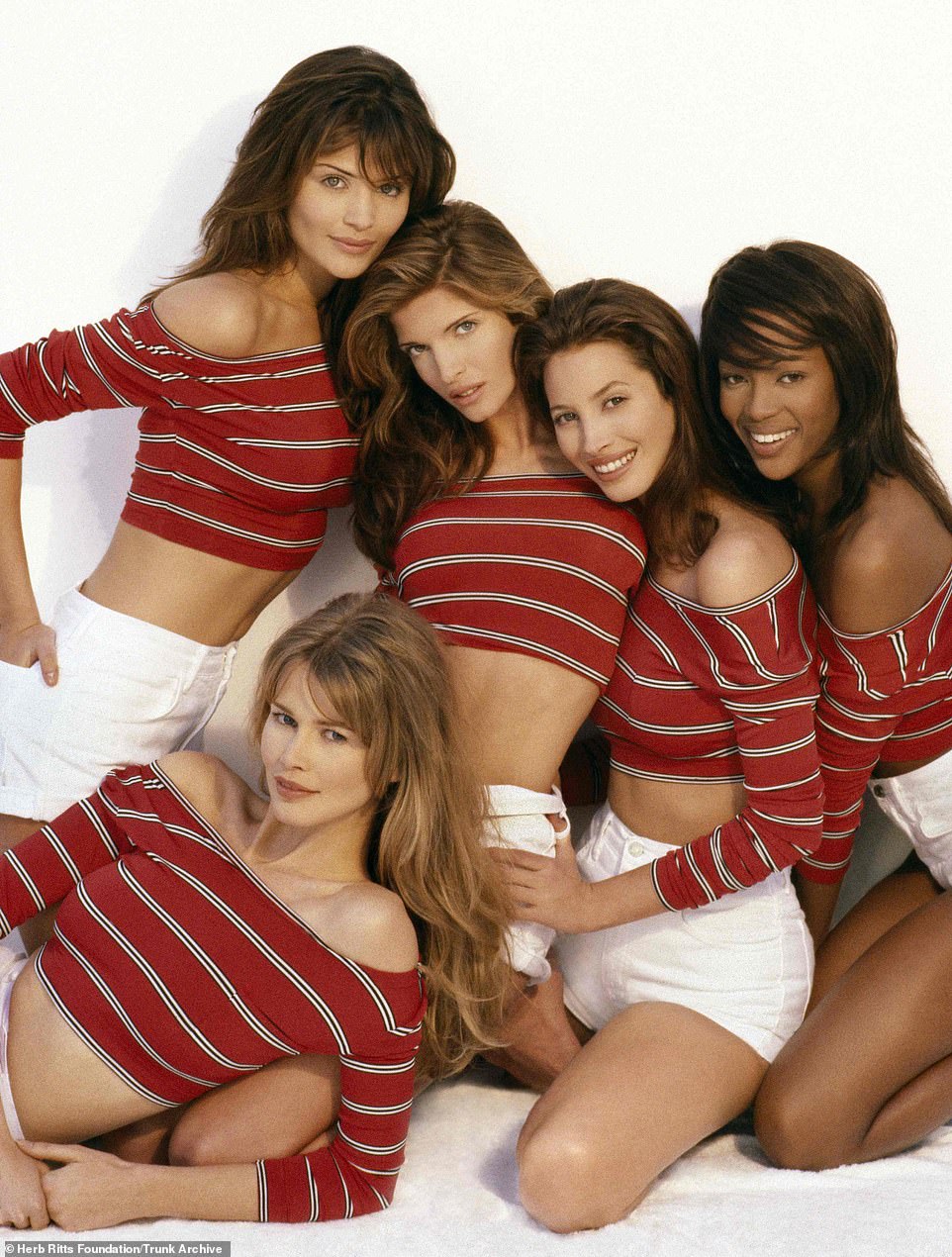 Another ‘quintessential 1990s’ shot is this one for a US Vogue cover shot by Herb Rits featuring (clockwise from top left) Helena Christensen, Stephanie Seymour, Christy Turlington, Naomi Campbell and Claudia, who said: ‘I recall Helena and I discussing different types of licorice on the set. Denmark [where Helena is from] makes the best and fresh, and I remember asking her to bring some for me next time she went home’ 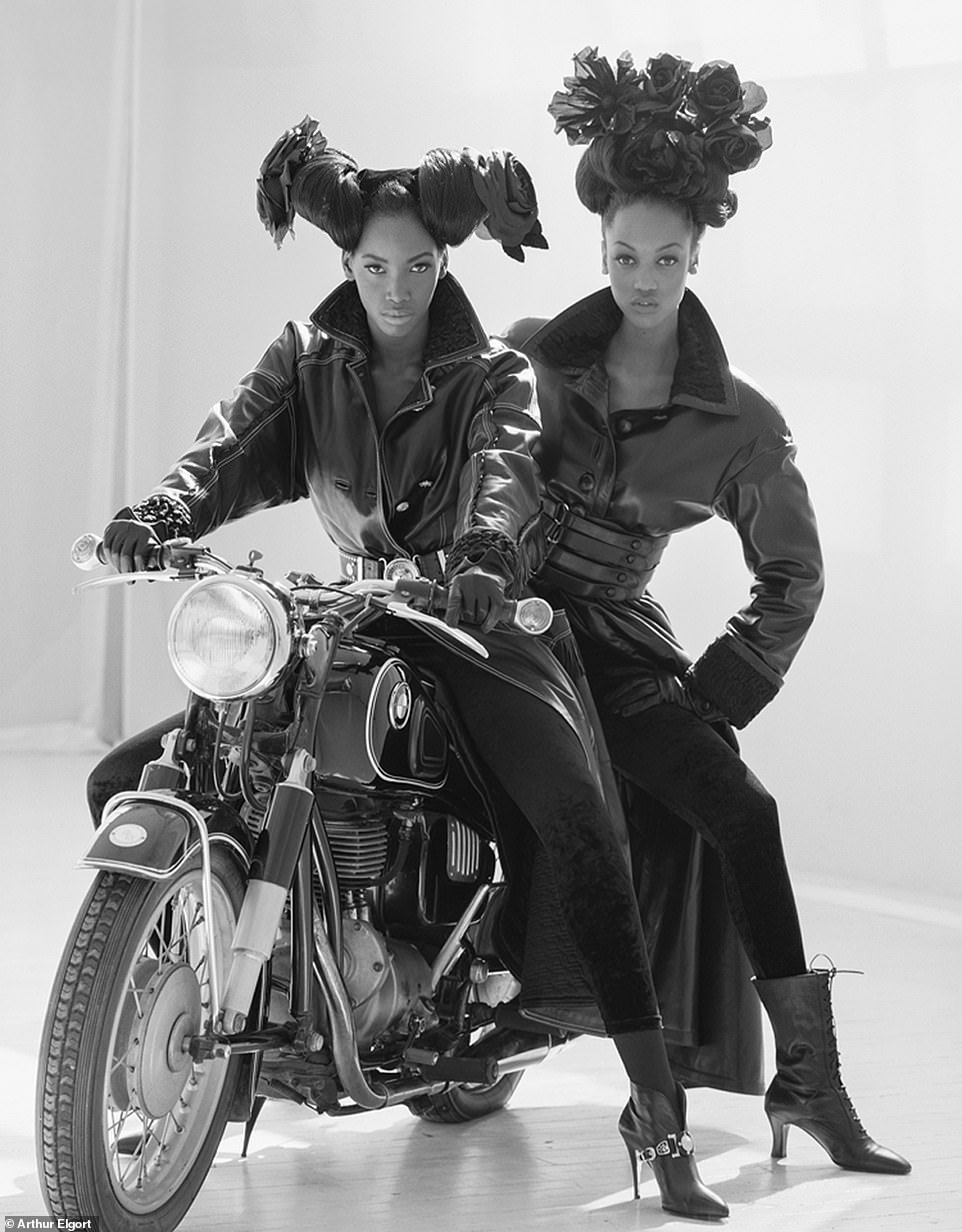 Claudia said of this shot that photographer Arthur Elgort ‘is famed for imbuing his images with a sense of humor and vitality. This shot of Tyra Banks and Beverly Peele, as tough glamour bikers, was for British Vogue in 1993’ 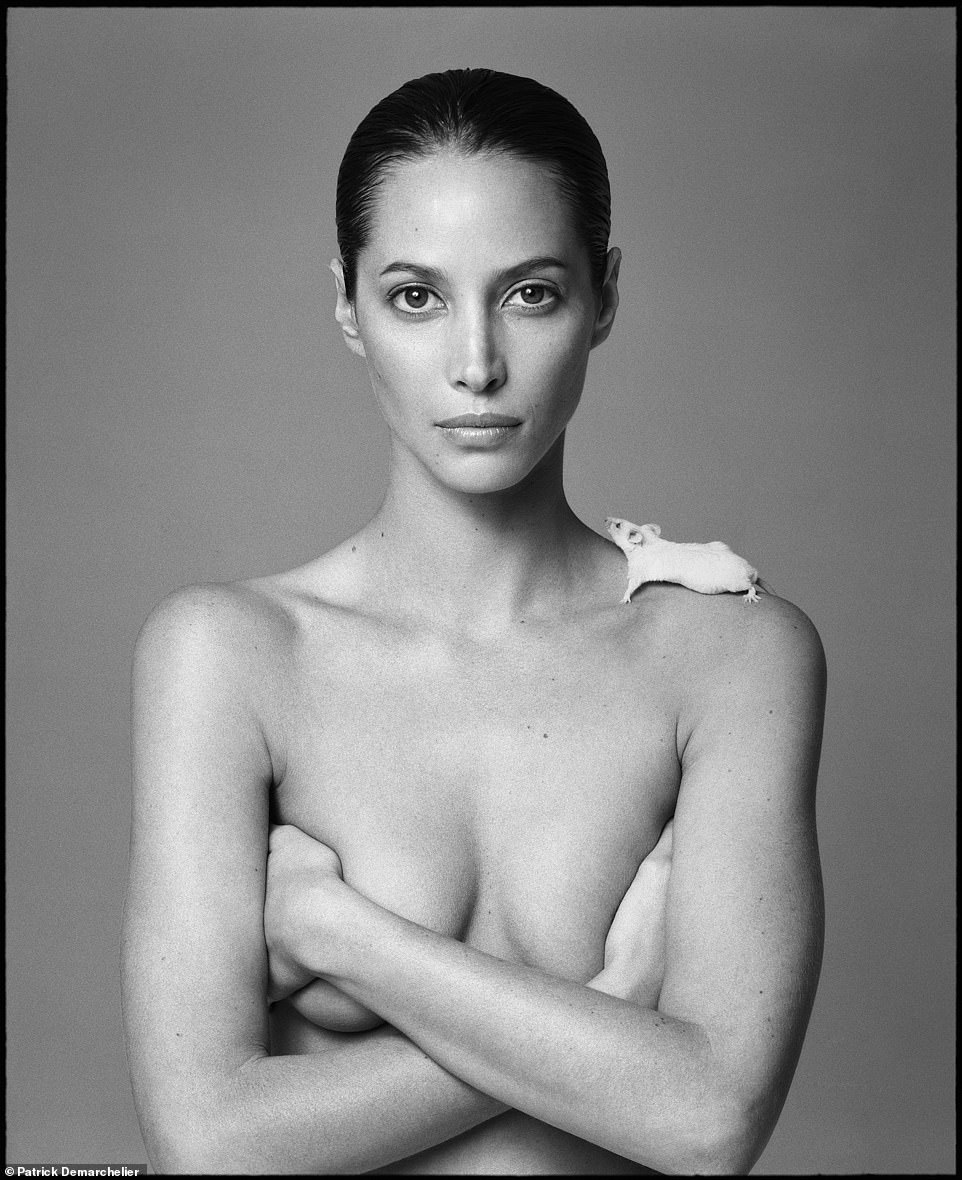 Patrick Demarchelier captured this shot of Christy Turlington for Harper’s Bazaar in 1999. She had covered the magazine seven times by that point

‘As supermodels, we also became symbols of a self-made success, in an era that championed female ambition and that was also fueled by sex, power, and glamour,’ she told CR Fashion Book.

‘We lived so many moments together and for Versace we were part of one big family. The epoch and the simple fact of time helped forge bonds. Before the 90s, a model’s career would rarely last past her 30s and there was a constant turnover of faces. With the supermodels, careers started to last longer as we became powerful brands in our own right.

‘Prior to the 90s, models were largely nameless and categorized as “runway,” “commercial,” or “editorial.” As “supers” we were seen as individuals and traversed those boundaries. We walked the runway, featured in campaigns and on the covers of magazines, but we were also invited onto talk shows, to appear in films and on TV.

‘I remember so well appearing on Late Night with Letterman aged 22 in a scarlet Chanel jacket — such a fun time. Today, the idea that a personality or individual can transcend the brands they work with is accepted, but back then it was very new,’ she said.

Claudia has watched the industry change over the years, and says it’s ‘grown beyond my wildest imagination,’ citing a faster pace and more brands to choose from. 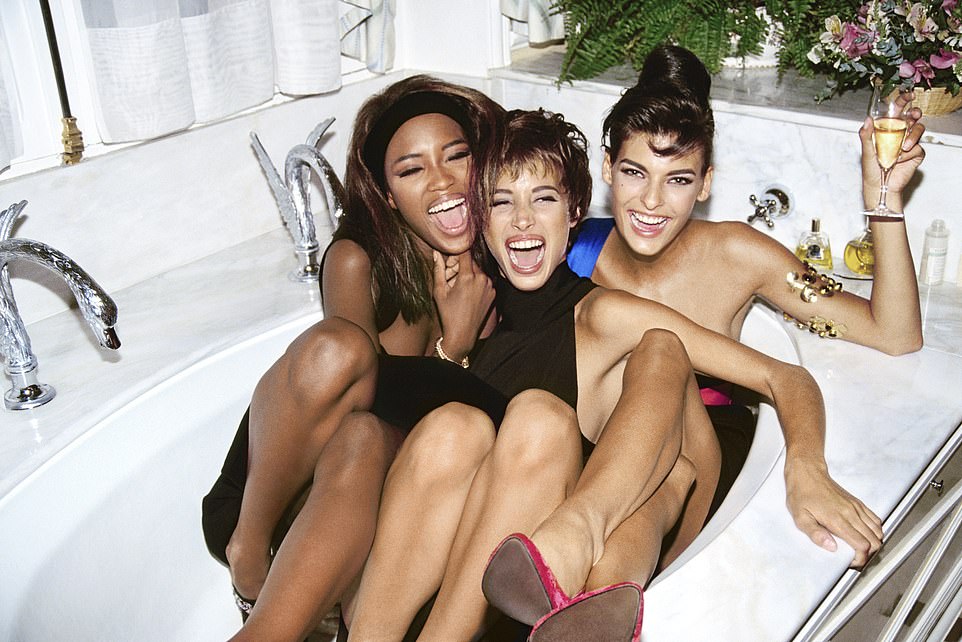 Naomi Campbell, Christy Turlington, and Linda Evangelista, are pictured posing for Roxanne Lowit after a Versace show in 1990. Naomi previously told the Guardian: ‘We were in Donatella’s suite at the Ritz and were planning to go out. We started joking around in the bathtub and Roxanne was there to capture it’ 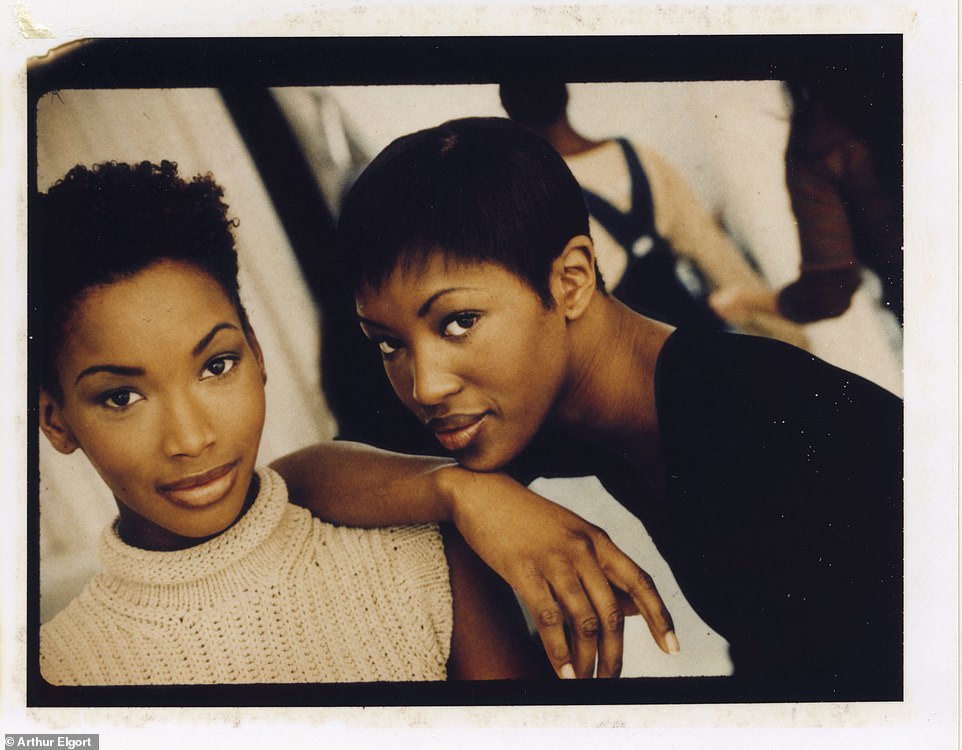 There has also, of course, been the advent of social media, which she said is ‘a superb way to manage your own exposure.’

But, she admitted to Harper’s Bazaar, ‘the flip side of the big exposure is perhaps the pressure to share everything with everybody. In the 1990s, you could still have a private life.’

Social media has also meant doors have opened to a more diverse range of models, which Claudia praises.

‘There’s so much talent today that is diverse in race, age, and, increasingly, size. Individuality and personal style and expression are being championed like never before,’ he said, ‘It’s so healthy to see such diversity in faces and styles.’

The diversity is even good for her and the supermodels she came up with — who, thanks to changing ideas about age, are still working into their 50s.

‘There is no ‘aging’ out — look at Naomi Campbell; Kate Moss; Amber Valletta; or Cindy Crawford and her daughter, Kaia [Gerber]; Georgina Grenville; Carolyn Murphy; and myself — we all continue to work,’ she told said. 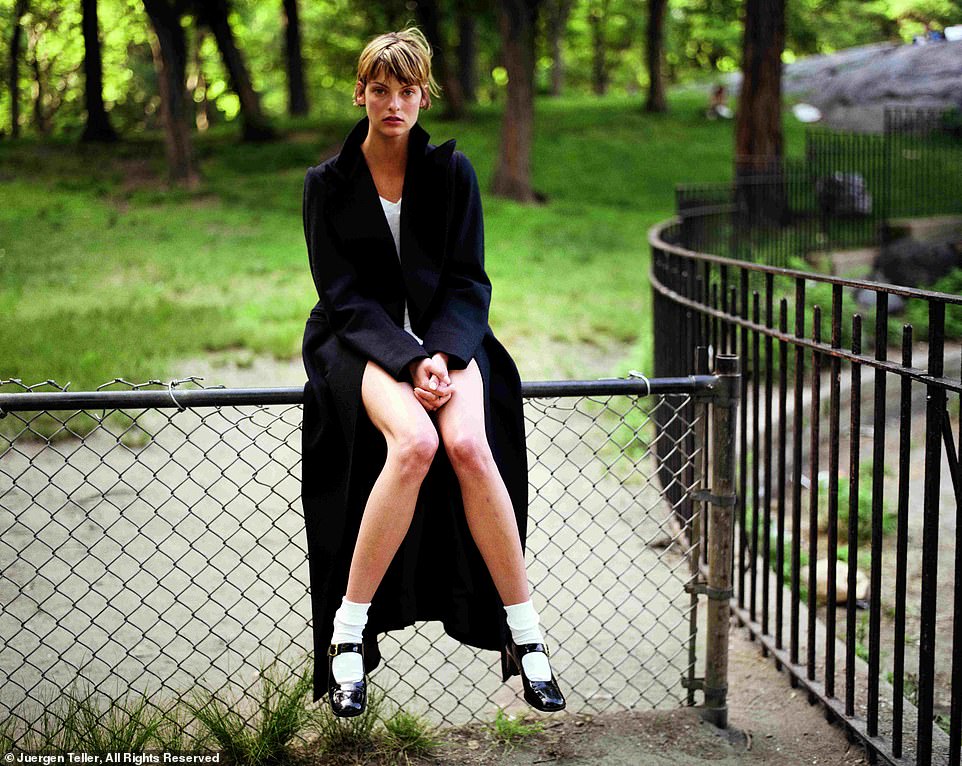 Pictured is Linda Evangelista posing in New York’s Central Par in 1993 for Juergen Teller, who was shooting her for Interview magazine 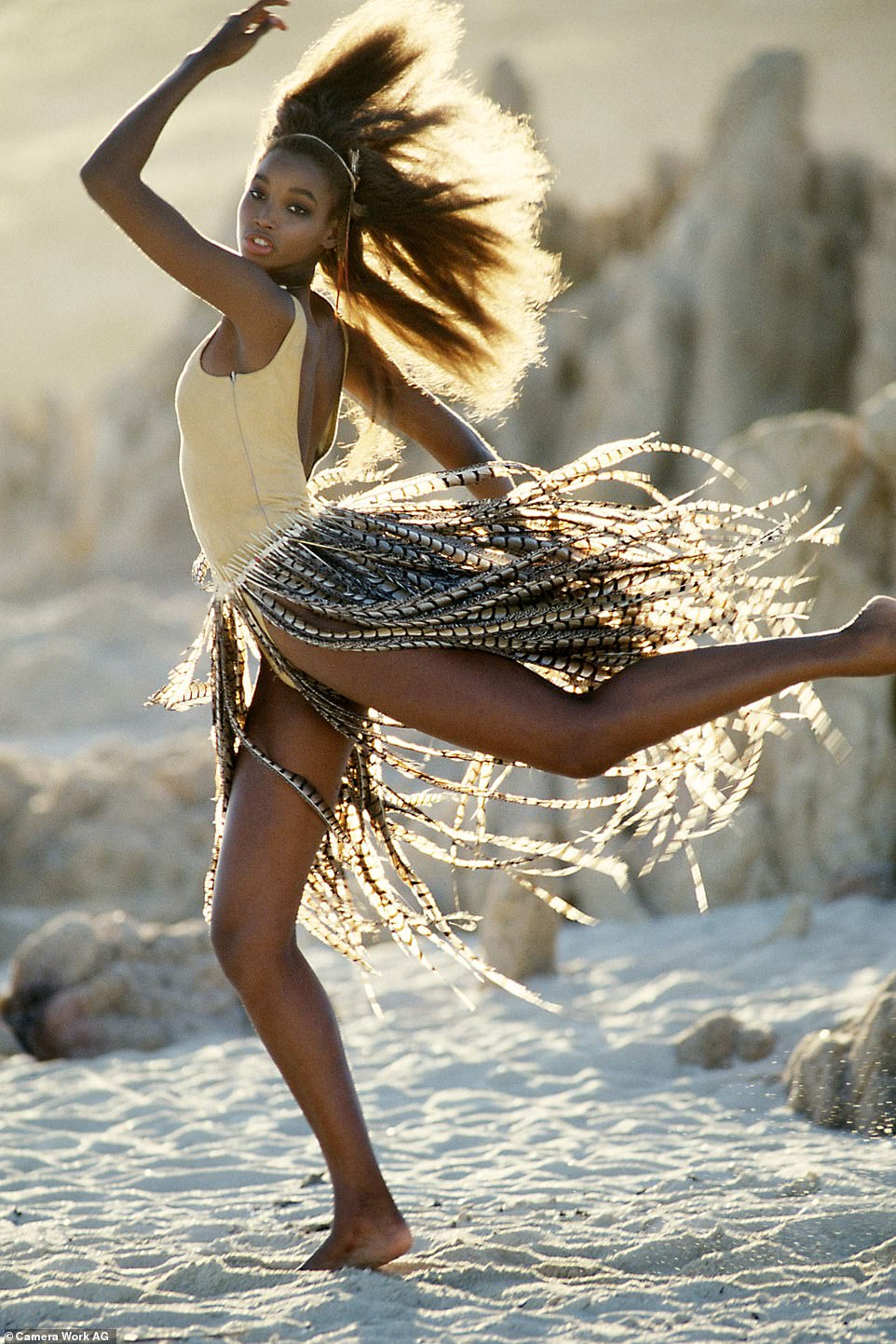 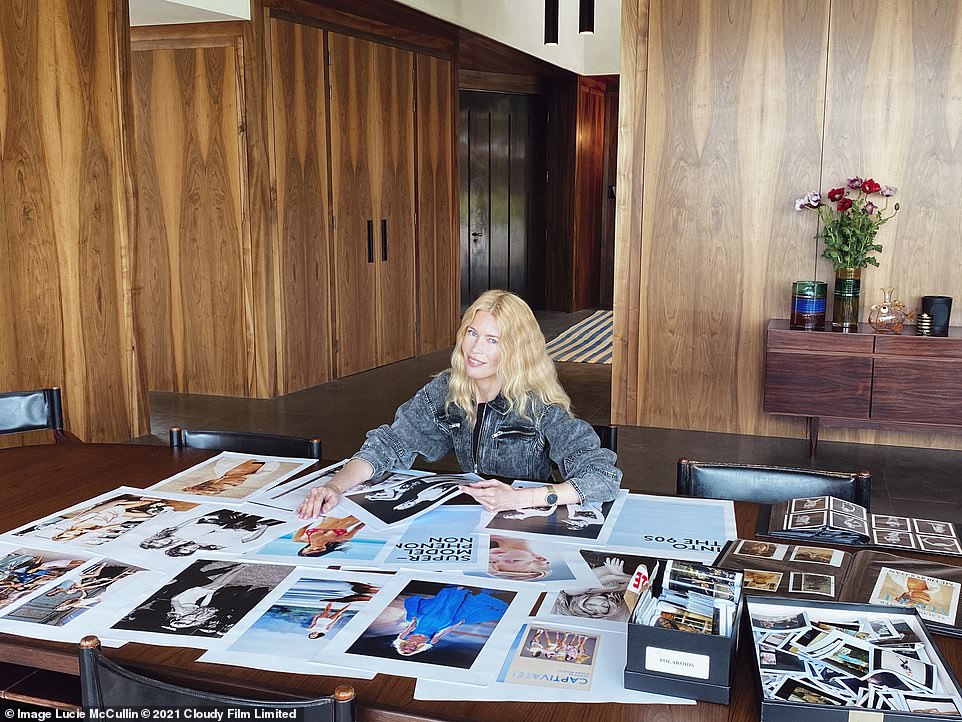 Claudia focused on earlier years for her new project. She said she went through images, figuring out which ones still resonated today — and landed on 150 images from thousands. ‘What made it? What didn’t? I always asked myself is this quintessentially 90s?’ she said 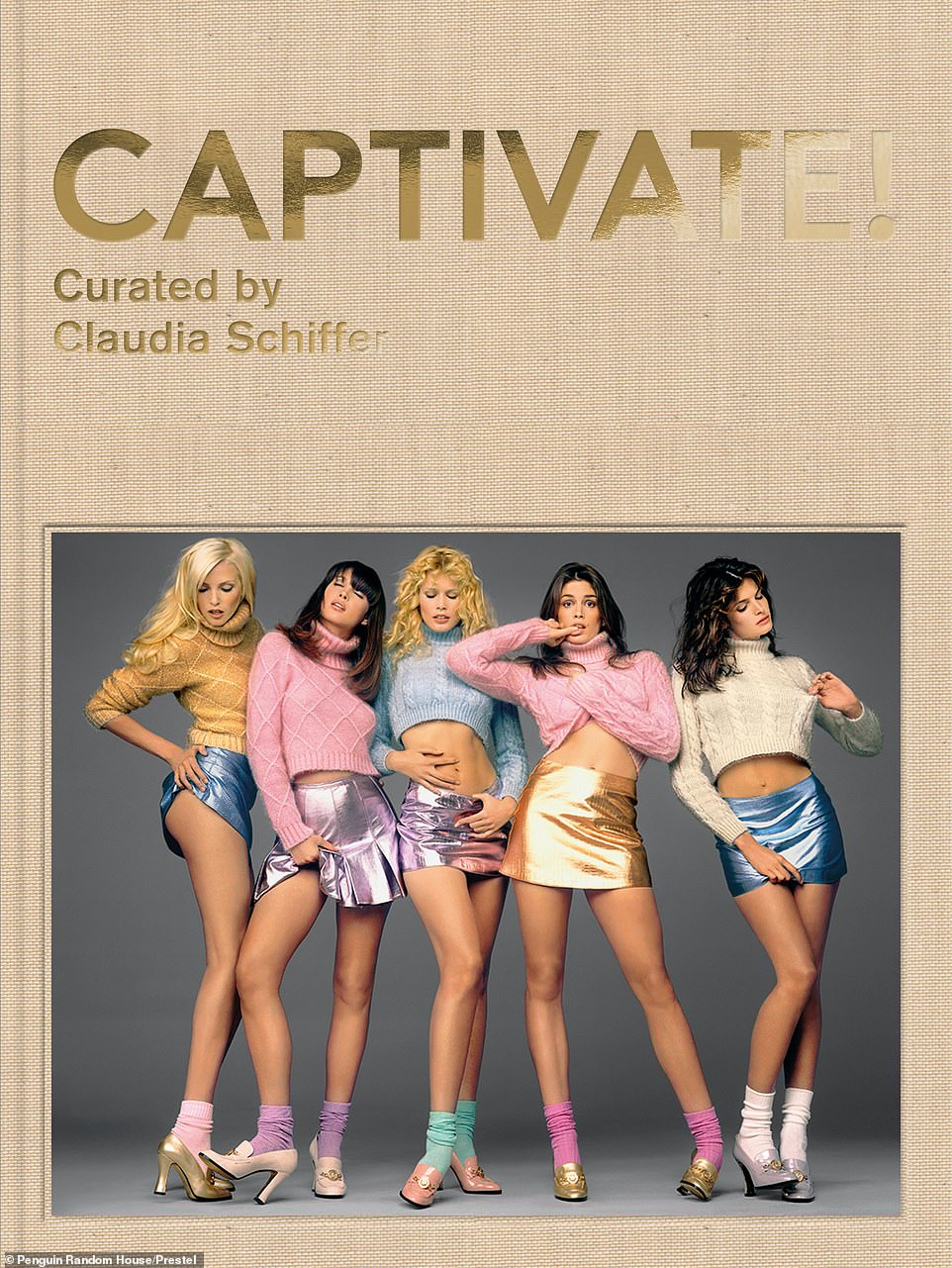 Her new coffee table book, Captivate, will be published in the US on November 30. A corresponding photo exhibition at the Kunstpalast Art Museum in Düsseldorf, Germany, is on display until September 2022

But while Naomi is still regularly walking the runway and Cindy covered Vogue with Kaia in 2016, Claudia focused on earlier years for her new project. She said she went through images, figuring out which ones still resonated today — and landed on 150 images from thousands.

‘What made it? What didn’t? I always asked myself is this quintessentially 90s? And does the image truly represent the individual photographer’s eye?’ she said to CR Fashion Book.

‘I also wanted to celebrate the teams of photographers, models, stylists, hair and makeup artists, and art directors that collaborated to make fashion happen. Where the 1980s was defined by perfectionist high glamour, the 90s was about energy, reality, and personality and the show also captures that big shift.’

She told Vogue that it’s incredible to see young people embracing the style of the decade.

‘I see a new generation, including my daughters, discovering the 1990s — wearing slip dresses, vintage Levi’s and T-shirts, and drawing inspiration from the era’s extraordinary creativity. It seemed then that anything was possible, and I believe it still is,’ she said.