The mother and step-father of missing four-year-old Cleo Smith are experiencing ‘genuine sadness’ as they struggle to keep it together, body language experts  revealed.

Cleo Smith mysteriously vanished from her tent near the Blowholes campsite north of Carnarvon, Western Australia between 1.30am and 6am on Saturday morning.

As police focus on a ‘worst case scenario’ where the little girl may have been abducted as she would have been unable to open the tent zip alone, all eyes were on Ellie Smith and her partner Jake Gliddon as they fronted media for the first time on Tuesday.

Ms Smith appeared emotional during the press conference while Mr Gliddon seemed lost for words as the couple recounted the last time they saw young Cleo.

Scroll down to watch the interview 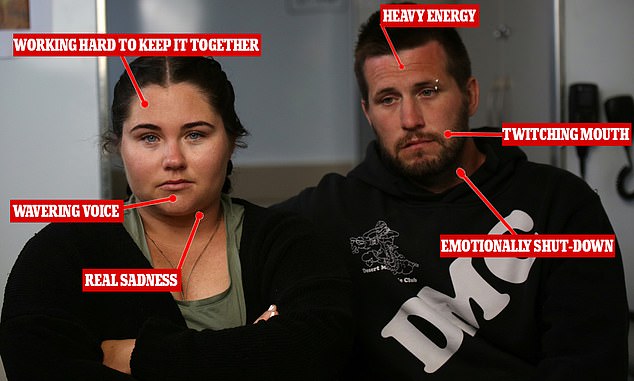 Body language experts have weighed in on the interview analysing the gestures, tone of voice and facial expressions of the couple 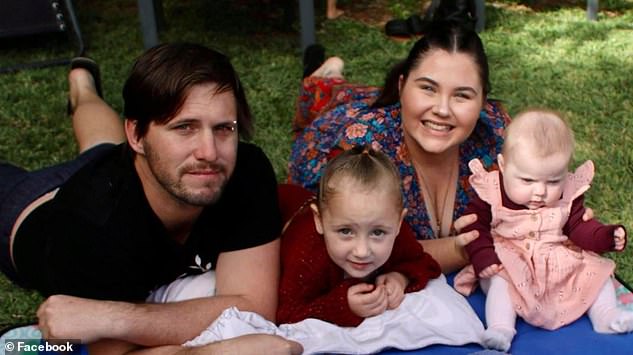 ‘In the cases similar to this that I’ve worked on I’ve seen much more emotion from both parents. I think she’s working hard to keep it together,’ Body Language expert Traci Brown told Daily Mail Australia.

‘I heard her voice waiver a bit and that’s the only way I could tell real sadness is there. I think his stress response is to shut down so that’s what we’re seeing.’

She added the couple appeared to be ‘wired differently’ in terms of emotional responses, pointing out Mr Gliddon gave off a ‘heavy energy’ despite appearing stiff and less reactive.

Both had their arms crossed, which was a sign the pair were facing ‘stress triggers’ as the pair exhibited ‘self-comforting behaviour’ during the interview. 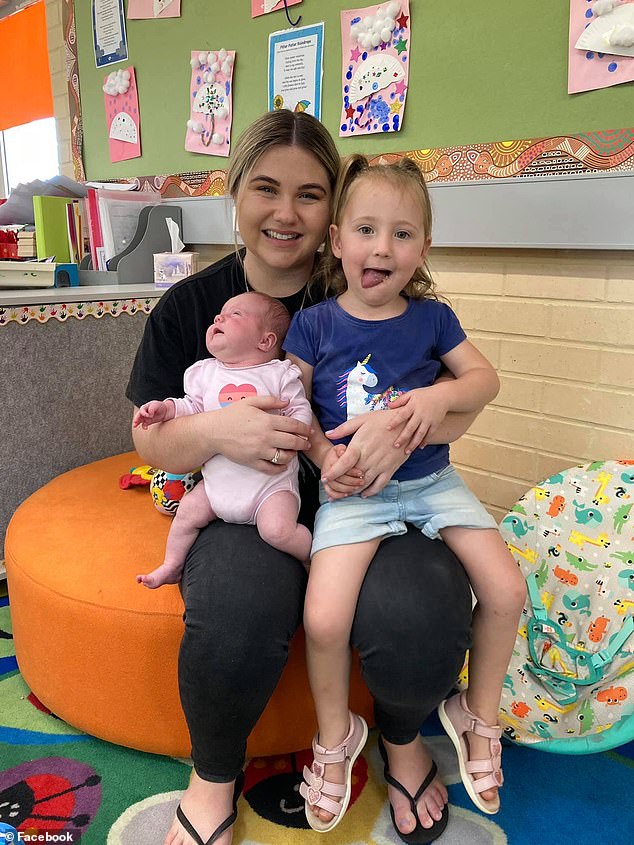 Body language expert David Stephens from Critical Insights told Daily Mail Australia  that when someone crosses their arms it can be a way of pacifying or self-comforting in stressful situations.

‘The question we always need to ask of course, is why are they seeking comfort – what is it that has them worried?,’ he explained.

He added the gesture, tone of voice and facial expressions seen during the interview indicated truth-telling while mirroring the couple’s sadness and distress. 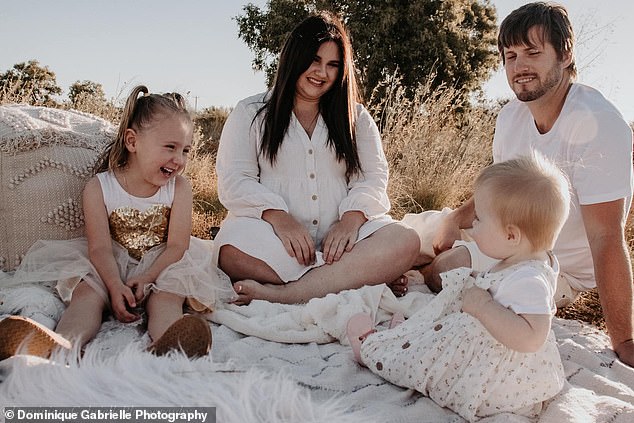 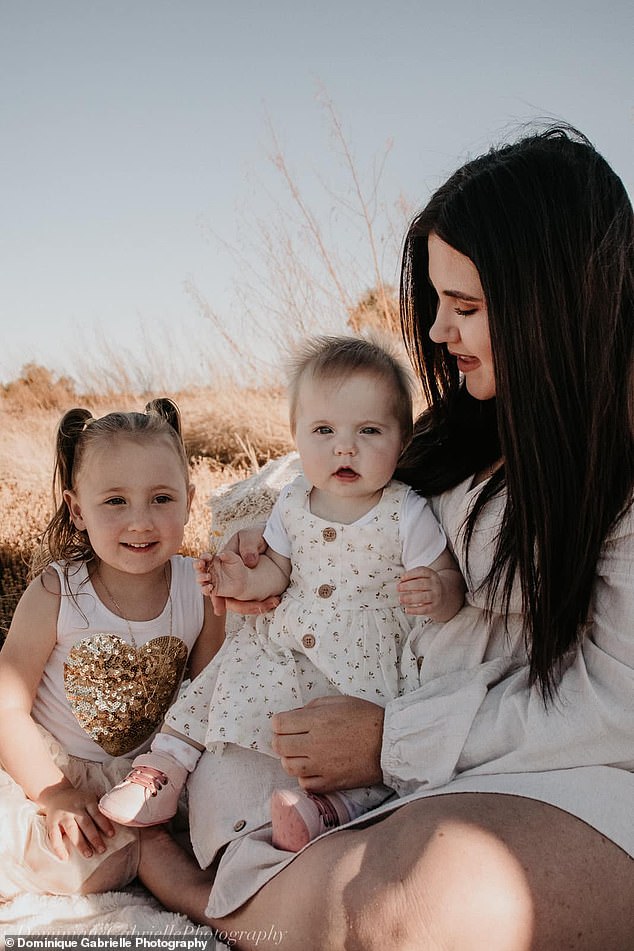 Ms Smith’s voice faltered as she relayed the moment she unzipped the tent to discover her four-year-old was missing from her red and grey sleeping bag.

‘Her gestures and illustrators, of which there are several, broadly match what she is saying, which is a good indication that she is being truthful,’ he said.

‘The pitch of her voice, her tone and facial expressions generally match what she is saying verbally, which indicates distress and sadness.’

While Ms Smith fought back tears her partner, Jake Gliddon, sat quietly by her side.

His twitching mouth and the licking of his lips was a sign he was preparing to talk but hesitated during the moment, Traci Brown pointed out.

‘His hesitancy to speak comes down to the fact he is not Cleo’s biological father,’ Ms Brown said.

‘He’s unsure of how to respond to the situation.’ 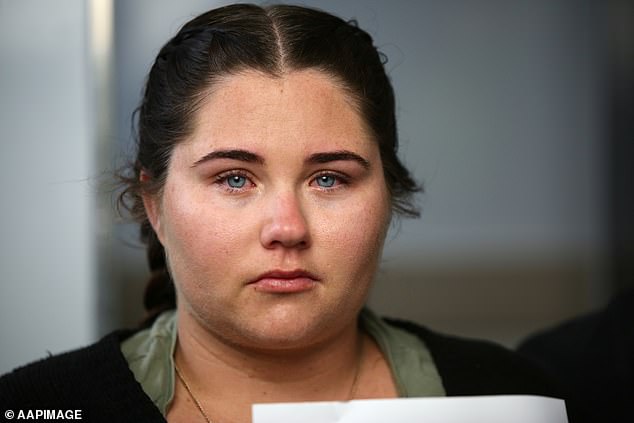 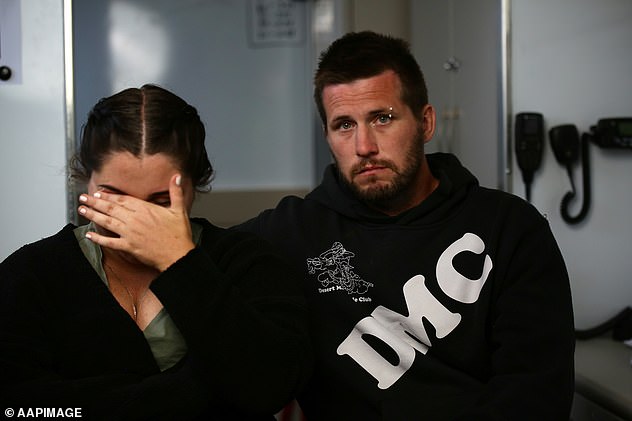 Mr Stephens agreed noting that while Mr Gliddon showed genuine sadness Ms Smith was clearly the speaker of the couple.

‘He wants to say something but is not given the chance or is simply unable to verbalise it,’ he said.

‘The media obviously like to focus on the mother, so you don’t necessarily get a lot of the partner shots especially when it’s not the biological father in this case.’

It marked the first time the couple have spoken publicly since little Cleo vanished after Ms Smith issued an urgent plea for help to social media over the weekend.

Although investigators have called Cleo’s disappearance ‘a mystery we’re trying to unravel’, there is no suggestion that Ms Smith or Mr Gliddon were in any way involved. Police have declared the entire area a potential crime scene. 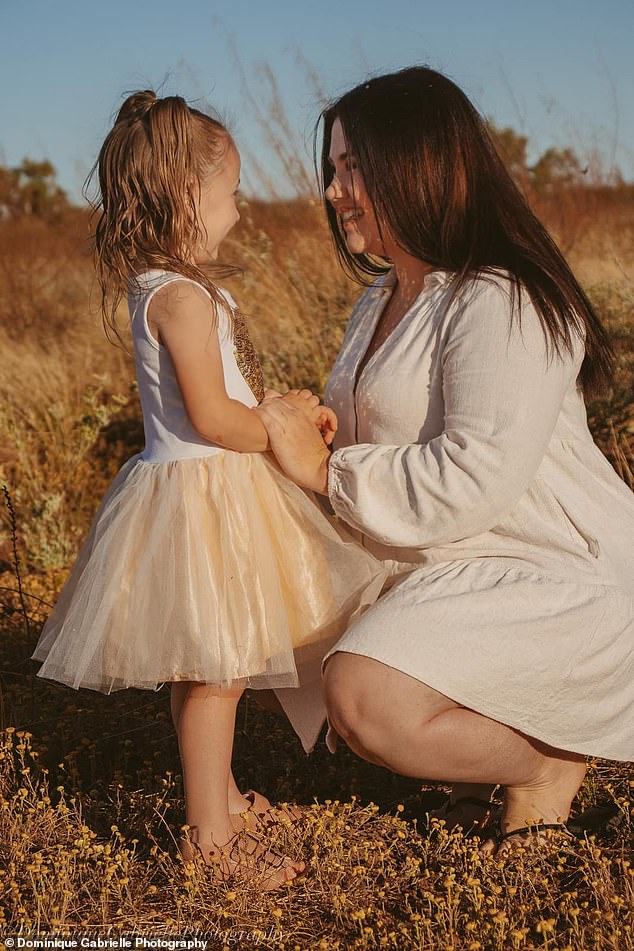 Mr Stephens said the couple don’t appear to be hiding anything sinister from their body language and believes they’re suffering from ‘genuine sadness’.

‘Families who are faking it will often try to fake sadness so crocodile tears – and their facial expressions won’t match the emotions they are trying to pull off.

‘If someone is making it up their illustrators or gestures don’t match up with what they’re saying – they’ll say one thing where ‘this is what happened’ but they’ll be shaking their head or shrugging at the same time,’ he continued.

‘[Ms Smith] does a lot of head shaking but it’s part of her baseline – what she’s done throughout the interview – so it’s consistent and relating to her trying to come to terms with the situation.’ 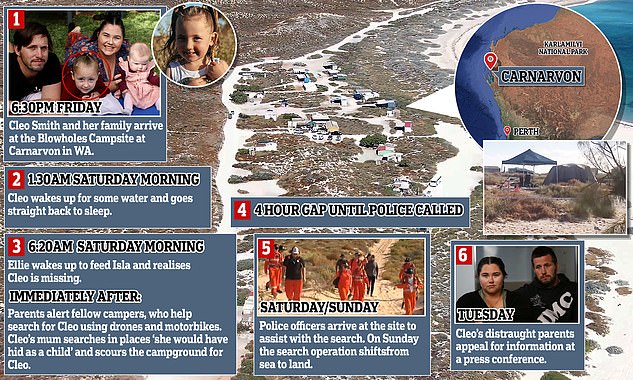 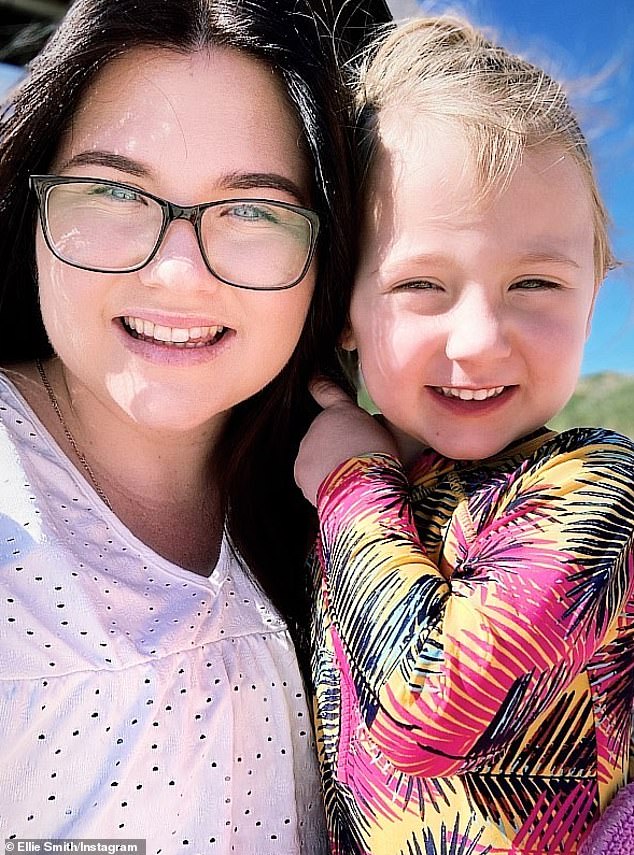 Meanwhile, police have received information from people ‘from around the world’ adding police are treating the little girl’s disappearance as a ‘search and rescue mission’ 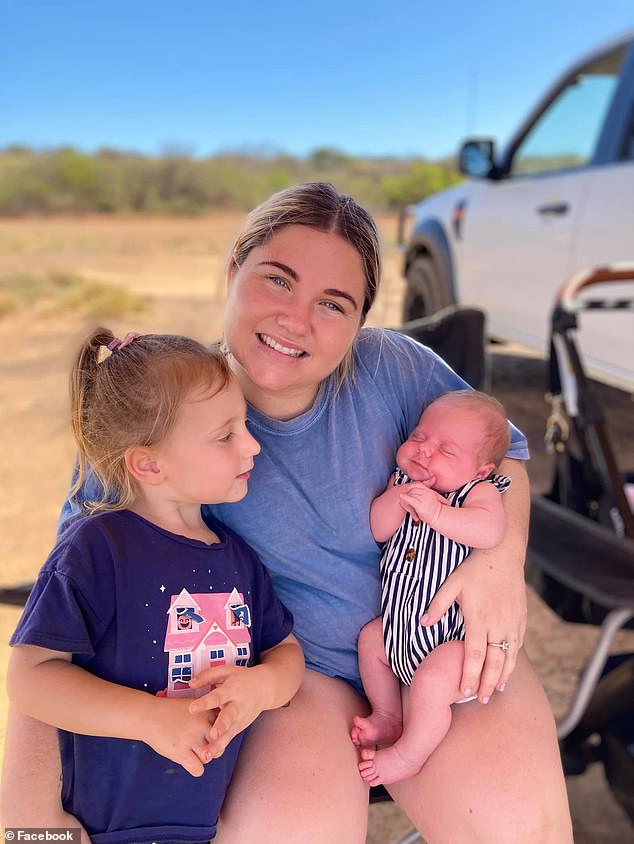 Ellie Smith is seen with Cleo (left) and her baby sister Isla. The mother said when she woke in the morning the tent zipper was nearly completely open

It comes as a disturbing new clue in the disappearance pointed to the ‘worst case scenario’ the little girl was snatched from her tent as her family lay sleeping.

Police have revealed little Cleo was too small in stature to reach the zipper of the tent, which was found hanging open by her mother at 6am, to open it herself.

WA Police Inspector Jon Munday said the height of the zip opening was a major factor in the possibility Cleo was now in the hands of an unknown third party.

‘The positioning of that zipper for the flap is one of the circumstances which has caused us to have grave concerns for Cleo’s safety,’ he said on Wednesday.

The family tent had several entry points that could be unzipped, with the one found open being at the front-facing area of the tent where the little girl had been sleeping.

The new detail comes after other campers claim they heard the sound of a car speeding off around 3am and police revealed up to 20 sex offenders live near the campsite where Cleo was last seen five days ago.

Police have disclosed that while there are currently no concrete suspects for Cleo’s disappearance, but there are ‘groups they are interested in’.

All you need to know about Cleo’s disappearance

Friday 6.30pm: Cleo and her family arrive at the campsite as the sun begins to set. They quickly set up their tent and get settled in, feeding both of the girls.

Friday 8pm: Cleo went to bed while her younger sister and parents stayed up for a little while longer.

Saturday 1.30am: Cleo woke up asking for a drink of water. Ellie tended to her and checked on Isla, who was in a crib right next to Cleo’s mattress in one room in the tent.

Saturday 6am: Ellie woke up to Isla wanting a bottle. She passed the divider that separated the two rooms in the tent and immediately noticed the zipper was almost entirely open. Cleo was gone.

Sunday: Cleo’s mum issues a desperate plea on Facebook to find her daughter.

Sunday/Monday: Homicide detectives, bush trackers and more volunteers are brought in to assist with the search.

Monday: Police confirm Cleo’s grey and red sleeping bag also disappeared. They are yet to comment on whether there were marks that indicate it was dragged from the tent.

Police reveal they are not ruling out any possibilities relating to Cleo’s disappearance.

Tuesday morning: Search is suspended due to wild weather.

Daily Mail Australia confirms the ‘interaction’ Cleo had with her mother was ‘not sinister’ and simply the four-year-old asking for a sip of water.

Tuesday 1.30pm: Cleo’s mum and stepdad, Jake, speak to the media for the first time since she disappeared, revealing key pieces of evidence, including:

– The tent they were staying in was left almost entirely open. Cleo and Isla were in the room nearest to the entrance, which was unzipped when Ellie woke up at 6am. Isla remained in her crib unharmed, but Cleo was gone

– Cleo is ‘not the sort of child to wander off’ and would have woken her parents if she needed anything, like when she woke hours earlier to ask for a sip of water

Wednesday: Police confirm reports a car was heard ‘screeching off’ from the campsite at about 3am.

Assistant Commissioner Darryl Gaunt revealed there are ‘between 10 and 20’ known sex offenders in the Carnarvon area, but none are suspects into Cleo’s disappearance following inquiries.

‘We don’t have any concerns about that,’ he said on 6PR Mornings.

‘I know part of the investigative strategies have included reaching and making inquiries into their whereabouts and movements, and this point in time we’re very comfortable where we sit with those inquiries.’

Investigators confirm Cleo would be too short to open the tent zip by herself, stoking fears she was abducted