Scott Morrison has joined the outpouring of relief that Cleo Smith has been found alive after 18 days.

The Prime Minister tweeted: ‘What wonderful, relieving news. Cleo Smith has been found and is home safe and sound.

‘Our prayers answered. Thank you to the many police officers involved in finding Cleo and supporting her family.’ 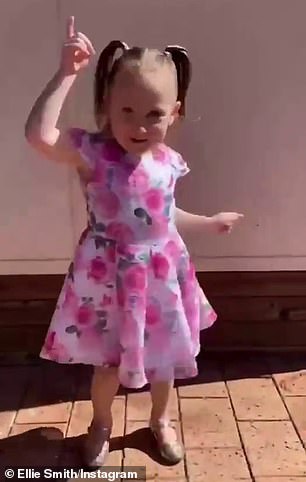 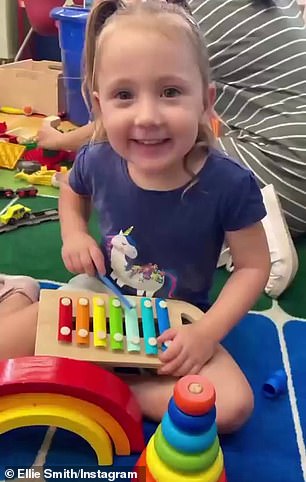 Cleo Smith has been found alive after 18 days. She went missing from her family’s tent on October 16 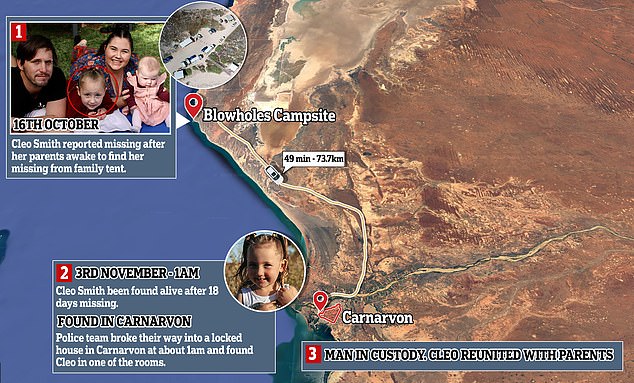 A map shows how Cleo smith was found 73.7km south of the campsite she vanished from more than two weeks ago 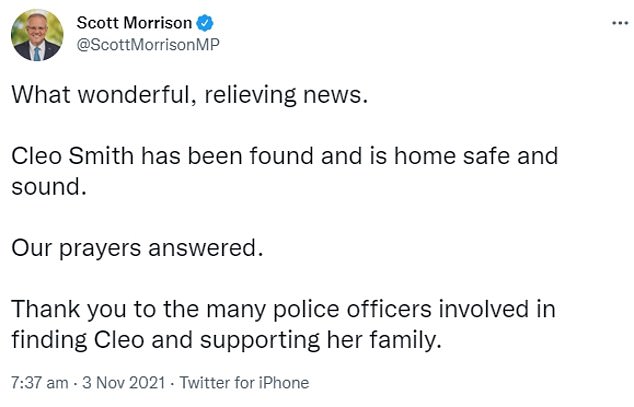 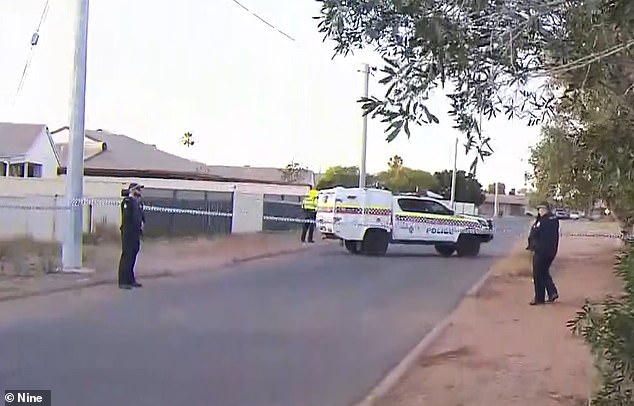 Opposition leader Anthony Albanese also posted a message on his social media and thanked police for their search.

‘Such happy news. Cleo Smith has been found alive and well. To all those who tirelessly searched for this little girl, you deserve our thanks,’ he said.

Labor frontbencher Tanya Plibersek joined the tributes, writing: ‘Cleo Smith is safely back in the arms of her parents. Wonderful news. What this family has been through is every parents’ worst nightmare. To the WA Police, and the community who joined the search, thanks. Welcome home Cleo.’

Meanwhile, Carnarvon Shire President Eddie Smith told Ben Fordham on radio 2GB: ‘For 18 days we’ve been filled with anxiety and concern. I’m a bit emotional at the moment. I might have to do a Bob Hawke and demand we have a day off work today’.

A police team broke into a locked house in Carnarvon, WA – 74km south of the campsite Cleo vanished from – at 1am on Wednesday and found the four-year-old girl in one of the rooms. 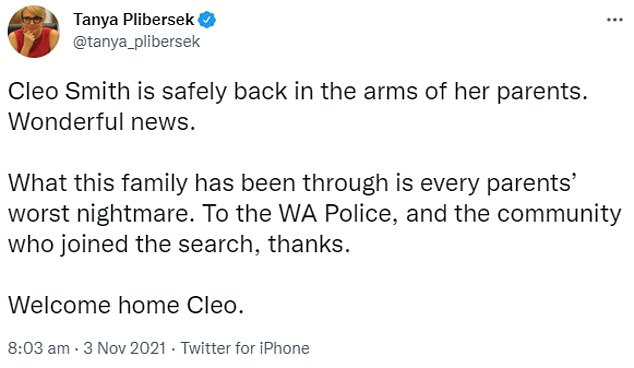 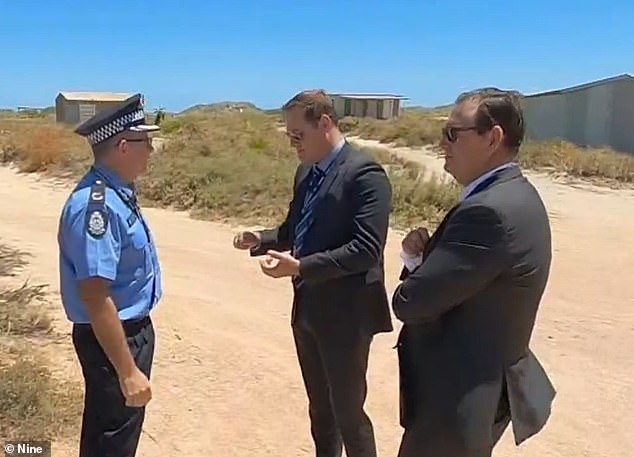 Deputy Commissioner Col Blanch confirmed the great news just before 7am AEST that little Cleo is alive and well.

‘One of the officers picked her up into his arms and asked her ‘what’s your name?’ he said.

Cleo was reunited with her relieved parents a short time later.

A man from Carnarvon was arrested at the home and taken into custody to be questioned by detectives. 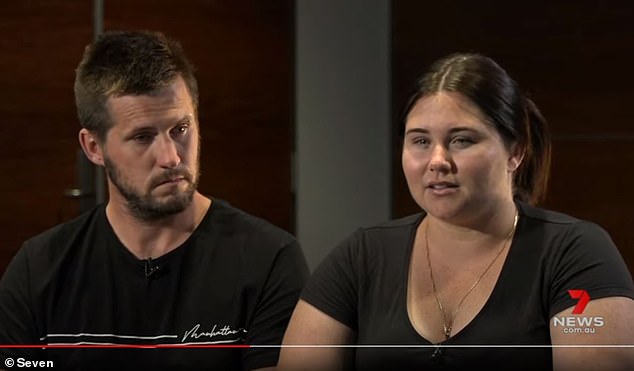 ‘This is the outcome we all hoped and prayed for,’ Deputy Commissioner Blanch said.

‘It’s the outcome we’ve achieved because of some incredible police work.

‘I want to thank Cleo’s parents, the Western Australian community and the many volunteers.

‘And of course, I want to thank my colleagues in the Western Australia Police Force.’

The news has sparked an outpouring of relief worldwide. 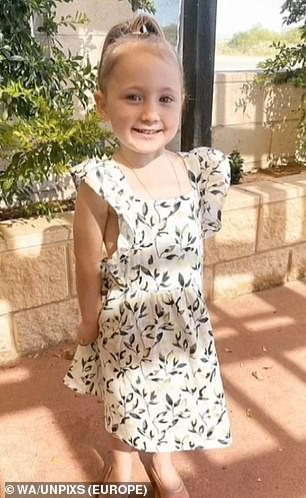 Cleo Smith was found by police on Wednesday morning

Police interviewed more than 110 people who were at the Blowholes campsite on the night Cleo arrived with her family on October 16.

The little girl was last seen in her family’s tent, at the vast campsite on WA’s northwest coast, around 1.30am before her mother and stepfather realised she was missing five hours later.

Detective Superintendent Rod Wilde says the family had stayed near their tent all evening and had not socialised with other campers.

‘I think it’s more than likely an opportunistic-type event,’ he told Perth radio 6PR on Tuesday hours before Cleo was found.

‘We know they got there on the Friday night, it was getting dark, and there would have been limited opportunity for people to observe Cleo at that time.’

Police had stressed the girl’s mother, Ellie Smith, and her partner, Jake Gliddon, were not suspects, nor was Cleo’s biological father.

‘We’ve had over 1000 calls to Crime Stoppers from the public,’ Supt Wilde said.

Police this week collected more than 50 cubic metres of rubbish from roadside bins stretching from Minilya to Geraldton.

It was transported to Perth, where forensic officers and recruits sorted through hundreds of bags in search of items that may help them find Cleo.

The state government offered a $1 million reward for information leading to Cleo’s location.

Police say the girl’s disappearance was immediately treated with the highest priority, although it took two hours to establish a roadblock at the site.

Detectives have made several visits to Cleo’s family home in Carnarvon, sought CCTV footage from a range of businesses in the area and collected samples from a campfire at the Blowholes site. 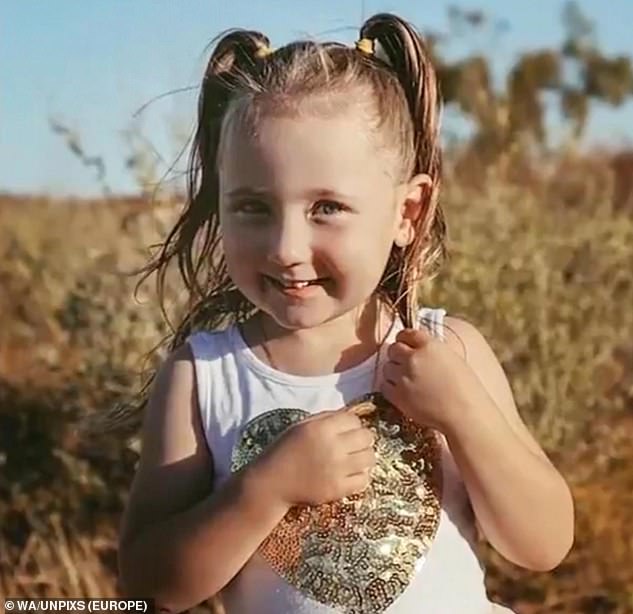 Cleo Smith has been found alive and well, 18 days after she vanished from a tent