The next 24 to 48 hours will determine if tighter COVID-19 restrictions are needed on the Gold Coast after an Uber driver tested positive having been infectious for three days.

The fully-vaccinated man in his 50s is one of two new cases reported on Thursday, with a teenager from the Scenic Rim town of Beaudesert – linked to an existing cluster – also testing positive.

Authorities are concerned about the Gold Coast driver because the source of his infection is a mystery, and the case follows another unlinked infection in the region recorded this week.

Contact tracers are working to find any passengers potentially exposed over the three days he was infectious in the community. 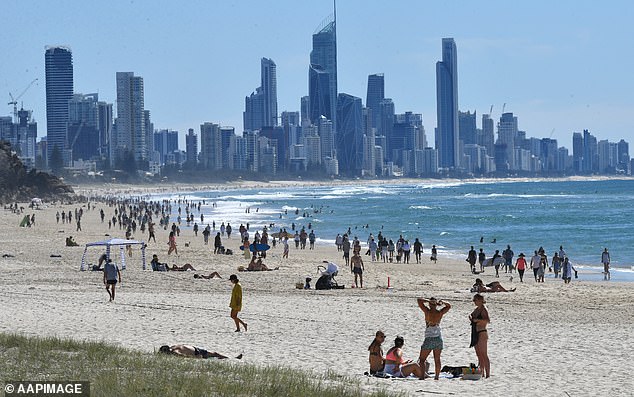 A man claiming to have been a weekend customer said the Gold Coast Uber driver was not wearing a mask during their trip (pictured, Burleigh Heads)

‘If we see more unlinked community transmission on the Gold Coast in the next 24 to 48 hours, we may have to put in place some further restrictions,’ Premier Annastacia Palaszczuk said on Thursday.

There has been concern about the vaccination rate in the region, and Ms Palaszczuk said residents should consider wearing masks where social distancing isn’t possible.

Her advice comes less than a day after the state reached the 80 per cent target for first vaccine doses, and mask restrictions relaxed as a result.

The developing situation differs from previous cases in the southern town of Goondiwindi, where vaccination rates were among the highest in the state.

‘They had very, very high vaccination rates… we don’t have that on the Gold Coast, so I am concerned,’ Ms Palaszczuk said. 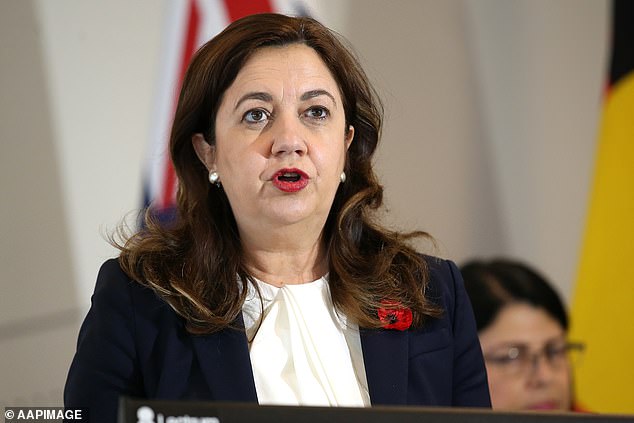 ‘If we see more unlinked community transmission on the Gold Coast in the next 24 to 48 hours, we may have to put in place some further restrictions,’ Premier Annastacia Palaszczuk (pictured said on Thursday

The Gold Coast region is nearly at 80 per cent of first doses for eligible residents, she said.

A man claiming to have been a weekend customer said the Gold Coast Uber driver was not wearing a mask during their trip.

The man said he was notified by Queensland Health on Wednesday that he had been identified as a close contact due to the weekend fare.

‘I noticed he wasn’t wearing a mask – that’s from picking us up to dropping us off,’ the man told 4BC radio.

‘I noticed him coughing a few times as well.’

Uber said in a statement later on Thursday: ‘We have processes in place to temporarily remove an individual’s access to the Uber app if authorities report an infection.

‘We may also limit other individuals’ access to the app if health authorities advise there is a risk. 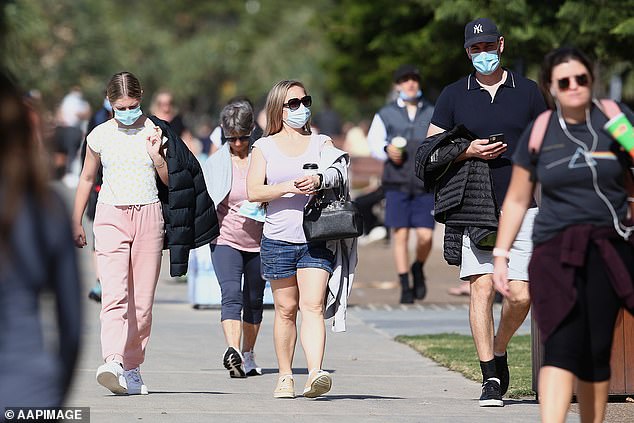 The Gold Coast region is nearly at 80 per cent of first doses for eligible residents (pictured, Surfers Paradise)

‘To help protect the health and safety of everyone, we are advising anyone riding or driving with Uber in Queensland to wear a mask, unless exempt by law.’

Across the state, the first-dose vaccination rate is 80.55 per cent, while 68.84 per cent are fully vaccinated.

The second case reported on Thursday was also infectious for two days in the town of Warwick and less than a day in Beaudesert, and is linked to a cluster in Moree, NSW.

The state recorded one additional case in hotel quarantine.