Telstra to allow its 25,000 staff to work from home after Covid-19 as it is questioned over salaries to senior executives with the CEO on a cool $5M

Telstra is ‘coming out of the shadow of the NBN,’ chairman John Mullen says, as the company reaffirmed a return to growth in 2021/22.

The telco says it has lost more than $6 billion in profit over about the past decade due to the impact of the National Broadband Network and the loss of other revenue sources.

But Mr Mullen told investors at the company’s annual general meeting, held via videolink on Tuesday, that Telstra had reached a turning point.

‘There are few precedents in corporate Australia for an impact or a challenge of this magnitude,’ he said.

‘With the NBN rollout now complete you can finally see the company coming out of the shadow of the NBN.’

On Tuesday, the company also revealed it will let its employees choose to work from home on an ongoing basis.

Its 25,000 workers were some of the first to move to home-based work when the Covid-19 pandemic hit.

Telstra has slashed costs by $2.3 billion and chief executive Andy Penn said the company is on track to reach its target of $2.7 billion. 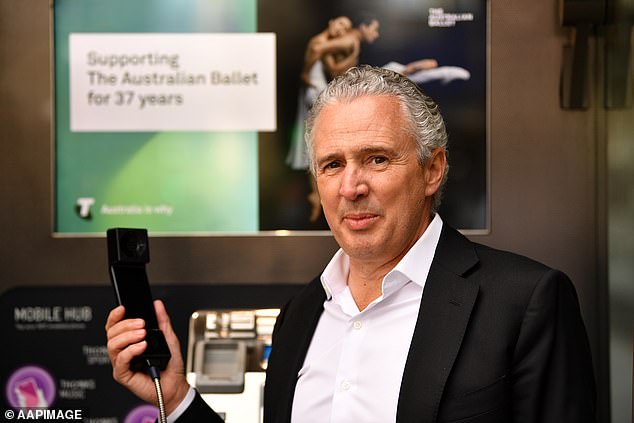 In September, Mr Penn promised earnings per share to reach the high teens between 2021 and 2025 under a new strategy called T25.

He said the company has reduced its number of employees by one third, but further job cuts were off the table, with more savings to come from reduced IT spending.

At Tuesday’s meeting more than 97 per cent of shareholders voted in favour of Mr Penn’s pay package worth about $5 million, but chair John Mullen faced a series of questions from an investor about executive pay.

He defended the CEO’s pay packet, saying the share price of around $3 under Andy Penn’s leadership reflected far more than just his performance.

‘I can assure you that if Andy had not done an outstanding job, the share price would be a hell of a lot worse than it is today,’ Mr Mullen said.

Telstra acknowledged there was still more work to do to upgrade its network coverage.

‘We absolutely recognise and accept that there are still too many failures,’ Mr Mullen said.

The number of customers ringing Telstra’s call centres has fallen by more than two thirds, and Mr Penn said he expects all of those to be answered within Australia, rather than offshore call centres, by June next year.

The company’s total income fell 11.6 per cent to just over $23 billion in 2020/21, while reported earnings before interest, tax and depreciation decreased 14.2 per cent to $7.6 billion.