Parents are still split down the middle on whether 12-year-olds should get Covid vaccines, as Nicola Sturgeon announced Scotland is ‘ready and raring to go with plans to jab children.

Pfizer’s and Moderna‘s jabs have already been approved for 12- to 17-year-olds by the Medicines and Healthcare products Regulatory Agency (MHRA) but the JCVI has yet to formally recommend them for youngsters.

NHS England bosses have already told trusts to be ready to expand the roll out in just two weeks, amid fears the virus will ‘rip through schools’ unless pupils are immunised before the new term.

Whitehall insiders claim Boris Johnson wants the NHS to ‘crack on’ with vaccinating children. The Prime Minister has reportedly become frustrated with the JCVI’s delay in approving plans, which has left little time for children to get vaccinated before returning to classroom.

Some concerned parents have already hit out at the move, claiming even with vaccines there is ‘nothing we can do’ to stop children becoming infected and spread the virus to older people because jabs are not as effective in cutting transmission.

GP Renee Hoenderkamp said despite supporting vaccines for diseases including measles, mumps and rubella, she would not be keen on her own daughter getting jabbed against Covid because of safety concerns surrounding the rare heart condition myocarditis.

But other mothers say the decision on whether to receive a vaccine should rest with children themselves.

It comes as Scotland’s national clinical director said the country will be ‘ready to go’ with a vaccine programme for 12- to 15-year-olds as soon as experts give the go-ahead for them to be jabbed.

Professor Jason Leitch made the commitment as First Minister Ms Sturgeon urged No10’s Joint Committee on Vaccination and Immunisation (JCVI) to make a decision quickly on whether youngsters in the age group should receive the injections. 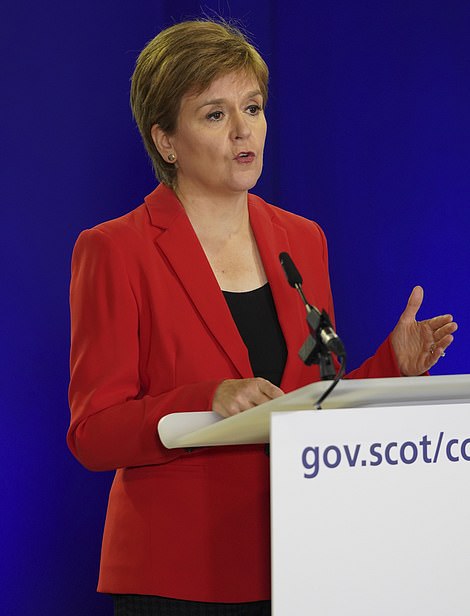 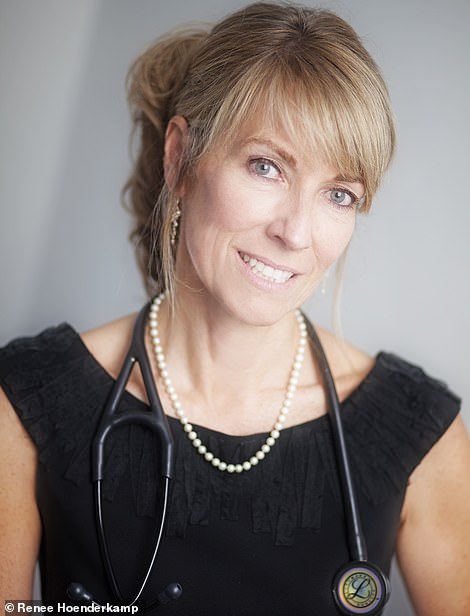 Scotland’s First Minister Nicola Sturgeon (left) announced Scotland is ‘ready and raring to go with plans to vaccinate over-12s against Covid. GP Renee Hoenderkamp (right) said despite supporting vaccines for diseases including measles, mumps and rubella, she would not be keen on her own daughter to have a jab because of safety concerns surrounding the rare heart condition myocarditis 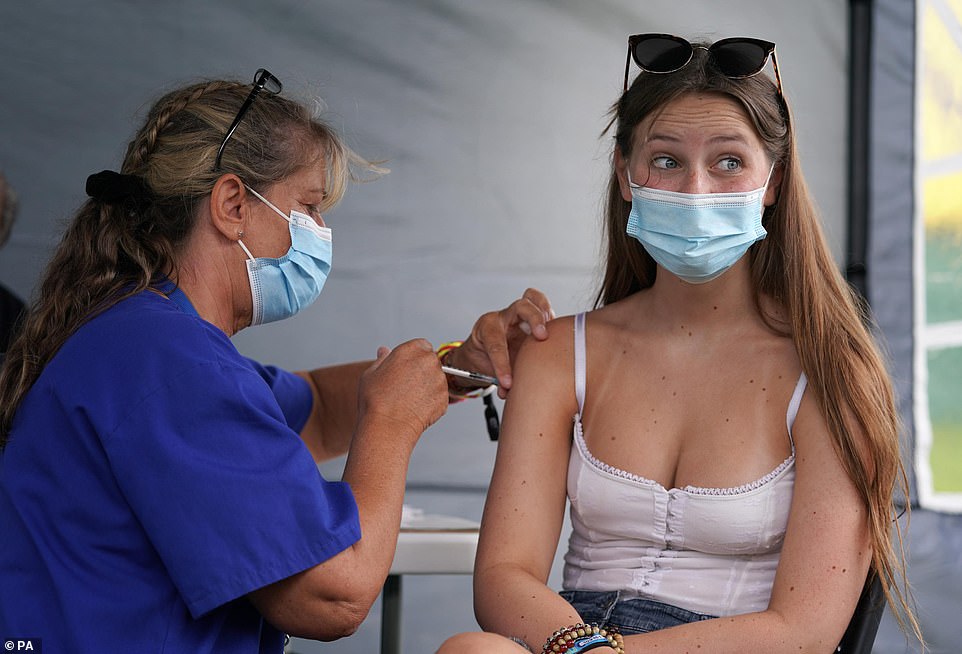 NHS England bosses have already told trusts to be ready to expand the roll out to all over-12s in just two weeks’ time as scientists warned the virus will ‘rip through schools’ unless pupils are immunised before the new term. Pictured: 16-year-old festival goer Lottie Beard getting a vaccine jab at a walk-in Covid vaccination clinic at Reading Festival today 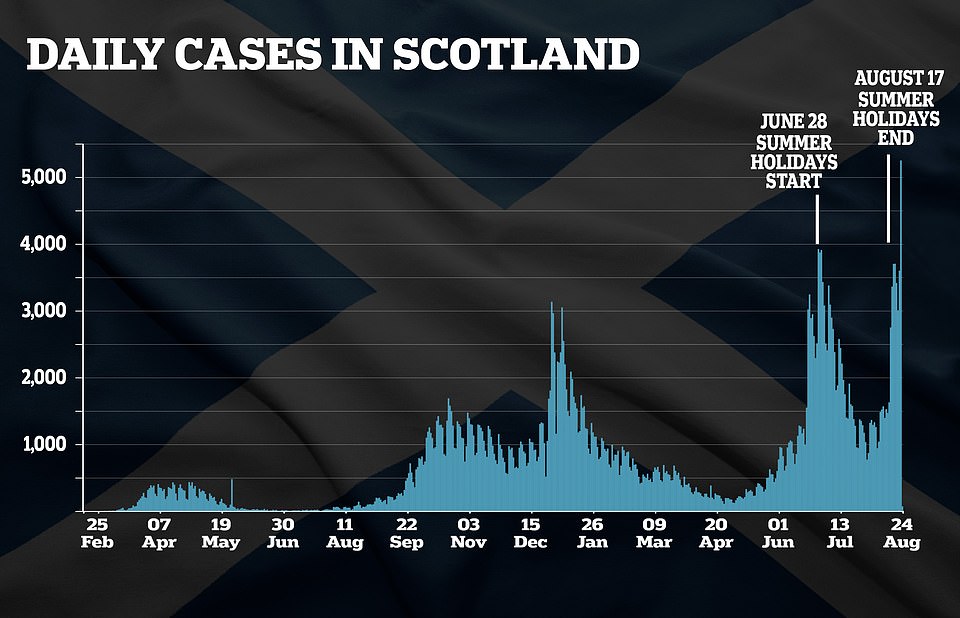 Covid cases in Scotland have spiked to new highs after schools returned last week. Today there were 4,925 cases, up almost 50 per cent on the previous week. There were 3,613 on Friday compared to 1,542 the previous week

But concerned parents today were divided on whether extending the rollout to children would have any benefit to the infection rate in the wider community.

Writing on mumsnet, one said: ‘If the Government were honest about the next four months, they’d say children are probably going to catch Covid, there is nothing to stop this happening.

They added: ‘But it could be “over” by November when the bad weather kicks in and older folk start getting ill as per usual circumstances.’

Parents are demanding they are given the final say on whether children get vaccinated against Covid at school in the coming weeks.

Education Secretary Gavin Williamson yesterday revealed parental consent would be needed for the rollout to be expanded to children aged 12 to 15.

But officials admitted teenagers could still receive a jab without their parents giving the go-ahead — but claimed such a scenario would be extremely rare.

Campaign groups have hit back at the plans to push through the inoculation drive to school pupils, claiming that children could be ‘peer-pressured’ into making ‘inappropriate’ decisions.

NHS England bosses have already told trusts to be ready to expand the roll out in just two weeks’ time as scientists warned the virus will ‘rip through schools’ unless pupils are immunised before the new term.

And Whitehall insiders say Boris Johnson wants the NHS to ‘crack on’ with vaccinating children. The Prime Minister has reportedly become frustrated with the Joint Committee for Vaccination’s (JCVI) — which advises No10 on jabs — delay in approving plans.

The controversy reached boiling point today when actor Laurence Fox claimed he would remove his and ex-wife actress Billie Piper’s children from school if parental consent is not required for jabs.

Scientists have been at war for months over whether to push ahead with expanding the rollout, with many experts claiming it may be better for children to catch Covid and recover to develop natural immunity than to be reliant on protection from vaccines, which studies suggest wanes in months.

Professor David Livermore, a microbiologist at the University of East Anglia, told MailOnline natural infection could be a ‘a better first step in the lifelong co-existence’ with the virus than rolling out the jabs.

Others were more keen to see jabs dished out in order to stop the Delta variant ripping through schools and disrupting learning.

One wrote: ‘I simply don’t see how schools can’t be disrupted. If school age children remain largely unvaccinated and there is no isolation of household contacts then a virus will do what viruses do.

‘Given the speed and transmissibility of the Delta variant I can’t see any other scenario playing out.

‘It won’t take government policy to close schools, it will happen of its own accord when staffing and pupil numbers are low enough due to high numbers off sick.’

But Dr Hoenderkamp said she was not satisfied the benefits of vaccines outweigh the potential risks from myocarditis.

Writing for Mail+ she said: ‘It’s important to say that I’m completely pro the normal UK vaccination schedule for children. It has been a force for good. My daughter has had every single one due, and an extra one that I paid for.

‘But all of these vaccines have a long history of use and long-term safety data with which I am happy and sure that the benefits for my daughter outweigh the risks.

‘In other words, that the benefit-to-risk ratio is satisfied. In my opinion, when it comes to this vaccination, this threshold has not been met.’

Other mothers say the decision should rest with children themselves, who are mature enough at the age of 12 to make informed choices on their bodies.

Writing in the Independent, she said: ‘Personally, I’d have no qualms about my nine-year-old daughter having the vaccine, if she wanted it, even now.

Ms Sturgeon suggested she wanted to push ahead with vaccinating children as coronavirus cases across Scotland have soared, with a record 6,835 new infections reported on Friday.

With schools having returned in Scotland earlier in August, she stressed the importance of a decision being made on whether to vaccinate more secondary school pupils.

Teenagers aged 16 and 17 are already being given the Pfizer vaccine, in line with JCVI advice.

Ms Sturgeon, speaking at a Scottish Government coronavirus briefing, said: ‘I really hope that the JCVI feel that the evidence allows them very, very soon to recommend vaccination for all 12 to 17-year-olds.’

Professor Leitch added: ‘We are ready for when that advice comes, the vaccination programme is ready to go.’

Ms Sturgeon said ‘ideally’ a decision on this would have been taken in time to allow secondary school pupils to get vaccinated before going back to school after summer.

She noted: ‘Scottish schools go back earlier than elsewhere in the UK and I would have ideally liked that to have been the case before our schools go back, but the sooner we get to that point where the JCVI feels the evidence allows them to make that recommendation, I hope they do that quickly.

‘There are many countries across the world that are already vaccinating 12 to 17-year-olds, clearly there are expert groups there who think this is safe to do.

‘I suppose if I was making a plea to the JCVI, it is not for me to tell them what decision to reach, they have got to do that on the basis of the evidence, but please make it quickly. 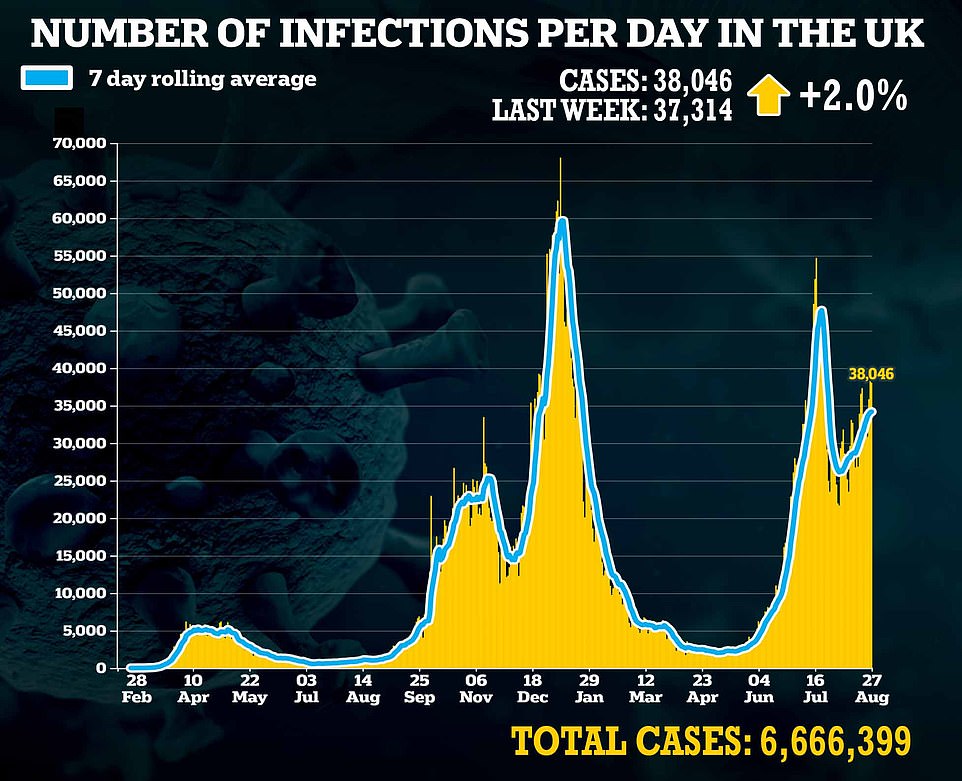 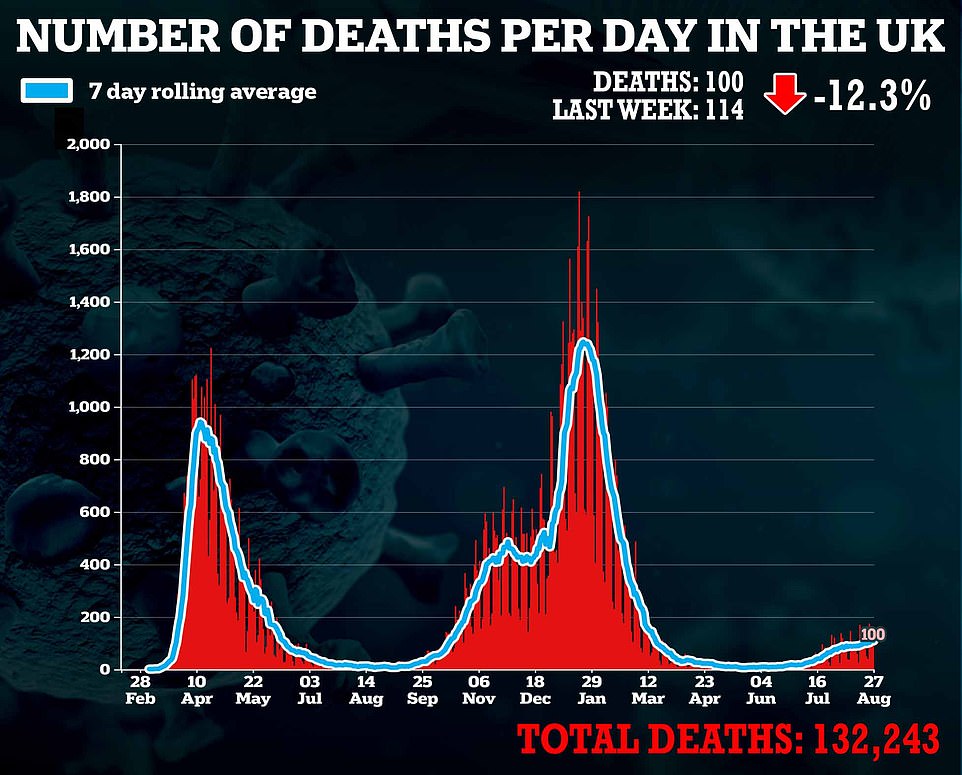 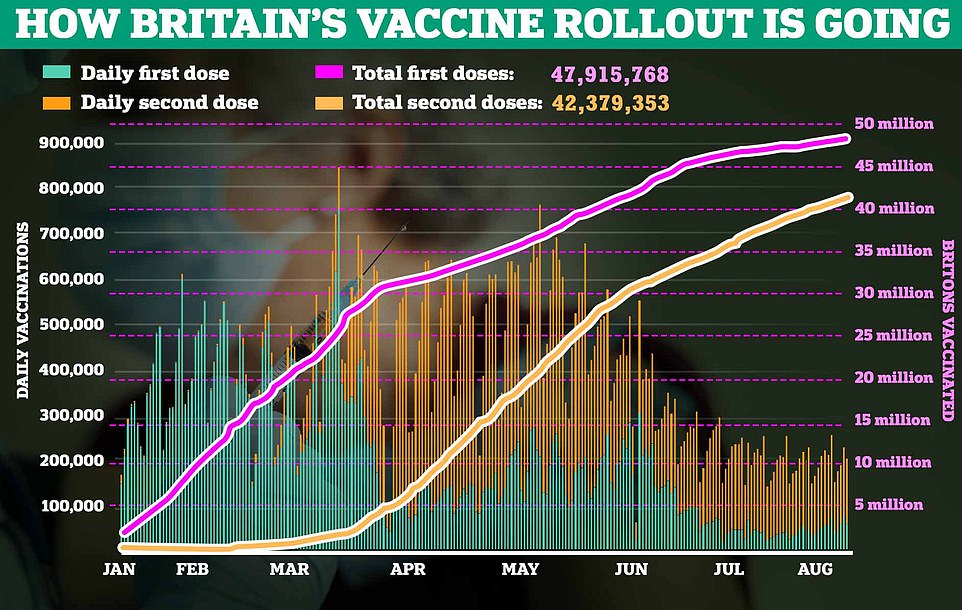 But scientists told MailOnline that nothing has changed in the data to suggest the risks of vanishingly rare heart inflammation is any less common in young people than it had been when the JCVI initially decided not to extend the rollout.

Data from the Centers for Disease Control and Protection (CDC) in the US — which has already begun jabbing over-12s — shows the risk of myocarditis after a Pfizer first dose remains the same as it ever was.

Likewise, the current rise in infections in late teens and predicted rise in cases next week when children return to classes was already predicted.

And Professor David Livermore, a microbiologist at the University of East Anglia, suggested the move could may have been caused by political pressure.

He said: ‘The core facts haven’t changed — children and adolescents are at minimal risk from severe Covid, meaning that the very rare but occasionally serious side effects of vaccines are likely to be the greater hazard.

‘This is the absolute converse of the situation for the elderly, where vaccination, including boosters, is warranted.

‘Only the Government can say what motivates them. The spike in infections as schools return in Scotland? Pressure from the teaching unions? Or just a general sense of panic leading to the desire to jab anything in sight?

‘The JCVI remains very cautious. The pressure isn’t coming from them, and there is nothing here that constitutes “Following the science”.’