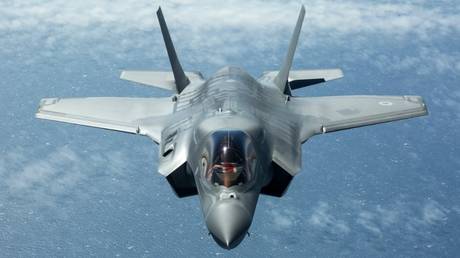 Leaked video shows how an F-35 fighter jet plunged into the sea after trying to take off from the British aircraft carrier HMS Queen Elizabeth. The incident was reportedly blamed on human error.

The incident took place on November 17, but the video was leaked on social media on Monday.

The jet was accelerating up the ramp aboard the aircraft carrier HMS Queen Elizabeth and dived into the Mediterranean Sea after failing to take off. The pilot safely ejected.

The Sun reported at the time that the plane likely crashed because its engine sucked in a plastic rain cover that was left on the deck. Sources told the paper that human error and bad oversight were to blame for the loss of the aircraft.

The Telegraph said on Tuesday that authorities have still not found the jet, because it likely ‘flew’ underwater for some distance.