One of Cristiano Ronaldo’s biggest sponsors removed pictures of him from its website and Twitter account after saying it was ‘closely monitoring’ rape allegations against the footballer.

The images later reappeared on the computer games company EA Sports’ website after the Daily Mail raised questions about it.

Ronaldo, 33, is the face of the firm’s FIFA 19 computer game, in what is understood to be a multi-million-pound deal.

EA Sports said it had not deleted images of the player, although this ‘may have been mistakenly taken as action on our part’ during updates to its website.

It came after the company released a statement saying: ‘We have seen the concerning report that details allegations against Cristiano Ronaldo.

‘We are closely monitoring the situation, as we expect cover athletes and ambassadors to conduct themselves in a manner that is consistent with EA’s values.’ 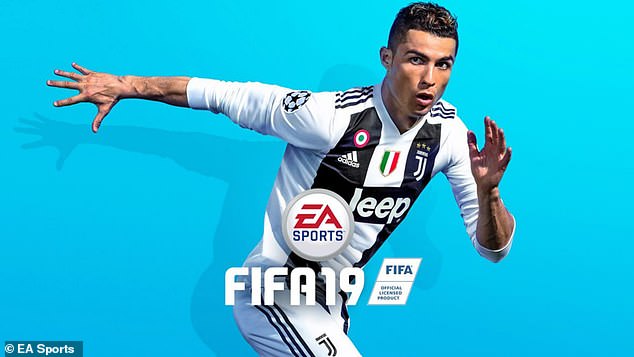 It comes after Nike said on Thursday it was ‘deeply concerned’ about claims made by Kathryn Mayorga. The sportswear firm is Ronaldo’s biggest sponsor, having signed a lifetime deal in excess of $1billion (£763million) with him in 2016.

Miss Mayorga, 34, a former teacher, has filed a US lawsuit claiming Ronaldo raped her on June 13, 2009, in his penthouse suite at the Palms Casino Resort in Las Vegas.

She met him at Rain, a nightclub that forms part of the resort, on a night out with friends. She said this week she ‘wants justice’ over the alleged incident after previously signing a non-disclosure agreement for £270,000. 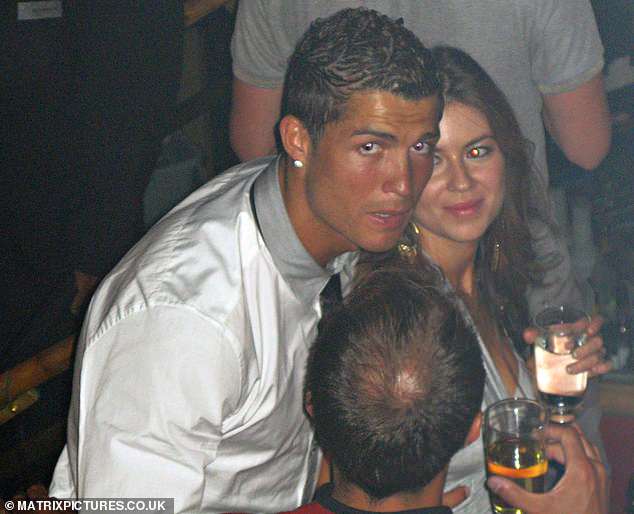 Cristiano Ronaldo is pictured with Kathryn Mayorga, who has alleged she was raped by him

Her lawyers claim the agreement is not valid and that Ronaldo had himself breached it. They have promised to begin releasing documents relating to the case in the coming days, including the results of a medical examination.

Police in Las Vegas have reopened an investigation into the claims after Miss Mayorga’s lawyers handed over a dossier of evidence. It remains unclear whether Ronaldo will be asked to give evidence.

The footballer said in a statement: ‘I firmly deny the accusations being issued against me. Rape is an abominable crime that goes against everything that I am and believe in. 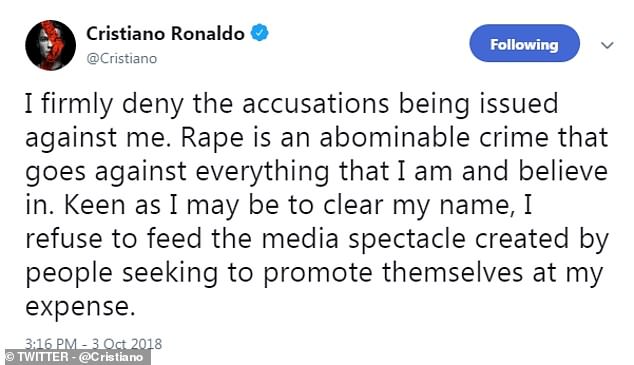 ‘Keen as I may be to clear my name, I refuse to feed the media spectacle created by people seeking to promote themselves at my expense.’

The rape allegations were only revealed after millions of documents concerning the world of football, including claims about investments in offshore firms, were leaked by a whistleblower.

Amid the 18.6million documents were a number that focused on the alleged 2009 assault. The claims were then pursued by the German news magazine Der Spiegel.

The former teacher who has accused Cristiano Ronaldo of raping her was briefly married before the alleged attack.

Kathryn Mayorga, 34, grew up in a sprawling family home in one of the most pleasant neighbourhoods of Las Vegas, overlooking the city’s famous Strip.

The daughter of a firefighter and stay-at-home mother, she was an aspiring model when she met the footballer in 2009 soon after separating from her husband. It is not clear if the pair were still legally married at the time of the alleged rape.

Miss Mayorga was married to a bar worker from an Albanian family who also worked part-time in computer repairs. ‘At that age, I’d graduated college, I needed to be married, I had that pressure,’ she told the German magazine Der Spiegel. ‘And at first, I was on board with it.’

But around a year after marrying, the couple separated and Miss Mayorga left the house they bought together, moving back in with her parents.

Speaking about life after the separation, she said: ‘I was really enjoying myself. I was working out every day, eating vegan … doing a lot of good stuff with modelling.’

It was during this time that she met Ronaldo on a night out with friends at Rain, a nightclub at the Palms Casino Resort.