Does Boris Johnson have any real plan to stop empty supermarket shelves this Christmas, fix the threat of rampant inflation, tackle a chronic lack of HGV drivers or deal with the biggest cost of living crisis in a generation caused by a year of lockdowns?

After his speech today at the Conservative party conference, there was only one, very depressing answer: Hell no!

Of course, there were rhetorical flourishes, poetic historical references, nonsensical catchphrases (‘Build Back Beaver, Build Back Burger’), and a collection of optimistic platitudes and obscure jokes.

The Tory faithful in Manchester remained bewitched by their ever-popular leader – vintage Boris, they said, with passion, pluck and patriotic positivity.

He won London, he delivered Brexit, he obliterated Corbyn, he survived Covid, and he remains ahead in the polls… Boris will do it again! 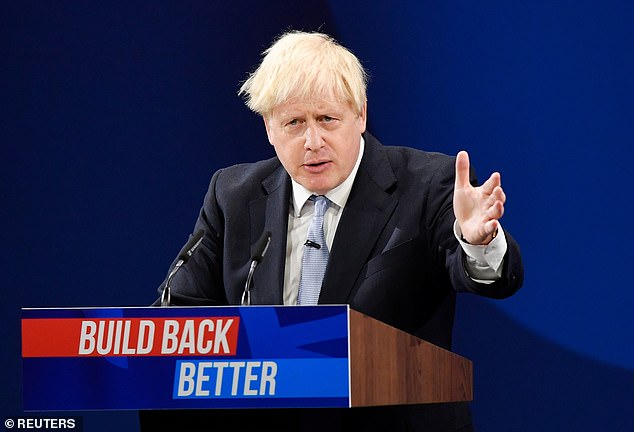 The Tory faithful in Manchester remained bewitched by their ever-popular leader – vintage Boris, they said, with passion, pluck and patriotic positivity. But as he remained in full flow on stage, one of Boris’ most loyal backers texted me: ‘I really dislike this man now. I actually can’t view him as I used to. It’s just vacuous platitudes, he doesn’t have a clue’

But as he remained in full flow on stage, one of Boris’ most loyal backers texted me: ‘I really dislike this man now. I actually can’t view him as I used to. The illusion is shattered. It’s just vacuous platitudes, he doesn’t have a clue.’

A Tory government seemingly at war with business, who they claim are ‘drunk on cheap labour’, is certainly uncharted territory.

A Tory government embracing higher taxes, a nanny state, draconian controls on the way we live our lives and record borrowing without any meaningful political opposition is frankly terrifying.

The PM might claim that he is invoking the spirit of Margaret Thatcher by insisting ‘there is no alternative’, but that’s as disingenuous as saying Boris looked comfortable when his limelight-loving wife Carrie came to join him on stage (he scarpered out of that hall in less than a minute). 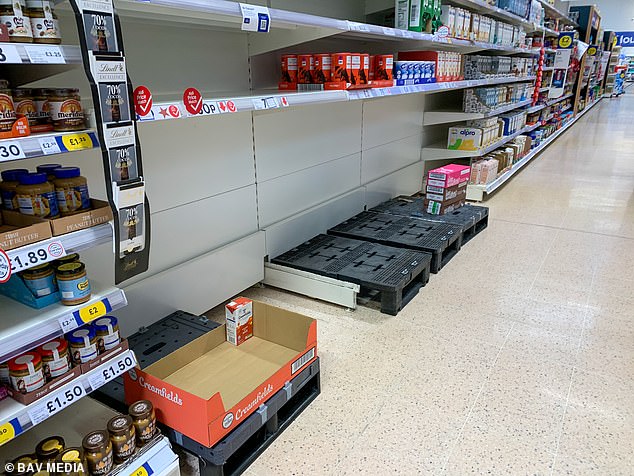 Does Boris Johnson have any real plan to stop empty supermarket shelves this Christmas? After his speech today at the Conservative party conference, there was only one, very depressing answer: Hell no! Pictured: Empty shelves as a Tesco in Ely, Cambridgeshire

He claimed during his speech: ‘Does anyone seriously imagine that we should not now be raising the funding to sort this out? Is that really the view of responsible Conservatives?

‘I can tell you something, Margaret Thatcher would not have ignored the meteorite that has just crashed through the public finances. She would have wagged her finger and said: “More borrowing now is just higher interest rates and even higher taxes later”.’

But I can tell you something, Prime Minister, Maggie would never have effectively shut the economy down for a year and a half, borrowed like there was no tomorrow and then told businesses to deal with their own problems, come what may, and to hell with the consequences for consumers.

It’s painful to realise, especially for someone who backed Boris to be PM like myself, but the big man is making it up as he goes, blaming whoever is most politically palatable for each particular crisis, be it the doomsday scientists or big business.

If a lengthy and painful transition to a high-wage economy – with the inflationary pressures that come with such a move – was always part of the plan, then why didn’t he warn us?

Why didn’t he plan for it?

Why, for example, has his government made the short-term labour crisis worse by not processing HGV licences at a rapid rate or by helping desperately needed butchers work in the UK to avoid a wholly unnecessary pig slaughter?

The government looks far too complacent and that’s most likely going to come back and bite Boris on the ass – probably this winter, which has all the signs of the discontent of 1978.

The PM painting this mess as a binary choice between uncontrolled immigration and high pay for Brits is nonsense. 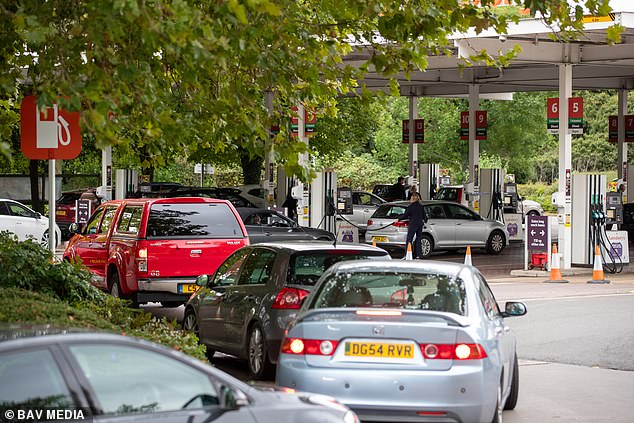 While Labour remains in its own crisis with born loser Sir Keir Starmer in charge, the Tory party and its privately unhappy backbench MPs might stomach this mess. But if we can’t buy a turkey or fill up our car with petrol this Christmas, the public won’t any longer. Pictured: Cars line up outside petrol pumps in Cambridge yesterday

Brexit was about us closing the open door to cheap labour from Europe to control our own immigration policies, allowing us to choose to grant short-term access to foreign folk with the skills our economy is lacking.

This guy is presiding over building the biggest government we’ve ever seen. He has micromanaged our lives for the last 18 months. He has done little to reduce regulation.

He doesn’t seem to give a damn about inflation which, if it leads to higher interest rates (as it has in New Zealand this week), could bankrupt the treasury because we are unlikely to be able to service the ballooning national debt.

And illegal migrants have poured into the country from France via the Channel in record numbers all summer long, making a mockery of our legal immigration policy.

That disastrous recipe of unlikely Tory policies makes Boris not the heir to Maggie but the anti-Thatcher.

And this is not a minor tiff with business. Boris has dumped the sector just like he did Jennifer Arcuri – and they’re feeling equally scorned.

Take Craig Beaumont of The Federation of Small Businesses who told Politico’s Playbook today: ‘The party of business is just walking off the pitch…all we get from a Conservative conference is a heady mix of tax hikes and blame.

‘Not a single small business person wants uncontrolled migration; it’s a completely false fiction. Inflation is rising, employment costs are up, 50,000 more people will join the unemployed, energy bills are up, fuel’s hard to find.

‘The problems with recruitment, skills and pay are local and under government’s control – this is where it needs to discover its guts and grit.’

Or to put it even more bluntly, as Liz Barnes, boss of the wet wipes firm FreshWipes, told MailOnline of Boris’ Build Back Butter social media video: ‘If he likes alliteration, Boris can shove his butter up his backside.’

While Labour remains in its own crisis with born loser Sir Keir Starmer in charge, the Tory party and its privately unhappy backbench MPs might stomach this mess.

But if we can’t buy a turkey or fill up our car with petrol this Christmas, the public won’t any longer.

One of Boris’ jokes today made me absolutely seethe.

‘Crime has been falling and not just by the way because we took the precaution of locking up the public for much of the last 18 months,’ he gagged.

It’s appalling to me that an unprecedented lockdown that has caused so much misery – to our health, to our very way of life and to our economy – has become a punchline.

It’s largely Boris’ reaction to the pandemic, not Brexit, that has left us facing this current crisis.

No one questions our unrivalled vaccine rollout – it was sensational.

But we allowed that advantage to get away from us by maintaining draconian, economy-destroying regulations to remain in place for far too long.

Boris also finally urged workers to return to the office today, saying: ‘We know that a productive workforce needs that spur that only comes with face-to-face meeting and water cooler gossip.

‘If young people are to learn on the job in the way that they always have and must, we will and must see people back in the office.’

But how is he going to achieve that?

It is his government that created a scenario where entitled white collar workers and lazy civil servants feel they never have to go into the office again.

Boris Johnson is an endearing leader and a true patriot.

Today’s defence of his hero Winston Churchill against the ‘know nothing, cancel culture’ mob who ‘really do want to rewrite our national story’ was the Prime Minister at his best.

But Churchill and Thatcher, the two leaders he invoked today, had Conservative values at their core.

They knew the answer wasn’t attempting to ape the Labour party or move the Tories to the left for short-term political expediency.

I like Boris very much, personally. It’s hard not to, which is his greatest gift.

But we are now hurtling headfirst towards economic disaster, social turmoil and the total unravelling of Tory values.

After today, standing by quietly and watching that happen is no longer an option.

‘Give it up for our very Jon Bon GOVEY’: All the gags from Boris’s joke-laden Tory conference speech #Give #Jon #Bon #GOVEY #gags #Boriss #jokeladen #Tory #conference #speech