DC Comics has ditched the mention of ‘The American Way’ from Superman’s motto in favor of the superhero fighting for a ‘better tomorrow.’

The 83-year-old character’s longstanding adage used to be ‘Truth, Justice and the American Way’.

But the publisher said that his new mission statement will be ‘Truth, Justice and a Better Tomorrow.’

DC did not specifically address why they had ditched America from the slogan, but instead maintained that they were focused on ‘evolving.’

‘To better reflect the storylines that we are telling across DC and to honor Superman’s incredible legacy of over 80 years of building a better world, Superman’s motto is evolving,’ DC Chief Creative Officer Jim Lee said at the DC FanDome fan event on Saturday.

‘Superman has long been a symbol of hope who inspires people, and it is that optimism and hope that powers him forward with this new mission statement.’ 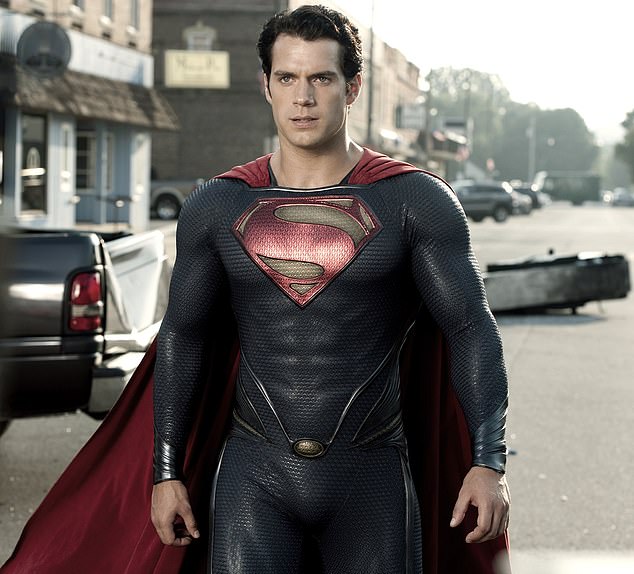 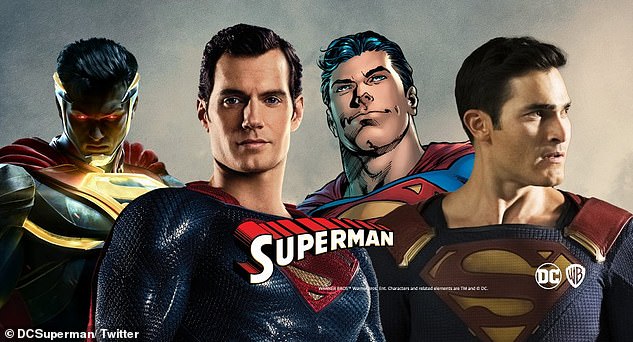 Superman goes modern: DC Comics announced a departure from Superman’s longstanding motto ‘Truth, Justice and the American Way’ on Saturday and replaced the patriotic portion with ‘a Better Tomorrow’

The superhero’s backstory is about as American as it gets — a boy raised in Kansas by two farmers who wears a costume in shades of red and blue that nod to the American flag.

The last time a Clark Kent-centered film hit the big screen was 2013’s Man Of Steel with Henry Cavill playing the titular character.

A nod to his American identity, in Justice League his character even says: ‘I’m from Kansas. It’s about as American as it gets,’ but Snyder said he had to fight to keep the line in the movie as he strove to portray ‘that perfect mix of Americana’.

Fans are torn on the new motto, with some proud of the superhero’s new motto and suggesting ‘the American Way’ isn’t as ‘American’ as people think, while others slam the notion that Superman is anything other than American.

One fan wrote: ‘I’m a fan of #Superman ‘s new motto: “Truth, Justice, And a Better Tomorrow.” It fits the character really well, sounds impactful, and hopeful. Overall I think it’s something a lot of people could stand to hear.’

Another fan encouragingly wrote: ‘Superman doesn’t fight for exclusively America. Him fighting for a better tomorrow is a better motto. He’s not the man of America, he’s for everyone.’ 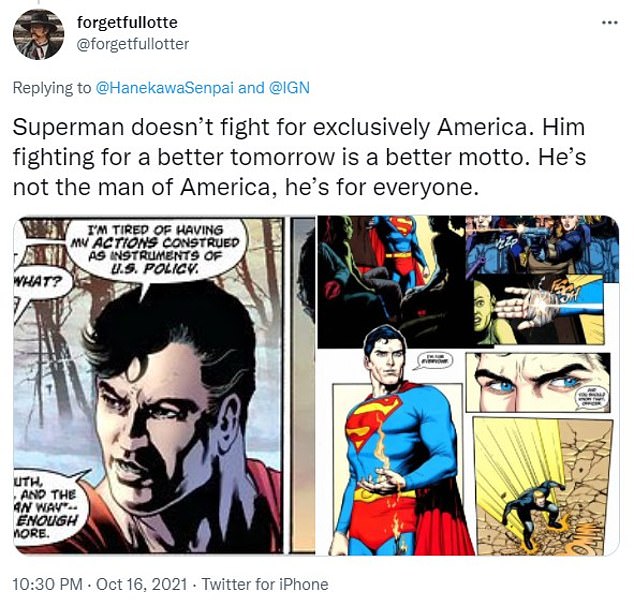 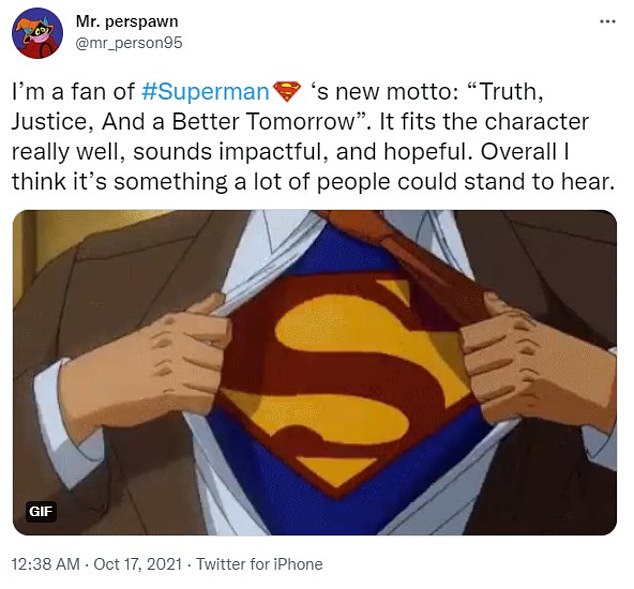 Fans are divided over the new motto, which some favoring the more inclusive stance, while others slammed it being that the character is born in Kansas by American parents and wears red and blue

The iconic superhero is known around the world, but others slam DC Comics for making ‘America’ the problem.

‘An American icon, raised in America by American parents – created by a pair of Americans for an American comic book publisher. But “the American way” is a problem,’ one critic wrote on Twitter.

Others questioned if ‘the American Way’ was even worth fighting, even by Superman. And that the new motto goes beyond just making Superman a fighter for everyone.

‘Changing Superman’s motto tells you that the American Way has just come to mean “for profit and with as little concern for humanity as possible.” Fix that and maybe it’s worth fighting for.’

History professor Julian Chambliss who specializes in superheroes and the American experience said in a statement to USA Today in 2013 that the ‘US experience’ is at the character’s core.

American hero: The decision to drop the American Way essentially denounces the character’s fundamental core, which is about as American as it gets — a boy raised in Kansas by two farmers who wears a costume in shades of red and blue that nod to the American flag; character pictured on US postage stamps issued September 2021

‘The core narrative in Superman has been and continues to be the values and belief about the US experience being strong enough and good enough to address the troubles facing the generation engaged with the character.’ 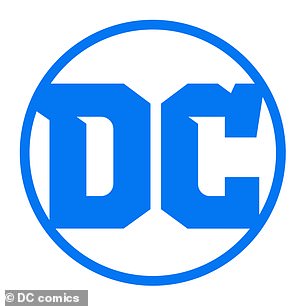 Evolution: ‘To better reflect the storylines that we are telling across DC and to honor Superman’s incredible legacy of over 80 years of building a better world, Superman’s motto is evolving,’ said DC Chief Creative Officer Jim Lee said at the event

Superman’s motto isn’t the only thing changing in DC Comics.

The company recently announced that the current Superman of Earth, Jon Kent (Clark’s son) would be coming out as bisexual and begin dating a refugee ‘hacktivist’ reporter.

The change will come in a November issue of Superman: Son of Kal-El.

‘They said it’s a bold new direction… I say they’re bandwagoning,’ Cain said in his on-air interview. ‘Robin, of Batman and Robin, just came out as bi or gay recently and honestly who’s really shocked about that one? I had some thoughts about that a long time ago.’

‘They’re talking about him fighting real-world problems like climate change and the deportation of refugees and he’ll be dating a “hacktivist” whatever a “hacktivist” is, I don’t know.

Plot twist: DC Comics announced on Monday that the new Superman, Jonathan Kent, the son of Clark Kent and Lois Lane, will begin dating a refugee ‘hacktivist’ reporter in a new issue

Additionally the next Superman film is rumored to be starring a Black Superman for the first time.

It was previously reported that J.J. Abrams would be producing the project and Hollywood Reporter insiders said that Warner Bros. and DC were committed to hiring a Black director.

The Flash film producer Barbara Muschietti, also hinted that Cavill’s Superman may be making an appearance in the 2022 movie by way of a ‘liked’ Instagram comment.

When one fan commented that they were hoping to see a ‘#henrycavillsuperman cameo’ Muschietti like the comment, as seen in a Twitter video obtained by The Flash Film News. 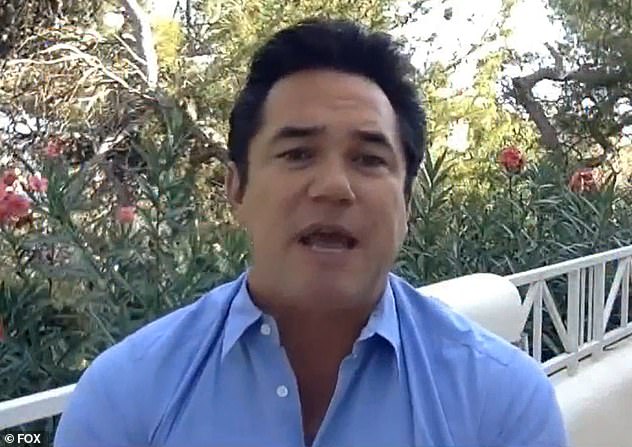 Outcry: Former Superman actor Dean Cain has accused DC Comics of ‘bandwagoning’ after the company announced that the legendary superhero is bisexual

They might be popular, but London’s NFL games have been largely TERRIBLE #englishheadline #popular #Londons #NFL #games #largely #TERRIBLE