EA Sports are continuing their FUTTIES event in FIFA 18 with another End of an Era card, this time for Roma and Italy legend Daniele De Rossi.

The 35-year-old hasn’t retired from football but did retire from international duty last year after Italy failed to qualify for the World Cup. He will still be playing for AS Roma though, the only club who he has ever played for – making over 441 appearances for the Serie A side. 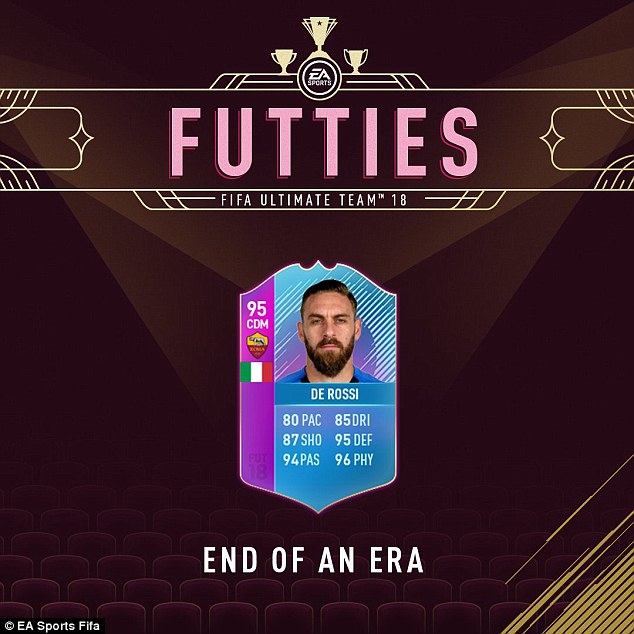 His card looks ridiculously strong with an overall of 95 and is a new member of the ‘Gullit club’ a term made up by FIFA cards which have all their stats rated 80 or higher.

De Rossi’s pink and blue card excels at everything with 80 pace,85 dribbling, 87 shooting, 95 defending, 94 passing and 96 physicality plus a four-star weak-foot.

Things get even more impressive once you dive into his in-game stats with various stats all rated at 99. He has perfect scores of 99 in shot power, long shots, volleys, penalties, short passing, long passing, composure and interceptions.

If you want to get your hands on this card, it might be easier than you’d expect. All you have to do is complete a Squad Builder Challenge which only requires one squad to be submitted.  The requirements for the squad is a minimum of one Roma payer and two Calcio A players plus at least two Team of the Week players, a team rating of 86 or higher and chemistry of 70 or higher.