The Department of Homeland Security is spending $456,548 to build a security fence around Joe Biden‘s Delaware summer house – a property he has visited twice in the nine months since he became president.

This comes as Biden refuses to finish Trump’s border wall while illegal migration reaches record highs. New September figures revealed 1.7 million migrants have been apprehended so far this year- the highest number of illegal crossings recorded since at least 1960.

The president and first lady evening left Washington DC on Friday evening for their main family home, in Wilmington, Delaware.

Of the first 29 weekends of his presidency, Biden spent just six at the White House, according to an NPR analysis in August.

He was in Wilmington for 14 of those weekends, and Camp David, the presidential retreat in Maryland, for eight.

By contrast, he has been at his Rehoboth Beach holiday home, 100 miles from Wilmington, only twice since becoming president: once in June, to celebrate Jill’s 70th birthday, and again in September. 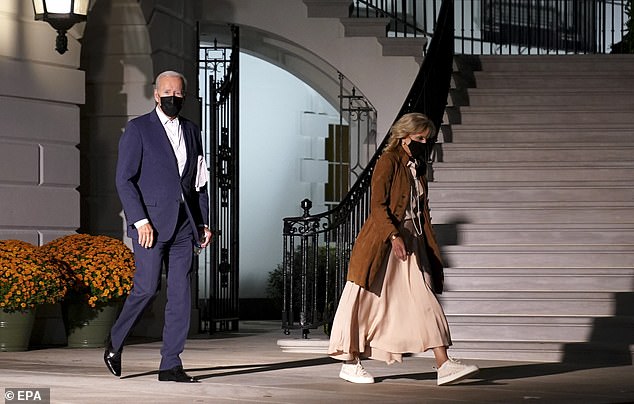 Joe and Jill Biden are seen on Friday night leaving the White House, to spend the weekend at their family home in Wilmington, Delaware. Meanwhile their beach house in Rehoboth, Delaware – 100 miles from the Wilmington house – is being upgraded 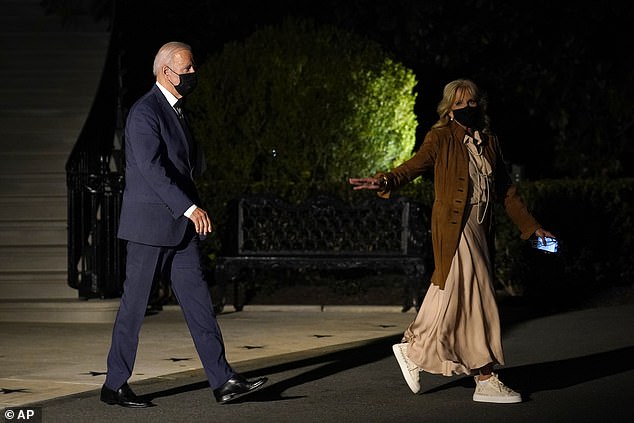 The Bidens have called Wilmington home for decades. Joe Biden bought the plot on which his current home in the town stands in 1996 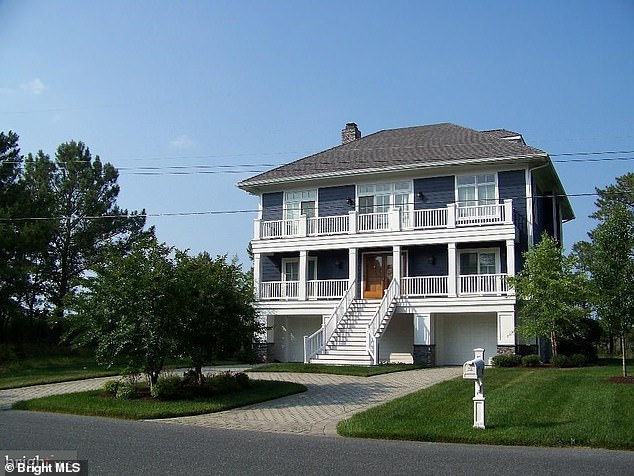 Joe and Jill Biden’s summer house, in Rehoboth, Delaware, is currently having a fence built around it at a cost of almost $500,000 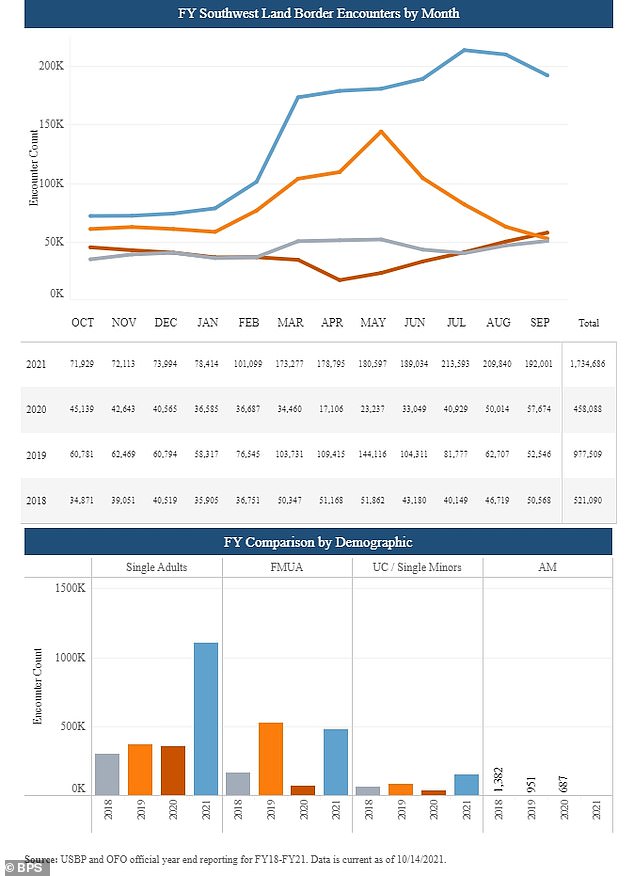 ‘Maybe walls do work after all.’

Of the 192,00 migrants who tried to cross the border illegally in September, 59 per cent were single adults.

More than 53 per cent of those who arrived were processed for expulsion under Title 42, the CDC’s coronavirus public health order, according to Customs and Border Patrol.

Encounters of unaccompanied children decreased 24 per cent, with 14,358 encounters in September compared with 18,806 in August.

In September, the average number of unaccompanied children in CBP custody was 772 per day, compared with an average of 1,435 per day in August, according to the agency.

Only 27 per cent percent of family units encountered at the southern border were expelled under Title 42, while 75 per cent of single adults were.

Just this month, the Biden Administration announced that they are cancelling the few remaining border wall contracts in the Laredo and Rio Grande Valley sectors.

Biden has continued to end contracts and shut down construction of Trump’s border wall since he became president. One of this first actions as president was to halt construction to review the project and its funding.

But while construction of the border is being shut down, the Bidens’ summer house is now being upgraded, at the cost of almost half a million dollars.

The contract states that construction on the Biden’s summer house began on September 21, and should be completed by December 31.

The work is being carried out by a local company in Rehoboth, Turnstone Holdings.

The cost will raise eyebrows, given that the president already has access to a vacation getaway, at Camp David.

The country retreat, in Catoctin Mountain Park in Frederick County, Maryland, has offered every president since Franklin D. Roosevelt a respite from Washington DC. 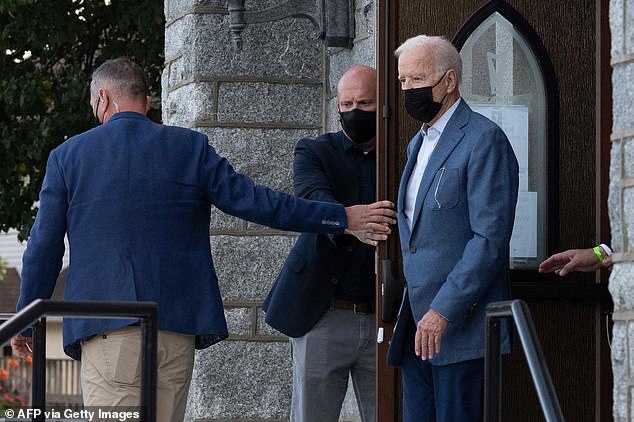 Biden departs a church service at St Edmond Catholic Church in Rehoboth Beach on September 18, during one of only two visits to his summer house as president 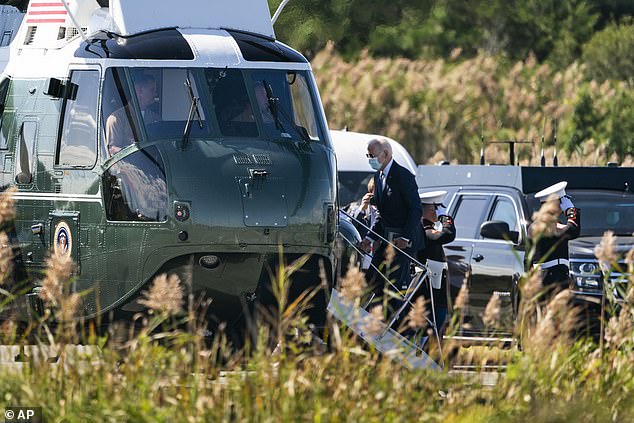 The White House describes Camp David as a place that offers ‘an opportunity for solitude and tranquility, as well as an ideal place to work and host foreign leaders.’

The estate boasts two swimming pools, a hot tub, and a series of log cabins for guests.

Biden has spent eight weekends at the retreat since his January inauguration, including Easter and Mother’s Day, according to the About Camp David blog.

His predecessor, Donald Trump, was less enamored by the Maryland estate, only visiting five times in his entire first year.

In the second year of his presidency, 2018, he was there even less – only visiting twice.

Trump instead preferred his own resorts – Mar-a-Lago, Florida in the winter, and his Bedminster golf course, New Jersey, in the summer. 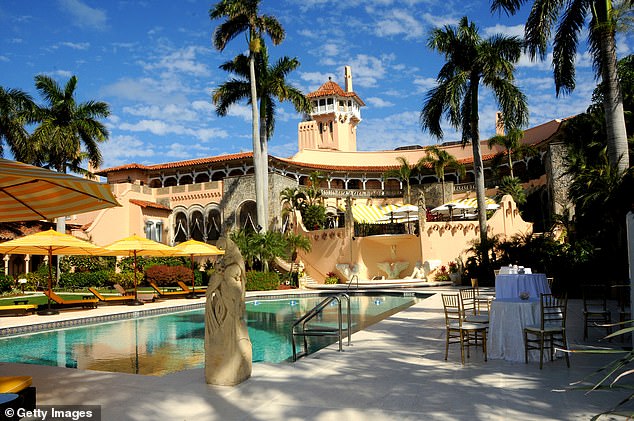 Donald Trump used his Florida estate, Mar-a-Lago, frequently while president, referring to it as the ‘winter White House’. His trips had cost an estimated $81 million by May 2019 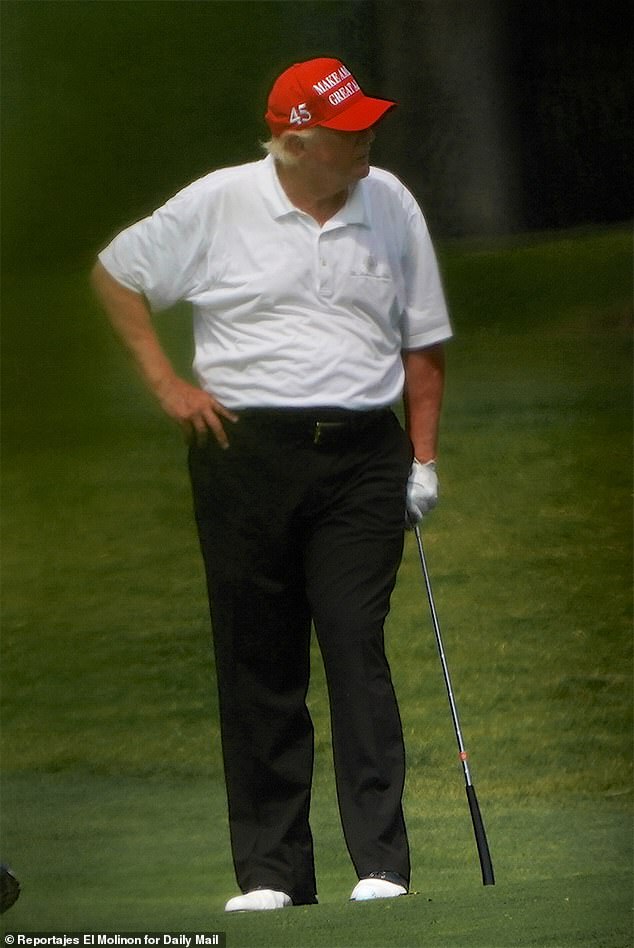 Trump is pictured playing golf at the Trump International golf course in Palm Beach, Florida – near his Mar-a-Lago home

An analysis by The Huffington Post published in May 2019 put the total cost of trips to Mar-a-Lago in the three years to that point at $81 million – a figure which does not include Palm Beach County’s $13.7 million bill, for which they were reimbursed.

The Obamas did not have a holiday home.

They owned a townhouse in Chicago while Barack was president – a throwback to his role as senator for Illinois – but the house was used infrequently by the Obamas while they were in the White House, as the family preferred to rent vacation homes in Hawaii and Martha’s Vineyard.

It boasts five bathrooms and one half-bath, and has a top-of-the-range kitchen, three fireplaces and multiple decks and porches.

Outside is a stone patio, fireplace, summer kitchen and outdoor showers and dog wash.

The Bidens have also added a swimming pool. 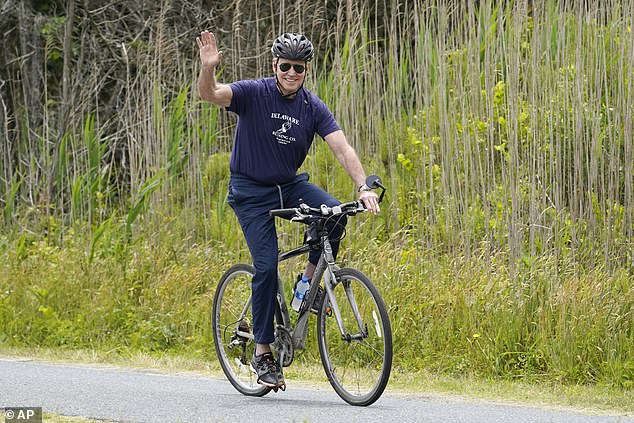 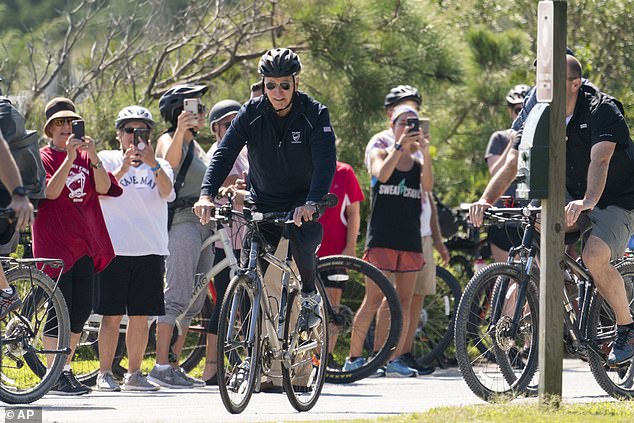 Surrounded by Secret Service agents, Biden enjoyed the bike paths near his summer home on September 19

‘Throughout our careers, Jill and I have dreamed of being able to buy a place at the beach at home where we can bring the whole family,’ he said at the time.

‘We feel very lucky that we’re now able to make that happen and are looking forward to spending time with our family in the place that matters most to us in the world.’

The home sits in the North Shores neighborhood of Rehoboth, near the beach and the Gordons Pond section of Cape Henlopen State Park, where the Bidens have been spotted riding bikes on a trail through wetlands during visits.

Secret Service details are posted at all homes belonging to the president around the clock, even when they are not there.