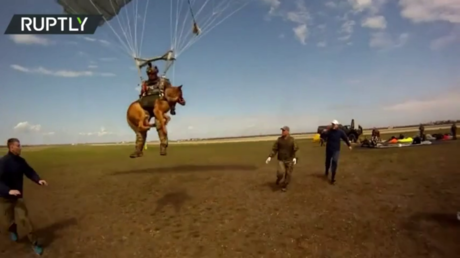 A new type of parachute that enables a paratrooper to jump to the ground with a service dog will be deployed to the Russian Armed Forces next year, its manufacturer has revealed.

In a Thursday statement sent to the TASS news agency, Russia’s Technodinamika Holding explained that tests should be completed by the end of 2021.

“Deliveries of the suspended dog system to the Russian Defense Ministry will begin in 2022 after the product is accepted for supply,” the holding said. Technodinamika is owned by Rostec, a state-owned conglomerate that invests in the defense industry.

The system is designed to enable a dog to jump from a maximum height of 4,000 meters, alongside just a parachutist or a parachutist with a special dog handler.

In July this year, Technodinamika released footage of the system being tested. At the time, chief designer Aleksey Kozin revealed that the parachute would enable search-and-rescue operations in areas inaccessible to a plane or helicopter. He also stated that the dogs react well to the jump and remain calm both throughout and afterward.

Kozin also announced that his company plans to create oxygen gear for dogs in the near future. This would enable skydives from a higher altitude than 4,000 meters.