Not only does the player get the prestige of being the best, they also get an upgrade in EA Sports’ FIFA 18, and you can vote for who gets it.

This month there are seven players on the shortlist, including a couple of regulars along with a handful of new faces. 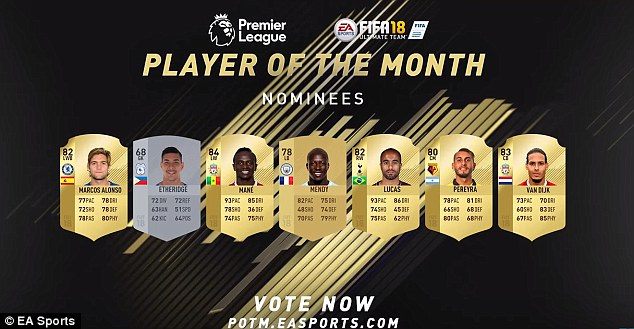 Liverpool’s Sadio Mane was on fire last August, and won the award 12 months ago, and here he is, on the shortlist again after a roaring start to the 2018/19 season. He’s scored three goals already from his eight shots, and his passing accuracy is up at a pretty decent 77% too.

He’ll be facing stiff competition from the likes of Marcos Alonso, who has made a great start to the season for Chelsea. He’s racked up a goal, an assist, a clean sheet, as well as 89% passing accuracy.

Neil Etheridge, goalkeeper for the newly promoted Cardiff City, also makes the cut. He’s made nine saves so far, including a penalty, all while keeping two clean sheets. His basic card is just silver, so it’ll be a nice upgrade for him if he wins.

Manchester City haven’t quite made the start they wanted to, but Benjamin Mendy has been on form. They’ve kept a clean sheet with him in defence, and he’s made four key clearances. Not only that, Mendy has also made passes with 86% accuracy, and he’s already got an amazing three assists so far this season.

Lucas Moura performed extremely well last week against Manchester United, and he’s grabbed himself three goals from his five shots, along with a 70% passing accuracy in the three games so far.

Watford’s Roberto Pereyra is another player sitting on three goals from three games so far this season, taking eight shots. Plus, his passing accuracy is up at 79%.

Finally, we head to Liverpool again with Virgil Van Dijk. Liverpool haven’t conceded a single goal yet this season, and Van Dijk has contributed to those three clean sheets with 11 clearances. He also happens to have an incredible 94% passing accuracy.

Will we have a repeat winner? Or will a new face take the prize and the FIFA 18 upgrade? It’s your call.