Insulate Britain today compared people who do not act on climate change to those who were ‘passive and indifferent to the rise of Nazi Germany‘ before the Holocaust.

The eco zealots have blocked roads on 19 days since September 13, causing misery for drivers stuck in queues around London, Manchester, Birmingham and Dover.

And they said today that anyone who is ‘silent now ‘on environment causes ‘will be known as bystanders’ like those in Germany who did not stand up to the Nazis.

This morning, an Insulate Britain spokesman said in a tweet: ‘Those who know and are silent now will be known as bystanders, just as those amongst the general population in Germany who were passive and indifferent to the rise of Nazi Germany and the escalating persecution that culminated in the Holocaust. #savelives.’

However, amid a backlash, the group deleted this tweet less than two hours later and said instead: ‘Those who know and are silent now will be remembered as painfully and cruelly as those who ignored the horrors of Nazi Germany.’ 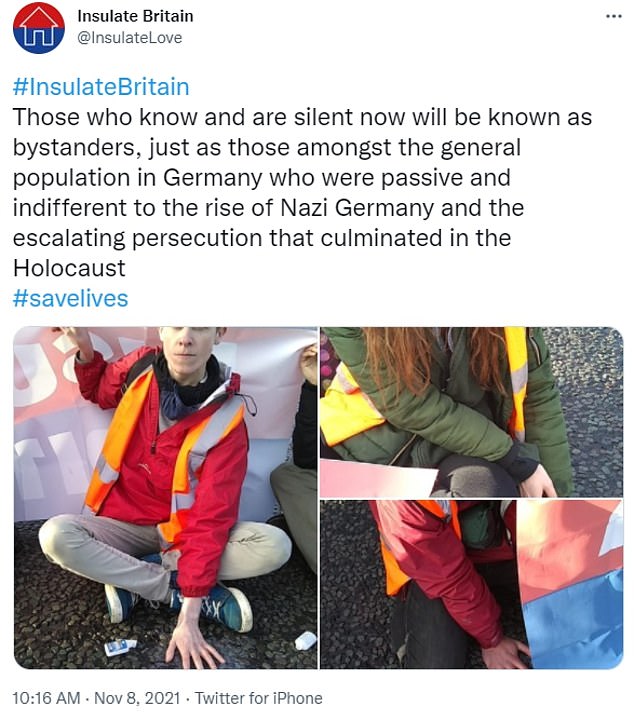 It comes after Justin Welby apologised last week after claiming that world leaders who fail to act on climate change could be worse than those who ignored the Nazis.

A Campaign Against Antisemitism spokesman told MailOnline today: ‘Comparisons to Nazi Germany risk trivialising the suffering and murder of the six million men, women and children who died at the hands of that regime.

‘Archbishop Welby did the right thing by issuing an unreserved apology.

‘It is startling that Insulate Britain should double down on the comparison and baselessly reference the Holocaust, which was a deliberate and systematic genocide, entirely different from the perceived climate apathy which the fringe group is protesting.

‘Insulate Britain will find that making such comparisons will not strengthen its cause.’

And Olivia Marks-Woldman, chief executive of the Holocaust Memorial Day Trust, told MailOnline: ‘We are always disturbed when people invoke Holocaust imagery to gain support for their causes.

‘We recognise that in some instances this is a well-meaning attempt to show a belief that a contemporary situation is on a par with the most appalling episode in our collective consciousness.

The group deleted the original tweet and said instead: ‘Those who know and are silent now will be remembered as painfully and cruelly as those who ignored the horrors of Nazi Germany’

‘Unfortunately, it has become all-too common for some in our contemporary culture to trivialise the suffering of those who actually experienced the Holocaust by making inappropriate and insensitive comparisons. The murder of six million Jews simply for who they were is not a matter for glib analogies.’

Social media users criticised the original tweet, including one who said: ‘To compare the climate emergency with the Holocaust is shameful and wrong on every level.’

Another Twitter user added: ‘Yeah I’m on your side but this one is a bit too far. The only thing that compares to the Holocaust is the Holocaust.’

And a third tweeted: ‘Using the Holocaust analogy here is not going to do the cause any good, neither is repeatedly blocking roads over and over and over.’

At least 161 people have been involved in the roadblock protests with the Extinction Rebellion offshoot in the past two months and there have been at least 860 arrests.

And up to 32 of the group’s activists face up to two years in prison for breaching a High Court injunction by blocking traffic on motorways.

Insulate Britain is demanding that every house in Britain be insulated by 2030, and last week the anger from observers turned to mockery when the group inadvertently blocked a truckload of insulation material by sitting down in Parliament Square.

Yesterday, one of its spokesmen, Tracey Mallaghan, told Sky News of more planned protests, saying: ‘What the public needs to understand is: we will keep fighting.

‘We work on a week-by-week basis. Not one of us thought we’d get away with more than two or three weeks of this. We all, genuinely, were prepared to go to prison.’

Just over a week ago, Greta Thunberg voiced support for the tactics of Insulate Britain, saying sometimes you have to ‘p*** people off’ to protect the environment.

But their statement on the Holocaust today comes after Justin Welby was forced to apologise on Monday last week after claiming that world leaders who fail to act on climate change could be worse than those who ignored the Nazis.

In a controversial interview, the Archbishop of Canterbury suggested that politicians who shirked the task of limiting global warming would ‘allow genocide on an infinitely greater scale’ than that committed by Hitler’s regime. 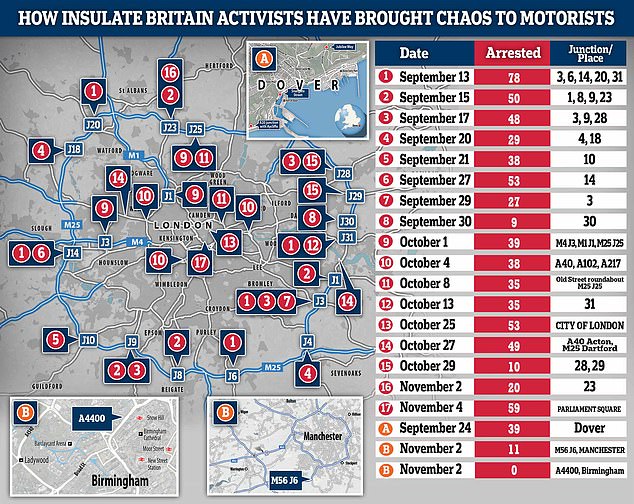 The Archbishop later issued an ‘unequivocal apology’ to Jewish people, admitting that it was ‘not right’ to make comparisons with the Nazis.

The shocking comments came during an interview with the BBC’s political editor Laura Kuenssberg in which he said that world leaders at the Cop26 summit would be ‘cursed if they don’t get this right’.

Asked about his use of the term ‘cursed’, the Archbishop said he had ‘consciously’ used the word, adding: ‘People will speak of them in far stronger terms than we speak today of the politicians of the 30s – of the politicians who ignored what was happening in Nazi Germany.

‘This will kill people all around the world for generations, and we will have no means of averting it.’ 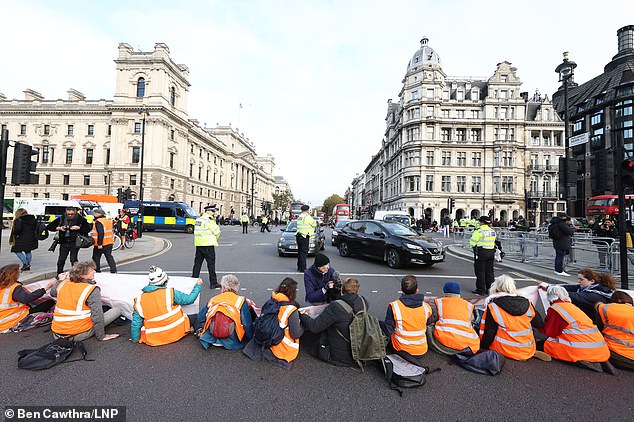 Asked whether he was saying that failing to act on climate change would be worse than ignoring Hitler and allowing genocide to happen, Archbishop Welby went further, saying: ‘It will allow a genocide on an infinitely greater scale.

‘I’m not sure there’s grades of genocide but there’s width of genocide. This will be genocide indirectly by negligence, recklessness, that will come back to us or to our children and grandchildren.’

His comments sparked a fierce backlash, with Stephen Pollard, editor of The Jewish Chronicle newspaper, saying they were ‘sickening’. ‘I simply cannot comprehend how Welby can remain as a priest, let alone Archbishop,’ he added.

Yet, in a rare public retraction, the Archbishop later issued an ‘unequivocal apology’, saying he had been trying to ’emphasise the gravity of the situation facing us at Cop26′. 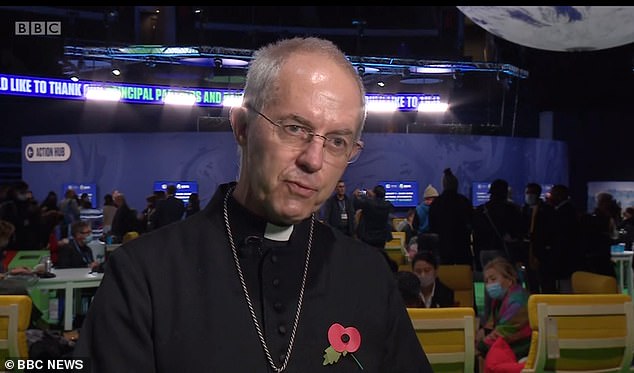 Posting on Twitter, he added: ‘It’s never right to make comparisons with the atrocities brought by the Nazis and I’m sorry for the offence caused to Jews by these words.’

Asked if the comments were appropriate, a spokesman for the Prime Minister said: ‘It is up to individuals how they choose to frame the problem.

‘I think world leaders, those attending here, understand how serious the situation is.’