Gary Lineker, Rio Ferdinand and Alan Shearer go WILD in the BBC studio at Wembley as they celebrate Raheem Sterling’s opener in England’s massive win over Germany, which books their place in the Euro 2020 quarter-finals

Gary Lineker, Rio Ferdinand and Alan Shearer certainly couldn’t hide their delight as England sealed a famous win against Germany at the Euros on Tuesday.

The Three Lions secured their spot in the Euro quarter-finals thanks to a 2-0 victory over their old rivals, with Raheem Sterling and Harry Kane both scoring in the second half at Wembley.

After a nervy first-half as England looked to exact revenge over Germany – who have haunted them down the years in the knockout stages of a major tournament – Sterling sent Wembley into bedlam in the second period after netting the opener from close range from Luke Shaw‘s low cross.

And as Sterling slotted home, Lineker, Ferdinand and Shearer were seen going beserk in the BBC studio at Wembley as England claimed the vital lead in the crunch last-16 showdown in the 75th minute.

After replays of the celebrations were shown, BBC host and former England striker Lineker joked: ‘Should know better at our age, shouldn’t we?’

The trio’s celebrations were in stark contrast to fellow pundit and former Germany international Jurgen Klinsmann, who watched on as his country fell behind.

And things only got worse at Wembley for Klinsmann and Germany, who had a golden opportunity to equalise straight after Sterling’s opener.

Goalscorer Sterling gave away the ball in a dangerous position, and Kai Havertz pounced to put Thomas Muller clean through on goal.

But with only Jordan Pickford to beat, the experienced Bayern Munich forward dragged his effort just wide of the post. 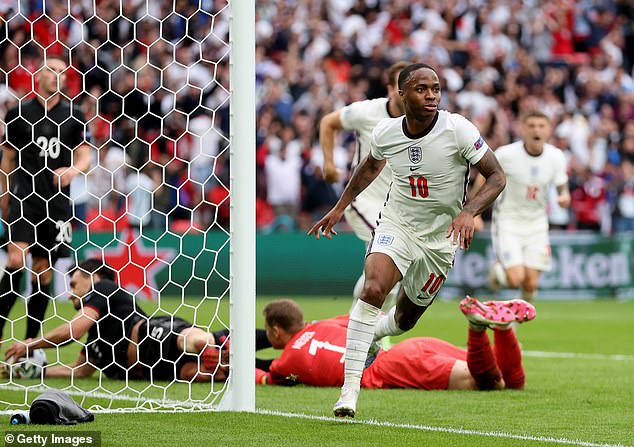 England fans breathed a massive sigh of relief and the Three Lions then punished Germany, as Kane secured the massive win in the 86th minute at Wembley.

The England captain, who has had a quiet tournament up until now, headed home from a Jack Grealish cross – leading to incredible scenes at Wembley.

England will now face Ukraine on Saturday evening in the quarter-final in Rome after they overcame Sweden at the death in extra-time at Hampden Park on Tuesday. 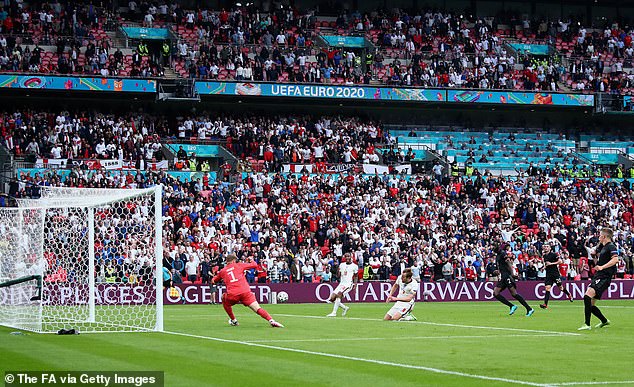