Here come the Germans: Joachim Low and his men arrive in London for their hugely anticipated last-16 Wembley showdown with old rivals England (… and they’re BOOED by schoolkids at their hotel!)

Germany stars have landed in London ahead of their Euro 2020 last-16 clash with England – and have already got a taste of what to expect at Wembley on Tuesday night after being booed by schoolchildren on their arrival.

Joachim Low‘s men were pictured boarding their flight at Nuremberg Airport on Monday afternoon and have now touched down in London.

The German team were filmed being jeered by English schoolkids as they arrived at their hotel on Monday evening. 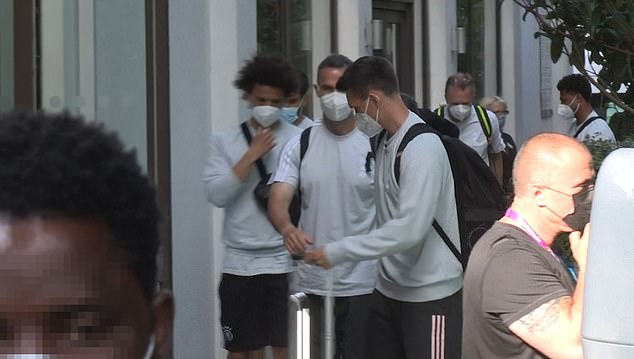 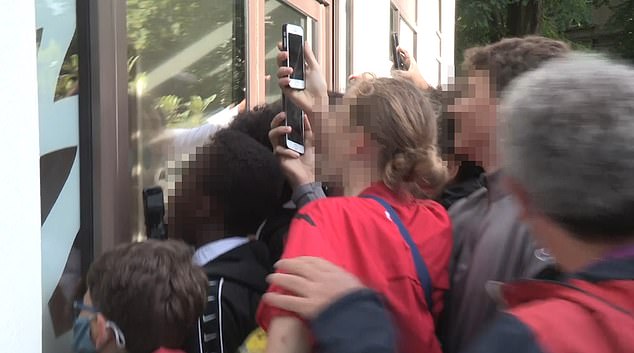 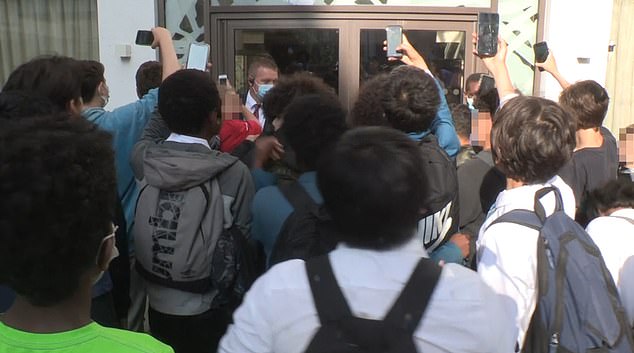 The German players looked unfazed by their reception and can expect more of the same on Tuesday night, with the majority of the 45,000 fans descending upon Wembley going to be home supporters.

Germany were initially planning to train at Wembley on Monday night but were told by UEFA they wouldn’t be able to because of the heavy rain damaging the stadium’s hallowed turf.

UEFA took the decision to protect the pitch ahead of the game itself, denying Germany the time-honoured tradition of preparing at the host stadium the night before a game.

That decision had reportedly left boss Low furious while the German media were hugely critical of UEFA, with one newspaper Bild, describing it as a ‘scandal’. 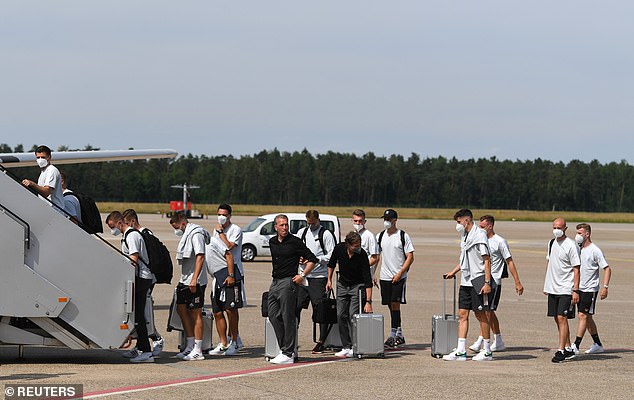 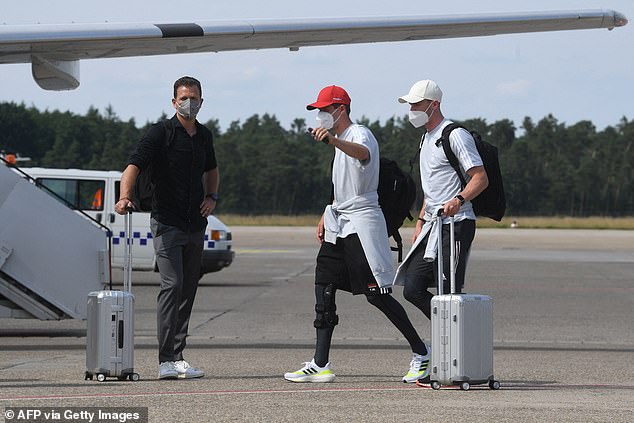 It meant that the Germany team had to apply their final preparations in Herzogenaurach this morning before flying out ahead of the last-16 match.

The stakes will be high when these old foes renew their rivalry on Tuesday, with a place in the quarter-final and a favourable tie against either Sweden or Ukraine up for grabs.

Germany were far from convincing as they squeezed through in their Group of Death and the pressure will be on England to make the most of home advantage and progress.

Gareth Southgate has already been warned by Glenn Hoddle that defeat against the Germans would mean their Euro 2020 campaign would have to be considered as a ‘failure’.

Speaking to Betfair, Hoddle, who took England to the last-16 of the World Cup in 1998, said: ‘I think it would be a failure if we don’t beat Germany. 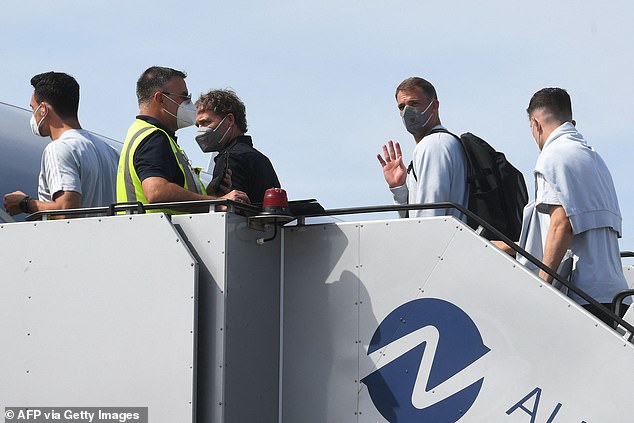 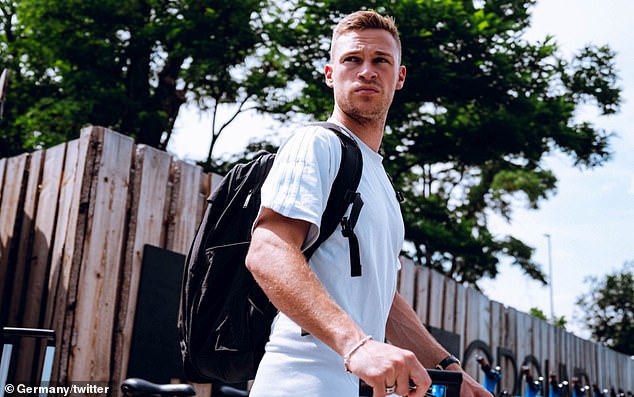 ‘The way this German side have qualified, the way they’ve just sneaked through, they’re changing the guard with a new manager coming and it’s a good time to play them.

‘We’re playing at Wembley. We can’t ask for much more. We’re slightly favourites going into this game – we haven’t conceded a goal and they conceded two against Hungary. Yes, they came back and they’ve got that German spirit. We’ve got to be shading it as favourites at this moment in time.’

Southgate is set to recall Phil Foden to his starting XI for the Wembley showdown while Mason Mount could also return despite not being able to train with the group because he is in isolation.

Mount and Ben Chilwell, who were forced into isolation after coming into close contact with Scotland’s Billy Gilmour, trained individually on Monday after requests to run socially-distanced sessions were rejected.

The two England stars are however in their final day of isolation and Chelsea man Mount is understood to be in contention to play against Germany. 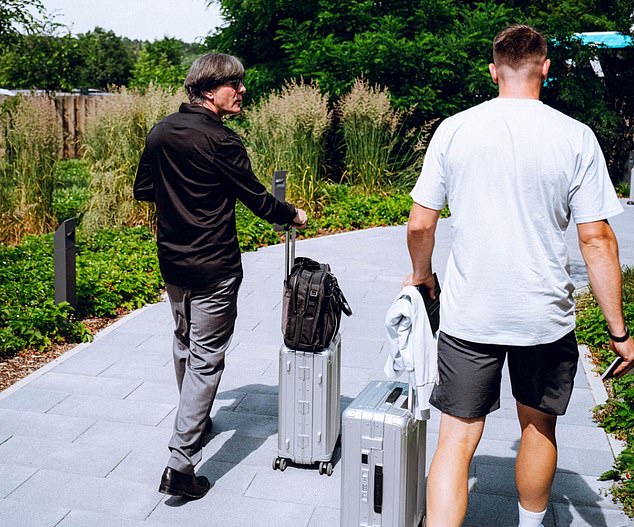 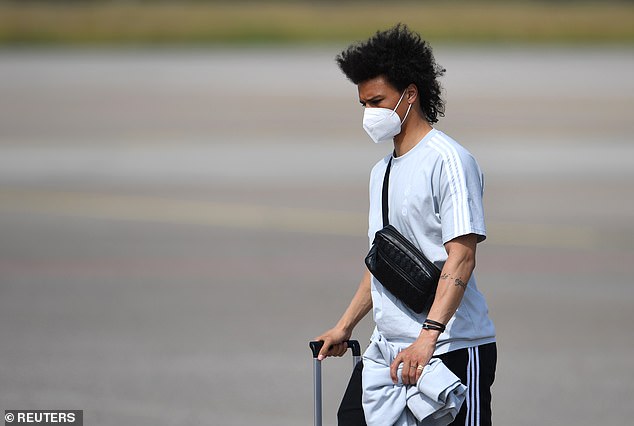 Leroy Sane is returning to England, where he spent four years playing for Manchester City

Meanwhile, it was revealed earlier on Monday that Germany are in talks to take the knee with England before the start of the match.

Southgate’s Three Lions have consistently taken a knee prior to matches in 2021 to help raise awareness for tackling racism and discrimination.

In contrast, Germany have not kneeled before games but goalkeeper Manuel Neuer has said that the issue of whether to join England in taking a knee has been discussed in the dressing room ahead of Tuesday’s knockout tie.

‘We think that’s very good from the English national team and from the teams that also do it in the Premier League,’ Neuer told German magazine Kicker.

‘We haven’t seen it in this form from the Bundesliga or our international matches. We talk about it in the team.’