‘There is no point fearing the past… we want to make history’: Marcus Rashford insists England’s fearless stars will not lose sleep ahead of their last-16 showdown with old foe Germany at Wembley next week

Marcus Rashford listened to history being relayed at St George’s Park on Thursday, of those miserable experiences at the hands of Germany in Turin, London and Bloemfontein, but was completely unflustered by it all. His reason was simple: why should England be worried by a name?

Tradition may demand that a collision with Germany be viewed with trepidation but Rashford embodies the youth and fearlessness in Gareth Southgate’s squad. No sleep will be lost ahead of a date at Wembley that has the potential to create legends. 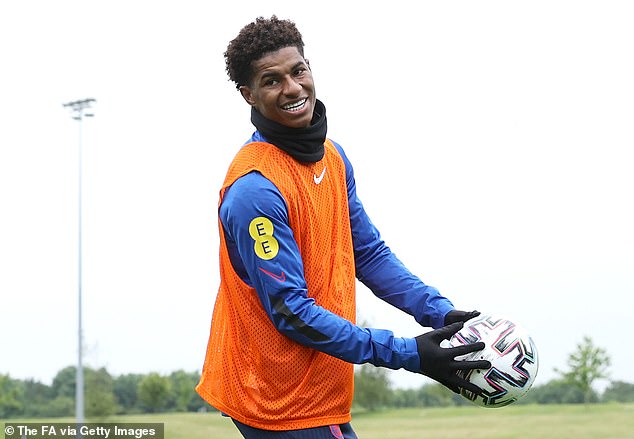 ‘We are blessed to be part of that history,’ Rashford said. ‘Our main focus is to win the game — if we do, it gets put in history. That’s how great teams are remembered.

‘There is no point fearing the past. You can’t go back and change it. What we can change is the result of the next game. It is a game with a lot of top players involved, so as players they are the ones you look forward to.

‘You want to test yourself against the best. To win the tournament, we are going to have to beat the best teams. It is as simple as that. So we have to be up for it — we have to be ready, go there and try to win the game.’

England received a visit from pop star Ed Sheeran on Wednesday evening, entertaining the squad with some of his songs over a BBQ, but it was Rashford who struck all the right notes when he discussed the possibilities this tournament now offers. 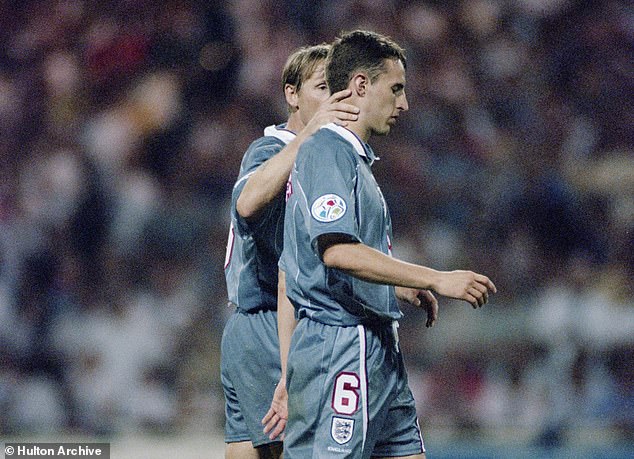 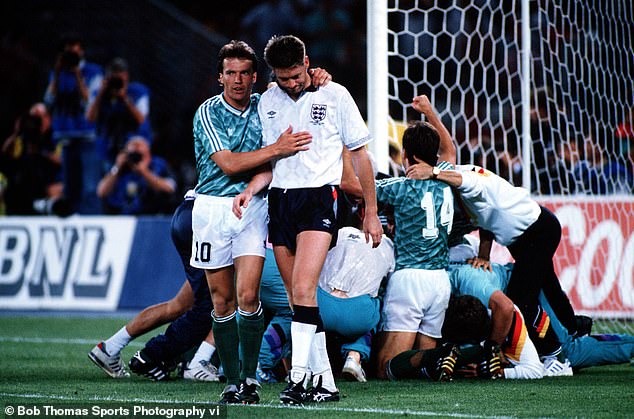 Topping Group D has created a clear path to the final and it will become even more straightforward if the Germans are dispatched. Why, then, should they be fretting about tussles that took place before many of them were even born?

The reality is they won’t be. Southgate might have his own personal story with Germany but it wasn’t mentioned at all in training on Thursday. He did not try to build it up or give it added emphasis — that is his way.

Southgate will tap into the excitement that bubbled as the squad split in half to watch Portugal’s game with France and Germany’s scrap with Hungary on separate televisions, shouting updates to each other as the last-16 foes kept changing.

‘It was a little crazy, people just shouting over who scored,’ said Rashford. ‘It was a moment for the team to sit down and relax because you are training hard every day. You very rarely get time to come away from it and just be normal people. 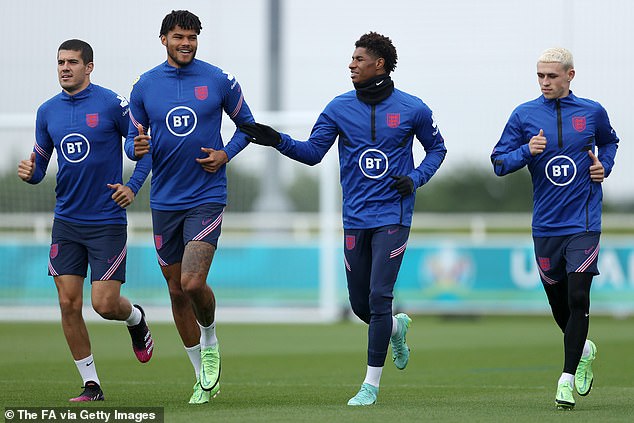 But Rashford is unflustered by it all, saying: ‘why should England be worried by a name?’

MARCUS MAY OPT FOR SHOULDER SURGERY

Marcus Rashford may miss the start of next season after revealing he is considering surgery to cure a long-standing shoulder issue.

The Manchester United striker has been managing the problem for months but was determined it would not prevent his involvement in Euro 2020. Three substitute appearances so far amount to just 58 minutes of action.

Rashford will see a consultant once England’s participation is over and, asked how long he could be out, he replied: ‘I never bothered to ask the question. I’m fully concentrated on here. When the tournament is finished I’ll ask the question. I’m not 100 per cent sure if I need it yet. I’ll just take it as it comes. I managed to get through the season with United. I think I had 36 goal involvements so I can’t look back and say “I should have taken time off to do this and do that’’. I just want to be available for every game.’

‘Germany are a top, top team but we can play against them. Over the last few years, we’ve improved against the big teams, we’ve got results. Before that, we were sometimes playing all right, but bigger teams were dominating us and the game would usually be one or two-nil to them. That was one thing Gareth wanted to change.

‘It was around the Nations League time (in 2018); we wanted to start pushing ourselves and trying to beat these big nations. Gradually we started to do it a few more times. We’ve definitely progressed in those terms. Like I said, I’m just looking forward to the next game.’

They all are. Rashford has played against Germany twice, both times as a substitute in his 44 England appearances, but is yet to experience a win or score against them.

There would no better place to change those statistics than in the capital in four days’ time.

‘I feel like we have to bring the best version of us and take that to the game,’ said Rashford, who will have no hesitation in taking a penalty if a shootout is required.

‘We want to win the England way — show some good football, work hard for each other and score and create goals.

‘When we have been at our best, it is when we have been both scoring goals and keeping clean sheets. I know it sounds basic — don’t concede and score goals — but that is what we are good at.

‘It is right that everyone (outside camp) is getting excited. We will be focused and hopefully be at our best.’