Thomas Muller misses HUGE opportunity to equalise for Germany just minutes after Raheem Sterling’s opener in Euro 2020 clash with England… as Jurgen Klinsmann admits: ‘He knows he should have scored’

Germany striker Thomas Muller was left to rue a huge missed opportunity in the closing stages of their Euro 2020 defeat by England on Tuesday night.

The Bayern Munich veteran had a glorious chance to bring Joachim Low‘s side back into the game at Wembley after Raheem Sterling had given the Three Lions the lead just minutes before.

Germany should have been level soon afterwards when Sterling presented the ball to Chelsea midfielder Kai Havertz, who passed to Muller, only for him to shoot narrowly wide. 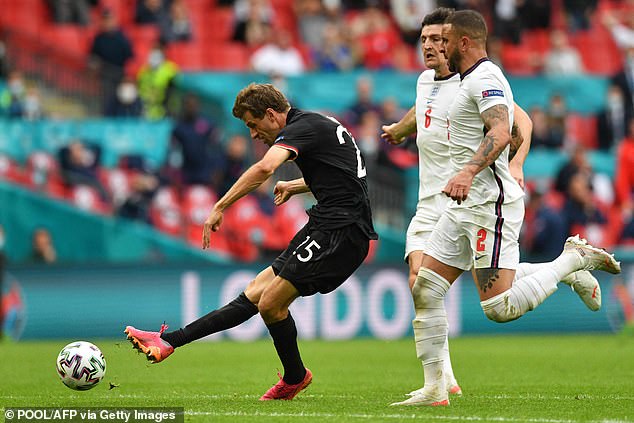 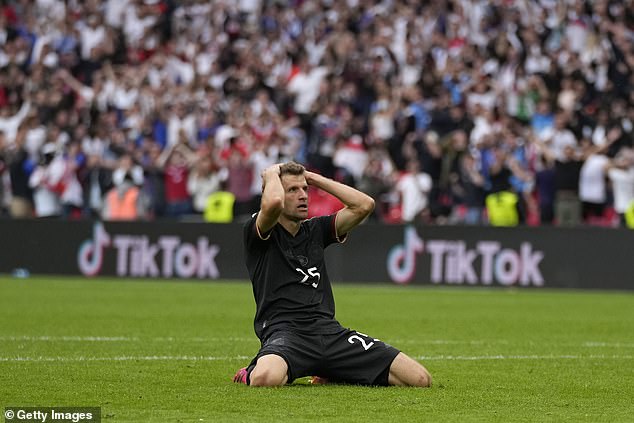 England goalkeeper Jordan Pickford charged forward to meet Muller, succeeding in forcing him to drag his effort wide of the post.

Things went from bad to worse for Muller moments later when Harry Kane went on to score a second goal for England to secure their place in the quarter-finals of Euro 2020.

Speaking on the BBC, former Germany player and manager Jurgen Klinsmann was critical of Muller, who scored twice against England in their 2010 World Cup exit, for missing the chance.

He said: ‘You wanted it to be Muller.

‘He’s the guy who carried Germany through difficult times. He missed it, he knows he should’ve scored that one.

Football fans were also both surprised and dismayed that Muller, who has scored 39 goals in 106 caps for Germany, missed the chance.

@db_writing agreed, commenting: ‘That Muller missed chance went against everything I’ve ever learned about football over the past 30+ years.’

Another fan was hugely complimentary about Pickford’s role in denying the German forward.

@HLTCO tweeted: ‘I love Jordan Pickford you know. The bloke is just one of us. His reaction when Muller missed that one on one was incredible.’