The family of a young expectant couple who were mowed down as they walked their dogs have only an unfinished baby blanket to remember them by.

Kate Leadbetter, 31, and her partner Matthew Field, 37, were about to become parents for the first time, to a son they named Miles, when they were run over in Alexandra Hills in eastern Brisbane on Australia Day.

They were allegedly hit by a 17-year-old driver of a stolen Land Cruiser who was high on drugs, on bail for 50 other charges, and rammed another car hours before.

He has been charged with murder and several other crimes. 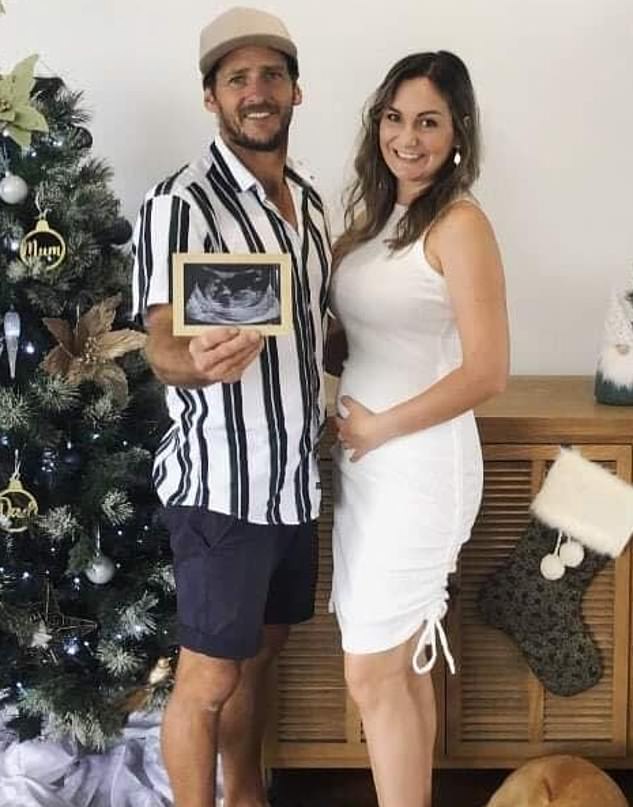 Kate Leadbetter, 31, (right) and her partner Matthew Field, 37, (left) were six months pregnant with their first child when they were tragically killed in a hit-and-run in Brisbane on Australia Day

Kate’s mother Jeannie and stepfather Tom Ricter said Miles would have been their first grandchild when he was born in May.

Although it sits waiting for a child that will never come, a tiny crocheted baby blanket with only one row left until completion has offered the family hope amid their darkness.

Through tears, Jeannie vowed to finish the blanket in honour of her grandson.

‘I haven’t gotten back to it, but I will. I will do it,’ Jeanie told the Courier Mail.

Since January 26, the grieving parents’ lives have been completely changed.

Although they continue to do the things they have always done, everything has a ‘hollow ring to it’ and they just ‘go through the motions’.

Jeannie and Kate were eagerly anticipating the arrival of Miles, and joked about the size of the unborn bub during the pregnancy.

Once he reached the size of an eggplant, they started calling him baba ganoush. 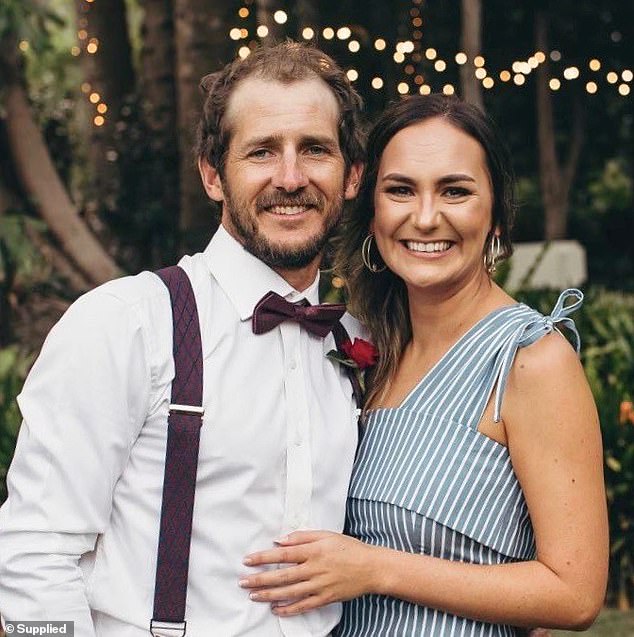 Jeannie said at Christmas, just a month before their deaths, Katie remarked how big the family would be the following year once their fifth member arrived.

She thought she had reached the age where her biggest worry would be looking after a newborn again.

‘I should be like, “wow, now is five weeks ’til the baby is born… I should be worrying if I’m capable of looking after a newborn overnight, or if I’ve lost the skill”. I thought (that’s what) I’d be worrying about right now,’ she said.

‘We had the best life. We were just sweet, it was all good. And then in the space of thirty seconds it just stopped… We had a great kid and she had a great partner and we finally had that cool bit of playing with “grandies” to look forward to.’

Mr Richter recalled how pleased the couple looked when they revealed they were pregnant.

He said they came over and Jeannie opened a bottle of wine, but Katie turned it down before telling them the news, with the four bursting into tears. 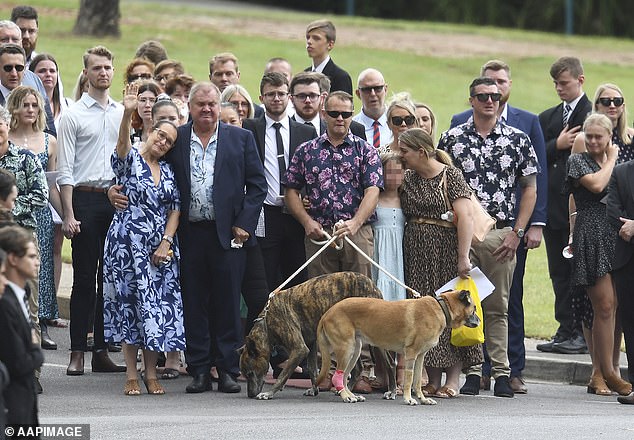 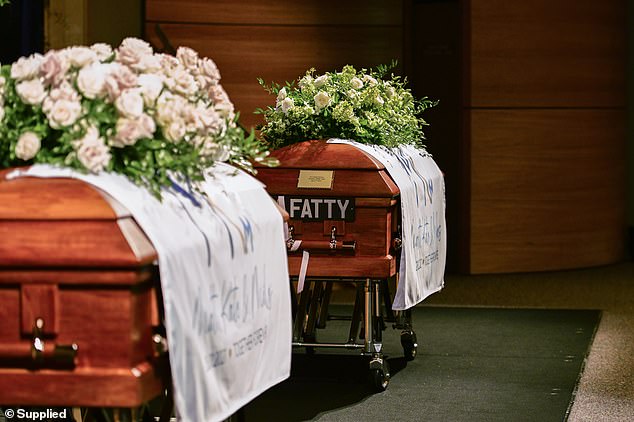 But just months later, their world would be completely shattered began when local Sunshine police officers knocked on their door.

They were immediately in ‘disbelief’ that they could be gone because the odds of what happened were ‘infinitely small’.

Mr Richter said the fact the dogs are still alive showed how it was just a matter of seconds difference between them surviving or not.

On Wednesday, he will release a song titled ‘Three Hearts’ to remember their loved ones who were tragically killed. There is a verse each dedicated to Kate, Matt and Miles.

Mr Richter said there were constant reminders Kate and Matty were gone, and Jeannie said she found it hard to think about anything else. 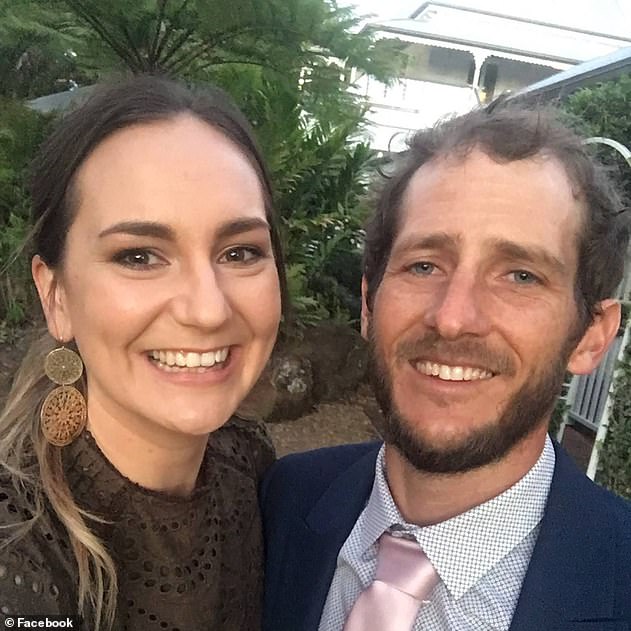 However, he said the whole extended family pulled together to support each other, along with friends near and far.

Kate and Matt both died at the scene on Finucane Road in Alexandra Hills and the teen allegedly fled before stealing a set of keys from a nearby house.

It will be alleged the boy deliberately collided with another car at the same intersection shortly before the couple were killed.

Proceeds from download sales of Three Hearts will go towards Kate’s memorial, and donations to Queensland Homicide Victims Support Group are encouraged. 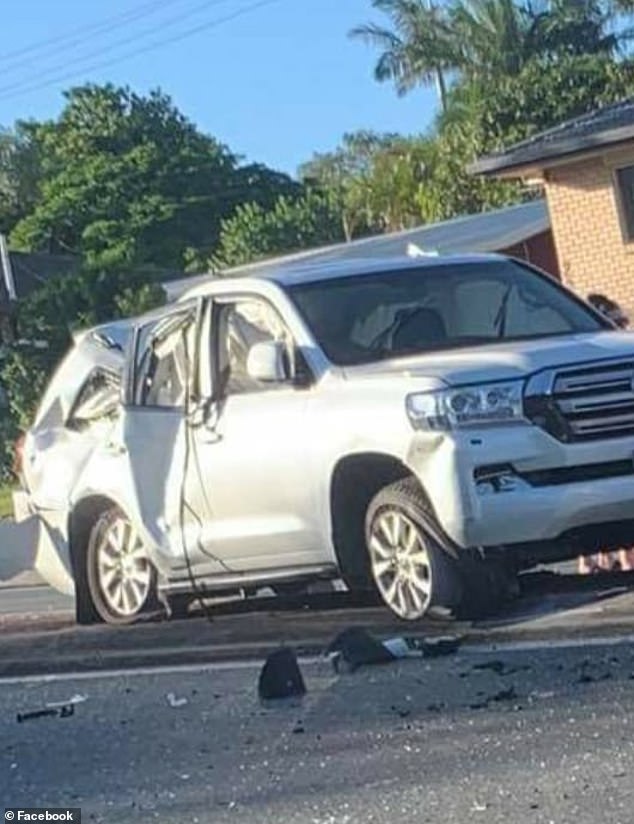