EA Sports have released another batch of FIFA 19 Ultimate Team ratings ahead of the game’s release on September 28 for PlayStation 4, Xbox One, PC and Nintendo Switch.

This time we have numbers 20-11 so we can see who just missed out on the prestigious top 10. We’ve finally been given our first glimpse of players rated 90 and above but there’s a few high profile players who didn’t quite reach that landmark.

That includes Tottenham’s Harry Kane, Manchester City’s Sergio Aguero and and Atletico Madrid‘s Antoine Griezmann who all have an overall of 89 in FIFA 19. 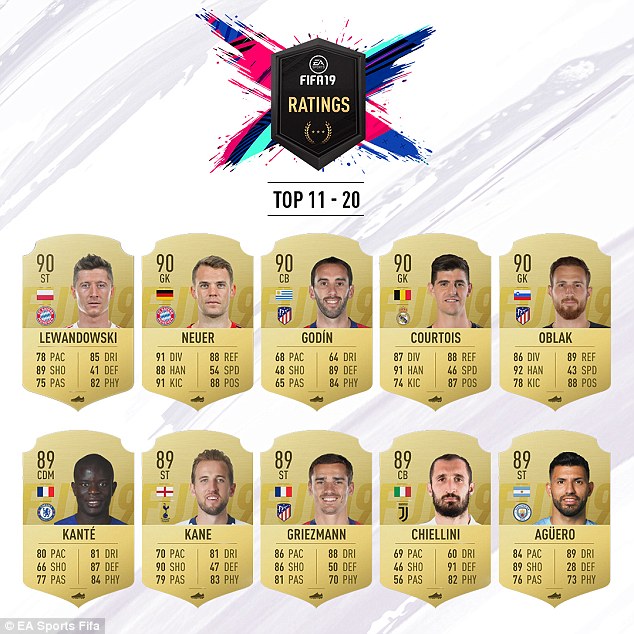 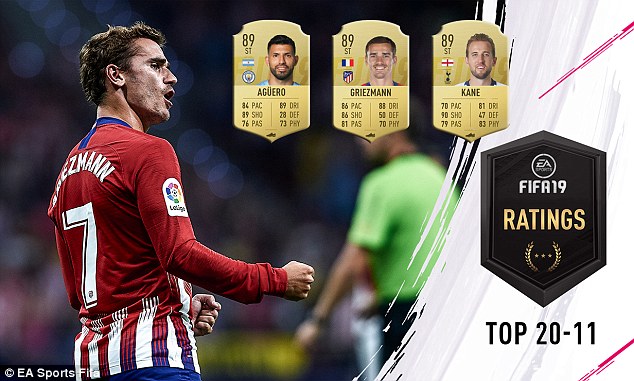 Griezmann, Kane and Aguero are all in the top 20 but didn’t quite manage overalls of 90

While Diego Simeone reckons Griezmann has been the best player in the world over the last year, EA are on a different page – leaving him out of the 90 ratings. They still upgraded him by one though and his card looks lethal with 86 pace, 88 dribbling, 86 shooting and 81 passing.

Kane just missed out on the Premier League Golden Boot last year to Mohammed Salah but he has beaten the Egyptian’s FIFA rating of 88.

After a strong season which included the World Cup Golden Boot, Kane has been upgraded from his 86 rating in FIFA 18. The impressive card sports 70 pace, 81 dribbling, 90 shooting, 79 passing and 83 physicality.

Meanwhile Aguero’s overall has stayed the same from last year, although his pace has been downgraded. He now has 84 pace as well s 89 dribbling, 89 shooting, 76 passing and 73 physicality.

Chelsea’s N’golo Kante makes sure the top 20 players list is even more stacked with an upgrade from 87 to 89. The World Cup winner now has 80 pace, 81 dribbling, 66 shooting, 87 defending, 77 passing and 84 physicality.

As for the 90 ratings, three goalkeepers have been included by EA – Thibaut Courtois, Jan Oblak and Manuel Neuer. Courtois has been given a small upgrade of one after joining Real Madrid while Neuer has been downgraded by two following his injury problems.