EA Sports are continuing their countdown of the top 100 players in FIFA 19 with more Ultimate Team rating reveals. This time we’re looking at players 80-61 and there’s even more controversy this time around.

While numbers 100-81 left fans upset over a few players having their pace downgraded, this time FIFA fans have been left fuming over some players’ downgrades and upgrades.

Liverpool fans were initially delighted to see Virgil Van Dijk had been upgraded up to an 85 but after seeing other Premier League defenders bumped up to 86s, many Reds fans are livid that the imposing Dutchman didn’t get more. 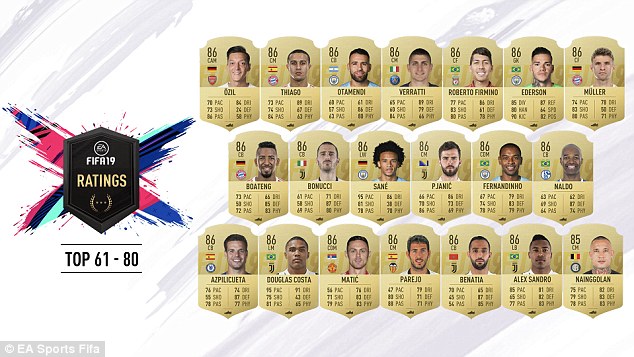 The one upgrade that really left a sour taste in many Premier League fans’ mouths is Nicolas Otamendi. The Manchester City defender is one rating above VVD with an overall of 86.

He boasts impressive stats with 60 pace, 86 defending and 80 physicality. However, if you add up all their stats VVD is the better player with higher pace, dribbling, shooting, passing and physicality.

Meanwhile Otamendi’s teammate Leroy Sane has received a massive upgrade, going up from an 84 to an 86. The impressive winger has 95 pace, 86 dribbling, 81 shooting, 78 passing and 70 physicality.

Another impressive winger who’s received a big upgrade is Juventus’ Douglas Costa. Cristiano Ronaldo will have a field day upfront where paired with the 86-rated winger who has 95 pace, 91 dribbling, 75 shooting, 81 passing and five-star skills.

Back to the Premier League and there are few other Brazilians who have impressed. Ederson is now an 86 with 85 diving, 87 reflexes, 80 handling, 90 kicking and 82 positioning. Meanwhile Firmino is also now an 86 with 77 pace, 86 dribbling, 83 shooting, 80 passing and 78 physicality.

It’s not all good news for the Premier League though as one of its biggest names has been handed a huge downgrade. Arsenal’s Mesut Ozil has gone down from an 88 to an 86 with 70 pace, 84 dribbling, 73 shooting,86 passing and 58 physicality.