It’s a strange time for football fans at the moment, the World Cup has come to an end while there’s still a few more weeks until the Premier League returns, leaving many of us in limbo.

One of the best ways to get your football fix during these weeks is playing FIFA 18 and you might be able to add some serious upgrades to your Ultimate Team without breaking the bank thanks to a recent update.

EA Sports have confirmed that the cards from the Halloween promotion ‘Ultimate Scream’ are keeping their stat boosts permanently, making some cards an absolute bargain. 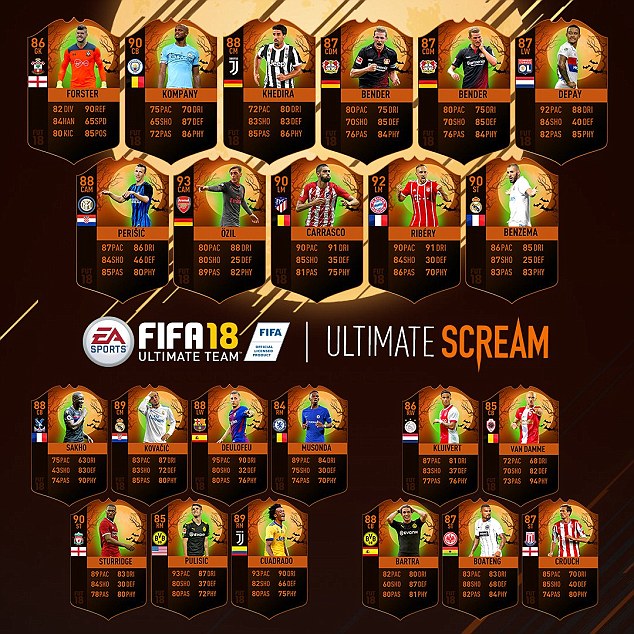 EA have made the stat boosts to all 23 Ultimate Scream cards permanent, resulting in bargains

The spooky orange and black cards are slightly upgraded versions of players’ base cards which EA then choose to give massive stat boosts too during Halloween and other certain events.

These have always only lasted for a short time, meaning FIFA players were reluctant to invest to much money into these on the market.

But now knowing these stats will stay, all 23 of the Ultimate Scream cards are well-worth picking up – especially at their ridiculous prices.

The highest rated of the lot is Arsenal’s Mesut Ozil, who with the boost goes from an 89 to a 93. The card is superb considering it only costs around 71,000 coins with 80 pace, 88 dribbling, 80 shooting, 89 passing and 82 physicality.

Franck Ribery’s card is just as impressive with 92-rated card selling for just 65k. He will absolutely terrorise defenders too with 90 pace, 91 dribbling, 84 shooting, 86 passing and five-star skills.

However, one of the best bargains is probably Daniel Sturridge’s 90-rated card which sells for s little as 30k. The card, which still has him as a Liverpool player, features 89 pace, 83 dribbling, 84 shooting, 78 passing and 80 physicality.

Another card which may go under the radar is Marc Bartra’s 88-rated card. The centre-back is incredibly quick for someone in his position with 82 pace and is just as accomplished in other areas with 80 dribbling, 87 defending, 80 passing and 81 physicality. All for as little as 17.5k coins, which would usually get you an inform card in the 80s with no particularly great stats..