The time has finally come as EA Sports have given us a first look at the official Ultimate Team ratings for FIFA 19 with a selection of the top 100 players.

Numbers 100-81 of that list have been revealed and there has already been a fair bit of controversy from Arturo Vidal’s pace to Marco Reus’ overall.

EA poked fun at the controversial nature of the rating announcements with a promotional video of footballers including Kevin De Bruyne, Cristiano Ronaldo and Neymar Jr. Alexandre Lacazette even bins his card in anger that he is slower than teammate Pierre-Emerick Aubameyang. 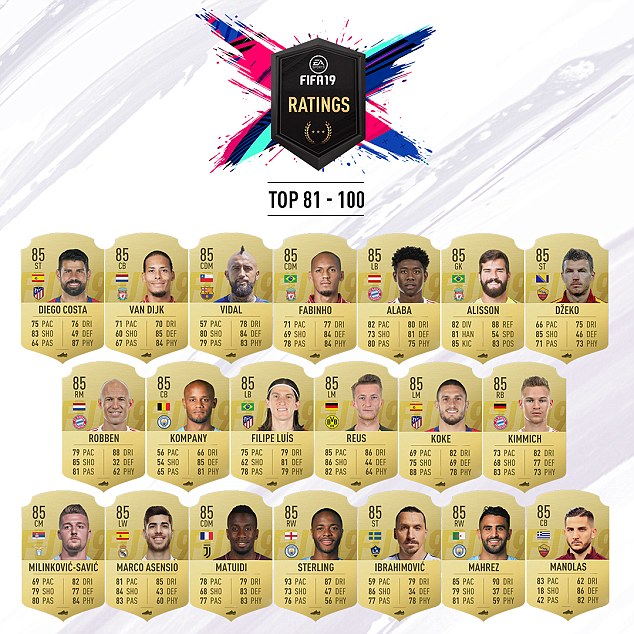 Every player within the 100-81 places has an overall of 85. Coming in first at number 100 is Roma centre-back Kostas Manolas.

The Greek international has been bumped up one overall and will once again be a popular amongst FIFA players with big pace upgrade up to 83. Other stats are just as stellar with 86 defending and 83 physicality.

Meanwhile someone who will be much less happy with their pace is Barcelona’s Vidal.  Not only has he been downgraded from an 87 overall but his pace has taken a massive hit, going down from 75 to 57.

Meanwhile his former teammate at Bayern Munich, Arjen Robben, has suffered a similar fate as he has fallen down from an 88 overall and has had his pace downgraded from 86 to 79. The rest of his stats are still pretty good though with 88 dribbling, 85 shooting and 81 passing.

Another big downgrade is Zlatan Ibrahimovic who has fallen from an 88 overall. Still, his 85 rating is pretty high for the MLS and he has had his skill moves upgraded back to five-stars. His 59 pace is far from great but his 86 shooting means he will still be lethal.

As for the Premier League, Liverpool goalkeeper Alisson has had a massive upgrade of five overall with all of his stats going up. The Brazilian now has 82 diving, 88 reflexes, 81 handling, 85 kicking and 83 positioning.

If your name is Kim Hunter, you can get a FREE copy of FIFA 19 #englishheadline #Kim #Hunter #FREE #copy #FIFA