New footage has emerged of the moment a £100million F-35 fighter jet crashed into into the Mediterranean while taking off.

The pilot was able to eject safely from the jet, part of 617 squadron, before it crashed during the operation on the HMS Queen Elizabeth on November 17.

The video shows the pilot eject just as the high-tech jet topples slowly over the runway onboard the aircraft carrier.

The F-35 then disappears and the pilot’s parachute can be seen floating toward the sea seconds later.

After he ejected, the pilot was reportedly left dangling from the edge of the HMS Queen Elizabeth because the lines of his parachute became caught on the edge of the flight deck. 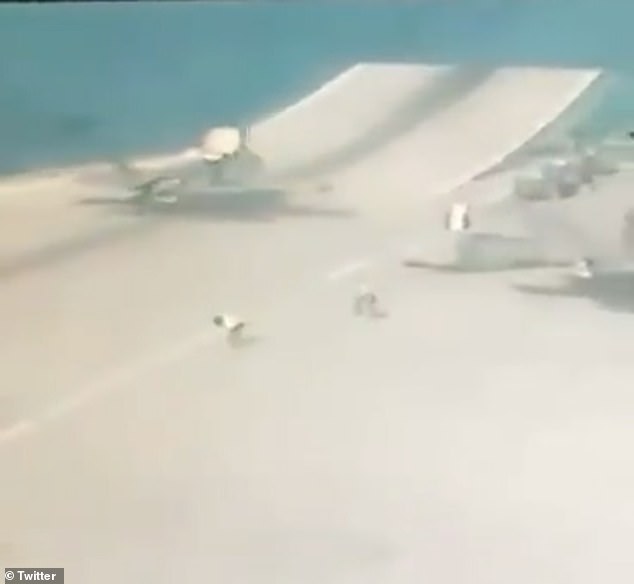 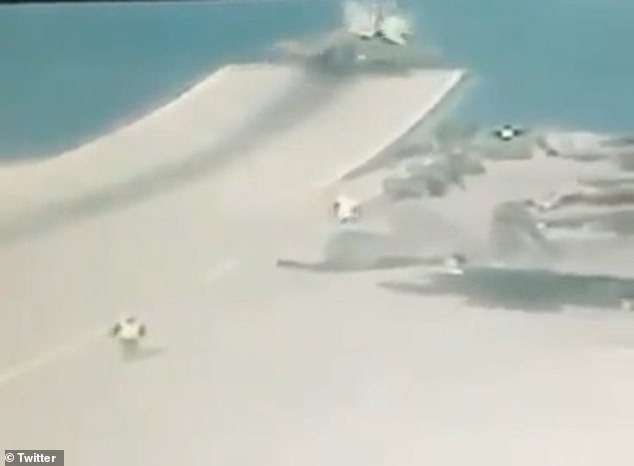 It is understood he was rescued by helicopter and suffered minor injuries as a result of the incident.

An MoD spokesperson said: ‘We are aware of a video circulating online. It is too soon to comment on the potential causes of this incident.

‘The recovery efforts are ongoing and the Defence Accident Investigation Branch will report back their preliminary findings in due course.’

The footage was shared by defence commentator Seb Haggart, believed to be a former member of the Royal Navy, who posted the video on his Twitter page earlier today.

It is unclear how the footage, which appears to have come from a surveillance camera onboard the aircraft carrier, ended up being shared publicly and the MoD were unable to comment when asked.

In the days following the crash, reports suggested it may have been caused because a rain cover had not been properly removed prior to take-off.

Officials believe the rain cover was sucked into the F-35B Lightning II stealth plane’s engine as it took off from the flight deck of the UK’s flagship aircraft carrier.

Sources told the Sun the RAF pilot realised the issue and tried to abort take-off but was unable to stop the plane before the end of the ship’s runway.

They said naval personnel realised the issue ‘almost right away’ because rules around removing covers and engine blanks before flights are ‘incredibly strict’.

The video shows the jet slowly approach the end of the runway before it topples over and prompted concerns over whether the jet hit the aircraft carrier on the way down before it landed in the sea.

It is unclear if the lack of thrust from the jet as it approaches the end of the runway is due to a technical malfunction which contributed to the crash or because the pilot attempted to abort take-off seconds before he ejected.

Commander Tom Sharpe, a former Royal Navy officer told Sky News: ‘Given how close the aircraft ditched to the bow, and the speed of the ship on launch, the likelihood of it hitting the bow of the ship (under the waterline) would be quite high. 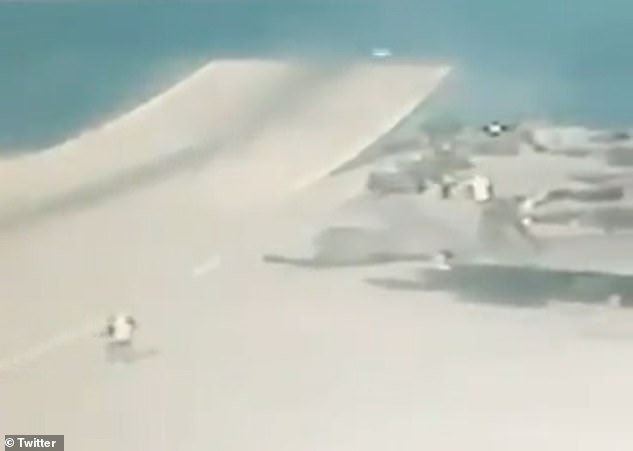 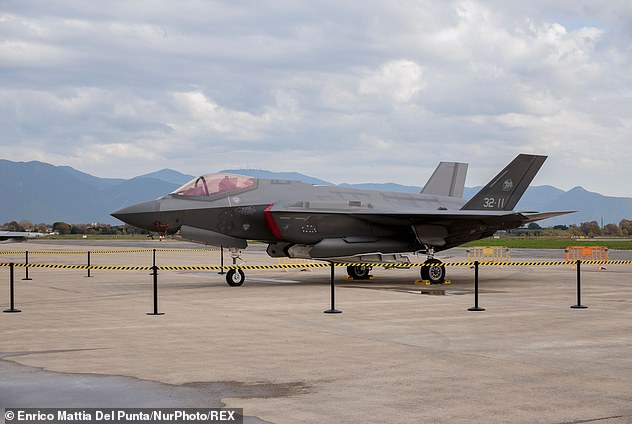 Officials believe the rain cover was sucked into the F-35B Lightning II (pictured) stealth plane’s engine as it took off from the flight deck of the HMS Queen Elizabeth, forcing the pilot to eject 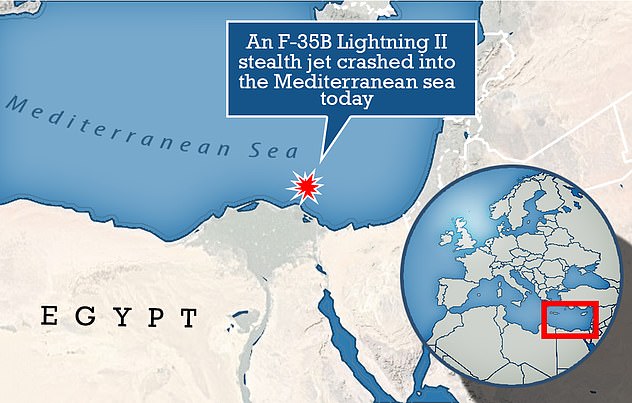 ‘Warship steel is not that thick so, even despite the weight discrepancy between the two, I would want the compartments near the bow checked immediately… I would then want the hull dived on at the first opportunity, just to be sure.’

It is understood the UK is now working with the US on a mission to recover the wreckage which is believed to be more than a mile below the surface amid fears Russia would try to salvage what’s left of the plane to examine the tech onboard.

The incident is the first mishap for the RAF’s F-35B fleet and for the £3billion aircraft carrier which left the UK seven months ago.

The technology onboard the US-designed aircraft, including top secret radar and sensors, is hugely sensitive as it allows the F-35 to fly ‘unseen’ in hostile territory at supersonic speeds.

Royal Navy servicemen are working with the Americans to recover the F-35B Lightning II from more than a mile below the surface.

The operation, shrouded in secrecy, is understood to involve divers, miniature submarines and inflatable bags which may be used to lift the plane to the surface of the Mediterranean. 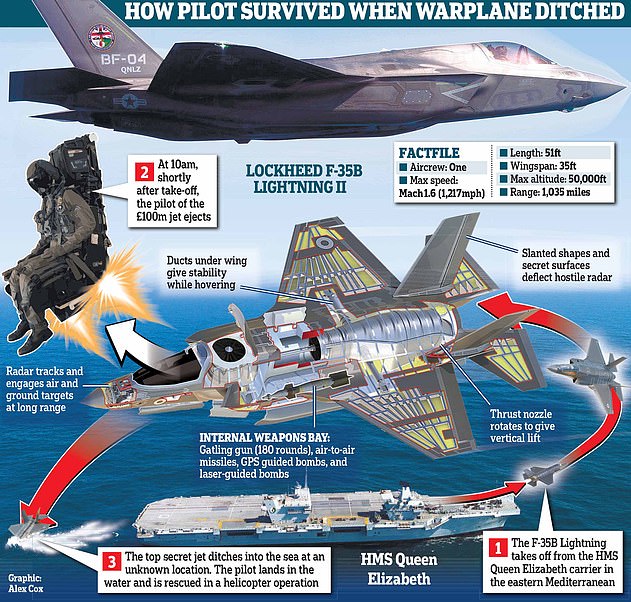 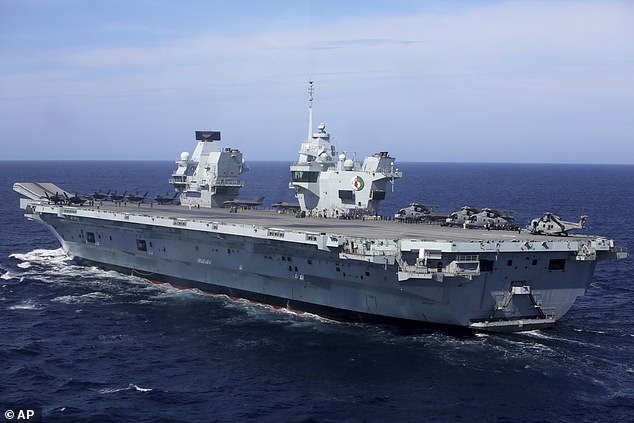 The crash triggered a scramble to recover the next-generation jet from the sea before it could be reached by foreign powers, particularly Russia. Above: File image of HMS Queen Elizabeth

The US is anxious that the jet’s top secret technology is not salvaged by Russia or any of its allies as they would want to study the stealth technology closely to find a way of defeating the jet.

The Lightning is described by the RAF as a fifth generation combat aircraft capable of conducting air-to-surface strikes and electronic warfare.

The aircraft uses an array of sensors to operate undetected in enemy airspace. There were understood to be not only eight British F-35s aboard HMS Queen Elizabeth but also ten US aircraft.

They have conducted some 2,000 take-offs and landings without incident. When not deployed on the carrier, the UK’s F-35Bs are stationed at RAF Marham in Norfolk as part of 617 Squadron (the ‘Dambusters’).

A Ministry of Defence spokesman said on the day of the crash: ‘A British F35 pilot from HMS Queen Elizabeth ejected during routine flying operations in the Mediterranean this morning.

‘The pilot has been safely returned to the ship and an investigation has begun, so it would be inappropriate to comment further at this time.’

F-35: How the planes serving HMS Elizabeth have been plagued with problems

The delivery of the RAF’s new, US-built F-35B Lightning II Joint Strike Fighter in July 2021  marked a rare moment of celebration in what has been a troubled project.

The ‘fifth generation’ fighter aircraft is the world’s most expensive weapons system, though costs have finally stabilised at an eye-watering $406billion.

Manufacturer Lockheed-Martin agreed to cap costs after US President Donald Trump critised the project and even tweeted support for a rival aircraft.

Britain is currently embarked on a £9.1billion programme to purchase 48 of the F-35s, from American aviation giant Lockheed Martin, by 2025.

One of the first four F-35B Lightning II aircraft arrives at RAF Marham in Norfolk on June 6, 2018

America enticed its Nato and other allies into sharing the cost of the aircraft by offering input into manufacture and 15 per cent of each one is comprised of parts from British companies while some of the jets will be made in Italy.

But the planes have been plagued by a catalogue of problems which have sent costs soaring.

There are fears about shortcomings in the technical systems underpinning the new generation of war planes will leave them unable to function properly.

The true cost of the British planes delivered this year is estimated to be over £150million each to cover ‘extras’ such as software upgrades and spare parts.

There are also concerns plane’s software system is vulnerable to cyber-attack and cannot be tested independently by the UK.

The problems are not helped by the department responsible for the computer networks essential to the aircraft’s operation needs to find savings of £400 million this year.

The reports into the costs and other problems prompted the Defence Select Committee to launch an inquiry into the project.

It reprimanded the Ministry of Defence for keeping parliament and the public in the dark about the costs.

The MoD has so far refused to provide the estimated cost to the UK of buying the F-35, beyond referring to a National Audit Office which used the £9.1billion figure.

MPs said ‘it is simply not acceptable for the MoD to refuse to disclose to parliament and the public its estimates for the total cost of the programme’.

Though the cost of the F-35 has been the focus of attention, there have also been embarrassing reports of operational shortcomings emerging from the United States.

In a mock air battle in 2015, the cutting edge plane was defeated by an older generation F-16, a plane designed in the 1970s.

Overheating, premature wear of components in the vertical tails and vulnerability to fire were also found to be issues.

The US Air Force temporarily grounded dozens its F-35 stealth fighters while it investigated an oxygen supply issue.

The Marine Corps, who also operate the same F-35B model the UK has purchased, was forced to ground its planes after flaws were found in the  computer system.