June 25, 2022 0 comment
Home world Frail Pope is helped to his feet at weekly audience and is pushed around in a wheelchair #Breakingnews
world

A frail Pope Francis had to be helped to his feet at his weekly audience today – days after speculation swirled over whether he was planning to resign.

Rumours that the 85-year-old may resign began after he postponed a trip to Africa and announced an unusual meeting of cardinals.

Pictured at his weekly general audience at the Vatican today, the Argentinian spoke about how old age is ‘a time to find strength in frailty’ and encouraged the elderly to embrace their frailty and helplessness.

He looked to be in visible discomfort while getting in and out of his chair and was accompanied by two aides.

Pope Francis was still able to give his weekly talk and greet the audience and also spoke about victims of the devastating earthquake in Afghanistan and violence in Mexico. 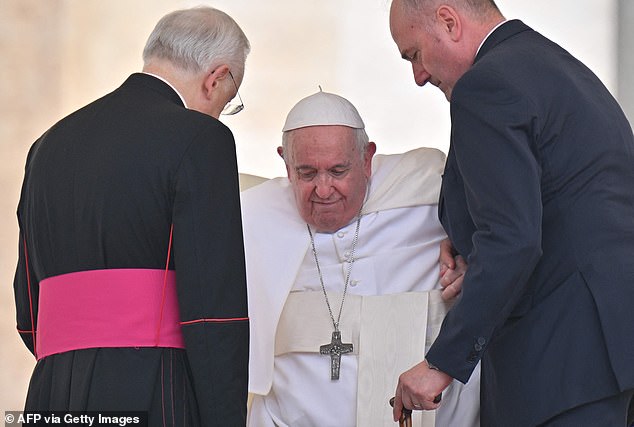 Pope Francis (pictured today) has continued to fuel speculation that he could resign from his role, as he continues to struggle with mobility and walking 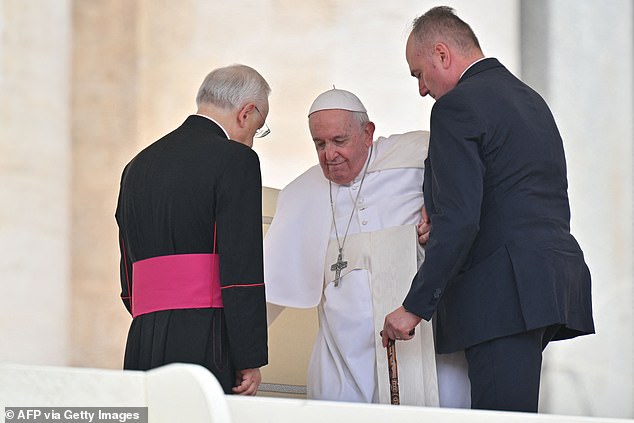 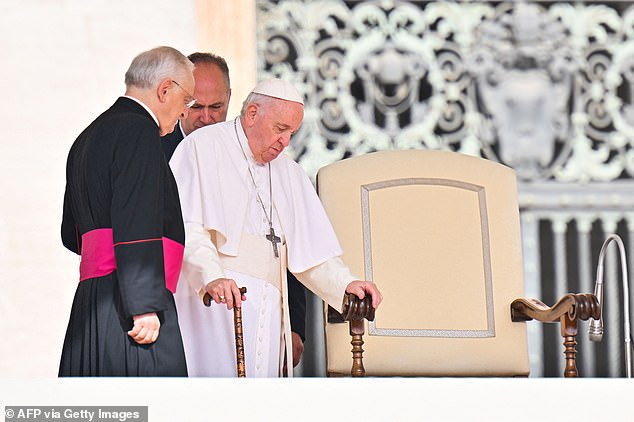 In his weekly general audience the Pontiff discussed old age, telling the elderly to embrace their frailty and helplessness in order to bring them closer to Christ 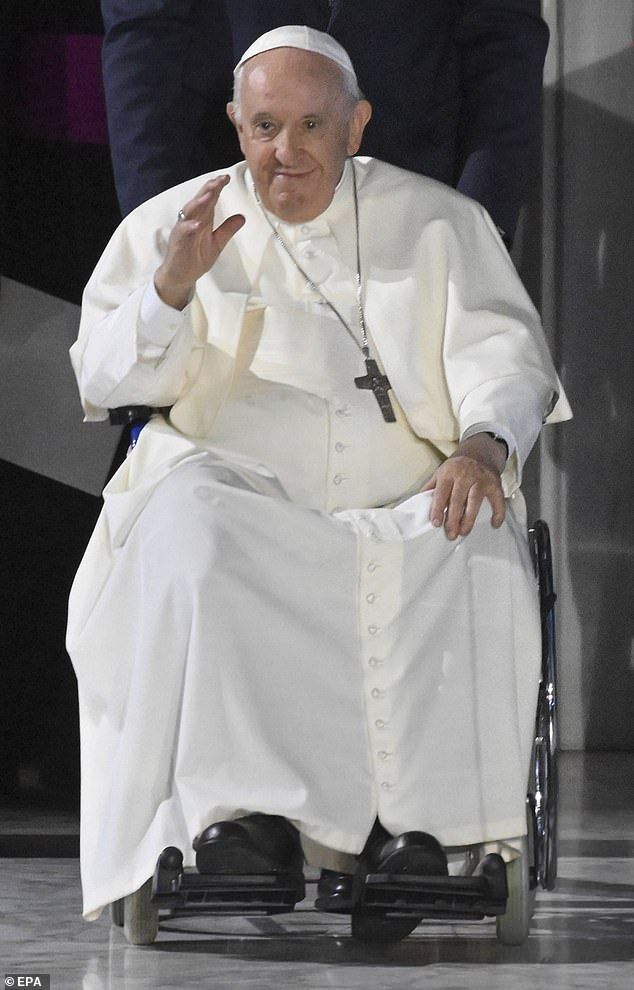 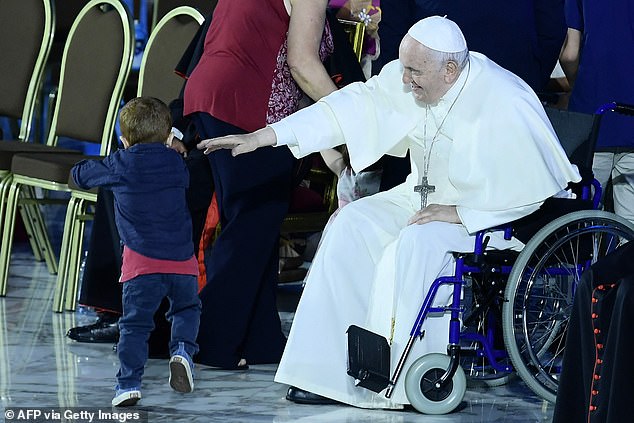 Pope Francis, seated in a wheelchair following knee treatment, reaches out to a two-year-old child playing onstage during an audience as part of the Festival of Families 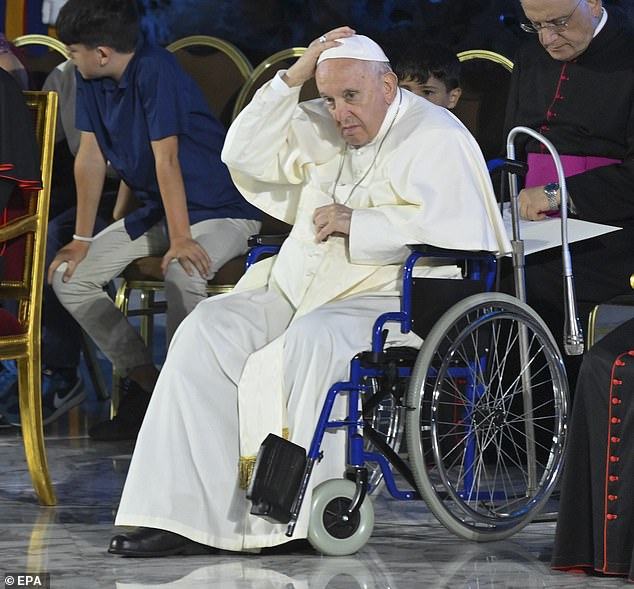 Pope Francis sits in a wheelchair as he attends the Festival of Families in the Paolo VI Hall on the first day of the 10th World Meeting of Families in Vatican City, 22 June 2022 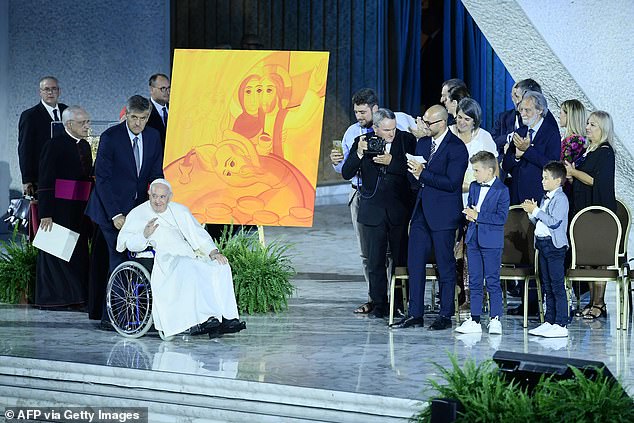 Hobbled by pain in his knee and forced to use a wheelchair in recent weeks, the pontiff postponed a July trip to the Democratic Republic of Congo and South Sudan last week.

He also announced an unusual decision to hold a consistory to name new cardinals during a Vatican vacation month and arranged meetings to ensure his reforms stay intact.

The extraordinary consistory will be held on August 27, a slow summer month at the Catholic headquarters, to create 21 new cardinals – 16 of whom will be under the age of 80, thereby eligible to elect his successor in a future conclave.

Since becoming pope in 2013, the Argentine pontiff has created 83 cardinals in a move to shape the future of the Catholic Church, in part to counter Europe’s historically dominant influence, and to reflect his values.

On August 28, Francis will then pay a visit to L’Aquila and the tomb of Celestine V – the first pope to have resigned from the papacy, in the 13th century.

He then joins the world’s cardinals – many of them meeting their peers for the first time – in two days of discussions over the reform of the Roman Curia, which Francis announced in March with the unveiling of a new constitution.

Francis’ shake-up of the Roman Curia attempts to shift the Church back towards its pastoral roots, allows lay Catholics to head Vatican departments and creates a dicastery specifically for charity works among other reforms.

The moves have triggered intense speculation about his plans for the future, including the most radical – that he was planning to step down.

The resignation of a pope was once almost unthinkable until Benedict XVI renounced his reign in 2013, citing his declining physical and mental health.

In 2014, a year after being elected to replace Benedict, Francis himself told reporters that were his health to impede his functions as pope, he would consider stepping down too. 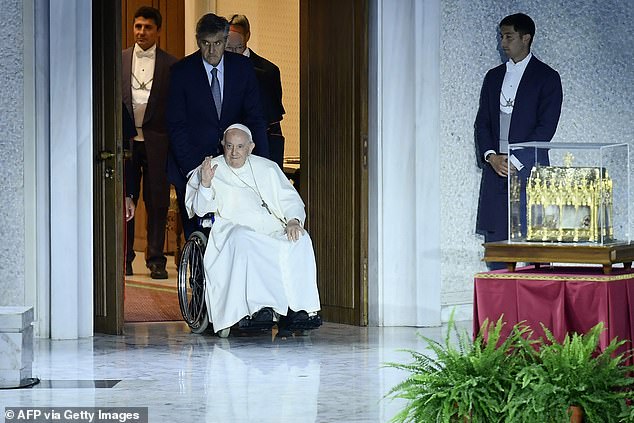 Pope Francis, seated in a wheelchair following knee treatment, arrives for an audience as part of the Festival of Families – 10th World Meeting of Families, on June 22, 2022 at Paul-VI hall in The Vatican 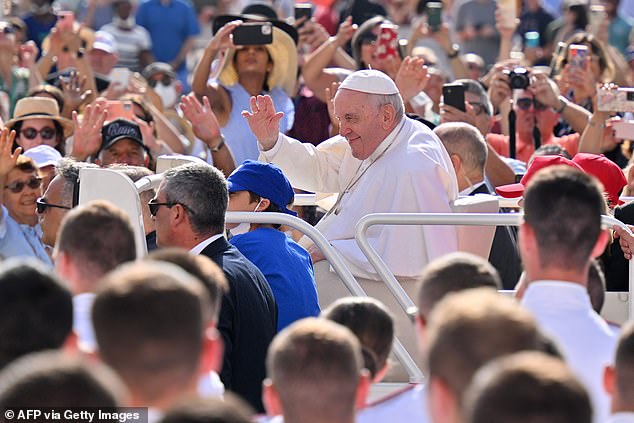 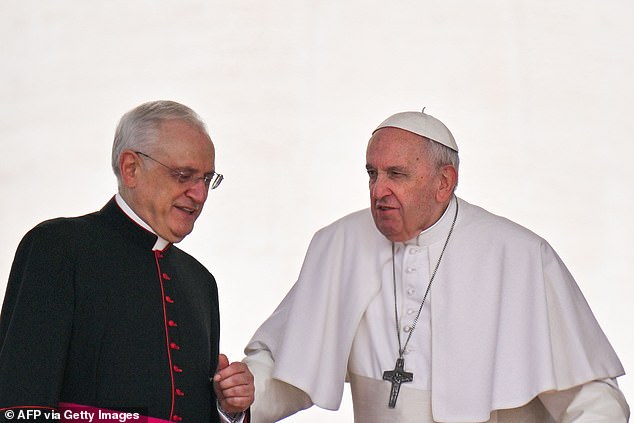 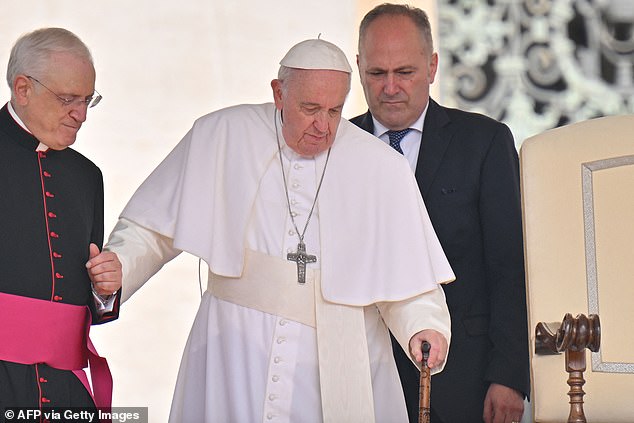 Francis previously told reporters that were his health to impede his functions as pope, he would consider stepping down 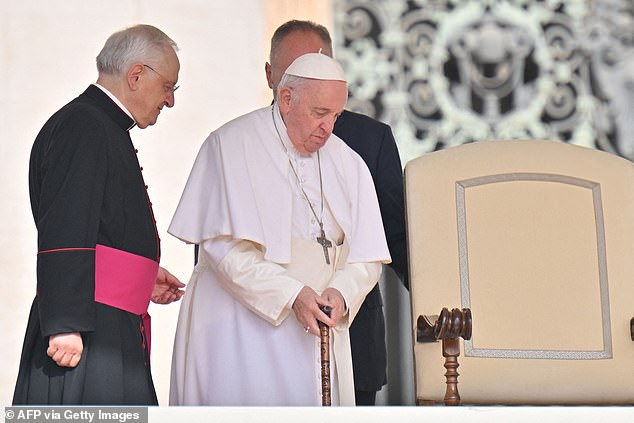 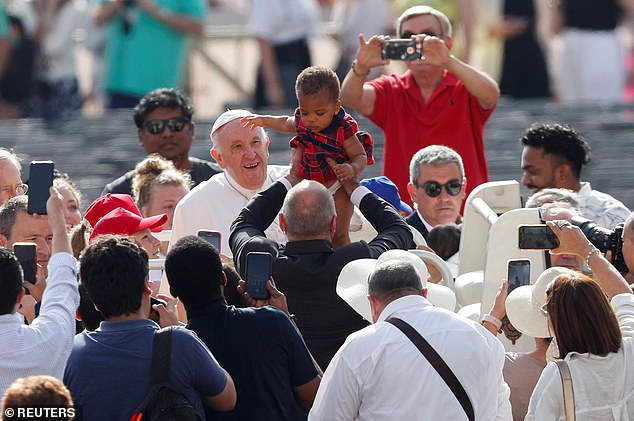 ‘He (Benedict) opened a door, the door to retired popes,’ the pontiff said then.

More recently in May, as reported by various Italian media, Francis joked about his knee during a closed-door meeting with bishops: ‘Rather than operate, I’ll resign.’

But Vatican insiders do not yet think Francis is on the verge of handing over the papal keys.

One source told AFP: ‘In the pope’s entourage, the majority of people don’t really believe in the possibility of a resignation.’

Rumours within the insular Roman Curia – the Catholic Church’s powerful governing body – are nothing new, and often fuelled by those with an interest, said Italian Vatican expert Marco Politi.

‘These rumours are encouraged by the pope’s opponents who are only eager to see Francis leave,’ he told AFP.

A trip to Canada at the end of July is still on the pontiff’s schedule, and the pope continues to receive injections in his knee and physical therapy, according to the Vatican.

As a child, Francis had one of his lungs partially removed. Today, besides his knee issue, he suffers recurring sciatic nerve pain.

Rumours of a resignation also flared last year after Francis underwent colon surgery, prompting him to tell a Spanish radio station that the idea ‘hadn’t even crossed my mind’.

Politi said of the latest resignation rumours: ‘At this stage, it is a question of being realistic and not alarmist.’

He said it was ‘hard to imagine’ Francis would resign while the Synod of Bishops – an initiative meaningful to Francis that is intended to study how the Church moves forward in a more inclusive way – is ongoing, due to complete in 2023.

Alberto Melloni, a professor of Christianity and secretary of the John XXIII Foundation for Religious Sciences in Bologna, told AFP ‘preposterous’ conjectures had been made about the pope’s health and his intentions.

‘These are things in which there is a desire to understand, to speculate, but there is little to say,’ he said.

Fall of Severodonetsk is Russia’s biggest victory since Mariupol #Breakingnews

‘My body, my choice’: Anger over US Supreme Court abortion ruling #Breakingnews