Skating champion Ashley Cain-Gribble suffered a terrible fall and was stretchered off the ice at the World Figure Skating Championships Thursday before Alexa Knierim and Brandon Frazier became the first Americans to win a worlds pairs’ title since 1979.

They won a small silver medal at the short program earlier this week and competed against ten other partnerships in the pairs free skate yesterday. 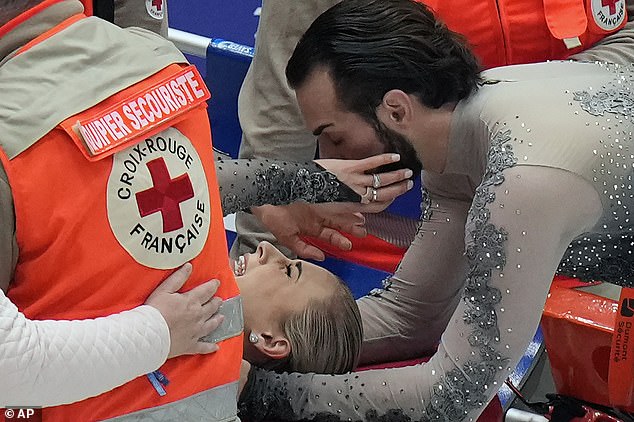 Cain-Gribble made an anguished apology to her skating partner for the slip-up, but he was having none of it and consoled her as she was stretchered off the ice to receive doctors’ help

But during an attempted triple Salchow air spin, Cain-Gribble lost her balance and came crashing down.

The pro sportswoman had already fallen twice during the routine, but the final fall brought the couple’s program to a sudden finish.

The hard crash landing had medics dash over with a wheeled stretcher, where Cain-Gribble was urgently checked for a concussion.

As she received treatment, one spectator shouted: ‘We love you Ash!’ 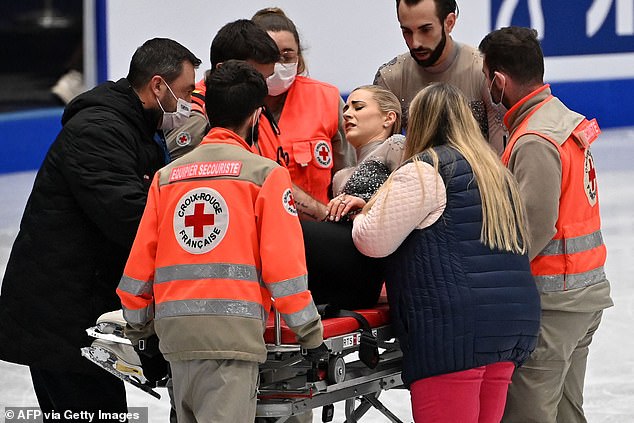 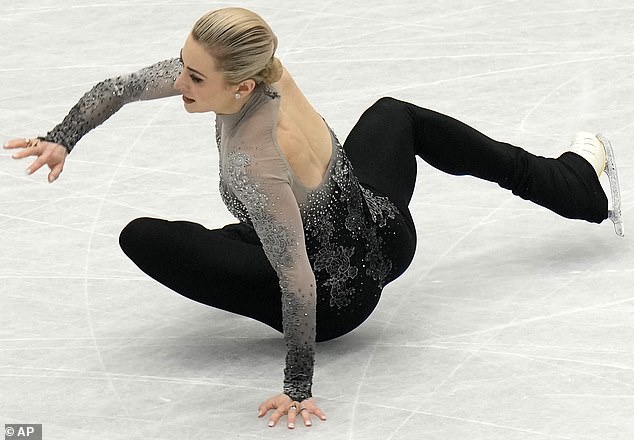 The horrific fall wrecked Cain-Gribble and LeDuc’s chances in the world pairs event at the Figure Skating World Championships in Montpellier, south France

She tearfully apologized to partner LeDuc, who refused to accept it and instead consoled his heartbroken partner.

Cain-Gribble was taken to the hospital for ‘additional evaluation and observation’, according to US Skating. 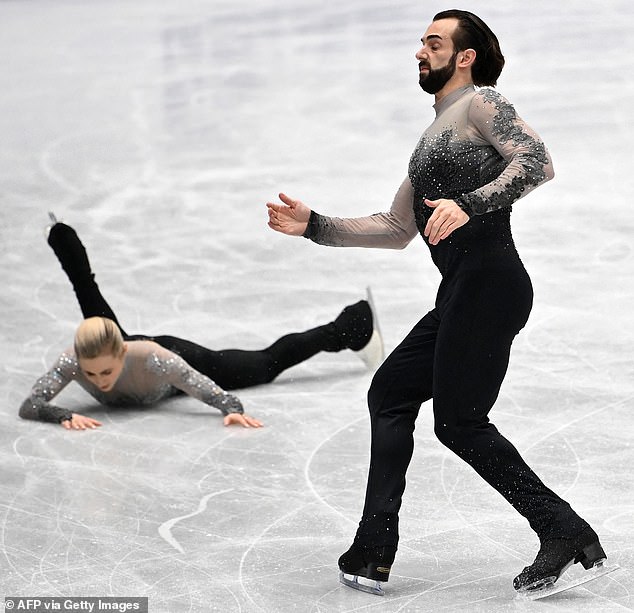 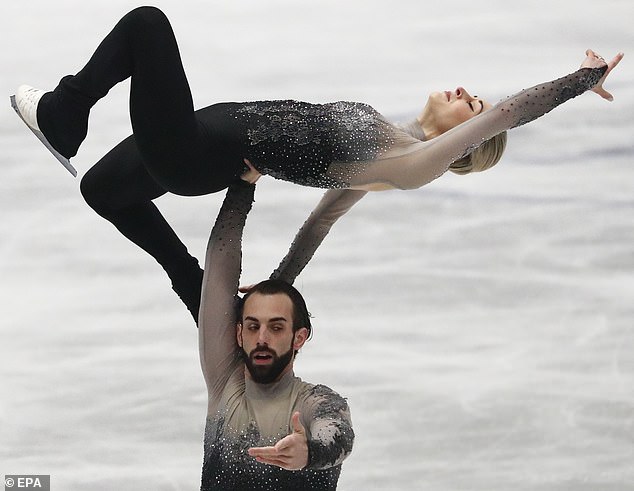 The couple had wowed judges in Montpellier, winning a silver medal in the short program prior

Knierim and Frazier hugged LeDuc as he walked off the ice following the end of the routine – and the pair’s chance at gold.

Knierim commented afterwards: ‘You realize how dangerous skating can be. Even when you are prepared, things can happen.’

Partner Frazier added: ‘Our hearts go out to them. They’re our friends first, competitors second, so we were naturally really concerned to see what was going on with them.’

The victorious couple comfortably won gold ahead of Japanese runners-up and bronze medalists from Canada. 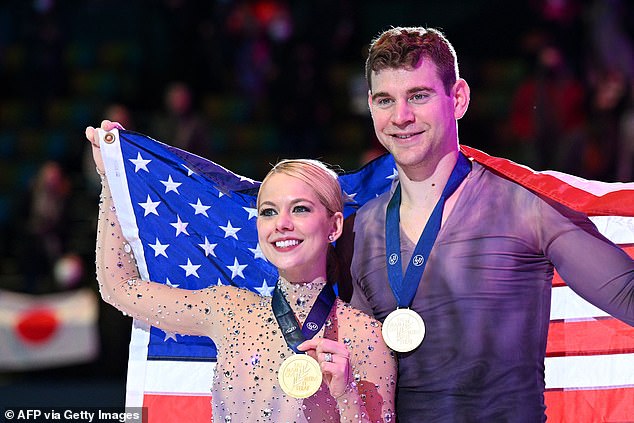 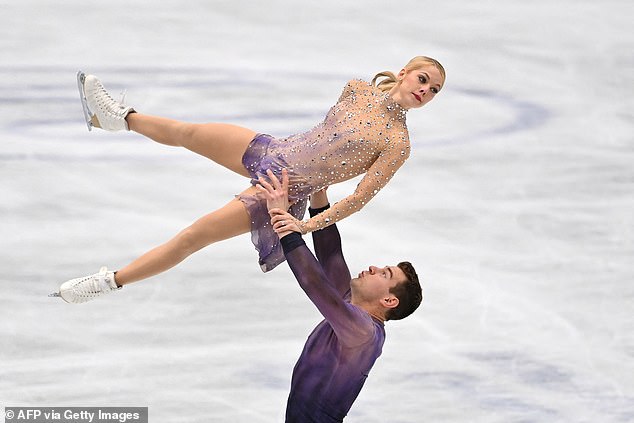 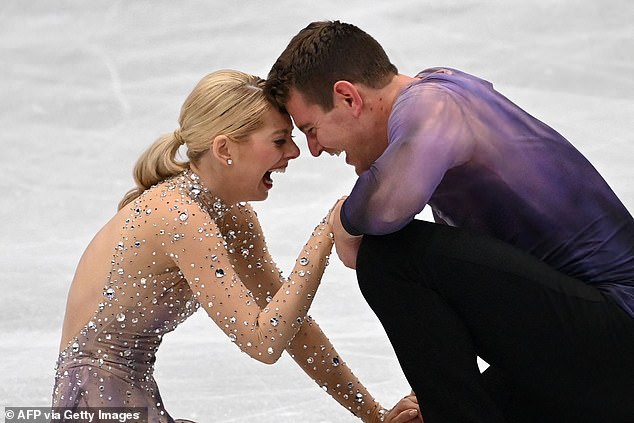 Tears of joy: once their routine was over, Knierim and Frazier wept with happiness and relief

They missed the national championships in January after Frazier tested positive for Covid, finishing sixth at the Beijing Winter Olympics last month.

Russia’s dominating skaters were banned from the tournament in France after their country invaded Ukraine in late February, maximizing the American skaters’ chances at top prizes.

Knierim and Frazier performed brilliantly to win their prize, taking 20 points more than the next-best couple.

Frazier said it was the victory was the highlight of his career and ‘even better’ than he imagined it would be.

‘For Alexa and I this was such a personal journey since we started, so to finish the season on this kind of program that means so much to us dearly’, he said. ‘I dreamed about this moment so many times but this was even better.’