Furious Tories today warned Emmanuel Macron’s ‘petulance’ could cost lives in the Channel after the French president lashed out at Boris Johnson uninvited Priti Patel from a crisis summit.

Mr Macron delivered a furious rant after the PM sent him an open letter demanding action on the migrant flows, branding Mr Johnson ‘not serious’ during a press conference on a visit to Italy.

Meanwhile, a spokesman for the president said the premier’s ‘mediocre’ proposals ‘don’t correspond at all’ with discussions the leaders had on Wednesday. ‘We are sick of double-speak,’ they swiped – adding that ‘you wonder whether Boris Johnson doesn’t regret leaving Europe’.

The bitter score-settling came as Storm Arwen rolls in towards the Channel – with MPs pleading for migrants not to risk more devastating tragedies by attempting to cross.

Despite the furore No10 flatly insisted the PM had no regrets about sending the letter, saying it had been written ‘in the spirit of partnership and cooperation’. ‘The public rightly want to know what we are looking at in terms of solving this problem,’ a spokesman said.

One government source told MailOnline regarding the French reaction to the PM’s letter: ‘It just goes to show what we’ve been dealing with for the past two years.’

French Interior Minister Gerald Darmanin told counterpart Priti Patel this morning that she is no longer welcome at the crisis meeting on Sunday, after UK condemnation of lax patrolling at French beaches where migrants are launching boats in a desperate bid to reach Britain.

The Elysee Palace had already warned Mr Johnson not to ‘exploit’ the disaster that saw dozens of migrants drown off the French coast earlier this week for political gain, but the premier penned a letter overnight with a five-point plan for cooperation.

Mr Macron could not contain his anger when asked about the developments. ‘I’m surprised when things are not done seriously,’ he seethed. ‘We don’t communicate between leaders via tweets or published letters, we are not whistle-blowers.’

A spokesman for Mr Darmanin, who yesterday accused Britain of ‘bad immigration management’ and enticing migrants with benefits and slack labour rules, said: ‘We consider Boris Johnson’s public letter unacceptable and in opposition with discussions between counterparts.

‘As a consequence, Priti Patel is not invited anymore to the meeting on Sunday.’

Former Brexit negotiator Michel Barnier, who is running for the French presidency in looming elections, also waded into the spat accusing Mr Johnson of being ‘in a state of mind of confrontation on all subjects’.

The summit with other European interior ministers will go ahead without the Home Secretary, whose aides had already travelled to Paris by Eurostar last night.

The decision sparked fury from British MPs. Tory backbencher Jacob Young tweeted: ‘Ridiculous behaviour from the French government seeming to forget that two days ago 27 people died crossing the Channel. Stop the boats – as simple as that.’

Fellow Conservative Nicola Richards said: ‘It’s truly childish behaviour being shown by France, becoming more and more evident they don’t want to stop these boats leaving France. 27 people died a matter of days ago, but they would rather to be petty than help find a solution.’ 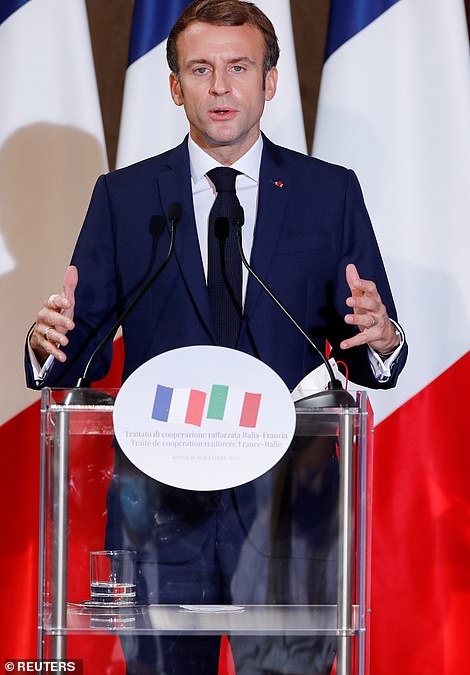 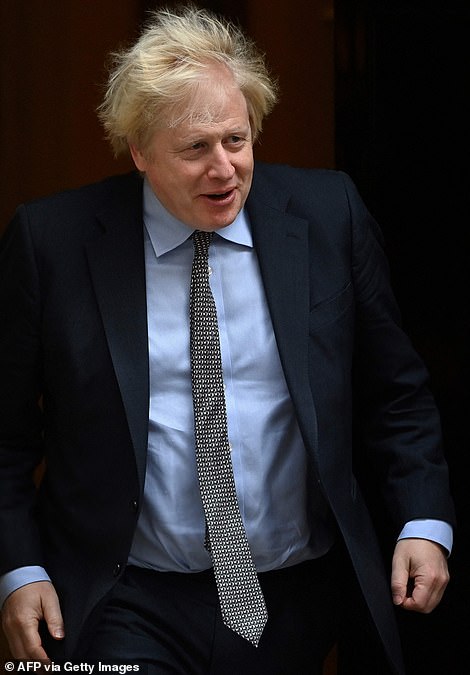 A group of more than 40 migrants get on an inflatable dinghy, as they leave the coast of northern France to cross the English Channel, near Wimereux, France, November 24, 2021 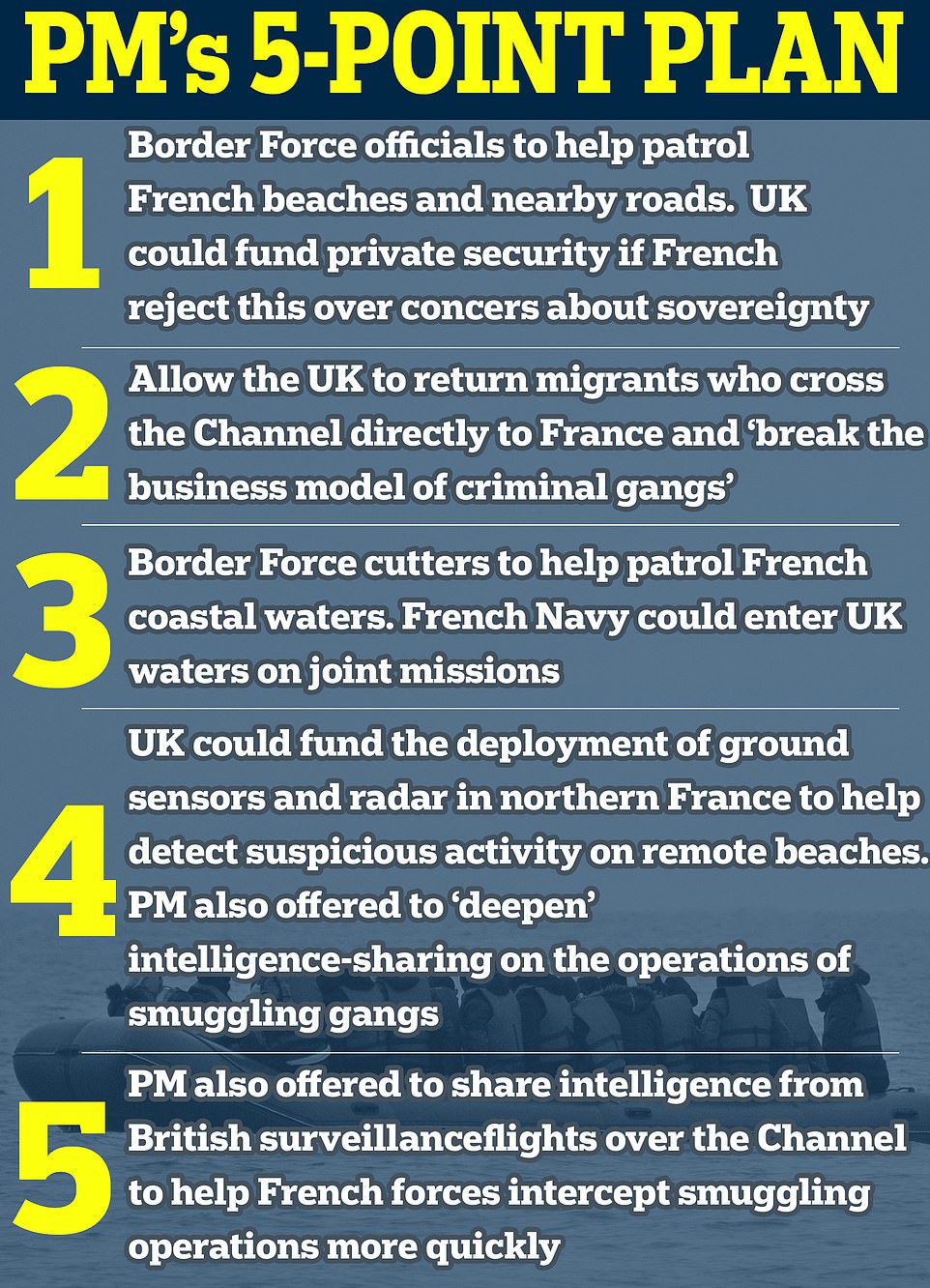 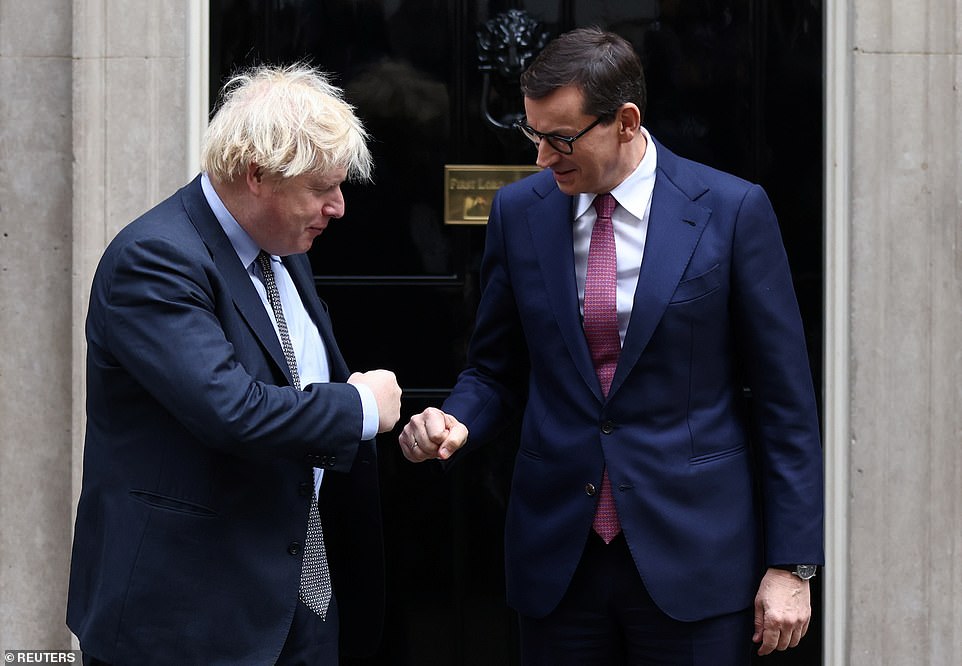 Hundreds gathered outside the Home Office in Westminster, London to protest the Government’s immigration policy and demand an end to deaths in the Channel following the tragedy

People gather around a banner with names of migrants died since 1999 while trying to cross t La Manche canal, at Parc de Richelieu in Calais, France, 25 November 2021.

The PM’s five-point plan that has infuriated the French

1. Border Force officials to help patrol French beaches and nearby roads. UK could fund private security if French reject this over concerns about sovereignty

2. Allow the UK to return migrants who cross the Channel directly to France and ‘break the business model of criminal gangs’

4. UK could fund the deployment of ground sensors and radar in northern France to help detect suspicious activity on remote beaches. PM also offered to ‘deepen’ intelligence-sharing on the operations of smuggling gangs

In a dramatic intervention, the PM wrote directly to the French president to formally offer hundreds of British personnel to stop desperate migrants from taking to the water.

This letter led to Paris pulling the plug on talks amid poor post-Brexit relations between the two countries and the difficulties they may face working together to curb the flow of migrants after 27 people drowned trying to reach British shores on Wednesday.

Seventeen men, seven women – one of whom was pregnant – and three teenagers died on when their dinghy deflated in the Channel, one of many such risky journeys attempted in small, flimsy and overloaded boats laid on by people traffickers charging £3,000 for a one way ticket to Kent.

In his letter, the Prime Minister also offered to pay for private security personnel to conduct the joint patrols if Border Force staff are deemed unacceptable. And he proposed joint maritime patrols, which could see Border Force cutters operating in French waters.

He also proposed greater intelligence sharing and the use of more advanced technology, including ground sensors and radar to detect migrants before they leave France.

In addition, he urged Paris to negotiate a ‘returns agreement’ that would allow the UK to send migrants back to France, breaking the traffickers’ business model.

Asked if Mr Johson regretted the open letter to Mr Macron, a spokesman for the PM said: ‘No.’

They stressed that the tone of the missive had been about ‘deepening cooperation’.

‘This is about deepening our existing co-operation and the work that is already being done between our two countries,’ the spokesman said.

‘We want to work closely with international partners, obviously including France, on what is a shared issue so that we can find shared solutions.

‘We have seen the tragedy that happened earlier this week. As the PM said we need to do more and he has outlined areas in his letter where he believes we can do more to work together.’

Pushed on whether the French were ‘putting lives at risk’ with the fit of pique, the spokesman said: ‘We hope they reconsider.’

Home Office staff are still in France after travelling ahead of the meetings, according to No10.

‘I believe our officials are over there are we speak,’ the spokesman said.

Pressed on what Mr Johnson will do to repair relations with Mr Macron, the spokesman refused to say if there are plans for a call. ‘I think the PM has spoken before about the positive relationship he has with the French president.’

The spokesman also dismissed the jibe that Mr Johnson regretted leaving the EU.

Mr Barnier said today: This is obviously an additional provocation from Boris Johnson, who is in a state of mind of confrontation on all subjects with the European Union…

‘I find this is frankly absolutely inadmissible. What you don’t need is confrontation, it’s to sit down at the table and find solutions.’

Mr Patel yesterday said Mr Macron had the power to ‘end this now’. But Sunday’s talks with Europe’s interior ministers will go ahead without the UK.

Downing Street said if Mr Macron backed down over British troops or police on French soil, there could be British boots on France‘s northern shore as early as Monday in a radical bid to prevent a repeat of Wednesday’s tragedy.

France has so far fiercely resisted any move to allow British law enforcement officers to operate on its soil, claiming it would violate French sovereignty.

Yesterday, Mr Macron’s government continued to push back against the move, warning Mr Johnson not to ‘exploit’ the crisis for political ends.

But Government sources insisted that after 27 migrants drowned in the ‘dreadful disaster’, the French president had to relent.

Transport Secretary Grant Shapps said Boris Johnson’s proposals to President Emmanuel Macron to tackle the migrant crisis had been made in ‘good faith’.

‘I think it is really important that we work hand-in-glove with the French. I don’t think there is anything inflammatory to ask for close co-operation with our nearest neighbours,’ he told the BBC Radio 4 Today programme.

‘The proposal was made in good faith. I can assure our French friends of that and I hope that they will reconsider meeting up to discuss it.’

Tim Loughton, the Conservative MP for East Worthing and Shoreham who sits on the Commons Home Affairs Committee, accused France of petulance.

He said on Twitter: ‘The French have got to get real and recognise there are consequences from turning a blind eye rather than stopping the migrant boats at source and those consequences are tragedies like the one two days ago.

‘Partnership working is the only way to find a solution not petulance.’

Dover MP Natalie Elphicke told MailOnline that France had to see sense with the weather getting more ‘treacherous’.

‘Conditions on the English Channel look set to become even more treacherous in the coming days. It’s urgent that France works with the UK and EU allies to stop more lives being lost,’ she said.

‘No-one should be making this kind of journey across a stormy sea. The French authorities should appeal for people to heed the weather forecast and stay where they are.’

More horrific details have been emerging about Wednesday’s tragedy. The death toll was originally reported as 31 by French authorities, but later revised to 27.

One migrant feared to be among the dead had phoned a friend to say: ‘It’s not good, the engine isn’t powerful enough – I don’t know if we’re going to make it.’ Mohammad Aziz, 31, has not been heard of since his frantic call.

Mr Johnson and Mr Macron spoke on Wednesday night, with the Elysée later briefing that the French president had asked the PM ‘to refrain from exploiting a tragic situation for political ends’.

Government sources said last night there were ‘positive noises’ from Paris about the possibility of a new deal to combat the crisis.

‘After this dreadful disaster, the political movement now seems to be in a positive direction,’ one said. ‘From the noises we are hearing, there seems to be movement on the French side.’ In the first sign of a climbdown, Mr Macron yesterday said he would be seeking ‘extra help’ from the UK.

Ms Patel urged Mr Macron to take up the PM’s offers. ‘We need to deploy every single tool that we have to save lives and to prevent the loss of life, and that is effectively what this is now about,’ she said.

Some of the migrants feared drowned on Wednesday when a dinghy sank in the Channel (pictured) are believed to have travelled to France via the controversial new Belarus route. The dead were confirmed as two boys and a girl; seven women, including an expectant mother; and 17 men.

In a string of developments: 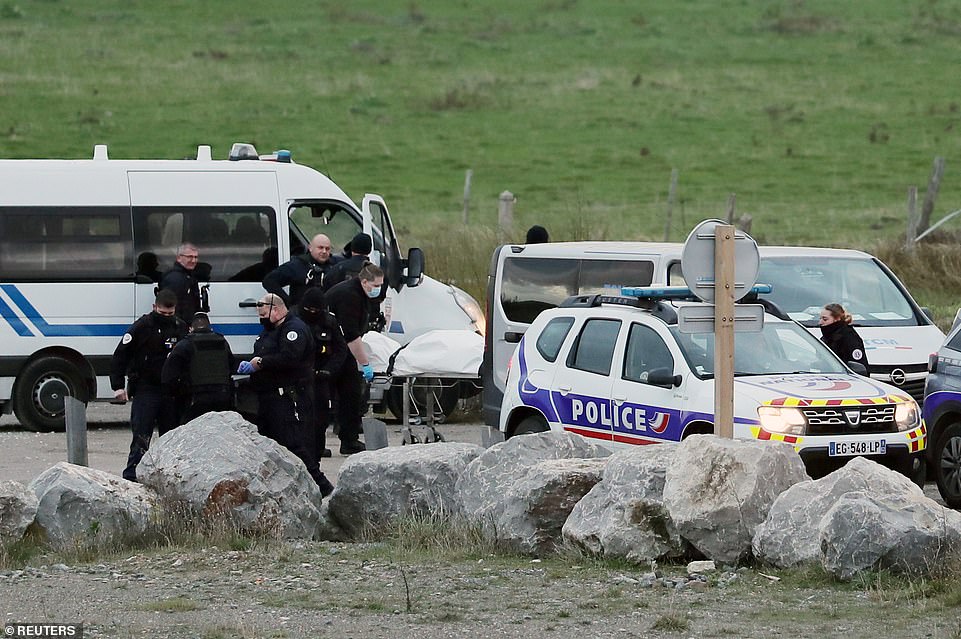 French police carry on a stretcher an unidentified body discovered off the Sangatte beach, the day after 27 migrants died when their dinghy deflated as they attempted to cross the English Channel, in Sangatte, near Calais, France, November 25, 2021 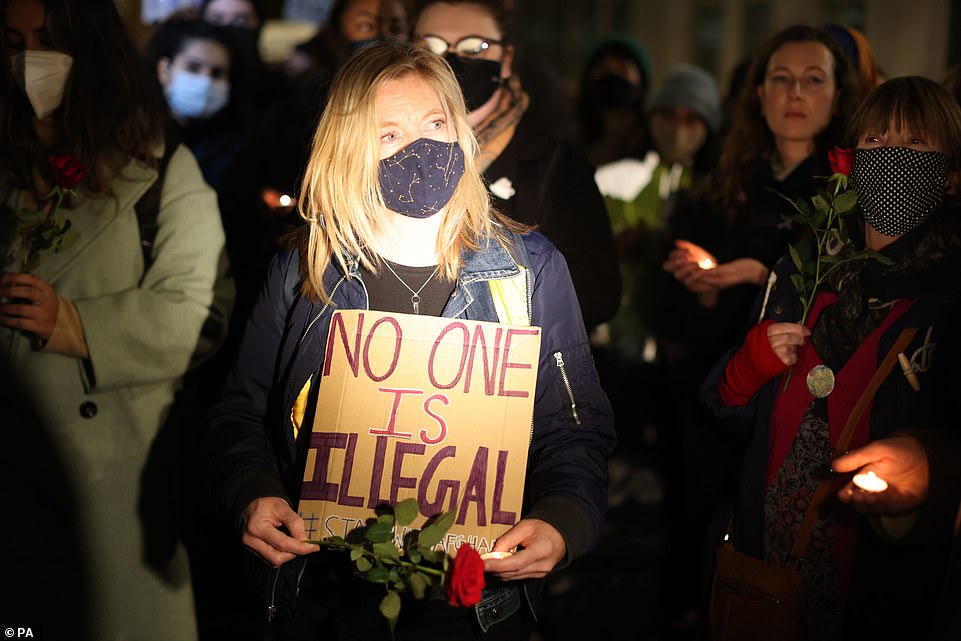 Migrants in Calais told MailOnline they are more determined than ever to reach the UK as French police again failed to stop 50 migrants crossing the Channel to Britain today. Pictured: Protestor holds ‘no one is illegal’ placard outside Home Office

A person lights a candle as people pay tribute to the 27 migrants who died when their dinghy deflated as they attempted to cross the English Channel, at the Richelieu Park in Dunkerque, France, November 25, 2021

20 defining moments from his career so far #defining #moments #career