It has taken 100 days for Kylian Mbappe to climb from the depths of despair. From his penalty that was saved as France capitulated against Switzerland in Euro 2020 and a summer of turmoil as he tried to force a move from Paris St-Germain.

But last night in Milan, Mbappe was a hero once again as he dashed clear in a flurry of stepovers to score the winning goal in the 80th minute against Spain and France added the UEFA Nations League to the World Cup trophy they won three years ago.

Spain thought it was offside, they surrounded referee Antony Taylor and goalkeeper Unai Simon lined up the ball to take a free-kick, but the VAR ruled yes to the goal. 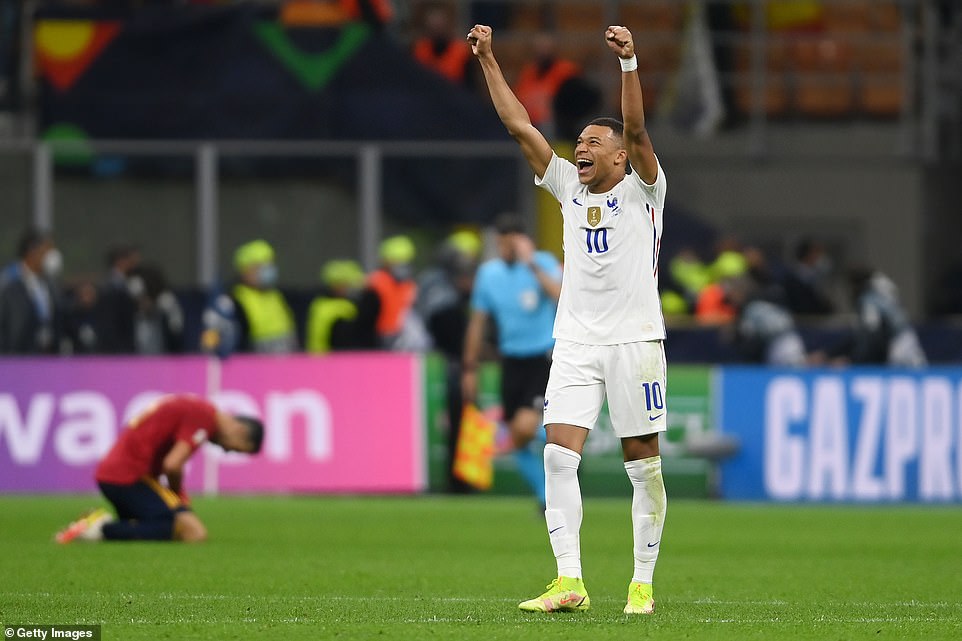 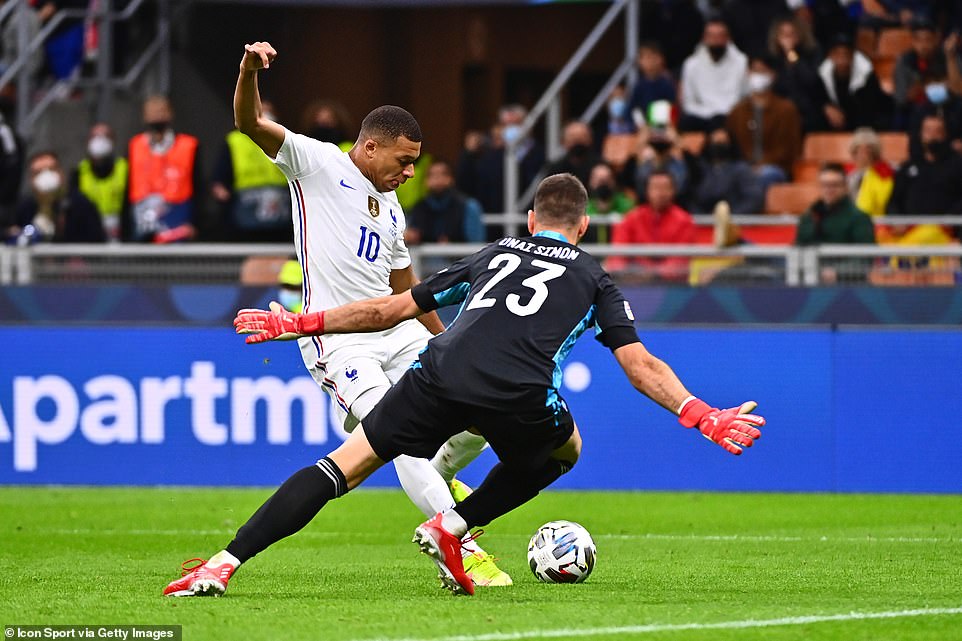 A smart finish down at Unai Simon’s near post sealed the game in the second-half, the Frenchman using his quick feet 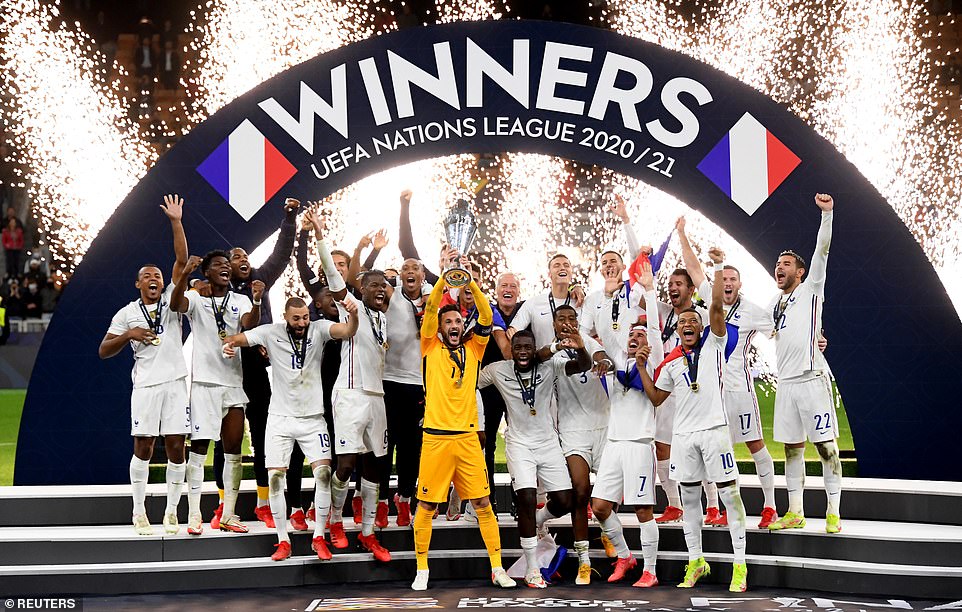 France were ahead having trailed to a goal by Mikel Oyarzabal which was wiped out by a stunning equaliser from Karim Benzema. And they clung on for victory, with two exceptional saves by Hugo Lloris in the closing stages.

Within six minutes of the start of this game, Benzema had skipped clear and around goalkeeper Simon but his touch forced him wide and he could not fashion a shot from a tight angle. Instead, he looked to cross. Cesar Azpilicueta, one of five Premier League players starting for Spain, was back to clear.Ferran Torres, who scored both goals in the semi-final against Italy, was ruled fit to start despite an ankle problem, and positioned himself wide on the right, where his movement and change of pace forced wing-back Theo Hernandez, France’s match-winner against the Belgians, to focus on defensive duties.

Seventeen-year-old Gavi retained his place in midfield, just four days after he became Spain’s youngest international. Gavi was fortunate to escape a yellow card when he was late into a challenge on Aurelien Tchouameni, the Monaco midfielder called in to replace Adrien Rabiot, who was ruled out by a positive Covid-19 test on the eve of the game.

Premier League referee Anthony Taylor let the tackle go and it set the bar for a physical first half.

France continued with their system of three central defenders although Raphael Varane was forced off in the first half with an injury sure to alarm Manchester United manager Ole Gunnar Solskjaer.

Varane winced as he lengthened his stride and cut out a low cross from Gavi at the expense of a corner five minutes before the interval.

It seemed innocuous but the United centre-half signalled towards the bench immediately and was soon on the floor asking for treatment. 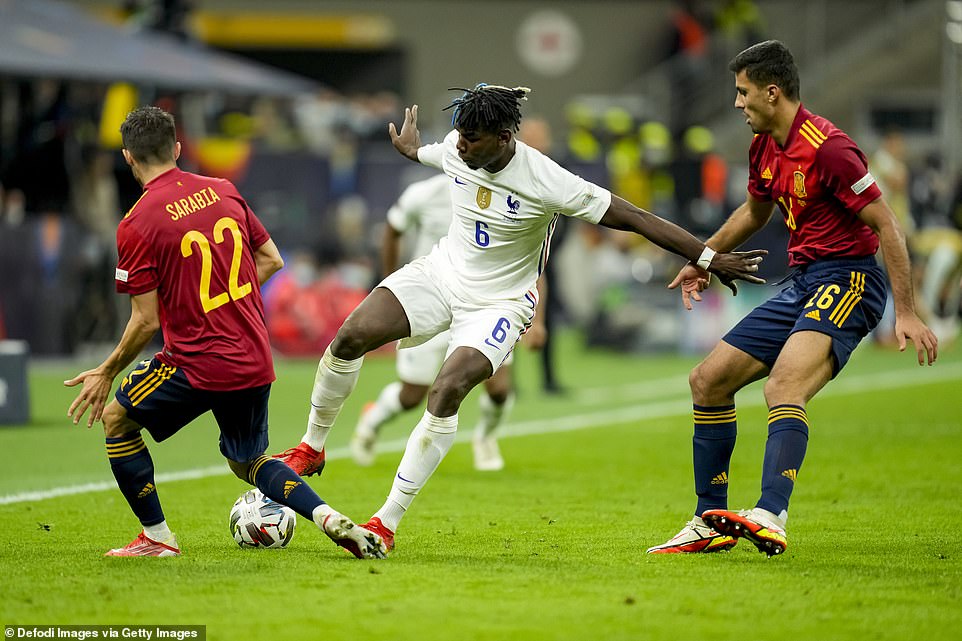 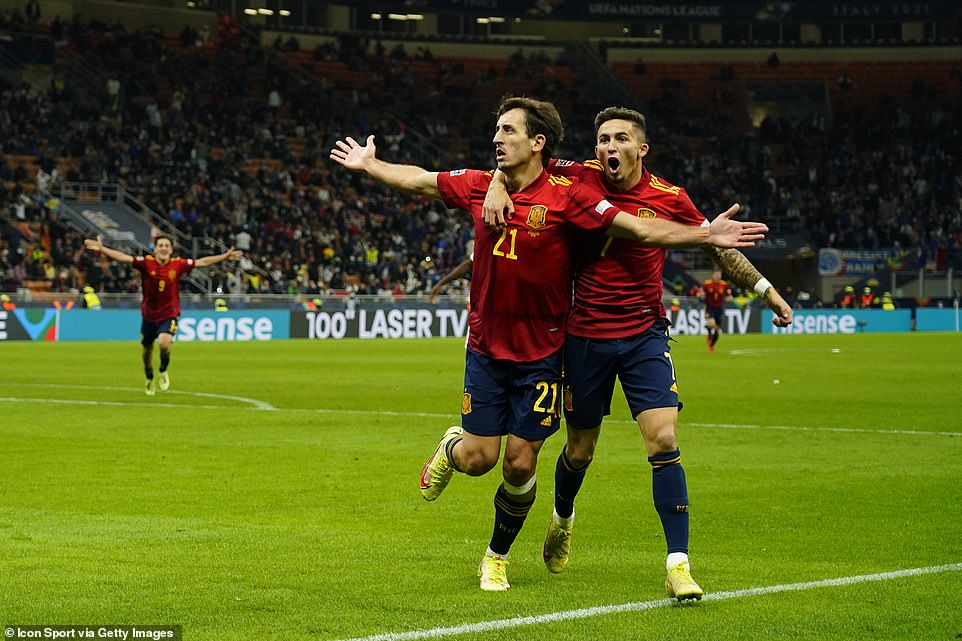 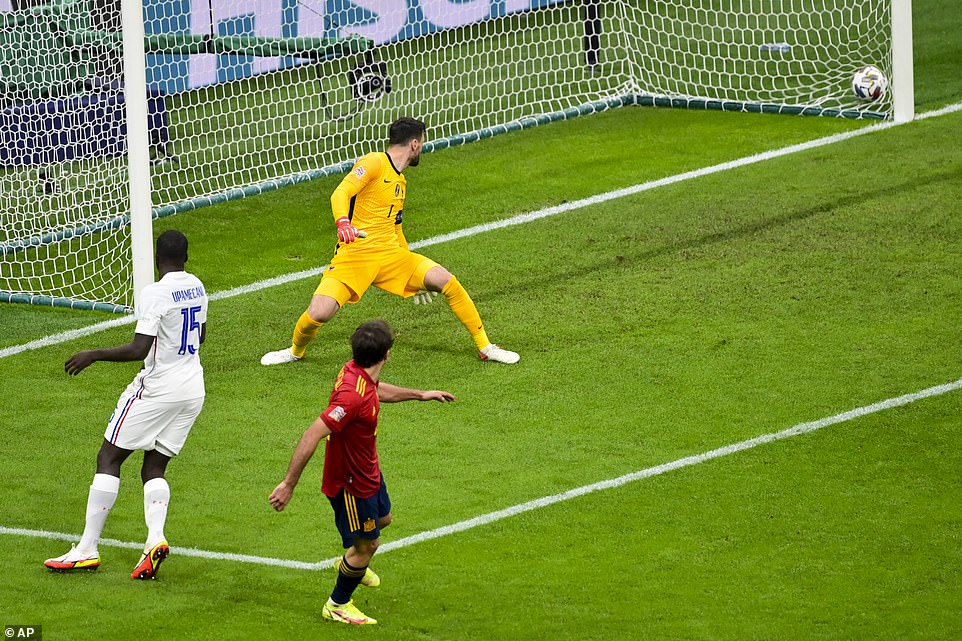 Bayern Munich defender Upamecano slotted into Varane’s position in the centre of the back three, a reminder if needed of the depth of quality at the France manager’s disposal.

Antoine Griezmann was winning his 100th cap, a milestone lifting him into an elite group of footballers. Perhaps even more remarkable is that he has now appeared in the last 57 games for his country.

Deschamps, who is narrowly ahead of him on 103 caps, values his intelligence and his ability to read the game.

In the first half, he spent most of his time tracking back and helping to break up the Spanish passing patterns but the World Cup holders were more expansive in the second half.

They quickened the tempo on the turnover of possession and swept forward with more intent. 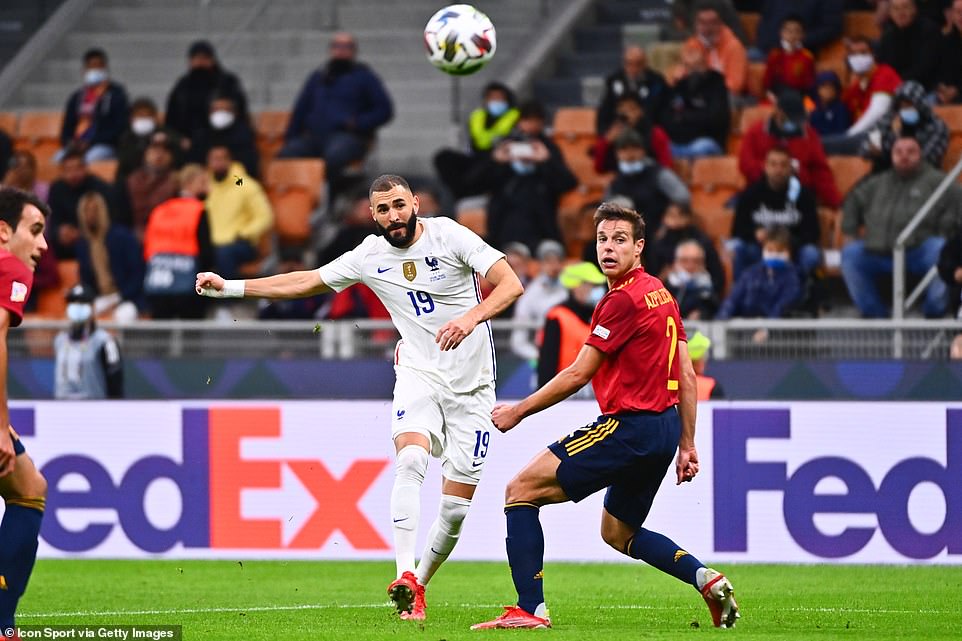 Just moments after Oyarzabal’s opener France attack, and Benzema curled a sublime striker into the top corner past Simon 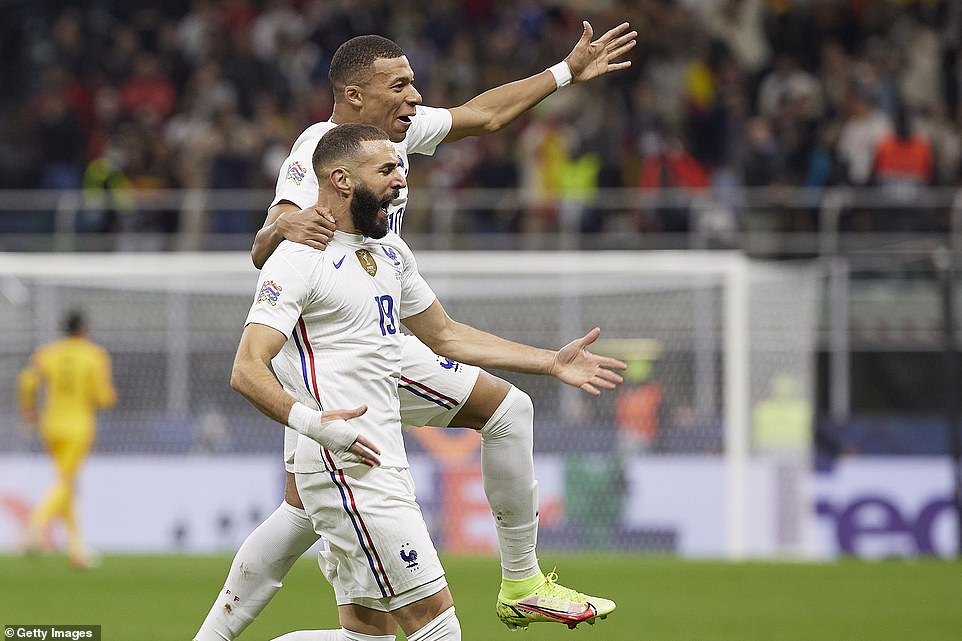 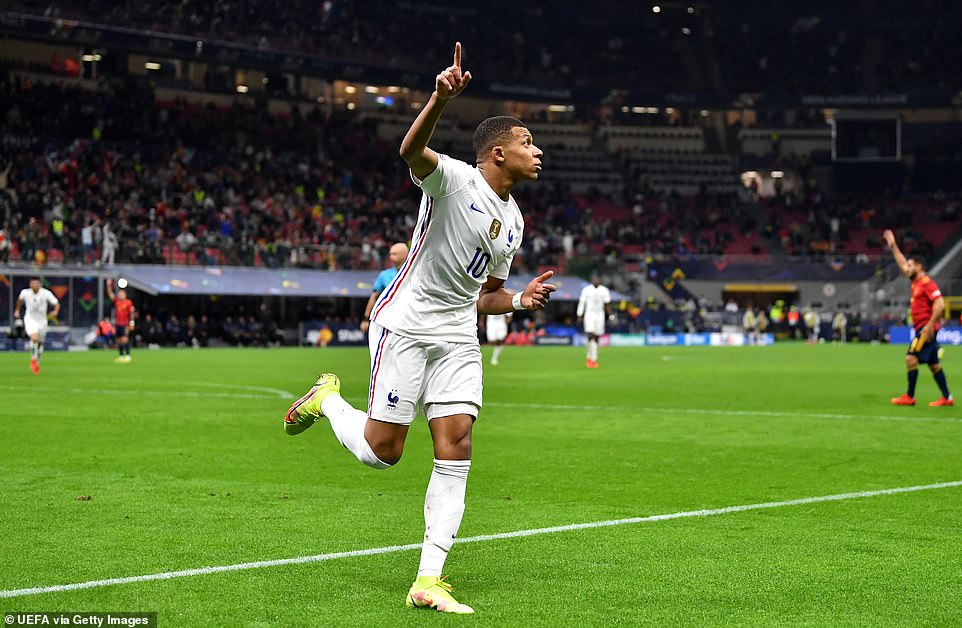 Mbappe finished it, showing the PSG superstar can change any game in the blink of an eye if he is given a sight at goal

Marcos Alonso was required to make an excellent sliding tackle to halt Mbappe as he moved into the penalty area. But France lost a little of their control and composure. Pogba picked up a yellow card when he was a fraction late into a tackle with Sergio Busquets who, as ever, made the most of it.

Pogba fumed, no doubt thinking about the tackles which were unpunished in the first half. He took issue with the close attention from Rodri, moments later, before launching into a risky 50-50 challenge.

There was a sharp intake of breath from 35,000 inside the San Siro but, fortunately for Pogba, he came out with the ball.

These flashpoints seemed to inspire Pogba who was increasingly influential. His power took him clear of Gavi in midfield to launch a move that ended with Hernandez firing against the bar. 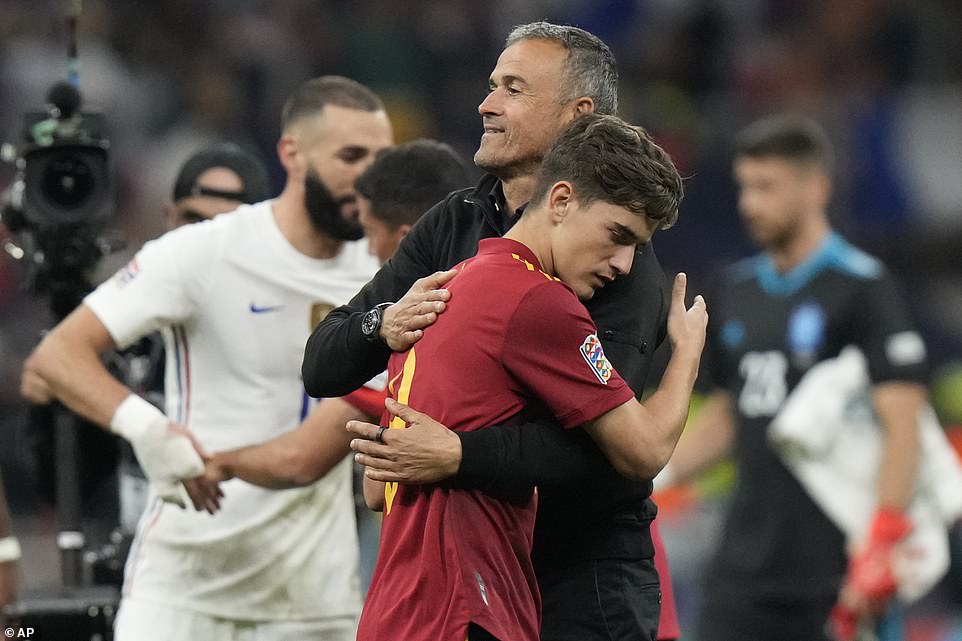 Spain took the lead, however, in the 64th minute when Busquets released Oyarzabal, who was played onside by Jules Kounde and resisted a challenge from Upamecano before slamming a shot past Hugo Lloris from an angle.

France have conceded first in seven of their last eight games, but have always found a way to fight back and they did it again to level within two minutes.

Once again, Pogba started the move and when the ball reached Benzema on the left, he flicked it onto his right foot and curled it into the top corner. Goalkeeper Simon reached it with his fingertips but could not push it wide.

Re-live Sportsmail’s live coverage of Spain 1-2 France, brought to you by TOBY MILES