Passers-by were left horrified when a ‘mentally-ill’ father bit off his six-year-old son’s penis and spat it out.

Witnesses in Shenzhen, in the Guangdong province of China, said the 32-year-old father was walking with his naked son and four-year-old daughter on the street when he commanded the boy to lick his penis.

When the boy refused, he then attacked him using his teeth to remove his son’s genitals. 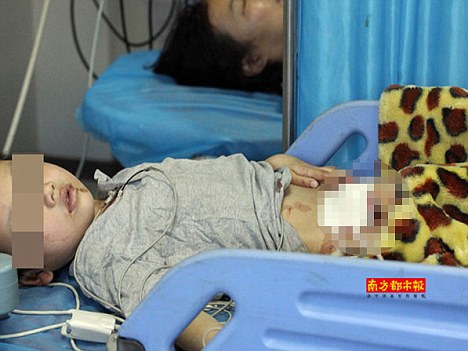 Despicable: A picture of the six-year-old boy whose father bit off his penis in Shenzhen in the Guangdong province of China

A shocking picture in the City Post newspaper shows the youngster laying on a hospital bed with the area bandaged.

Editors at the paper obscured the boy’s face to protect his identity.

The paper reports doctors were able to successfully reattach the boy’s genitalia, however it is too early to tell whether he will have normal use of the appendage. 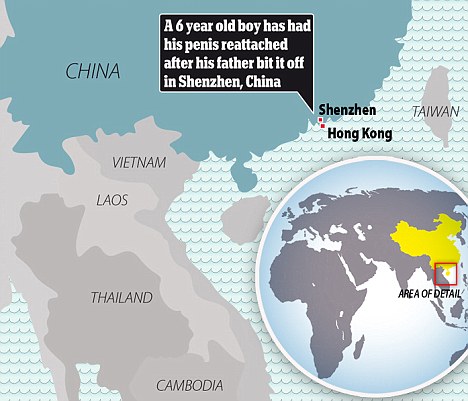 Police said the father is likely to have a mental illness as he was recently seen pretending to strangle his son on their balcony, according to witnesses.

Investigations also found that the man, who was only identified by the surname Yu, was severely in debt after a failed business venture and was often seen gambling.

Relatives will now care for the six-year-old boy and his sister.