Heroes in furry coats! Brave pets who helped during two world wars are brought to life in colorized photos – including a mine-detecting dog and a ship’s cat who survived injuries from a cannon shell 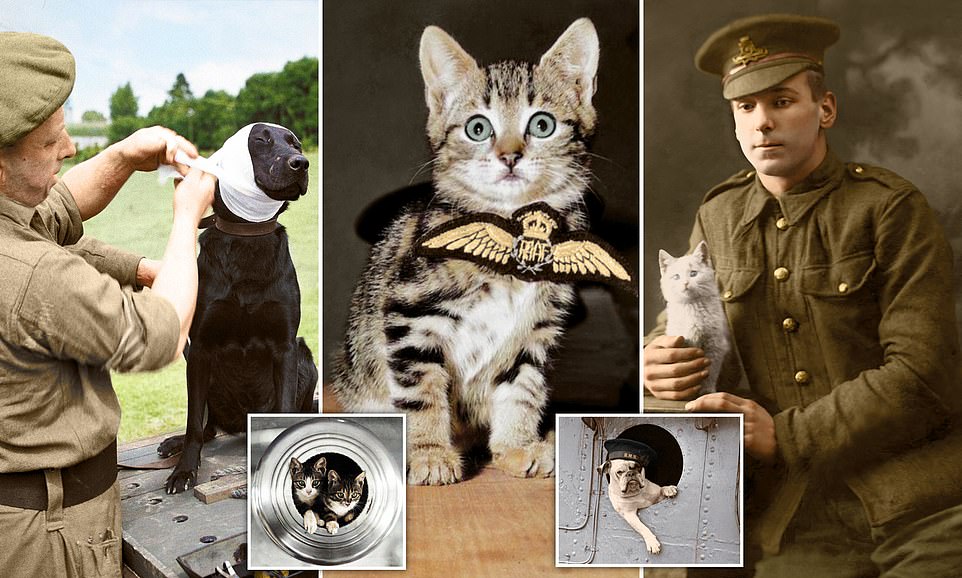 The brave pets who mucked in to help during war have been showcased in a series of colorized snaps. Tom Marshall, who lives close to the Defense Animal Training Regiment base near Melton Mowbray, transformed the black-and-white images for PhotograFix. He decided to recolor the pictures to honor the memories of the animals who gave their lives in human wars and urged people to wear a purple poppy commemorating animal sacrifices alongside their red ones this Remembrance Sunday. 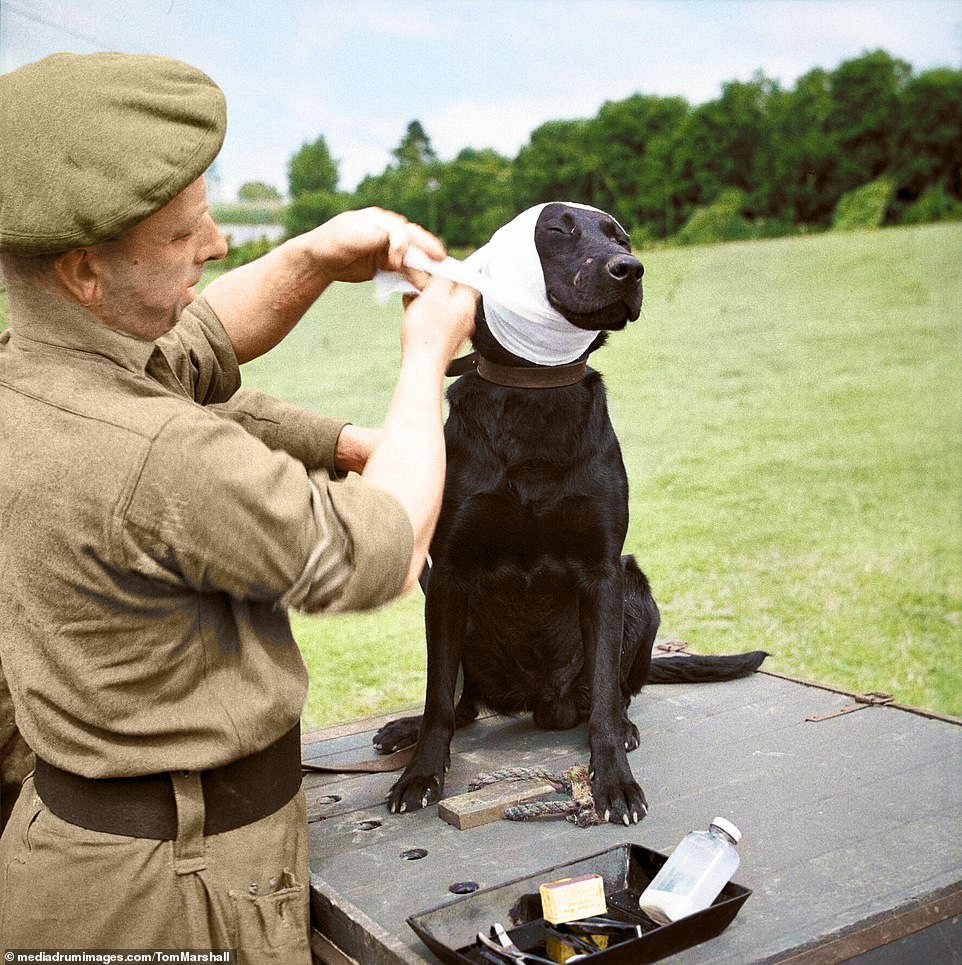 Among the images he has bought to life is one from July 1944, showing Jasper, a mine-detecting dog, having his ear bandaged by a sergeant of the Royal Army Veterinary Corps in Bayeaux, France . 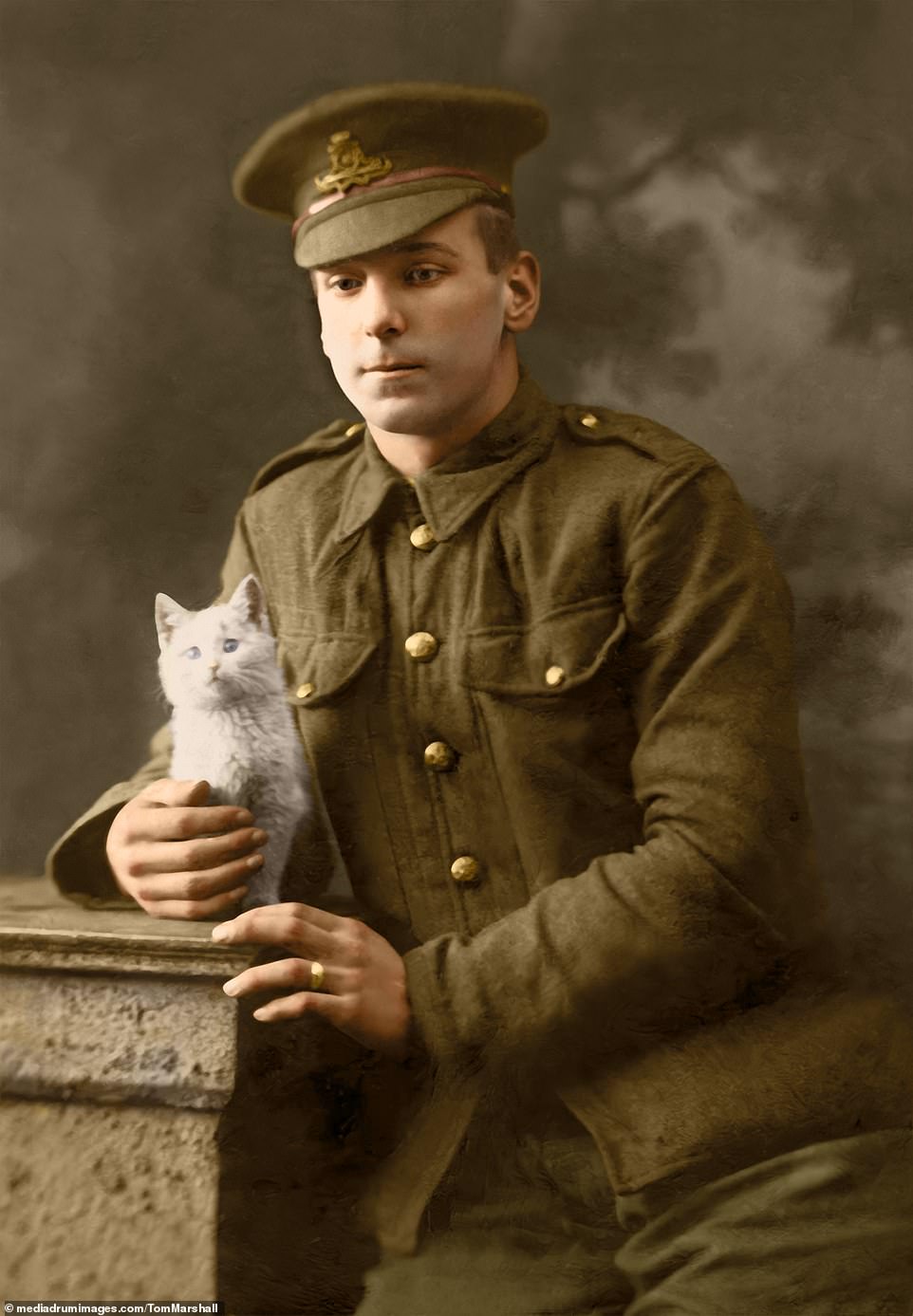 Another of the pictures is of Simon, the Royal Navy’s HMS Amethyst ship’s cat, who is the only cat to have been awarded the Dickin Medal as of 2021. Simon was adept at catching and killing rats on the lower decks. He rapidly gained a reputation for cheekiness, leaving presents of dead rats in sailors’ beds and sleeping in the captain’s cap. 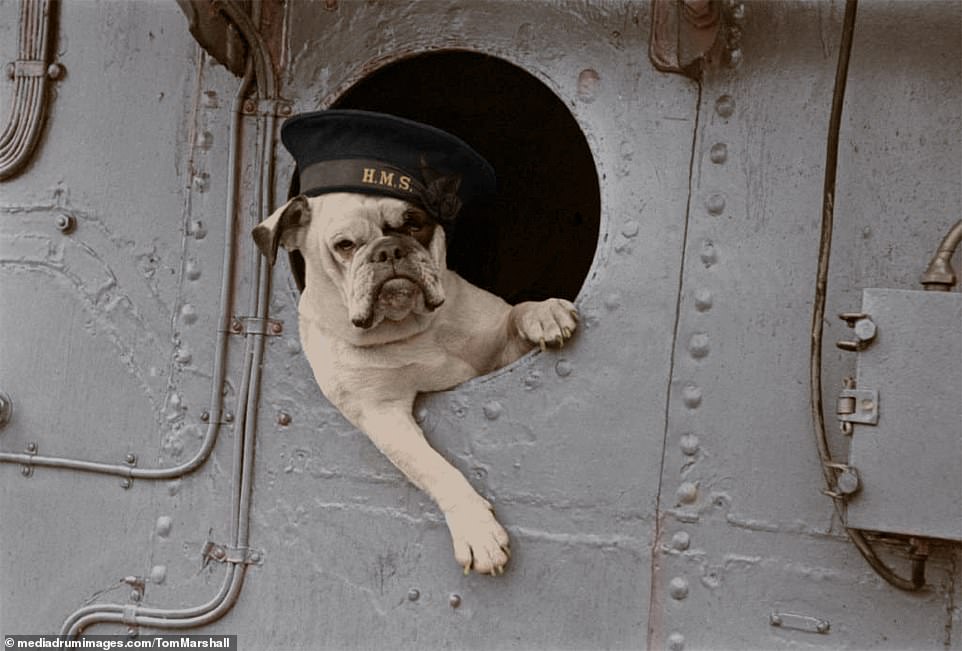 Another image shows Venus the bulldog, mascot of the destroyer HMS Vansittart, leaning out of the ship in 1941 while another brings to life HMS Stork’s mascot who was on board ship in Liverpool in May 1941. 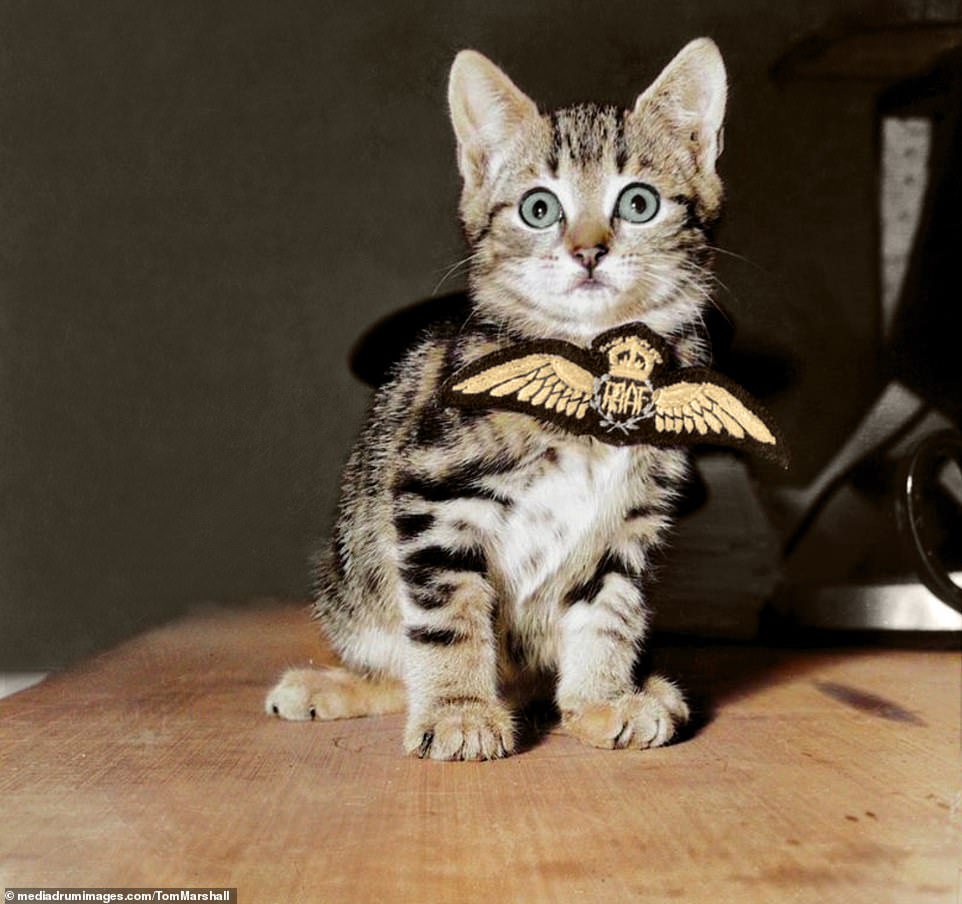 Another feline to be brought to life by Tom in the images was Aircrew, a young cat adopted by the Royal Australian Air Force Flying Training School, Cressy, Victoria, in Australia. 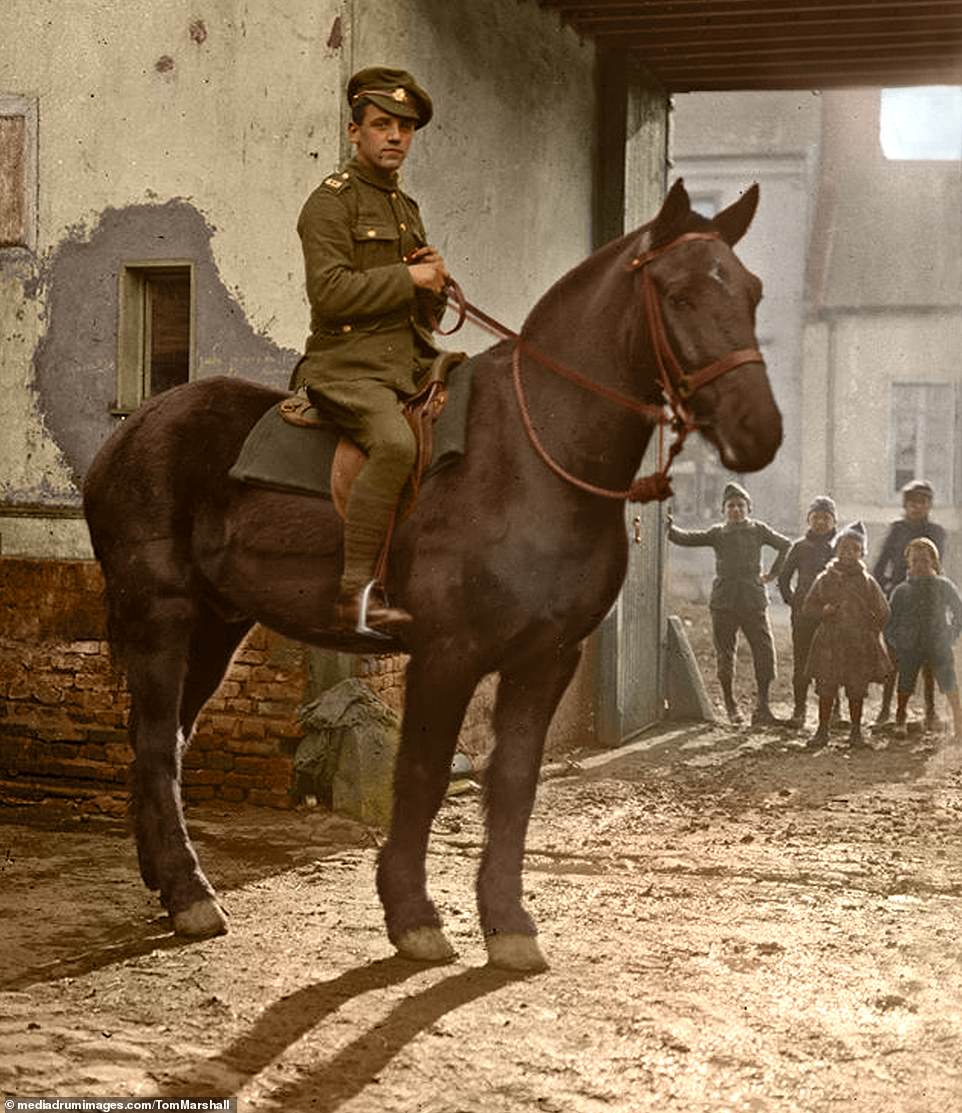 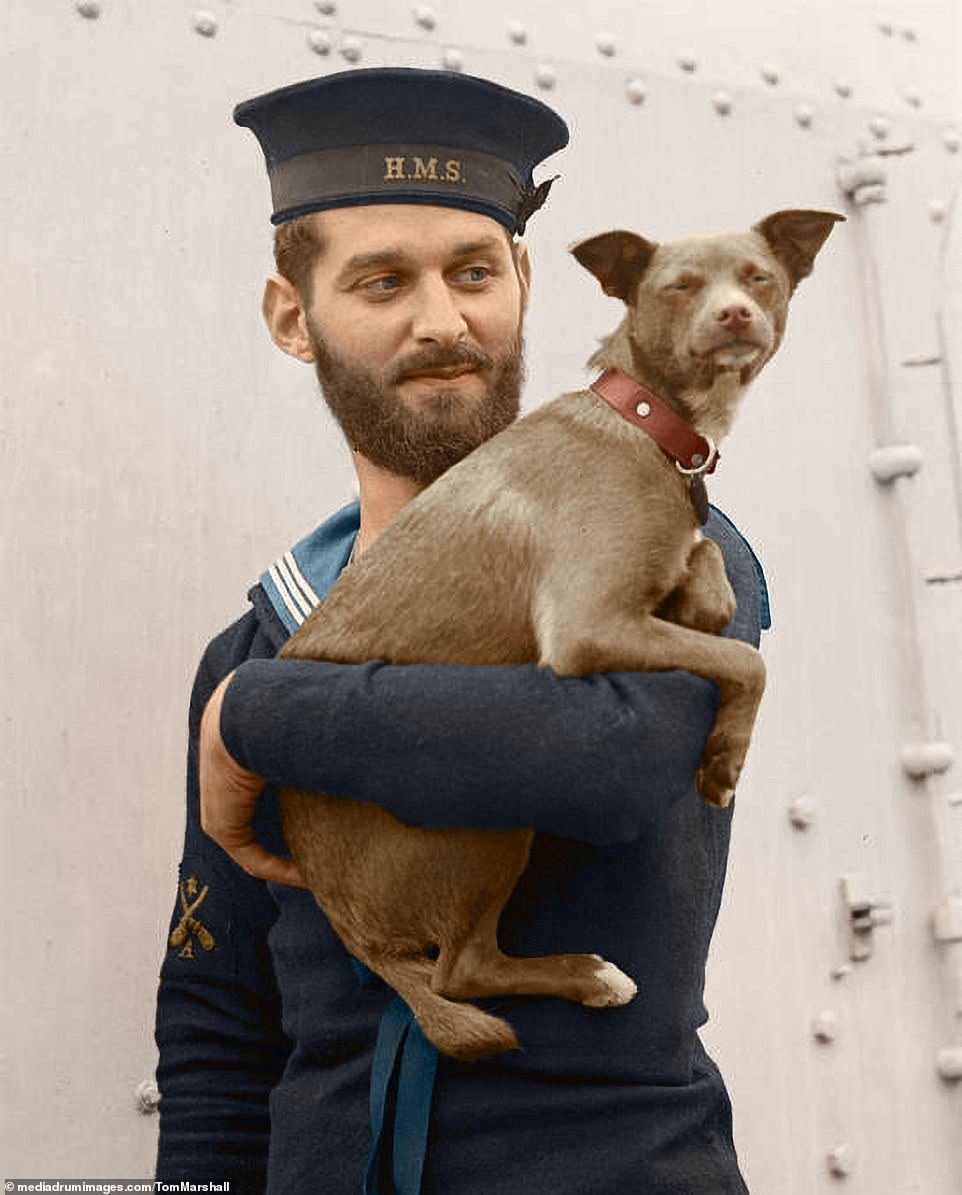 Like Simon, mixed breed terrier Rip was awarded the Dickin Medal for bravery in 1945. He was found as a stray in Poplar, London, in 1940 by an Air Raid Warden, Mr. E King, and became the service’s first search and rescue dog. He is credited with saving the lives of over 100 people. Rip was not trained for search-and-rescue work, but took to it instinctively and his success was held partially responsible for prompting the authorities to train search-and-rescue dogs towards the end of World War II. 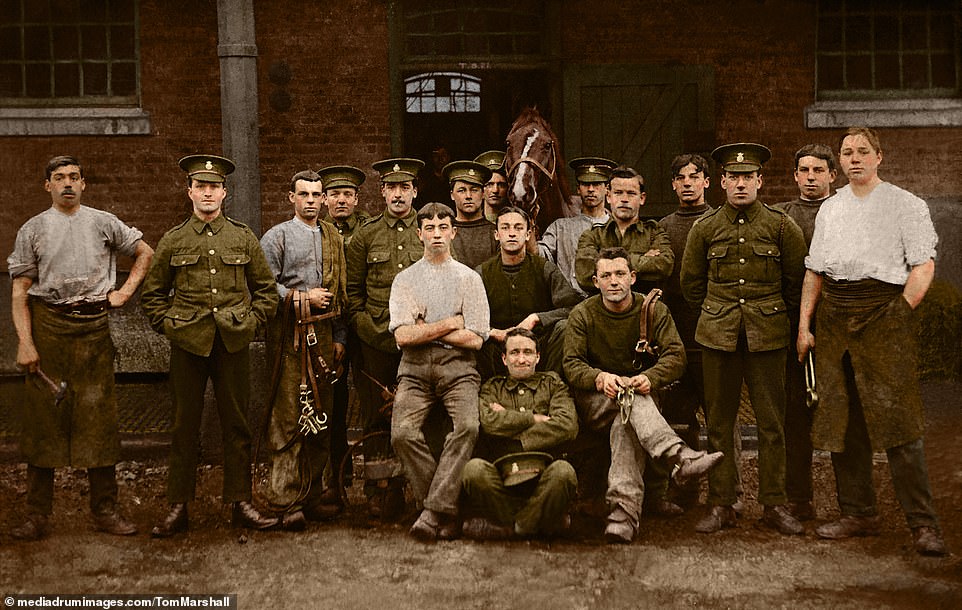 This picture postcard was sent by William Field (1890 -1917) to his brother Harry, postmark dated December 1909, from Aldershot barracks in Hampshire. William is stood third from the left with bridles in his arms. The original postcard is still owned by Harry’s daughter Margaret. William served with the 7th Queens Own Hussars at West Cavalry Barracks, Wellington Lines, but he died in action serving for the Kings Own Hussar’s in WW1. He laid to rest at Monchy British Cemetery, Monchy-Le-Preux, Pas de Calais, France. 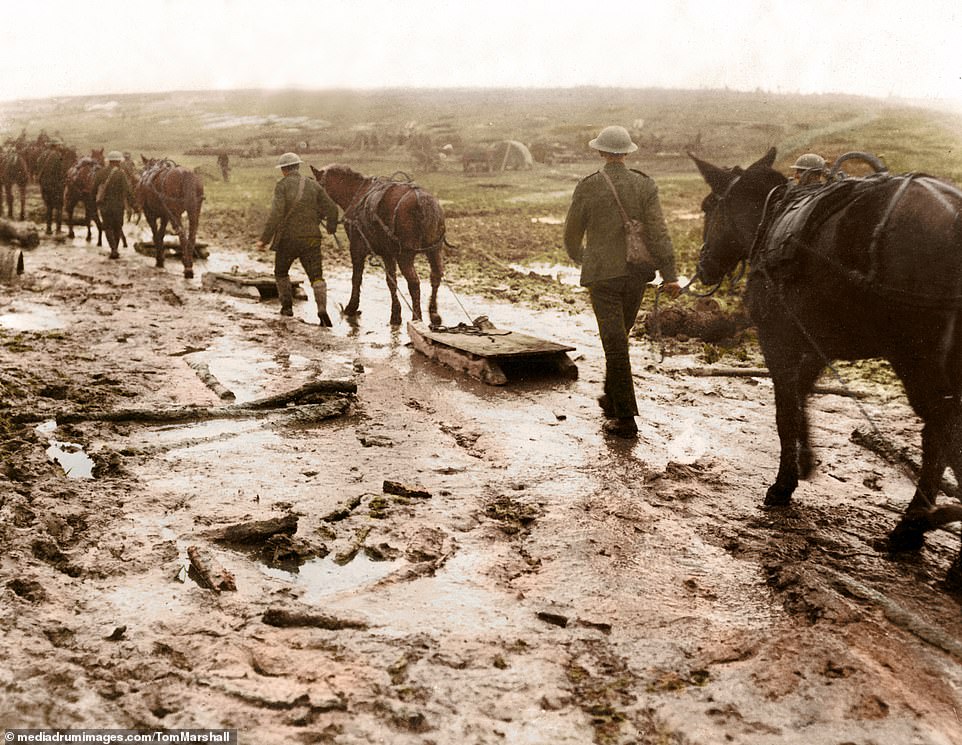 Horses pull makeshift sleds through the mud of the First World War. Horses, due to their reliability and ability to travel over most terrains, were crucial to transportation during World War I. 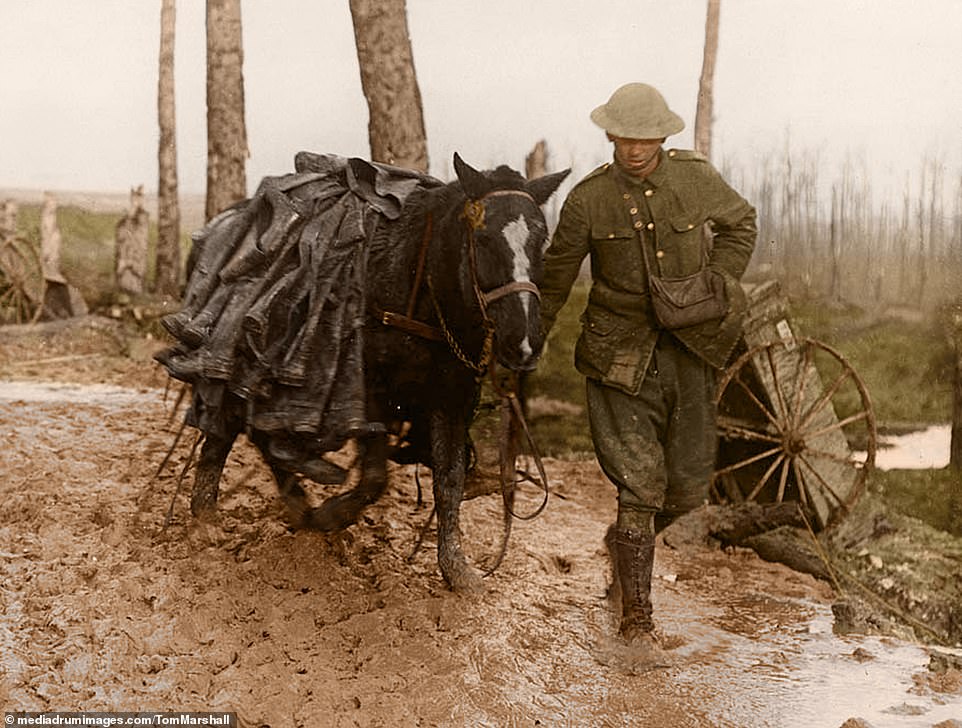 Pictured: A horse and soldier transporting boots along a path which is inches deep in wet mud. The horse is laden with rubber trench waders. 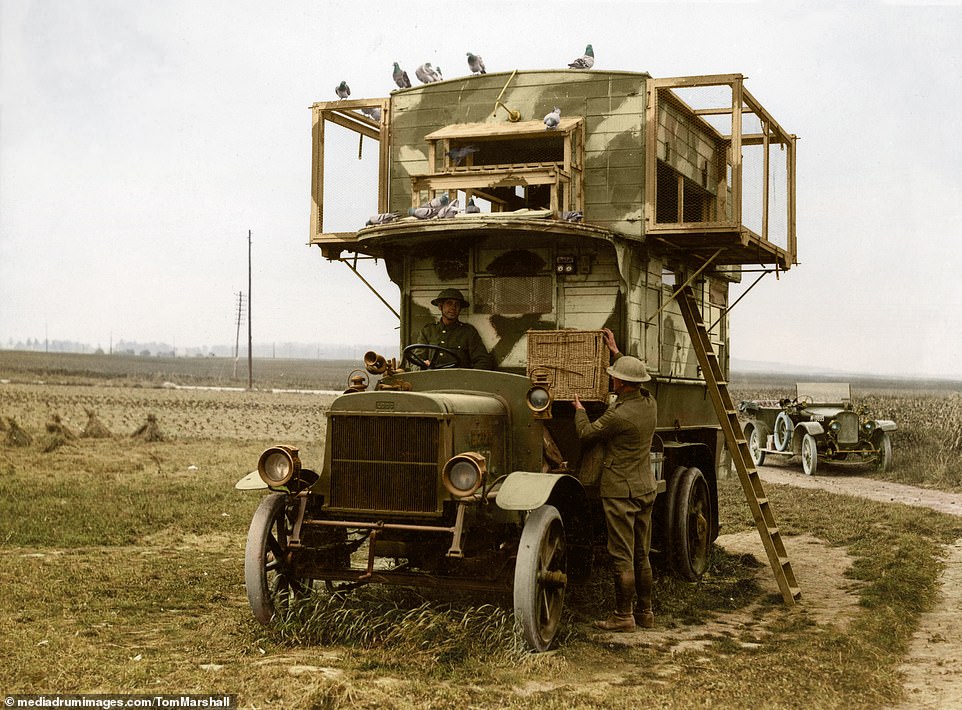 A B-type bus converted into a pigeon loft enabling messages to be sent from the front line back to headquarters. Over 100,000 carrier pigeons were used as messengers throughout WW1 and records show they delivered 95 per cent of their messages correctly.