By Chris Jewers For Mailonline

A gas leak at a Spanish nuclear power plant has left one person dead and three people in hospital, local emergency services said on Wednesday.

The carbon dioxide leak happened at the Asco nuclear power plant in the Spanish region of Catalonia. The plant is found around 80 miles west of Barcelona.

A fault in the plant’s fire prevention system caused the gas leak, which was not linked to any radioactive material, the regional fire service posted on Twitter. 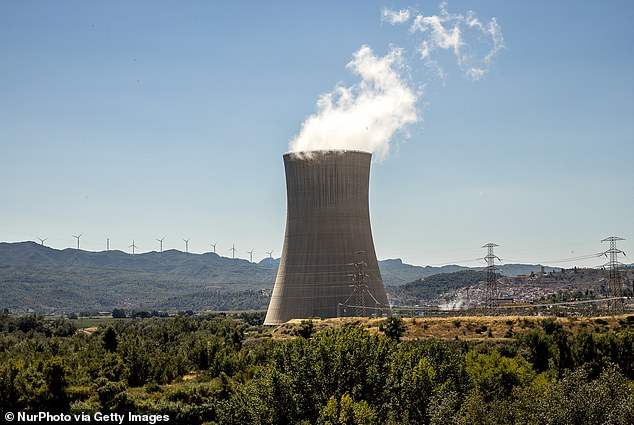 Pictured: The Asco nuclear power plant in the Spanish region of Catalonia, which was the site of a gas leak on Wednesday evening that saw one person killed and three others injured

According to the Spanish Elperiodico newspaper, the victim of the incident was a 42-year-old man from the nearby town of Mora d’Ebre. He was reportedly one of the firefighters that work permanently at the nuclear power station.

The local fire service wrote on Twitter that firefighters were alerted to a warning at the plant at 18:55 on Wednesday evening.

Shortly afterwards, the fire service said it was preparing to leave the site after checking over the extractor fans with the plant’s staff and ensuring the systems were working properly.

‘Together with the staff of the Ascó nuclear power plant, [Catalan firefighters] checked the extractors and checked the technical performance of the site, which are correct,’ the fire service tweeted on Wednesday night.

Sources from the Bombers de la Generalitat told Europe Press that the incident was linked to maintenance work.

‘At the moment in which the ignition occurs, the CO2 begins to leave and displace the oxygen, and once there is no oxygen the combustion ends. It is the way to put out fires in places where water cannot be used’, the sources said.