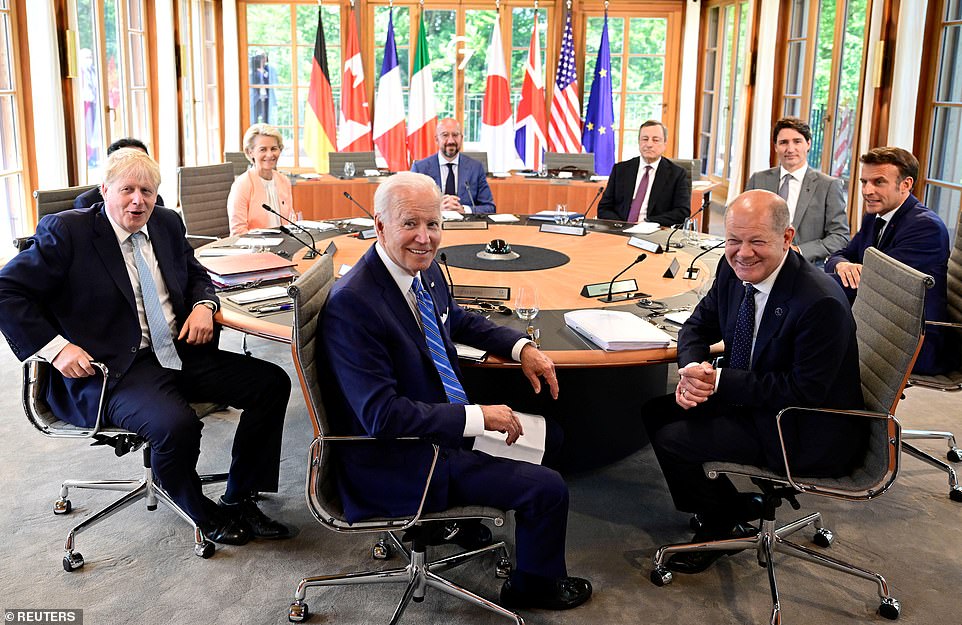 The leaders of the G7 mocked Russian President Vladimir Putin on Sunday as they sat down to lunch, joking about his infamous bare-chested horseback riding photo. Their laughter came as President Joe Biden is working to hold the western alliance in lockstep as the war in Ukraine entered its fifth month and Russia dropped bombs on Kyiv for the first time in weeks. ‘Jackets on? Jackets off? Shall we take our clothes off?’ British Prime Minister Boris Johnson asked as he sat down at the table with his fellow leaders of the world’s biggest economies. 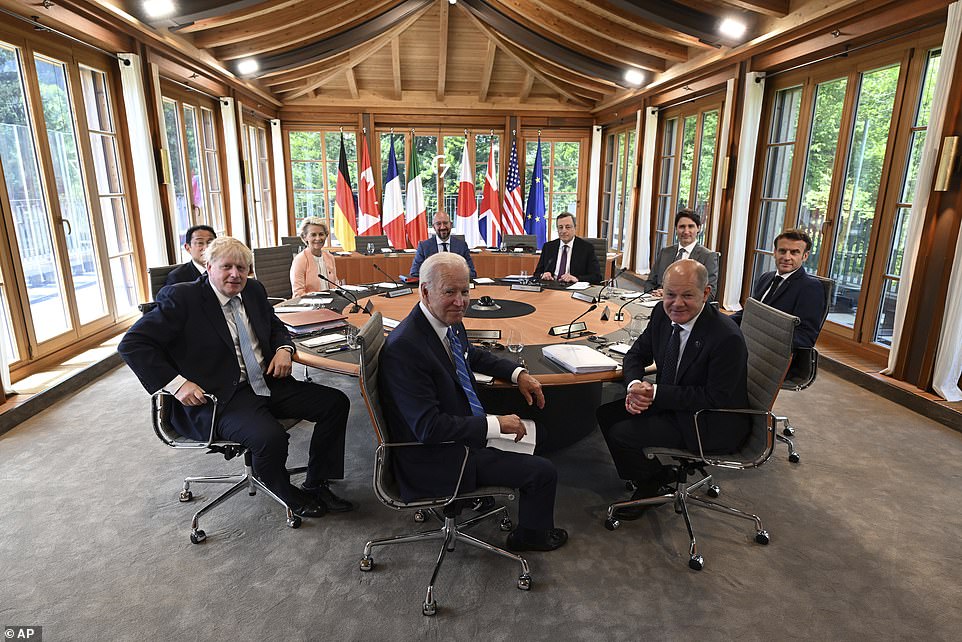 ‘Let’s wait for the picture,’ Canadian Prime Minister Justin Trudeau said. Officials were trying to take an official photo of the luncheon with the leaders of Canada, France, Germany, Italy, Japan, the United Kingdom, the United States and the European Union. ‘We have to show that we’re tougher than Putin,’ Johnson said. Trudeau then added: ‘We’re going to get the bare chested horseback riding display.’ 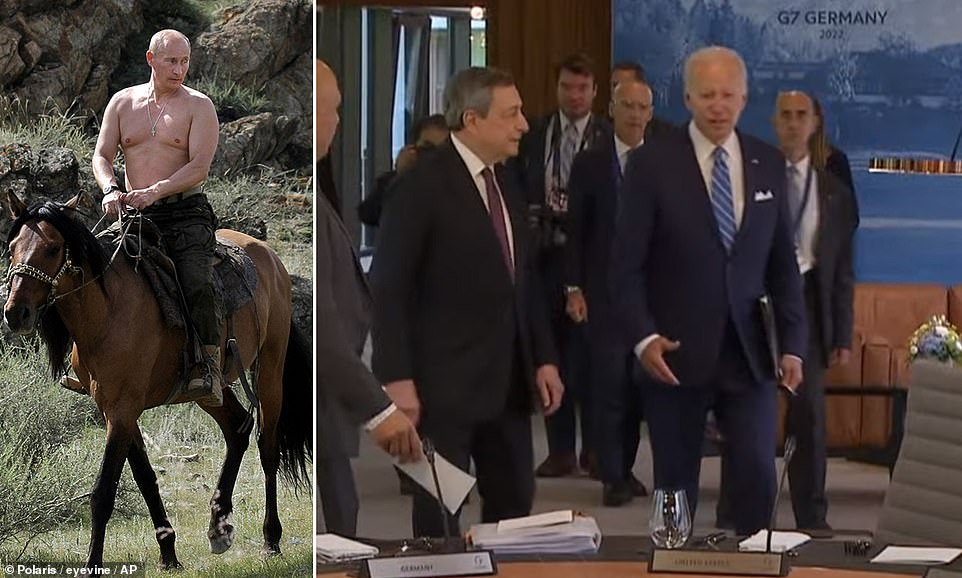 He was referring to a 2009 photo of a shirtless Putin (left) riding a horse in the mountains of the Siberian Tyva region during vacation (pictured). Johnson can then be heard on footage saying: ‘We’ve got to show them our pecs.’ ‘Horse back riding is the best,’ European Union President Ursula von der Leyen chimed in. President Biden was at the luncheon but didn’t appear to participate in the mocking. 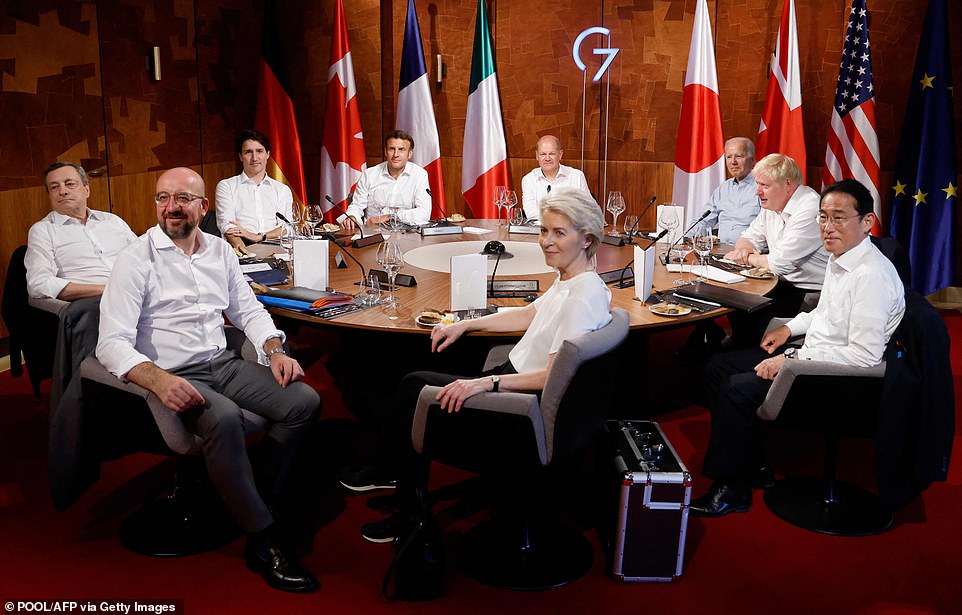 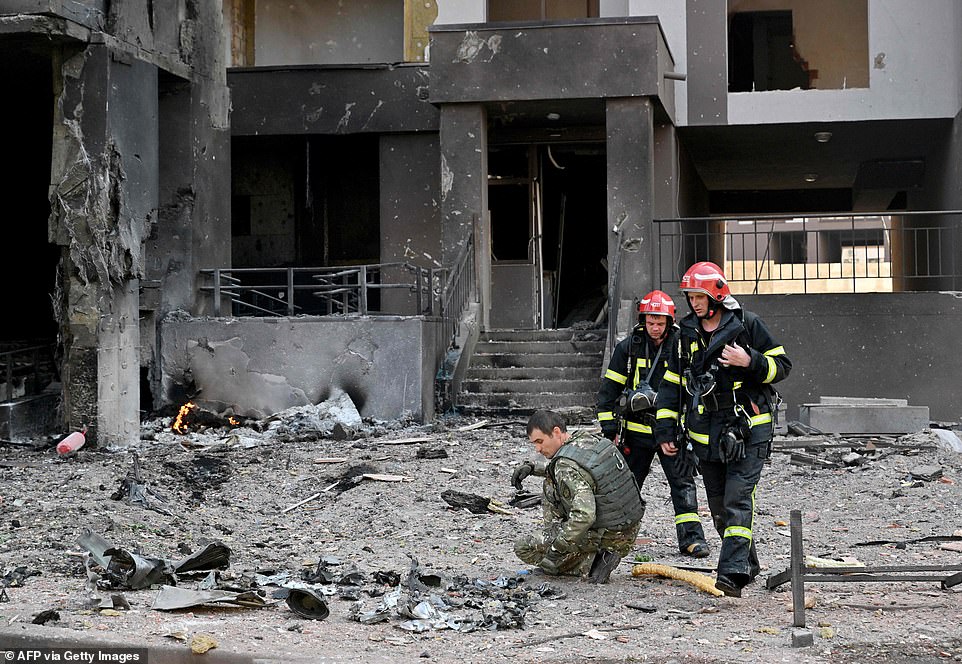 Russian forces attacked the capital of Kyiv for the first time in weeks, striking at least two residential buildings. Ukraine’s minister of foreign affairs Dmytro Kuleba tweeted a photo of a young girl being carried out of the rubble, strapped to a stretcher and being aided by emergency workers. Her father was killed and her mother was injured, according to local reports. ‘This 7 y.o. Ukrainian kid was sleeping peacefully in Kyiv until a Russian cruise missile blasted her home. Many more around Ukraine are under strikes. G7 summit must respond with more sanctions on Russia and more heavy arms for Ukraine. Russia’s sick imperialism must be defeated,’ Kuleba wrote on Twitter. Pictured: Ukrainian rescuers work on a residential building damaged by Russian missiles in Kyiv. 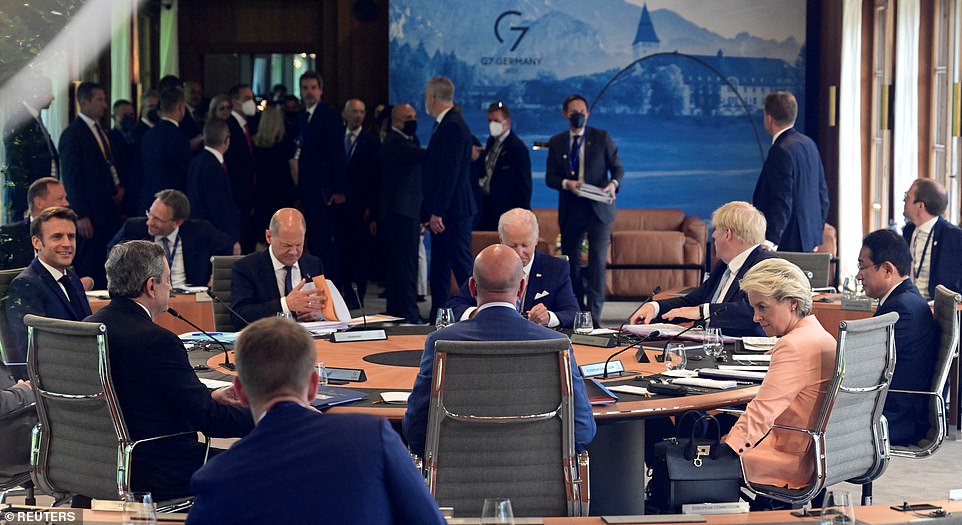 Culture minister Oleksandr Tkachenko told local media that a kindergarten was hit. Before Sunday’s attack, Kyiv had not faced any Russian airstrikes since June 5. Kyiv Mayor Vitali Klitschko told reporters in Kyiv that he believed the strike ‘is maybe a symbolic attack’ ahead of this week’s NATO summit in Madrid. Russia’s invasion of the Ukraine will be the main topics of discussion at this week’s G7 summit in Germany and NATO meeting in Madrid. As the fighting in Ukraine enters its fifth month, Biden is shoring up allies to hang in there for the long haul. He is pushing a message of unity in his meeting with leaders. And other leaders were mocking Putin as the G7 officials gathered for their official lunch. 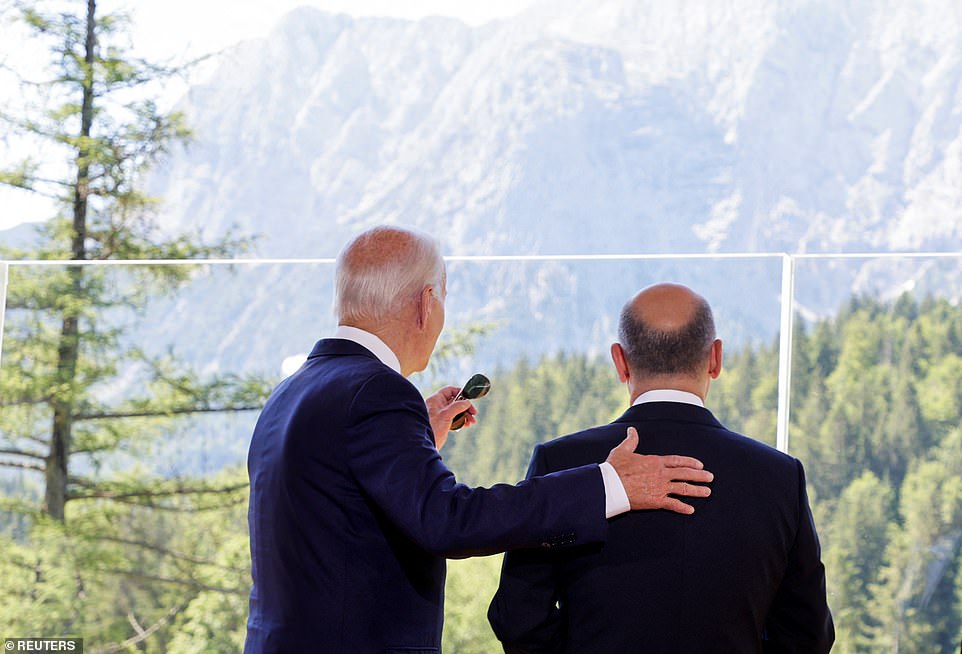 Biden, on Sunday, began his first day at the G7 summit by praising the German chancellor (pictured) and vowing unity among the alliance against the invasion of the Ukraine. ‘Thank you thank you… we have to stay together,’ he told Olaf Scholz as they looked out at the stunning mountain view at Schloss Elmau, the grand setting for the summit. ‘Because Putin is counting on from the beginning that NATO and the G7 would splinter. But we haven’t and we’re not going to.’ 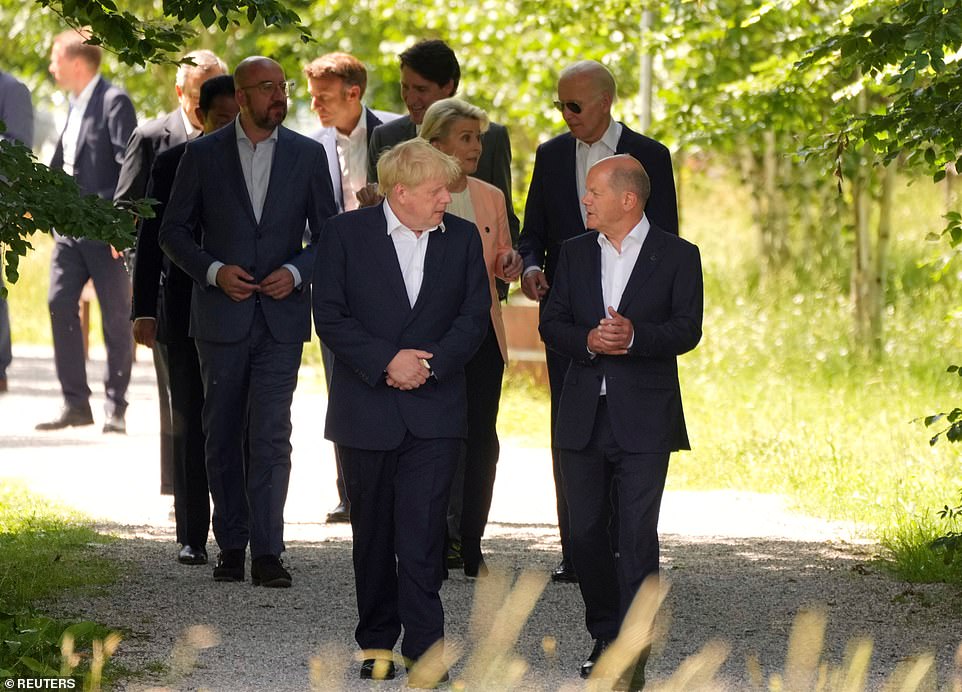 Russia and Ukraine will dominate the summit, as G7 leaders assess how well sanctions are working. They will also discuss the world’s worsening economic climate. Scholz (pictured front right) was waiting for Biden at a pavilion with panoramic Alpine views when Biden arrived on the decking. The two leaders took a moment to soak up the setting before sitting down to discuss the day’s agenda. ‘Don’t jump,’ Biden joked to Scholz when he saw him standing at the scenic deck overlook, the mountains visible in the distance. He removed his signature aviator sunglasses and shook Scholz hand, telling him ‘good to see you.’ ‘I used to ski too I haven’t skied in a while,’ continued Biden. ‘It’s beautiful.’ Then it was down to business. 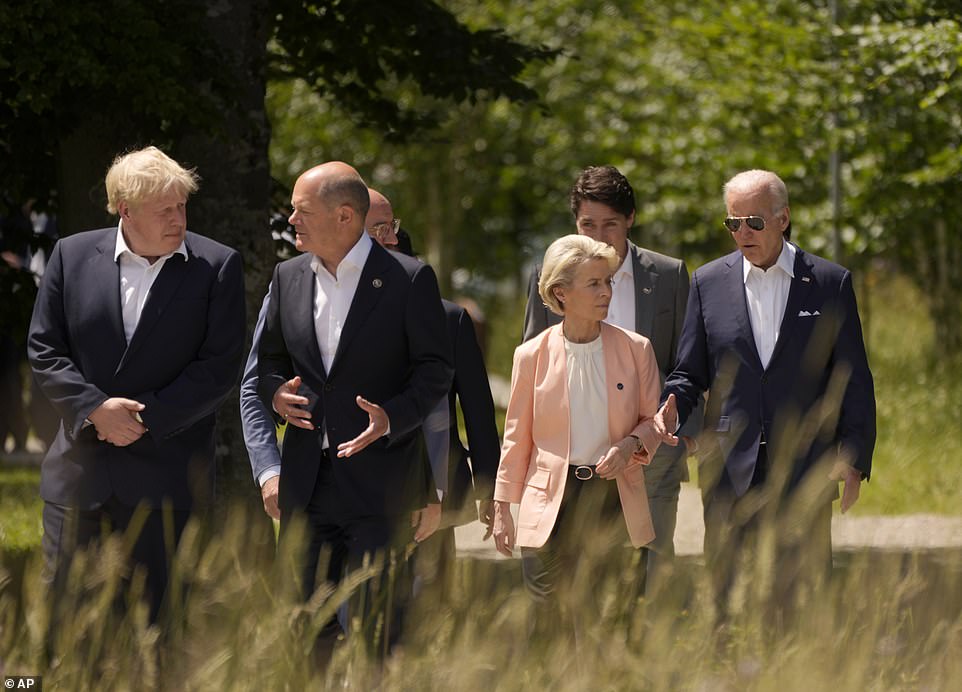 The president will spend the day in formal and informal meeting with the leaders of Britain, Canada, France, Germany, Italy, Japan and the European Union. Russia and its war in the Ukraine will ‘be at the top of the list’ of agenda items, a senior administration official said of the day. ‘We’re going to continue working on the economic challenges we face,’ Biden said. The fallout from the invasion tops most of the agenda. Ukraine President Volodymyr Zelensky virtually addressed the G7 on Monday. The first formal session for the leaders of the world’s seven largest economies was a discussion about the economy and the high food and gas prices that have resulted from both the invasion of the Ukraine and the world emerging from the Covid pandemic. 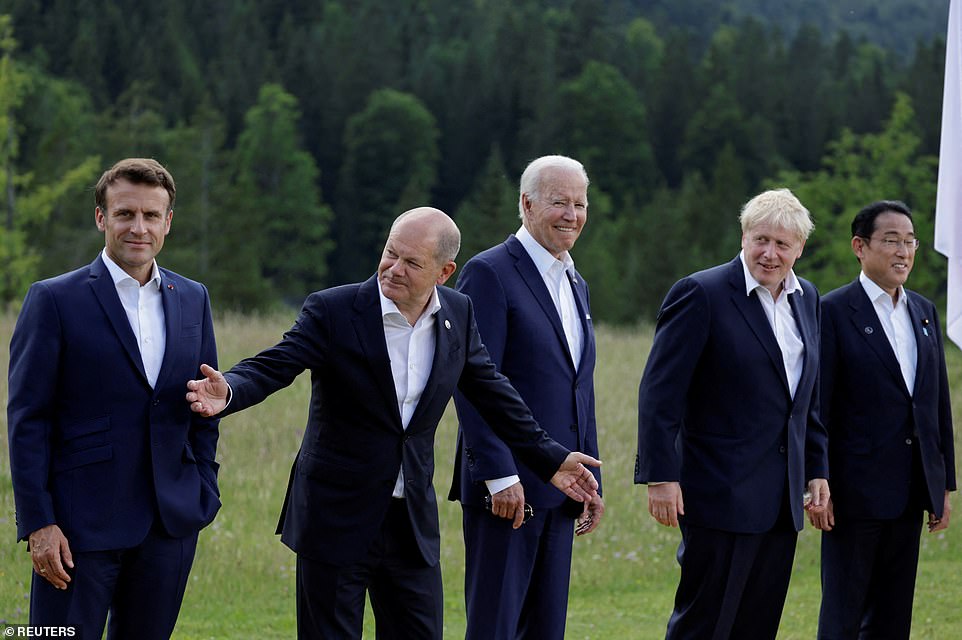 Like the United States, Germany, Canada and the United Kingdom are battling record-high inflation. ‘The disruptions generally that are emanating from Russia’s invasion of Ukraine, even as the leaders, including President Biden will be focused on the challenge and the challenges and disruptions of the moment,’ a senior administration official said on Sunday morning. Biden will also spend his time at the G7 – and at the NATO summit later this week – holding together the Western allies on Russian sanctions. The U.S., UK, Canada and Japan are implementing a new round of punishments on Russia President Vladimir Putin in an attempt to isolate him financially. 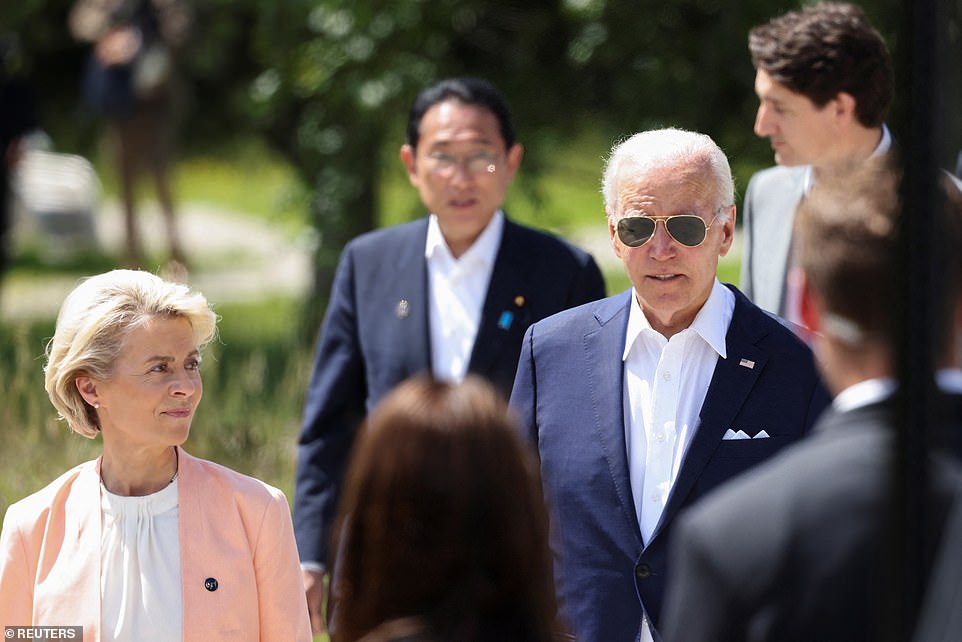 The countries are banning the import of Russian gold, which, after oil, is its biggest revenue generator. ‘The United States has imposed unprecedented costs on Putin to deny him the revenue he needs to fund his war against Ukraine,’ Biden wrote on Twitter. ‘Together, the G7 will announce that we will ban the import of Russian gold, a major export that rakes in tens of billions of dollars for Russia.’ The West has already imposed a series of sanctions on Russian oil, luxury goods and other items. But questions remain as the effectiveness of those financial punishments. 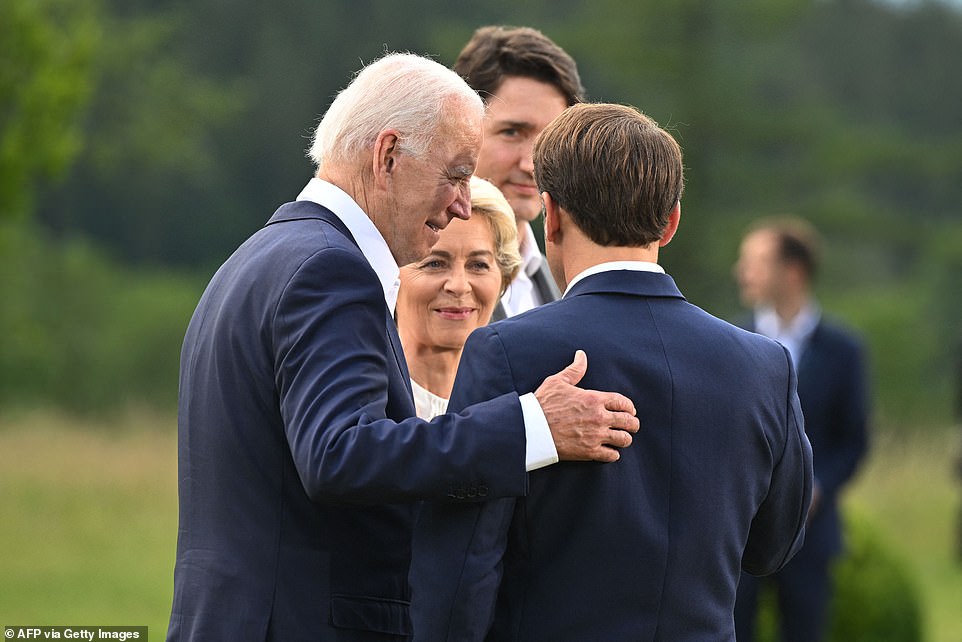 ‘The short-term financial impact of the sanctions on Russia’s economy has been substantial but appears to have dissipated since May,’ the Center for Strategic and International Studies reported this month. And Russian oil, the nation’s biggest source of income, is still being purchased – China and India are picking up the slack left when the U.S. and allies started to ban Russian oil. While oil sales are down, prices are up, helping generate billions for Putin’s war. 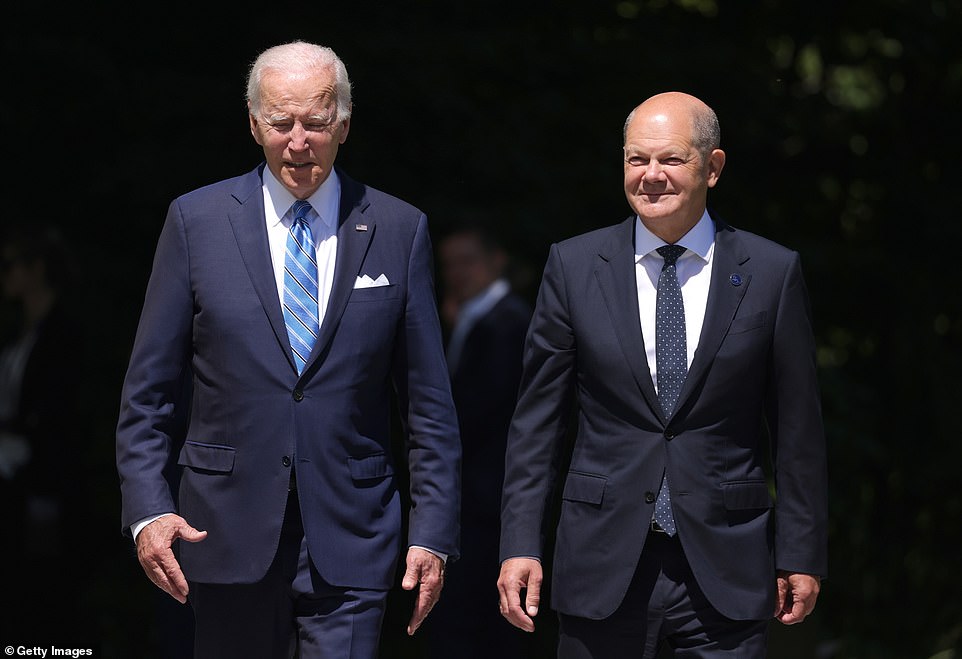 Russia is still raking in $1 billion a day from its oil supply, the Center for Research on Energy and Clear Air found. The Biden administration argues the sanctions are working. ‘The US has rallied the world and imposing swift and significant economic costs. It will deny Putin revenue he needs to finance his war. In this case, gold after energy is the second largest export for Russia and a source of significant revenue for for Putin and Russia,’ a senior administration official said. 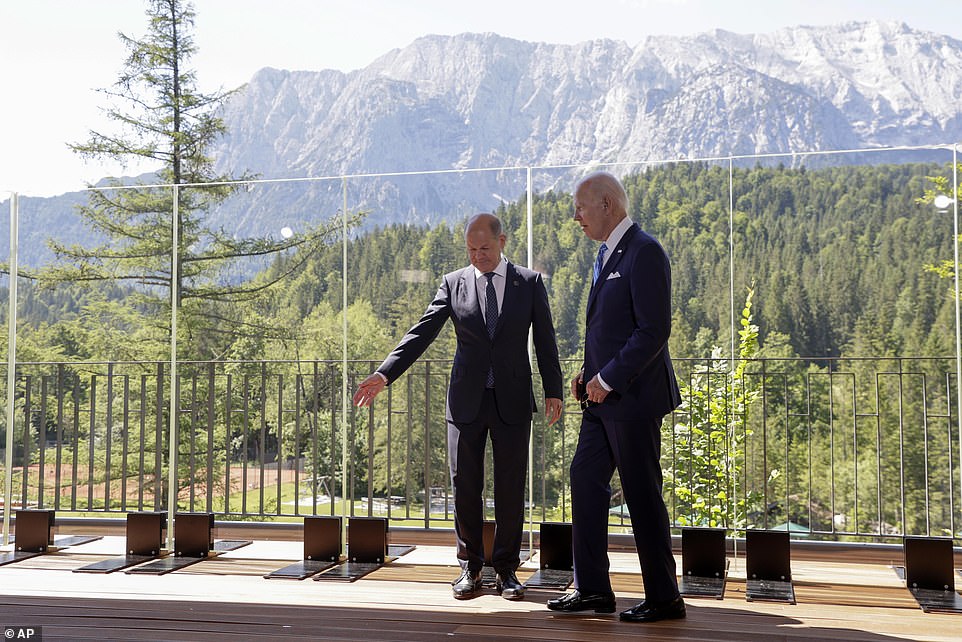 The official went on to say the effect of the sanctions ‘ is intended to be cumulative, not just in the moment, and we’re already seeing the extent to which sanctions are degrading the productive capacity of the Russian economy, particularly in sectors like technology, like defense, like other key important industries, and those impacts only accumulate over time such that Russia’s ability to wage war are going to decline over time as a result of the collective steps that the G7 has taken.’ 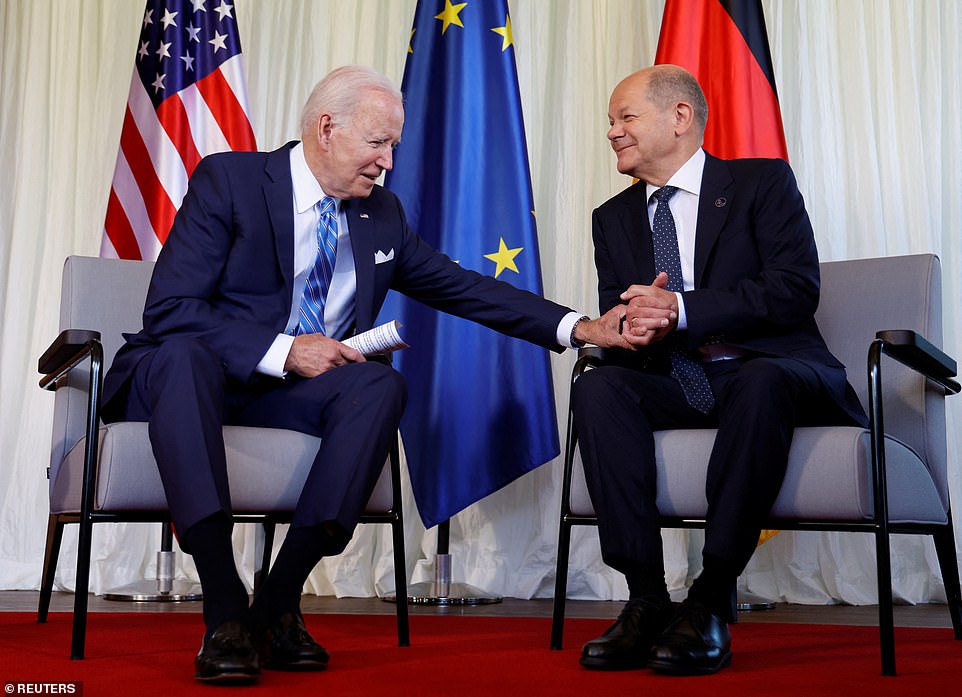 Biden’s days will be spent in meetings, including lunches and dinners with G7 leaders. He’ll also participate in an official welcome ceremony and take a family photo. The president arrived in Germany on a Saturday night to a red carpet welcome – complete with flags flying and a band playing. A large group of people in traditional Bavarian dress greeted him, along with Bavarian Prime Minister Markus Soder. Two children, also in traditional dress, gave hm a bouquet of flowers. Biden also signed the Golden Book of the Bavarian state government. He’s pictured here with German Chancellor Olaf Scholz.

Germany Miracle as missing boy, 8, is found in sewer a WEEK after vanishing from his parents’ front garden English Headline