As Liverpool prepares to face Real Madrid in the Champions League final on Saturday, fans will be looking to their charismatic manager Jurgen Klopp in the hope of realising their dreams of European glory.

Klopp, 54, in turn, will be relying on the support of his wife, Ulla Sandrock, the woman he credits with guiding some of the biggest decisions in his career.

German-born Ulla , 47, is a former social worker and novelist who met her future husband at Munich’s Oktoberfest in 2005, where she was working as a waitress.

Known as The First Lady of Bundesliga in her home country due to her charity work in both Germany and Kenya, Ulla has embraced her adopted home of Merseyside and become a favourite with locals.

The couple, who live in Steven Gerrard’s former home in the affluent seaside suburb of Fromby, frequent restaurants and pubs in a fuss-free fashion and during lockdown Ulla quietly handed out £1,000 in £50 vouchers to staff at Waitrose to thank them for working during the pandemic.

There were no cameras present and, according to recipients, she didn’t want any thanks. It was simply a small way to give back and do something good.

It is difficult to imagine some other Premier League WAGs behaving in such a publicity-shy manner. 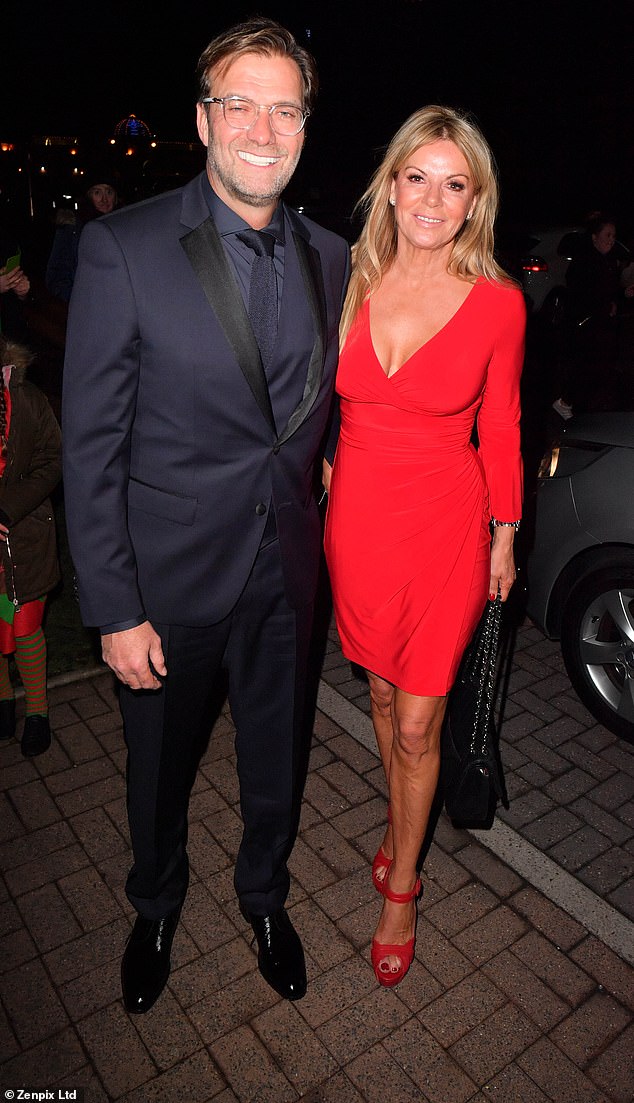 Klopp’s right-hand woman: German-born Ulla, 47, is a former social worker and novelist who met her future husband at Munich’s Oktoberfest in 2005, where she was working as a waitress 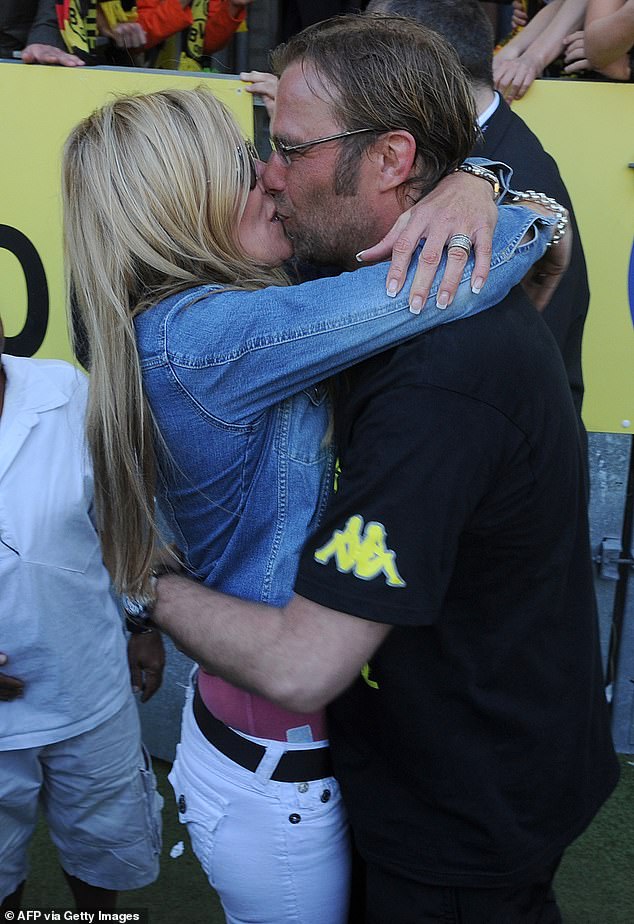 Pucker up! Jurgen and Ulla share a kiss on the pitch following Borussia Dortmund’s Bundesliga victory in 2011. The Liverpool manager credits his wife with helping him make major decisions 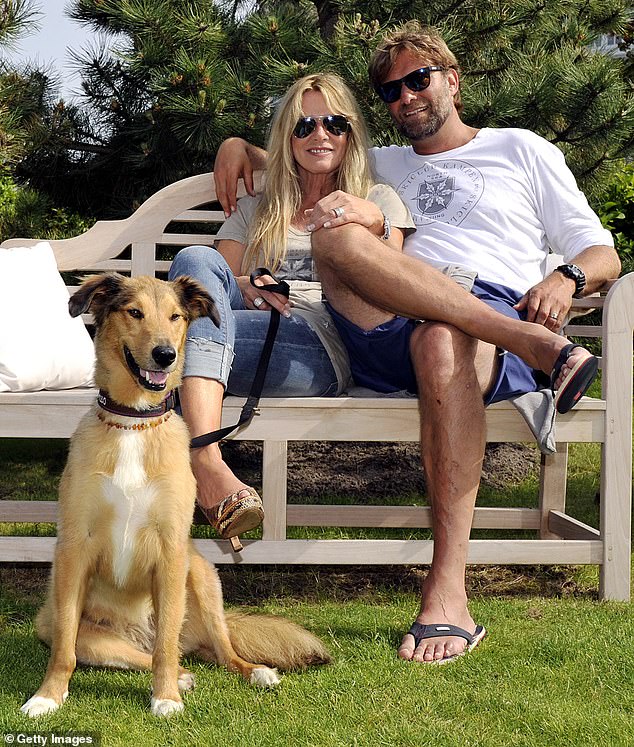 Low-key life: Mr and Mrs Klopp with their dog Emma in Kampen, Germany, in 2013. The couple moved in together just three days after meeting and married two months later 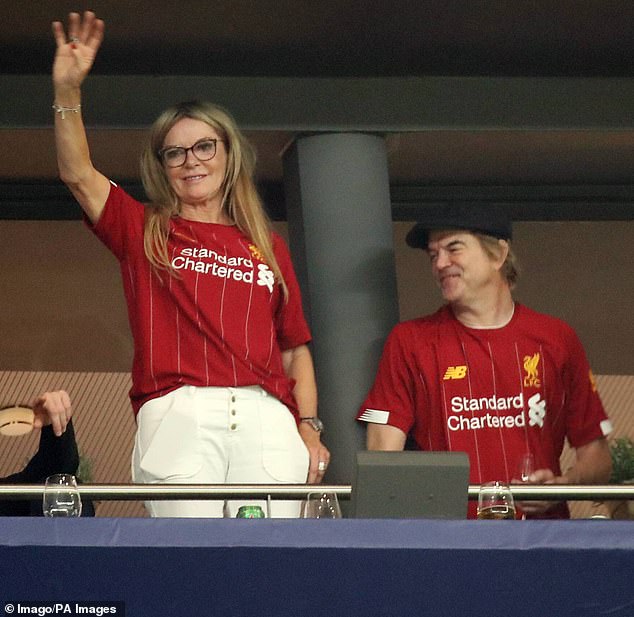 No. 1 fan! Ulla was in the stands to cheer on Liverpool in the 2019 Champions League final against Tottenham Hotspur. She is an ardent supporter of her husband’s teams 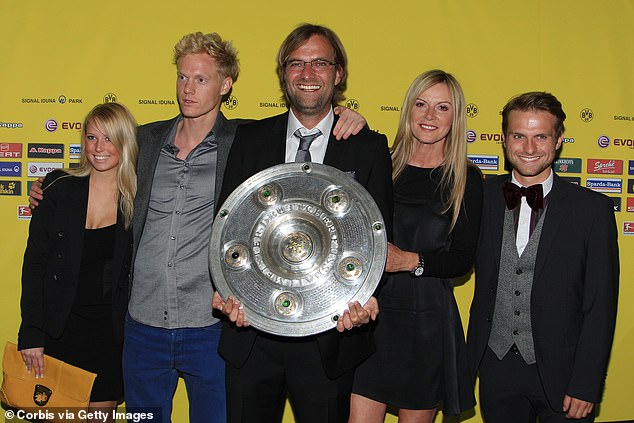 Blended family: Jurgen and Ulla both had sons from previous relationships when they met in 2005. Pictured, the couple (centre) with Ulla’s son Dennis (left) and Jurgen’s son Marc (right)

The headline-grabbing antics of Rebekah Vardy, Coleen Rooney et. al., which were thrust back into the spotlight during the Wagatha Christie trial, couldn’t be further removed from the low-key life of Mrs Klopp who – gasp! – doesn’t even have an Instagram account.

She even looks different from the ultra-glam footballers’ wives, keeping her blonde locks loose and unstyled and opting for minimal makeup and pared back outfits, even on big occasions.

Little is known about Ulla’s early years, but she shares a son, Dennis, with a previous partner. Jurgen became Dennis’ stepfather, while Ulla is stepmother to Jurgen’s son from a previous marriage, Marc.

Incredibly, she and Jurgen – a 6ft 2in player-turned-manager known as something of a football heartthrob – moved in together after knowing each other for just three days, before tying the knot on December 5, 2005.

The couple have no children together, but love their 11-year-old retriever cross Emma, named after the Borussia Dortmund striker Lothar Emmerich.

With both having been through a divorce, and children being involved on either side, it is unsurprising that Jurgen and Ulla hit it off from the get-go.

Ulla worked as a teacher and hospital worker in Nairobi for three years, before settling in Mainz, western Germany, where Jurgen was living too, working as the manager of the city’s football club, Mainz 05.

This is where Jurgen also spent most of his playing career – as a striker and a defender, before retiring in 2001 and becoming manager. 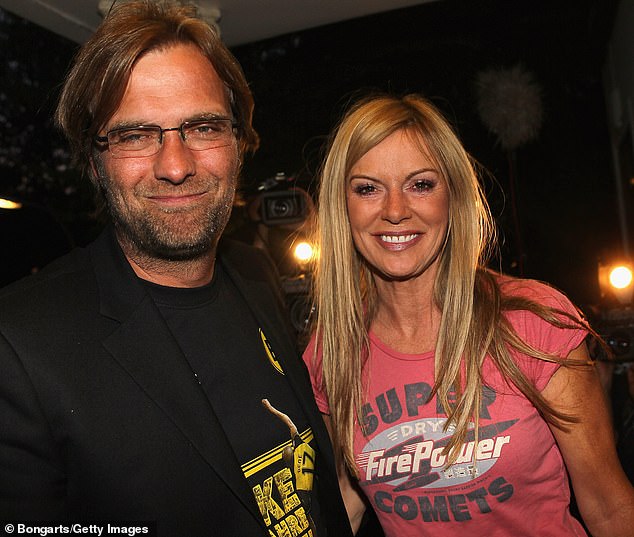 Fresh-faced: Jurgen and Ulla joined in the celebrations after he led Borussia Dortmund to victory in the Bundesliga, Germany’s equivalent to the Premier League, in 2011 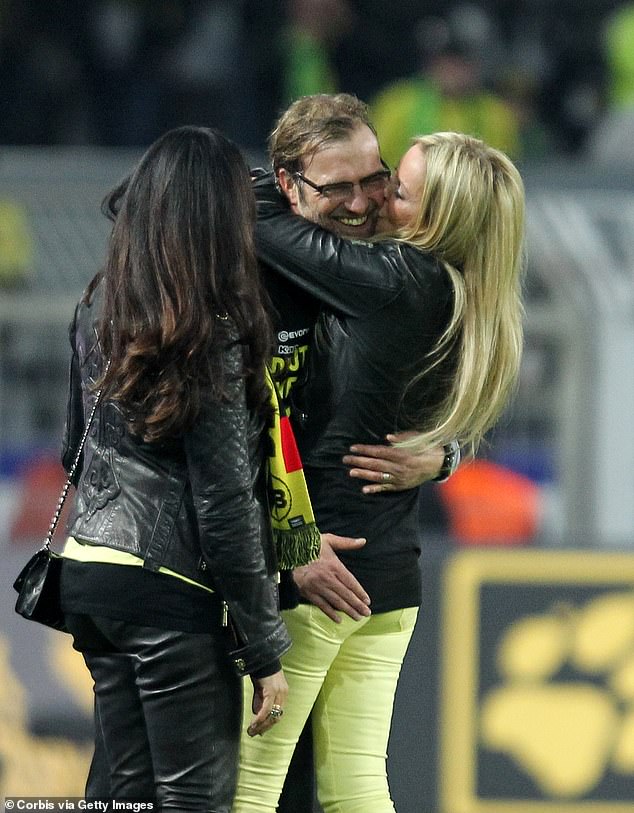 Cheeky! Jurgen embraced his wife in an amorous moment following the Bundesliga win. The couple avoid similarly public displays of affection at Anfield and stay largely out of view 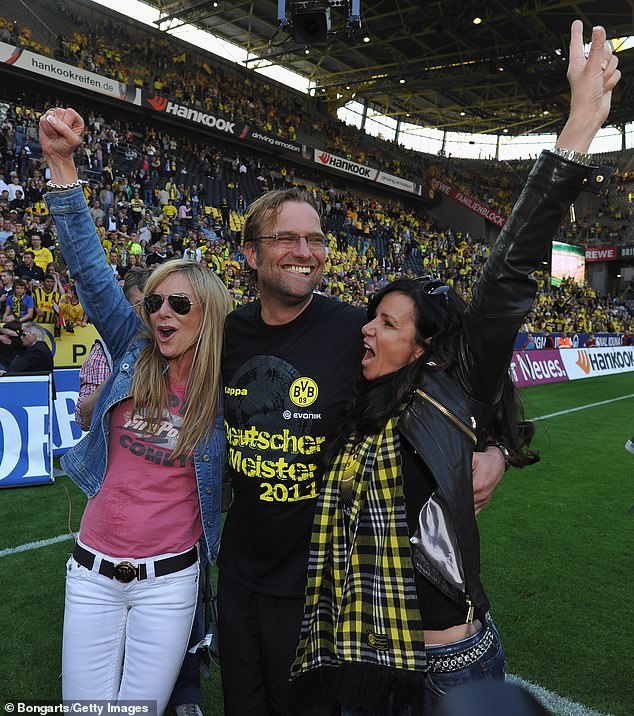 Time to celebrate! Beaming manager Klopp had his arms around Ulla, left, and a friend as they took a victory lap following Dortmund’s Bundesliga win in 2011 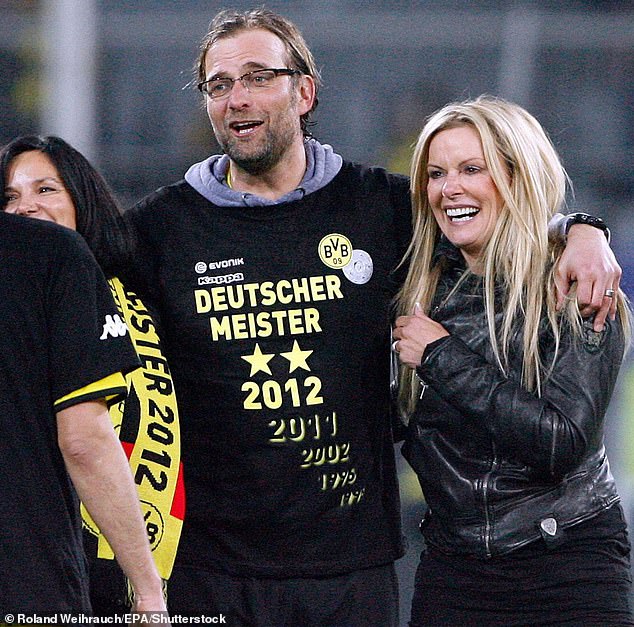 By his side: Ulla was by Jurgen’s side at Mainz, then Borussia Dortmund, and finally Liverpool. Pictured, the couple following Dortmund’s Bundesliga win following the 2011-2012 season

He orchestrated Mainz’s promotion to the Bundesliga, the German equivalent to the Premier League, in 2004, before resigning in 2008 as the club’s longest-serving manager.

Ulla was by Jurgen’s side at Mainz, then Borussia Dortmund, and finally Liverpool.

The pair moved to Formby in 2015, where the average house price is £170,000. Victoria Road, in the Freshfield area of the town, has been home to multiple great footballers and managers over the years.

It is the most expensive street in Merseyside, with the average house costing £1million.

When Steven bought the home in 2005, it was the biggest house to be built in Formby for 90 years, boasting three living rooms, seven bedrooms, a home cinema, an indoor swimming pool, and a landscaped garden. 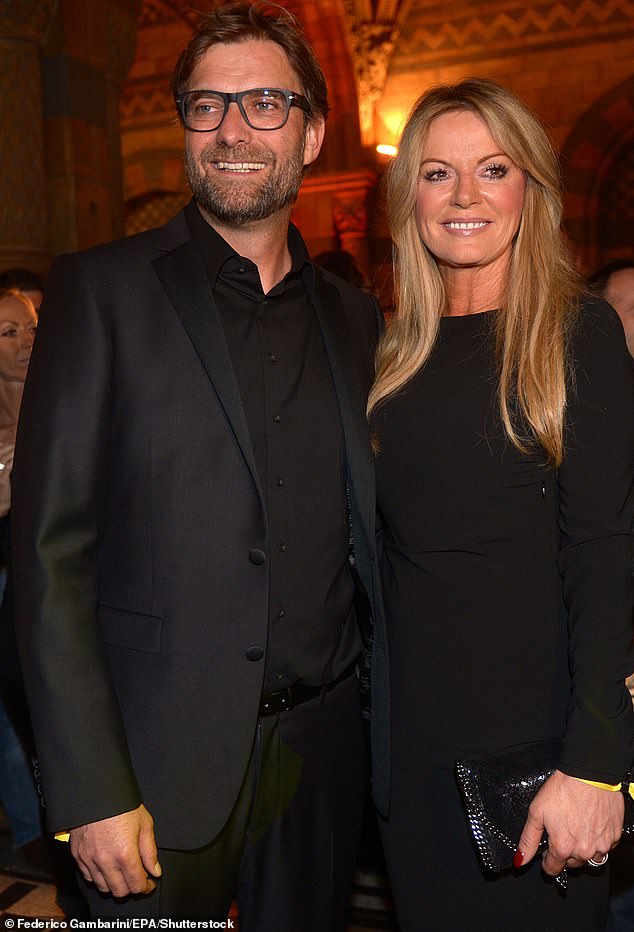 All dressed up: Ulla accompanied her husband to a party at the Natural History Museum in 2013, two years before they moved to the UK when he took on the job at Liverpool 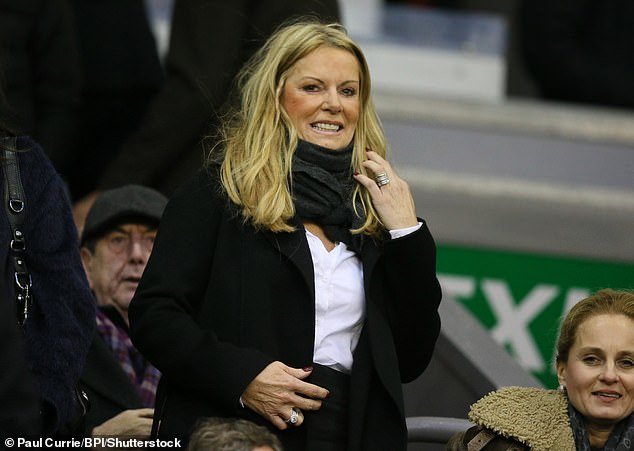 Low-key: Ulla Sandrock takes her seat during a match at Anfied in November 2015. The 47-year-old keeps her look pared back even at big events, favouring natural hair and makeup 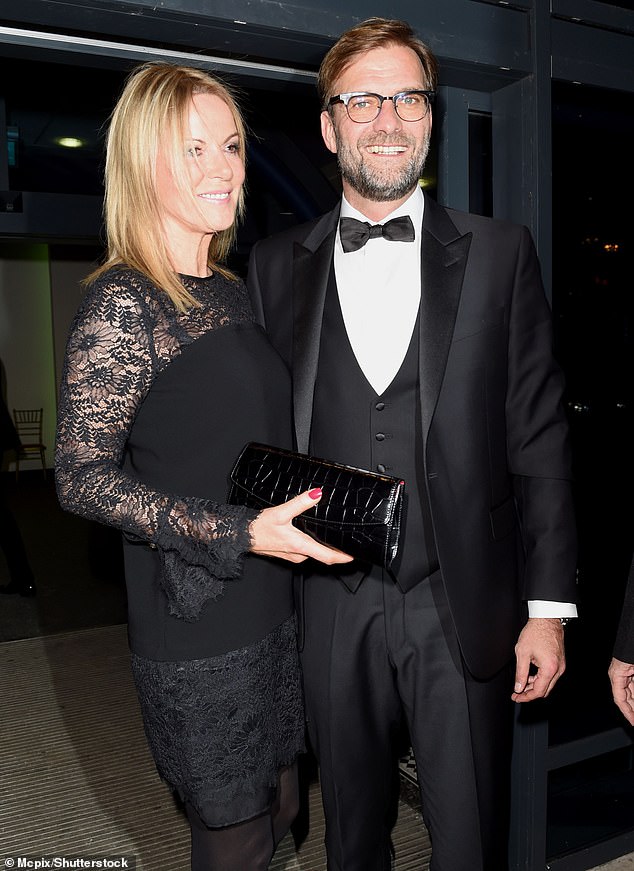 Out on the town! Jurgen Klopp and his wife turned out to support James Milner’s charity event in November 2016. Klopp said Ulla helped him decide to extend his contract at Liverpool

Ulla won the hearts of locals in April 2020 after she handed out £1,000-worth of £50 food vouchers to staff at their nearby Waitrose as a ‘thank-you’ for working through the pandemic.

One member of staff told the Liverpool Echo at the time: ‘This was an incredible thing to do. Ulla didn’t want to make a fuss, or receive any recognition, and just wanted people working in shops to get the recognition they deserve.’

She became a hero in the eyes of many Liverpool supporters this year when it emerged she had been integral in her husband’s decision to sign another two-year contract at the club.

Jurgen wrote on Liverpool’s Twitter at the time, explaining how his decision to stay hugely involved his wife. He said: ‘There’s something to announce. Like last time some will like it, some will not like it too much. If you don’t like it, stop watching now.

‘I stay for another two years… and only me. No, all my coaches will as well, which is the most important actually.

‘Why? Is now the question. Because Ulla wants to stay and as a good husband what are you doing when your wife wants to stay? You are staying.’ 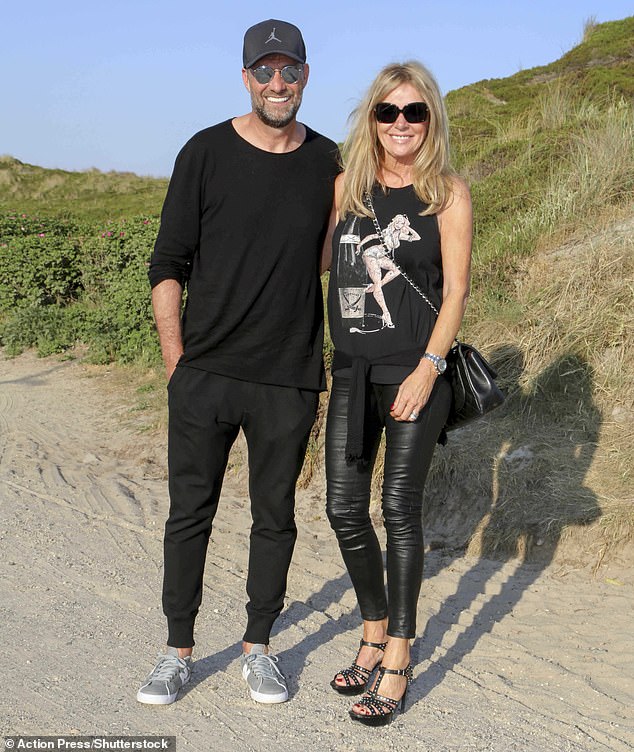 Getting away from the game: The couple have a holiday home on Sylt, a picturesque island off Germany’s North Sea coast. Pictured, the couple on the island in May 2018 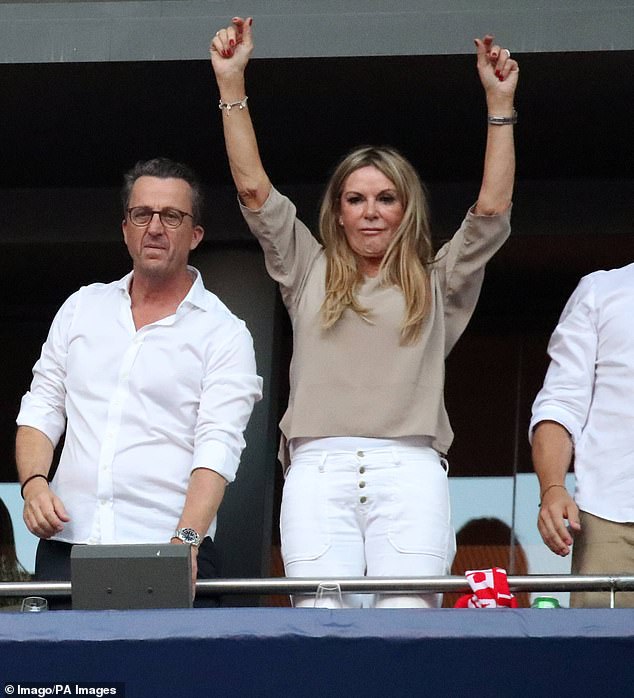 The manager added: ‘The most important contract I signed in my life was the one with Ulla. And that’s why it start again, because actually we sat at the kitchen table and Ulla said “I can’t see us leaving in 2024”.

‘I said “what?”. That’s how it all started and when that started I thought “let’s have a think”.

‘When I thought about it it was clear that I needed to have one more really important conversation, that’s the one with Pep Lijnders, because he is probably the main reason for it, and our connection is beyond football things. When he said “oh yes, I’m in”, then it was clear that we are open for any kind of talks, and that’s why we’re sitting here now.’

‘Ulla said to Jurg you know / she doesn’t want to leave you know / I’m in love with her and I feel fine.’

Ulla is often seen at Anfield, watching her husband’s team from the stands and cheering the players on.

In 2019, the smiling blonde was pictured in a crowd standing on a bin and waving her arms as a red bus carrying the team drove through the swarming city following their Champions League win, their first in 30 years.

The multi-talented Ulla is a novelist too. Ulla has written two children’s books about football: Elli and Pit, published in 2008, and its sequel, Tom and the Magic Football, published in 2010.

While Ulla is supportive of Jurgen’s career, he is of hers too – when asked about his wife’s writing in 2015, the manager said: ”It’s like Harry Potter but about football. There’s no Harry Potter flying on his f****** stick – just football.’

Although Ulla and Jurgen have no plans to leave Formby any time soon, the couple have a holiday home on Sylt, a picturesque island off Germany’s North Sea coast.

This is where the Klopps let their hair down, usually seen walking Emma on one of the island’s sandy beaches.

But it’s clear they aren’t afraid of a little adventure either. According to local vet Stephanie Petersen, who shared the incident in a book about her work, Emma almost swallowed a stinging jellyfish while swimming off the island’s coast seven years ago.

Stephanie wrote: ‘Jurgen pulled out a brown dog poop bag and emptied an entire jellyfish, blue and wobbly, onto my table, followed by about half a kilo of sand.

‘Ulla told me that she bravely reached into the dog’s throat to pull the jellyfish out by the tentacles.’

Ulla, once again, making an important decision and coming to the Klopps’ rescue.